A single New York City nursing home has lost nearly 100 residents to coronavirus, with the elderly dying in such numbers that the facility had to bring in a refrigerated trailer to store the overwhelming number of bodies.

Officials at the Isabella Geriatric Center, in Manhattan’s Washington Heights, revealed Friday that 46 residents who tested positive for COVID-19 had died, along with 52 others suspected of having the virus. The center had 705 residents, meaning the deaths accounted for nearly 14 percent of its capacity.

The huge death toll was first reported by local cable news station NY1, which said it represented the largest nursing home cluster by far in New York state. The report also revealed that due to delays in overstretched funeral homes being able to pick up the dead, the center had brought in a refrigerated trailer in which to store bodies and concealed the trailer behind tarps hung on the center’s fence.

A spokeswoman for the center told the Associated Press that an early lack of testing capacity had hurt their efforts to effectively respond to the outbreak by isolating infected residents.

“Isabella, like all other nursing homes in New York City, initially had limited access to widespread and consistent in-house testing to quickly diagnose our residents and staff,” Audrey Waters wrote in an email. “This hampered our ability to identify those who were infected and asymptomatic, despite our efforts to swiftly separate anyone who presented symptoms.”

She said the center had also had staffing shortages and difficulty obtaining PPE for employees, but that the situation has improved.

Government officials collect coronavirus death data from nursing homes, but that hasn’t yet provided a clear picture of the situation in each facility, because some facilities do not count suspected cases who die without being tested. There are clearly issues with the reporting system: the same day the Isabella Geriatric Center revealed it had had 98 deaths, the New York state tally listed only 13 coronavirus deaths in total at the center.

The center told AP it “could not speculate” as to the reasons for the discrepancy, saying it had “truthfully and accurately reported” its death toll to state officials. The discrepancy between the figures prompted U.S. Rep. Adriano Espaillat (D-N.Y.) to send a letter New York Gov. Andrew Cuomo and Attorney General Letitia James Friday, calling on them to investigate the reporting of COVID-19 deaths in the state’s nursing homes further.

With coronavirus proving especially deadly to the elderly, and especially those with underlying medical conditions, nursing homes around the world have been hotspots for deaths. In hard-hit U.S. states like New York, New Jersey, and California, as well as in Britain, officials have been criticized for ordering nursing homes to accept recovering — but still potentially infectious — COVID-19 patients who have been discharged from hospital, in a bid to free up much-needed hospital beds.

In New York, the hardest-hit U.S. state, there have been more than 3,000 deaths in nursing homes so far, and at least six facilities with clusters of 40 deaths or more. More than 80 residents at a veterans’ home in Massachusetts, the Soldiers’ Home in Holyoke, have reportedly died from the virus.

And in Italy, police have launched a criminal investigation into Milan’s largest care home, after at least 190 residents died and about 200 staff were infected with the virus.

In response to the Isabella outbreak, de Blasio said city officials were doing everything they could to help, including providing thousands of respirator masks to the facility, but that changes needed to be made to the way such facilities operated during the pandemic.

“The one thing we now know about the nursing homes is the status quo cannot continue to say the least,” de Blasio said. “Something very different has to happen.”

Cover: Mayor Bill de Blasio thanks the Interfaith team for its tireless dedication fighting COVID-19 at Interfaith Medical Center in Brooklyn, New York, on May 1, 2020. (Photo by Gabriele Holtermann-Gorden/Sipa USA)(Sipa via AP Images) 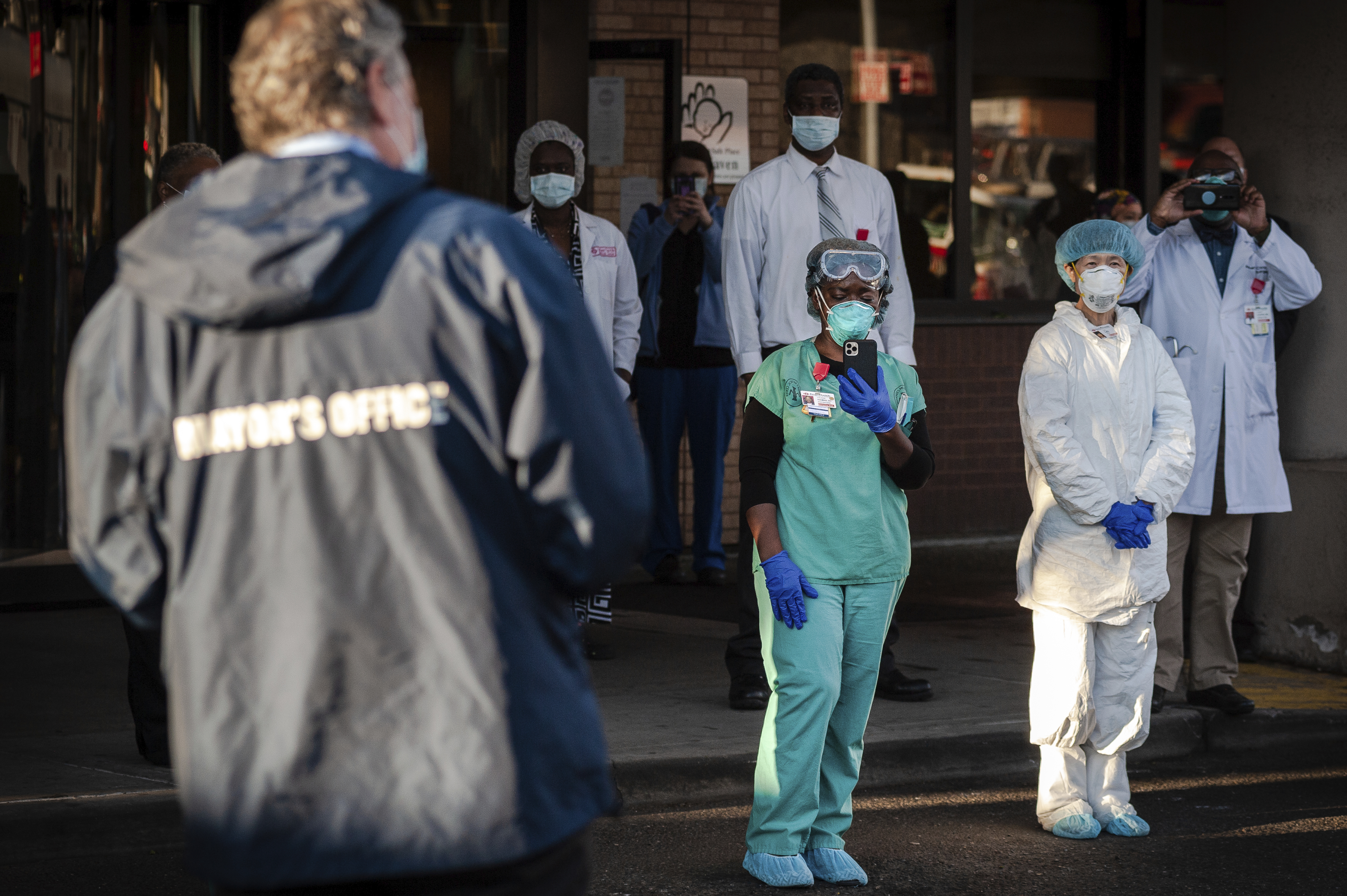 Where to Spend Valentine’s Day 2020