The word Lorgnette is derived from the French word lorgner – meaning “to ogle” or “to eye furtively,” and that’s the precise function of the glasses. American luxury brand Harry Winston exceeds the expectation by reimaging the Lorgnette, this time with diamonds and emeralds.

The 1953 musical film Gentlemen Prefer Blondes had the song “Diamonds Are a Girl’s Best Friend” which includes the spoken interjection “Talk to me, Harry Winston, tell me all about it!” Harry Winston is a name of unparalleled artisanal expertise, exceptional designs, and a true luxury experience. He immigrated to the United States with his mother and was only twelve years old when he recognized a two-carat emerald in a pawn shop, bought it for 25 cents, and sold it two days later for $800. Starting his business in 1920 and Winston opened his first store in New York City in 1932. His designs resonated with not only the celebrity and socialite circle but the public in general, and he came to be known as the ‘King of Diamonds.’ The master craftsman donated the Hope Diamond to the Smithsonian Institution in 1958 after owning it for a decade. Despite a decade long battle for control over the company after Harry Winston’s demise, the contribution of the brand to the jewelry industry cannot be undermined. From high jewelry to timepieces, exquisite and intricate craftsmanship is the core of the brand that it lives by to date. A piece from the company’s recent collections was a marvel to look at and a wonderful imagination. 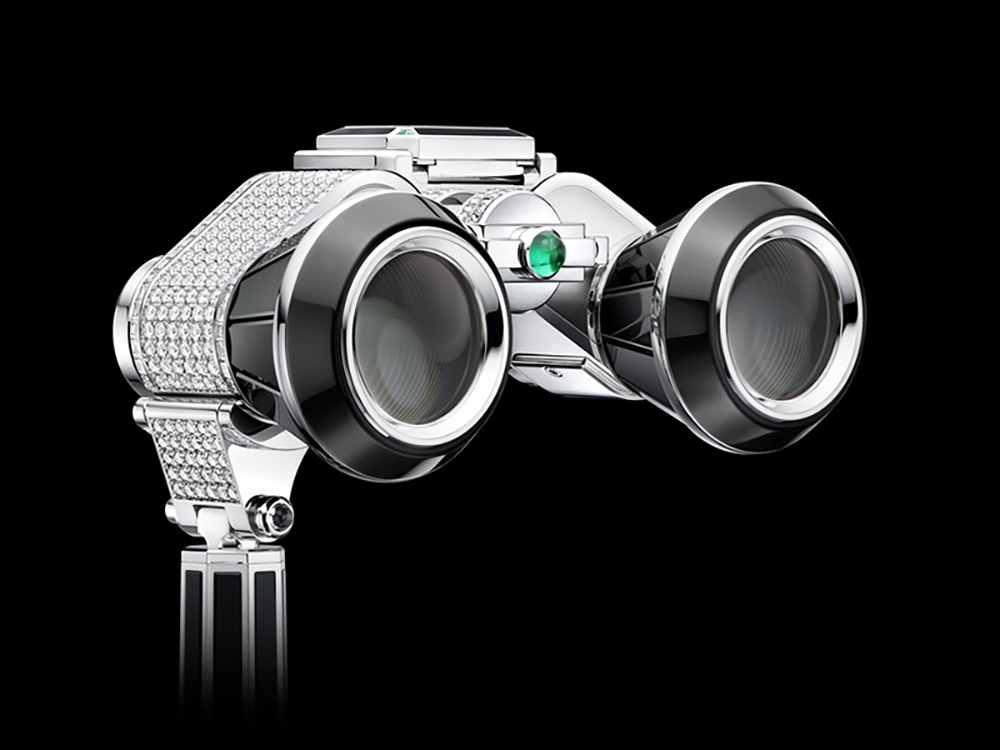 Dating back to the 18th Century, lorgnettes are pair of glasses or binoculars with a handle to hold them in place rather than fitting over the ears or nose. The concise and portable structure of the Lorgnette allowed made it an instant hit among the socialites for having a better spectacle of the operas. The glasses were used predominantly by the elite to look closely during the show, steal a glance of a prospective spouse, and even keep an eye on foes. Though with films and other forms of entertainment taking the main stage, the lorgnettes haven’t lost their charm. Along with operas, the Lorgnette also became a part of Broadway shows masquerade balls and dances and changed its shape and form over time. The latest version was a rather special one – the Broadway glasses by Harry Winston.

Inspired from the 1930’s Broadway shows from the founder’s hometown, New York, and the Art Deco Movement, the master craftsmen at Harry Winston, surpassed every barrier to create a piece that is a true work of art and completely functional. The Broadway glasses are a monumental re-imagination of the classic Lorgnette with the bold, geometric design of the Art Deco spirit. The glasses are available in white gold and titanium completely covered in stunning diamonds, emeralds, and black onyx that give it a chic and feminine accessory. The binoculars’ case is encrusted with six rows of 240 brilliant-cut diamonds and two rows of 80 baguette-cut diamonds never forgoing the functionality. Even the lorgnette handle has been crafted with meticulously precision. Made of 18-karat white gold, the telescopic handle features a tapered octagonal shape and can be detached and attached whenever required. It is decorated with a combination of 30 brilliant-cut and 14 baguette-cut diamonds alongside the onyx to have a true luxury moment. The Lorgnette also has a small wheel below the timepiece, which is used to adjust the focus of the lenses, encrusted with 70 baguette-cut diamonds to match the Harry Winston charm.

But there’s much more the Lorgnette has to offer. At the bridge of the binoculars is an octagonal white gold watch taking inspiration from the emerald cut diamonds along its sides. With over 48 baguette-cut diamonds, the watch is bordered by a black onyx frame with eight emeralds at every corner. The swift and smooth movement of the quartz watch adds another functional aspect to the reimagined Lorgnette. This marvel of art is further astonishing as the press of a small button allows the watch case to pop so that the time can be set. To add the cherry on this extravagant cake, the bottom of the handle holds the company’s pristine emerald shaped in white gold.

The beauty of the Broadway Glasses by Harry Winston goes above and beyond expectations, with ingenious mechanical movements and expertly hidden beneath the dazzling exterior the timepiece is a fabulous amalgamation of beauty and functionality.

Would Greta Thunberg’s generation play with these toys?

Coronavirus: Fewer loans approved as firms rush to get lifeline