The Department of Justice is considering bringing federal hate crime charges against the father and son accused of murdering Ahmaud Arbery when he jogged down their street in late February.

The DOJ’s statement follows the Georgia attorney general’s call for a federal investigation into the way local authorities handled the killing of the 25-year-old black man.

“We are assessing all of the evidence to determine whether federal hate crimes charges are appropriate,” Kerri Kupec, a Justice Department spokesperson, said in a statement. “We will continue to assess all information, and we will take any appropriate action that is warranted by the facts and the law.”

Just last week, state authorities said there would be no hate crime charges brought in the case against the two men, Gregory McMichael, 64, and his son Travis McMichael, 34, because Georgia doesn’t have a hate crime law on the books.

Now, the feds are looking into whether federal hate crime laws are applicable.

The case had been stalled for months, until the video of the killing emerged last week, showing two men in a truck coming up to Arbery as he jogged down the middle of a tree-lined road near Brunswick, Georgia, the driver getting out and tussling with him and then shooting him dead. The McMichaels weren’t charged, at least in part because of an obscure Georgia “citizen’s arrest” law that allows civilians to intervene if they witness a crime.

READ: It only took 36 hours before state investigators knew they had to arrest Ahmaud Arbery’s killers

It’s unclear what crime the two men would have witnessed. Arbery was caught on video walking onto a construction site moments before the men pursued him in their truck and killed him.

“We are committed to a complete and transparent review of how the Ahmaud Arbery case was handled from the outset,” Attorney General Chris Carr said in a news release Sunday. “The family, the community, and the state of Georgia deserve answers, and we will work with others in law enforcement at the state and federal level to find those answers.”

The potential federal charges are the latest development in the Arbery case, which exploded into national view when the video footage went viral last week. Here’s what else is happening:

The Georgia Bureau of Investigations announced over the weekend that it’s reviewing new video footage that appears to show Arbery walking onto a construction site moments before he was killed.

The video footage, obtained by local CBS News affiliate News4Jax, shows Arbery walking into the site, looking around, and walking out.

A statement from the family’s attorney said that the video confirms that Arbery was just on a jog when he was killed.

“This video is consistent with the evidence already known to us,” Lee Merritt, an attorney for Arbery’s family, along with his co-counsels Benjamin Crump and L. Chris Stewart, said in a statement. “Ahmaud Arbery was out for a jog. He stopped by a property under construction where he engaged in no illegal activity and remained for only a brief period.”

“Ahmaud did not take anything from the construction site,” the statement continued. “He did not cause any damage to the property.”

The guy who shot the video says he’s cooperating

The man who shot the video that shows Arbery’s killing told the news station that he was in “complete shock” after he filmed it..

“I have never been involved in anything like that before,” William Roddy Bryan said.

Arbery was shot on Feb. 23, but no arrests were made in his death until after the video leaked to the public. But despite witnessing what turned out to be a violent and fatal confrontation, Bryan didn’t intervene, nor did he call 911. The video was shot from a car driving behind the men who shot Arbery on the side of the road.

“I had nothing to do with it,” he told WJAX. “I am trying to get my life back to normal, and it’s been smeared for the last week. Um, I was told I was a witness and I am not sure what I am.”

Asked why he didn’t intervene, Bryan let his attorney answer for him.

“My client was responding to what he saw, which was someone in the community he didn’t know being followed by a vehicle he recognized,” said Bryan’s attorney, Kevin Gough. “Without going into details about the level of crime in this community, in this subdivision, I think most people in this subdivision were aware that there were issues.”

The district attorney who recused himself from the investigation defended his decision to forgo an investigation in the Arbery case.

On the day of the killing, the Glynn County police department sought advice on how to proceed from the Brunswick District Attorney’s Office. The DA there, George Barnhill, told the police that the killing was a “justifiable homicide,” according to the statement from Glynn County officials obtained by the Brunswick News.

Barnhill also said in a letter dated from early April that, based on Arbery’s autopsy and the video footage, that he saw no reason to issue an arrest warrant for either the McMichaels or Bryan.

“We do not see grounds for an arrest of any of the three parties,” the letter reads.

Barnhill was the second of three district attorneys who were appointed to the case before it was turned over to the feds. The first of them recused herself from the case because Gregory McMichael had been an investigator in the District Attorney’s office, and the DA had worked with him. Barnhill handed the case over to a third DA, at the request of Arbery’s family, who then turned the case over to the state-level authorities.

Within 36 hours of taking on the case, the Georgia Department of Investigations arrested the McMichaels on felony murder and aggravated assault charges.

“We are pleased that Georgia AG Chris Carr has officially asked the Dept. of Justice to investigate the handling, and potential cover-up, of Ahmaud Arbery’s murder,” the attorneys for Arbery’s family said in a statement. “There are far too many questions about how this case was handled and why it took 74 days for two of the killers to be arrested and charged in Mr. Arbery’s death.”

Cover: This photo combo of images taken Thursday, May 7, 2020, and provided by the Glynn County Detention Center, in Georgia, show Gregory McMichael, left, and his son Travis McMichael. The two have been charged with murder in the February shooting death of Ahmaud Arbery, whom they had pursued in a truck after spotting him running in their neighborhood. (Glynn County Detention Center via AP) 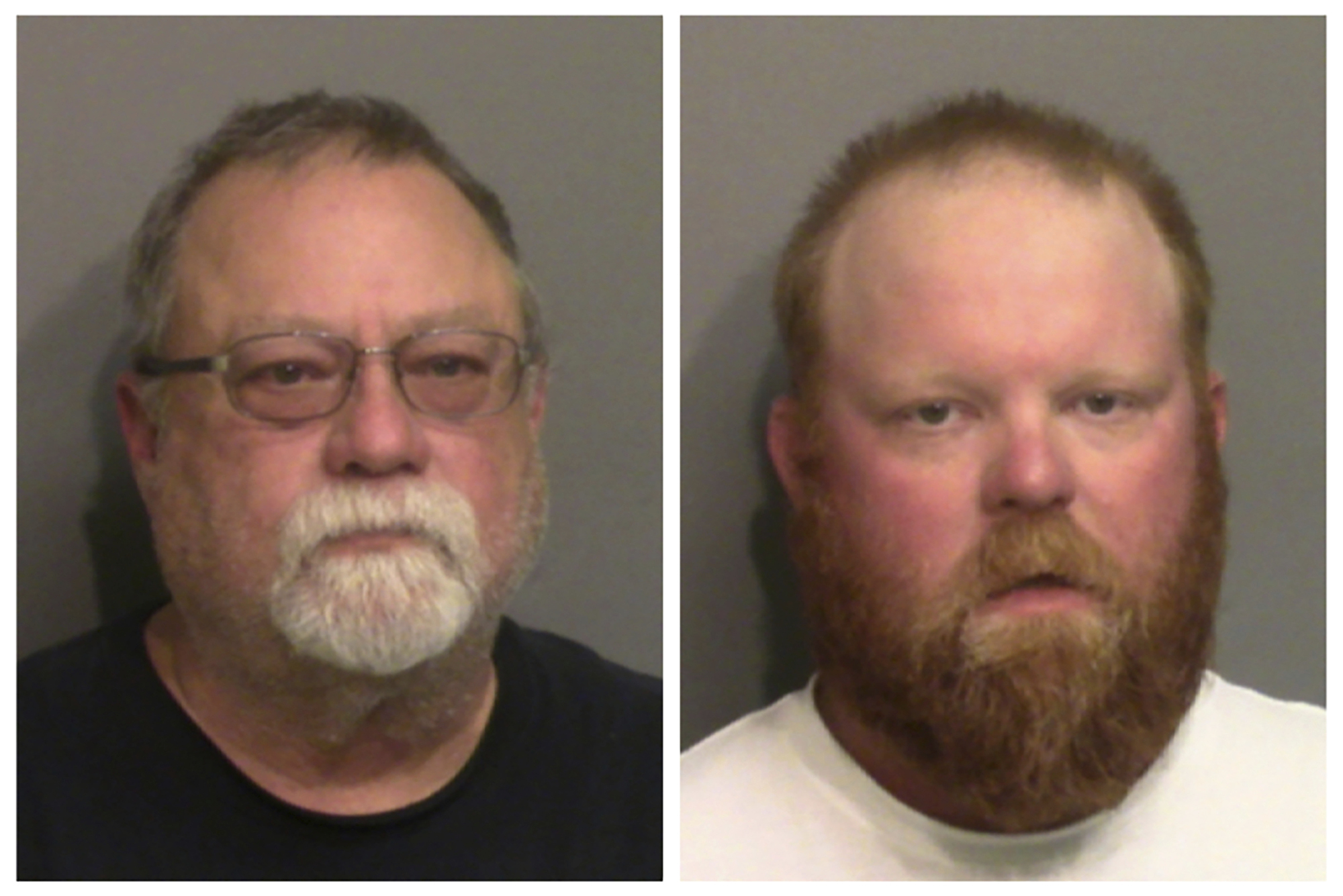