The Los Angeles man seen in a viral video getting repeatedly punched — and allegedly spat on — by a police officer is now suing the city over the incident, which apparently stemmed from a trespassing allegation.

Richard Castillo and his dog “Mamas” are a fixture in LA’s Boyle Heights neighborhood where, for years, they’ve resided in a tent on a vacant lot without much trouble, according to the lawsuit he filed in a Los Angeles federal court Monday. So Castillo was terrified and confused when LAPD cops tried to approach him in the lot on April 27, shouting at him that he was trespassing on the private property where he had long lived.

Worried, Castillo began to walk away from the officers toward his cousin’s home, where he was raised, just a few steps away, when police ordered him to stop. Concerned bystanders looked on as Castillo turned toward a fence and awaited their approach. Then, once the officers had Castillo’s hands behind his back, one of them began to repeatedly punch him in the face as bystanders cried out, according to the lawsuit.

The incident was captured in a video from a resident of the majority-Latino neighborhood and quickly went viral across social media. The video prompted outrage from community advocates and an internal investigation from the Los Angeles Police Department. The officer involved has been placed on home duty, although frustrated civil rights leaders have demanded that criminal charges also be filed against the officer, who hasn’t yet been publicly named. For his part, Castillo is asking for damages in a lawsuit filed Monday. He’s represented by civil rights attorney Wesley Ouchi.

The viral video shows one uniformed officer continuously punching Castillo in the face, head, and body as he crouches down, still holding onto the fence. At one point, the officer visibly tosses something to the ground, which may have been his body-worn camera, according to the lawsuit. The officer allegedly spat in Castillo’s face. The other responding officer didn’t intervene for more than 20 seconds. Two other officers show up toward the end of the 59-second video to arrest Castillo.

“Based on the facts that were available to the Officers at the time of their assault, which is largely illustrated by this third-party video evidence, it was objectively unreasonable to apply this level of force upon Mr. Castillo, who was facing away from Officers, with his hands down, behind his back, while detained,” Ouchi wrote in an email to VICE News.

The city attorney’s office did not immediately respond to a VICE News request for comment Tuesday.

David Winslow, an attorney for the officer, told the Los Angeles Times on Monday that his client was threatened by Castillo, justifying the use of force. Winslow said in an email statement to VICE News that the body-worn camera footage has not yet been released, but it will “demonstrate that Mr. Castillo is a liar.”

The lawsuit also alleges that the officer was previously involved in three officer-involved shootings, one of which resulted in a death.

The officer received “minor injuries to his hand” during the incident, according to a Los Angeles Police Department statement about the incident, while Castillo had abrasions on his face and head, for which he refused treatment.

Castillo didn’t fight back the officer’s attack, according to his attorney, but nonetheless was “terrified for his life, and was experiencing substantial pain and suffering.”

He was transported to a local jail that day and kept overnight. Officers apparently wanted to transport him to another facility so he could be criminally charged and prosecuted, according to the lawsuit, although other officers determined he should be released without pending charges.

The incident comes after a string of Los Angeles-based, officer-involved shootings. Last month, officers shot and killed a man who had an “edged weapon.” An off-duty LAPD officer was also arrested this month for allegedly shooting another officer during a camping trip. 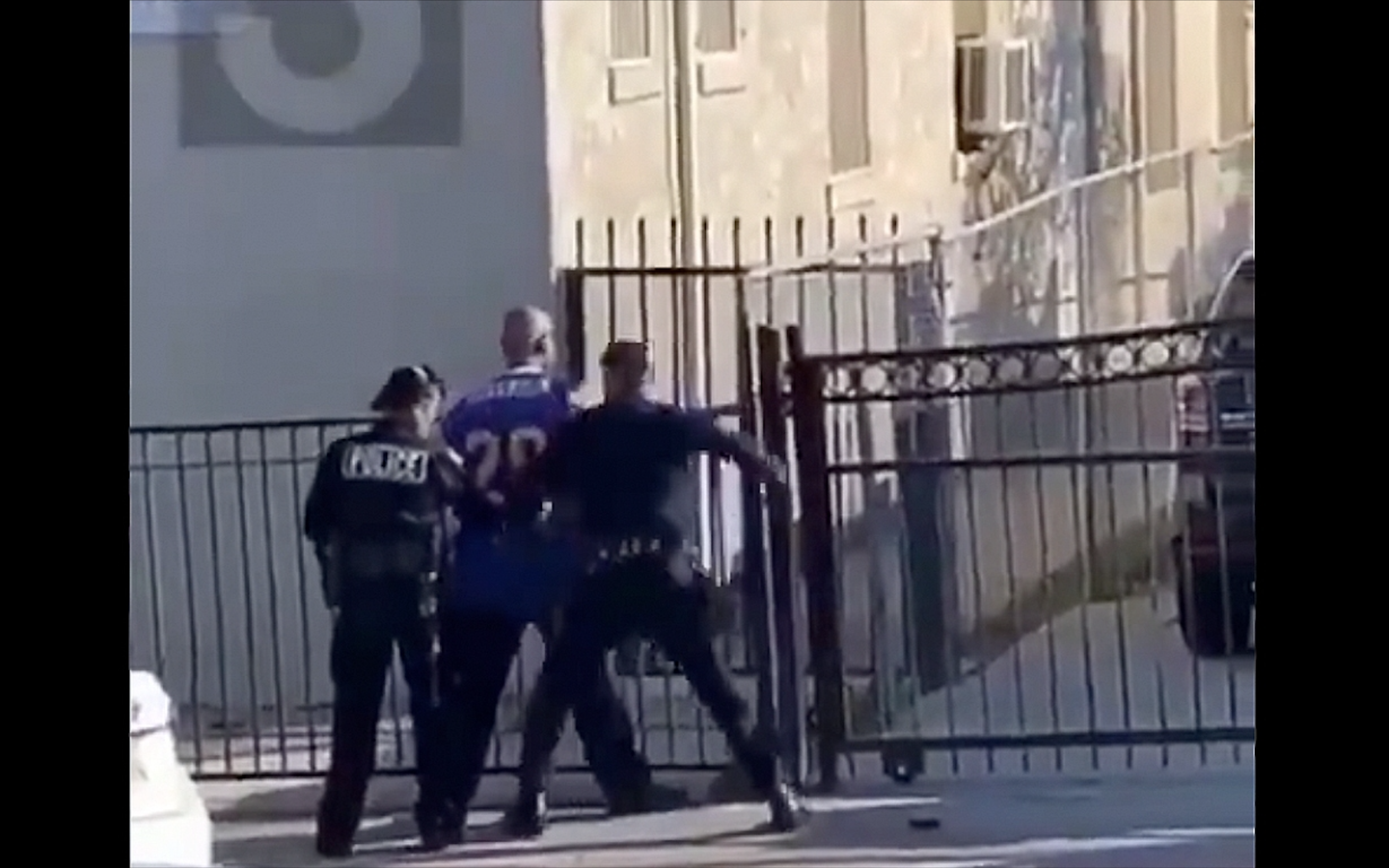 Burger King boss: We’re not going to pay our rent