So when it set up shop in New York City at the onset of the coronavirus pandemic — a rarity for a group that doesn’t often operate in the U.S. — it quickly got to work addressing a need that advocates for the poor there described as particularly pressing: putting cell phones in the hands of homeless people living in one of the wealthiest cities in the world.

Without those phones, advocates worried they’d soon lose touch with the city’s 80,000 homeless people, who are at greater risk for contracting COVID-19 due to their general living circumstances and likelihood of having pre-existing conditions. Worse yet, by the time Doctors Without Borders started inquiring about how they could help in March, the city’s in-person services for the poor were shutting down left and right, leaving some homeless people unsure where they could meet their needs in an unprecedented crisis. New York City was quickly becoming the nation’s epicenter for COVID-19 cases.

The organization soon secured 1,000 donated phones, set up with two months of unlimited texts and calls. Advocates working directly with the homeless in New York City during the coronavirus pandemic who regularly hand out food and other necessary goods said they started giving the phones to those in need this past week.

“If people don’t have phones, they can’t call 911, they can’t get a telemedicine appointment — or even make an appointment — since a lot of places are closed and they can’t just drop in,” said Michelle Mays, project coordinator for Doctors Without Borders in New York, said.

The organization also set up a station where homeless people could come take showers or use the bathroom in midtown Manhattan, since the churches and soup kitchens that previously offered a space to wash up were largely closed, too. 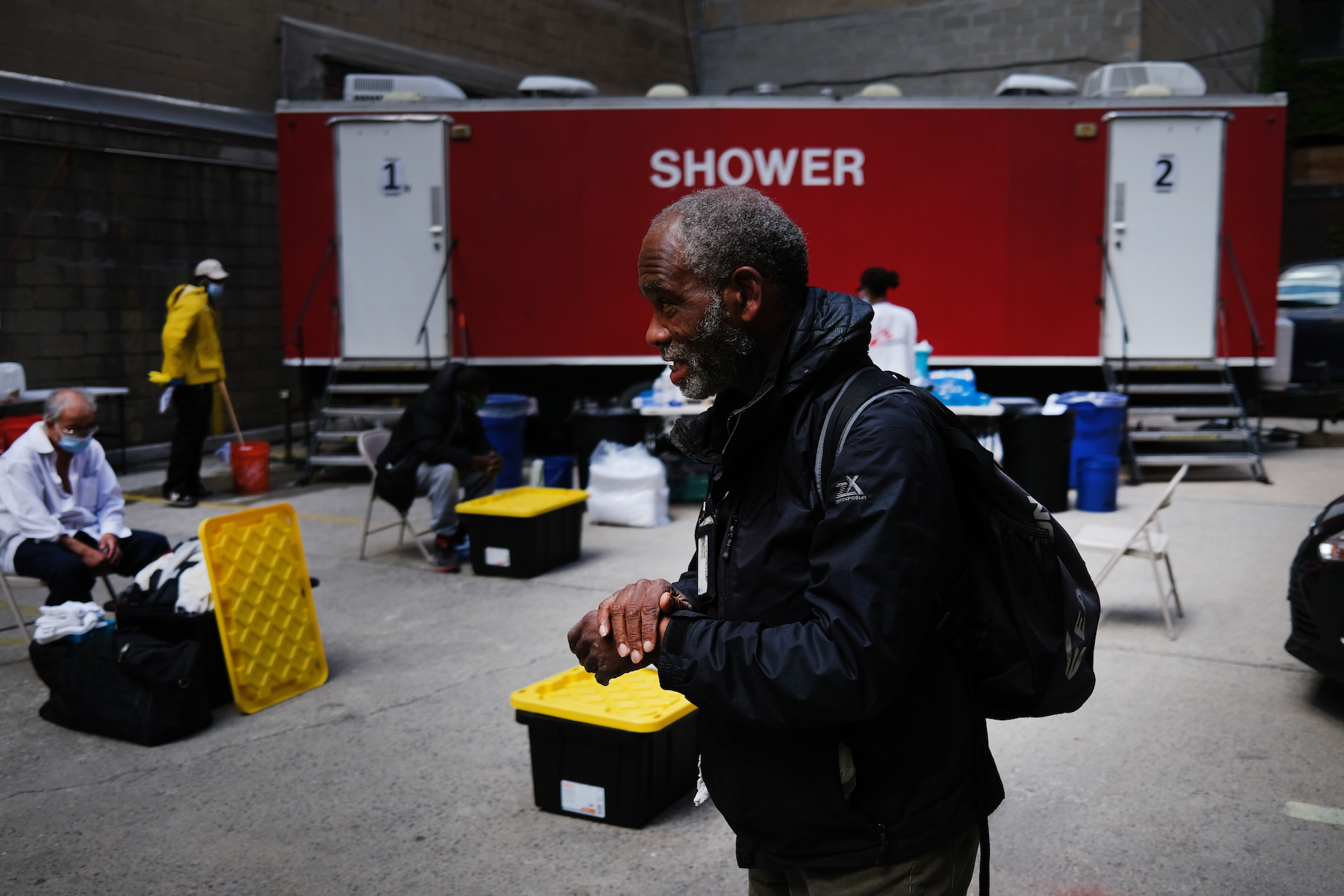 Warren, who is homeless, waits for a shower to open at a Doctors Without Borders/Médecins Sans Frontières (MSF) temporary shower trailer in Manhattan for the homeless and other vulnerable communities on May 07, 2020 in New York City. (Photo by Spencer Platt/Getty Images)

“What we’re good at and used to doing is jumping into a new situation and finding where our added value is,” said the registered nurse, who previously worked in crisis situations in Haiti and the Democratic Republic of the Congo. “I’ve never worked in a project like this in the United States, nor did I ever think I ever would.”

Josiah Haken, vice president of outreach operations at NYC Relief, said he started passing out the phones on Friday.

Since his organization already connects homeless people with resources every day while handing out food, he often asks people how he can reach them for follow-up care, anyway. Now, if someone responds that they’re without a phone, he can give them a tiny, black Alcatel device, affixed with a sticker that informs the homeless person of their number and who to reach in a crisis.

He’s given out about 15 phones so far. Some recipients were so relieved they were close to tears, Haken said. One man had been trying to get a phone for nearly two years.

One of the people he provided with a phone called at 10 p.m. the other night to say he had nowhere to go and needed help. The man, a coronavirus survivor who was recently hospitalized and on a ventilator, was living in a New York City subway car, Haken said. City police have descended upon the subway system in recent weeks to remove people like him, ostensibly so they’ll go to the kind of shelter many homeless people are intentionally avoiding. Haken hung up, got him a hotel bed, and called back to let him know where to go.

“The phone is literally a lifeline,” Haken said. “It can be the difference between life and death.”

The executive director of the New York City Coalition for the Homeless, David Giffen, said his organization was already looking at how to purchase more cell phones for homeless people when Doctors Without Borders stepped up. They’re now similarly giving them to the struggling people volunteers encounter while passing out food across the city every night.

“Masks are a weapon, hand sanitizer and hand-washing is also a weapon — communication is a weapon, it’s one of the things we have to rely on,” Giffen said. “If you’re on the streets, and there’s fewer places where you can actually interact with a caseworker and get help, a telephone is an obvious answer.”

Cover: MSF Logistician Eric Schimdt prepares dozens of cellphones for distribution. The organization’s COVID-19 team in New York City is distributing 1,000 cellphones to people who are currently homeless and housing insecure so they can contact emergency, medical and social services. (Photo: Michelle Mays of Doctors Without Borders) 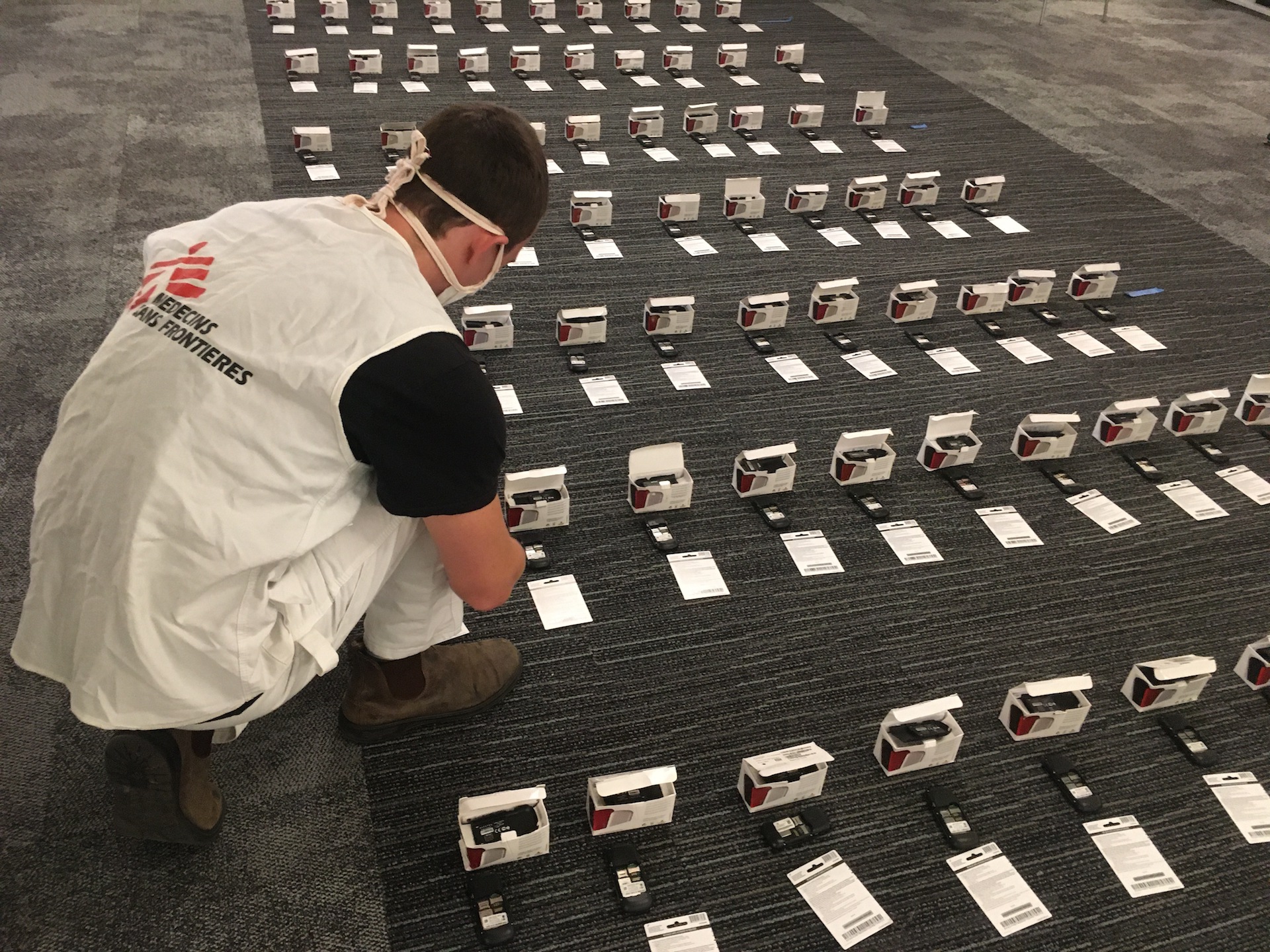