Art, in all its forms, has brought beauty and intrigue into the world since the beginning of time. Paul Day, a British sculptor, adds to that beauty with his gorgeous high-relief and free-standing sculptures. He creates stunning, lifelike 3D scenes and sculptures in bronze, terracotta, resin, and stainless steel. His high-relief sculptures capture moments in time, tell a story and recreate historical moments. Paul’s talent for bringing solid materials to life is nothing short of phenomenal. His intense and detailed works appear in public forums and private homes all over the world.

I first met Paul while traveling on a canal cruise with European Waterways. Our small group of six engaged in a private tour of his art gallery near Dijon, France. During a recent interview with Paul, I discovered more about his artistic process and the story behind his public and private works. I found that not only is he a gifted artist but also a warm and genuine person.

Paul began his career after attending art school at the Dartington School of Arts and graduating from Cheltenham School of Art. During our interview, I asked him the following questions.

What steps do you take to create each piece?
I begin by researching the subject. Then I draw sketches on paper and put together models in clay, followed by a discussion with the client evaluating the model. I use the same process when making something for my gallery. After discussions, I make a more elaborate miniature model, gain approval to make the piece, and then create a full-size sculpture. This piece goes to the foundry where I act as the project manager. A rubber mold is made from the clay and used to make a wax copy. The wax pieces are cast into bronze, and the sculpture is patinated (chemically colored) and finally installed.

How do you get clients?
My work consists of commissioned and non-commissioned jobs. Some commissioned projects come from winning a competition where the person or company taking 1st place receives the commission. Other pieces come about from people that have discovered my work in public places or have heard about me from former clients. Lastly, I sell my art online and directly from my gallery near Dijon, France, when people come to visit.

Tell me about a few of your commissioned public pieces.
An Urban Comedy was my first large-scale public piece. A private banker in Brussels commissioned me to create an 82-foot-long terracotta frieze in the Royal Galleries of Saint Hubert in Brussels. I knew absolutely nothing about Brussels, enabling me to go into the project with an open mind. I spent several months researching the city, meeting architects, interviewing historians, and talking to everyday people. I read a lot about the country and watched numerous films. I discovered the city as a character.

An Urban Comedy expresses a bird’s-eye view of the city. It is a visual novel with chapters covering the city’s history, physical structures, contemporary culture, and political and daily life. I made over 100 scenes, and it took 18 months to finish. 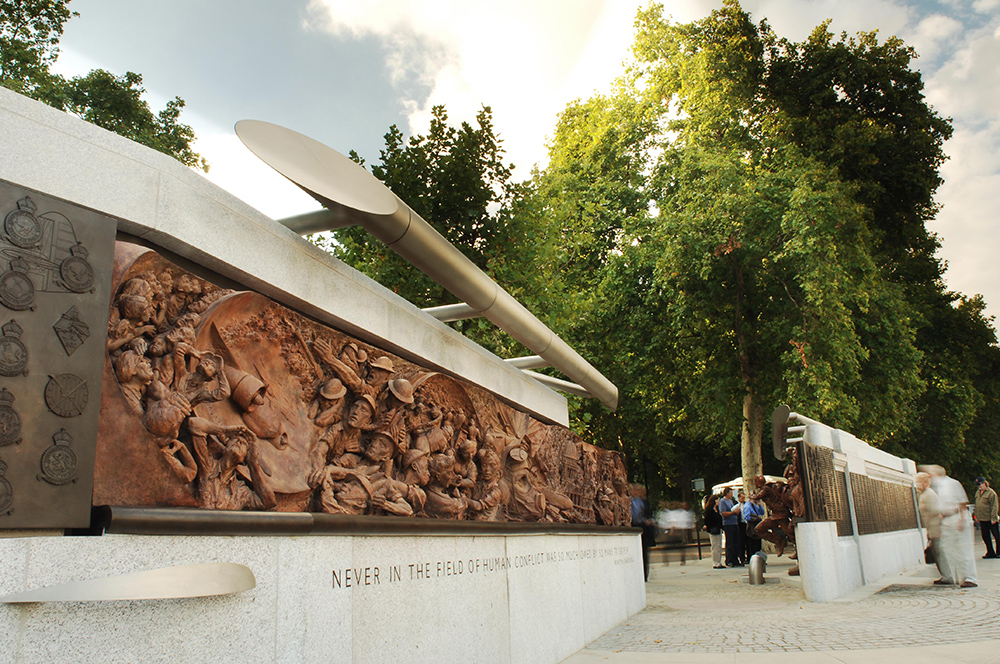 The Battle of Britain Monument

I subsequently won a competition for the commission of The Battle of Britain monument that sits on the Victoria Embankment in London. The frieze is a visual narrative. I took moments in the island’s history and created something that rose to the occasion. Looking at this frieze is like viewing the stained-glass windows in a cathedral. Each scene is part of a story that reads like a book. 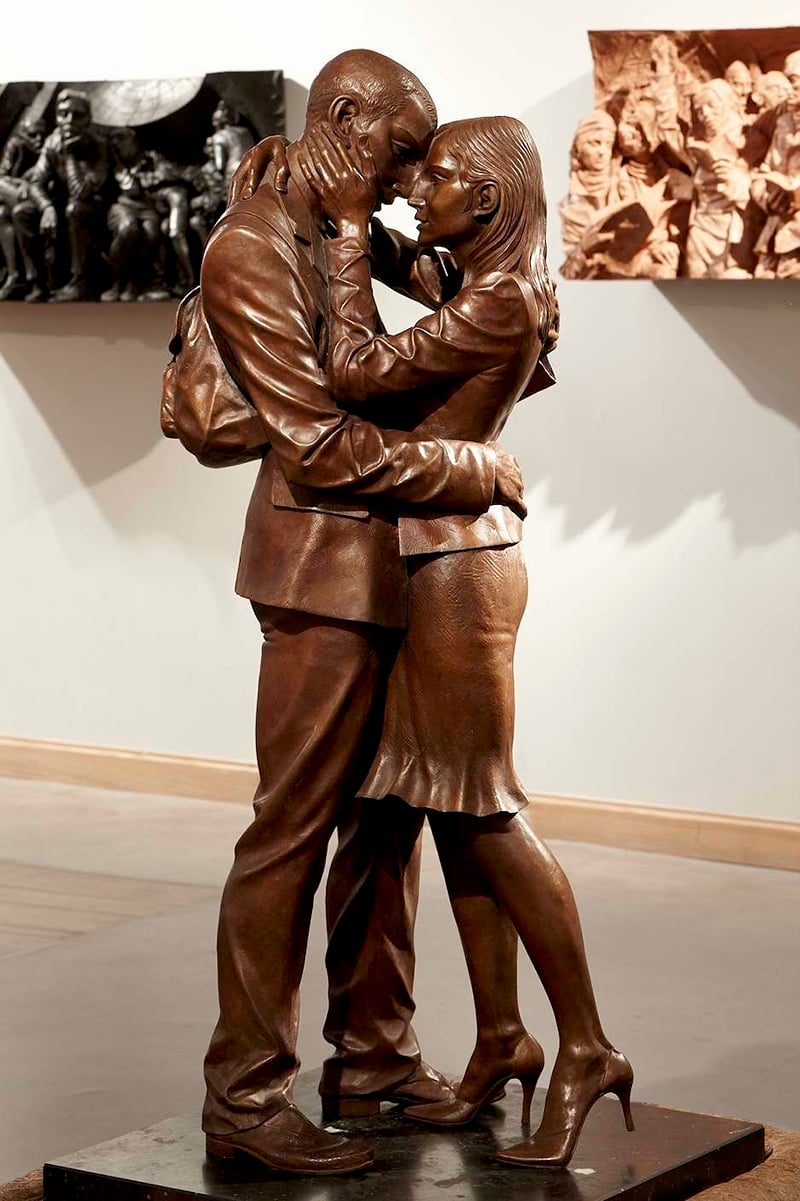 The Meeting Place, located inside St Pancras railway station in London, is a 30-foot-tall bronze sculpture with a high-relief frieze at the base. The designers determined the need for art during the last 12 months of the station’s construction. They wanted something that captured the spirit of romance in railway travel during the 1940s and 1950s and drew on the mood of the David Lean film “Brief Encounter.” The idea was to make something user friendly that was easily accessible to the public, nothing too highbrow or obscure. The sculpture is a large couple embracing. I wanted to add a little bit of bite to the project, so the reliefs at the base deconstruct relationships between couples traveling through the train station. Many people passing through the station spend considerable time talking amongst themselves about what might be happening in each scene. The scenes remain ambiguous and invite the viewer to interpret the narrative through their own eyes, working out whether the relationships are functional or dysfunctional.

My first sculpture in the United States was recently installed in Beverly Hills. The client named it Creation. This piece was privately commissioned and was something new for me. It is a very minimalist sculpture that stands nine feet in diameter. Inspired by a piece of jewelry that evoked something personal for the client, I designed the abstract sculpture using proportions based on the mathematical ideas of the Fibonacci sequence and the golden ratio. These measurements bring balance and beauty to things in nature and art. Sometimes things just feel visually right, and it’s often due to such proportions. Creation is not the type of project I usually undertake, but in this instance, I fancied the challenge of something new. Working on it has given me ideas for other abstract pieces, and it is nice to do something different and well outside of my comfort zone. 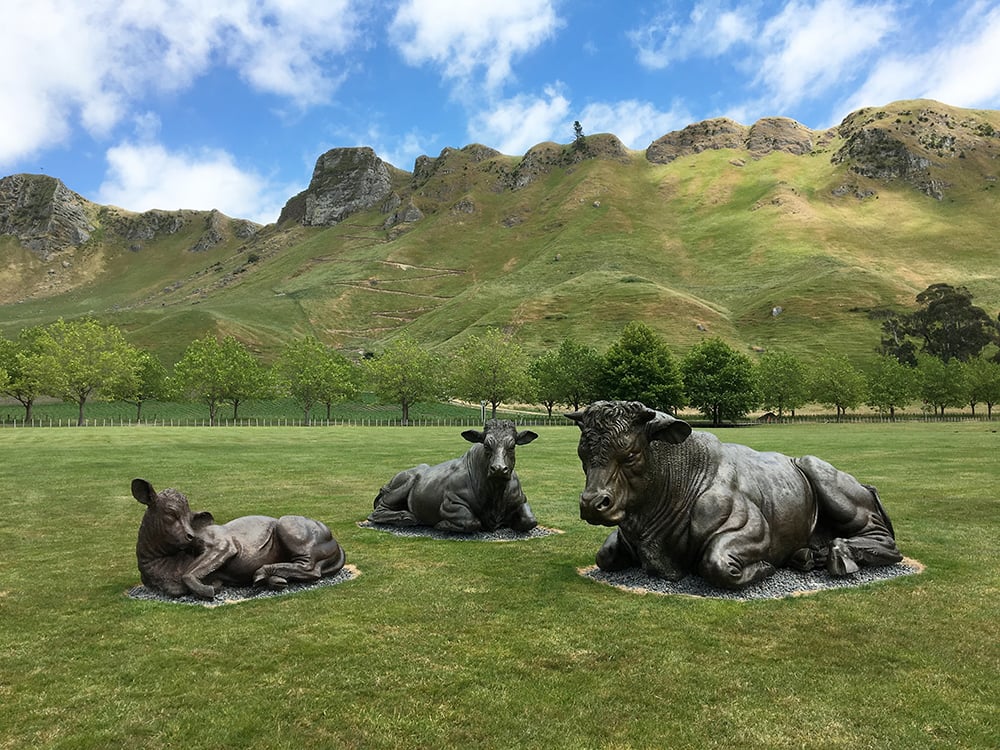 What other unusual pieces have you made?
A wonderful American couple living in New Zealand traveled on one of the canal cruise ships through Burgundy, France, and visited my gallery. I wasn’t home, but my wife showed them around. A few days later, they called and invited me to meet with them on the ship for a drink. They asked if I had ever considered making sculptures of domestic farm animals. They asked, “Do you do sheep?” “Well, yes, of course, I do sheep” was my instant answer, feeling puzzled by the question. Then the husband said, “There are too many sheep in New Zealand already. What about cows?” So cows it was. Having never sculpted animals before this serendipitous meeting, this project led to the creation of a series of monumental cows and chickens that are now installed at the glorious Craggy Range vineyards near Napier on North Island. I never intended to sculpt giant bronze farm animals, but I’ve acquired quite a taste for it! 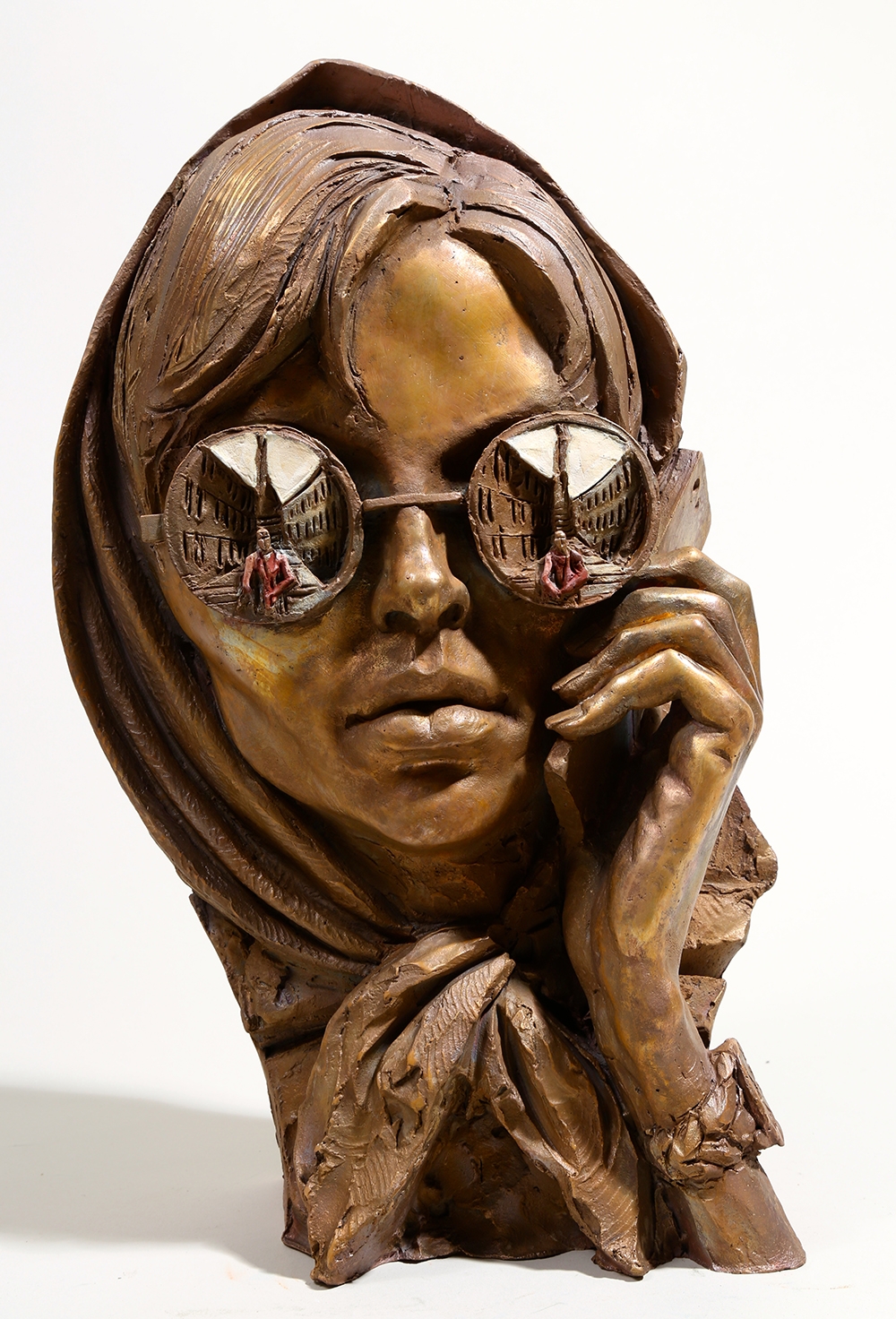 Are you working on anything new?
My current project is for Rollins College in Winter Park, Orlando, Florida. I have been invited to create a sculpture of one of their most famous alumni, Mr. Fred Rogers. Living in Britain I didn’t grow up watching Mr. Rogers on television; but after completing some research, I discovered a deep admiration for the man and his values. Fred Rogers was an ordained minister and is famous for his show “Mr. Rogers’ Neighborhood.” His philosophy was that love is at the root of everything and that each child is loveable just as they are.

Mr. Rogers was well known for changing his shoes and donning his sweater at the start of each show. Famous characters on his show included Mr. McFeeley, Lady Aberlin, and handyman Negri. The land of make-believe included Trolley and the puppets King Friday, Daniel the tiger, Henrietta the pussycat, and Mr. Owl. Everything Fred Rogers did was to help and educate young children. The bronze sculpture at the college will depict Mr. Rogers with his puppets surrounded by children.

Do you find anything especially challenging about the Fred Rogers’ piece?
Children are notoriously difficult to recreate. Most artists find them a struggle. Children often have a look that is very sophisticated and grown-up. It is hard to portray their complex expressions while retaining a childlike appearance. Children are whole beings in their own right, yet they are perplexed and often difficult to read.

Do you have any advice for aspiring artists?
I have always believed that my natural abilities are modest, but hard work and perseverance go a long way. I am very disciplined, and I work long hours. I don’t wait for the conditions to be “right” or for the inspiration to be there to work. I would say to aspiring artists that you should be in the studio every day and accept the mistakes you make until you get the results you are looking for. Working diligently over the decades could get you there. Nothing happens by magic.

What do you find most rewarding about your work?
Each day is truly a new beginning and full of possibilities. Sometimes it is difficult to get a sense of your mission in the world, but art gives me that sense of abundance. If in some small way, my art touches peoples’ lives for the better and brightens someone’s day, then I can go to sleep a happy man.

Paul is a fabulous example of a gifted and gracious man that has added beauty to the world through his art and his delightful personality. He has several incredible pieces for sale in his gallery and is available to create one-of-a-kind pieces on commission. Contact Paul at [email protected].