Right-wing protesters in Kentucky hung an effigy of Gov. Andy Beshear near the governor’s mansion on Sunday.

The group Take Back Kentucky hosted the “freedom-oriented” rally in the state capital of Frankfort, but eventually it turned into a more general protest against the state’s coronavirus lockdown and against the Democratic governor, according to the Louisville Courier-Journal.

After a larger rally at the state capitol and a march to the governor’s mansion and back with a smaller crowd, two men (including one reportedly wearing an armband of the far-right 3Percenters militia) helped hang the effigy of Beshear bearing the message “sic semper tyrannis” — Latin for “thus always to tyrants,” and believed to be what John Wilkes Booth said after assassinating Abraham Lincoln — from a tree outside of the Capitol building.

Eventually the effigy of Beshear was cut down. “There’s a gentleman that came up. He was pretty upset about it, and he cut it down,” freelance journalist Gerry Seavo James told CNN. “And he was like this has no place at this rally. We’re trying to be peaceful.”

Beshear communications director Crystal Staley called the effigy “wrong and offensive” and pointed out that Beshear’s children live in the mansion with him, in a statement to CNN. “As Kentuckians we should be able to voice our opinions without turning to hate and threats of violence,” Staley told CNN.

The act was also condemned by top Republicans in the legislature and by Kentucky Sen. Mitch McConnell, the Senate Majority Leader. In a tweeted statement, McConnell called it “unacceptable.”

Even the 3Percenter leadership has distanced itself from the effigy — kind of. 3Percenter Kentucky state secretary Patsy Kays Bush told the Courier-Journal that she was against it because she didn’t want it to hurt the militia’s image, but added that “we’re at the point where rallies and shouting and hollering is just not working anymore.”

The effigy of Beshear is just the latest coronavirus-related threat against public officials who are enforcing lockdowns. Earlier this month, a Michigan man was charged with terrorism after allegedly making “credible” death threats against Gov. Gretchen Whitmer and Attorney General Dana Nessel, both Democrats. And last month, Dr. Anthony Fauci of the White House coronavirus task force and the National Institute for Allergy and Infectious Diseases was given a personal security detail after receiving a number of death threats.

Some coronavirus threats have even targeted the general public. In April, 30-year-old Jacob Carr was charged with making terroristic threats during an emergency, after posting messages to a Facebook group threatening people who were seeking coronavirus tests at a New Jersey Rite Aid.

“I’m gonna run you all over with my SUV if I see anyone getting tested,” Carr allegedly wrote.

Cover: Kentucky Gov. Andy Beshear removes his face mask at the start of a media conference at the state Capitol in Frankfort, Ky., to provide an update on the coronavirus pandemic Monday, May 11, 2020. (Ryan C. Hermens/Lexington Herald-Leader via AP) 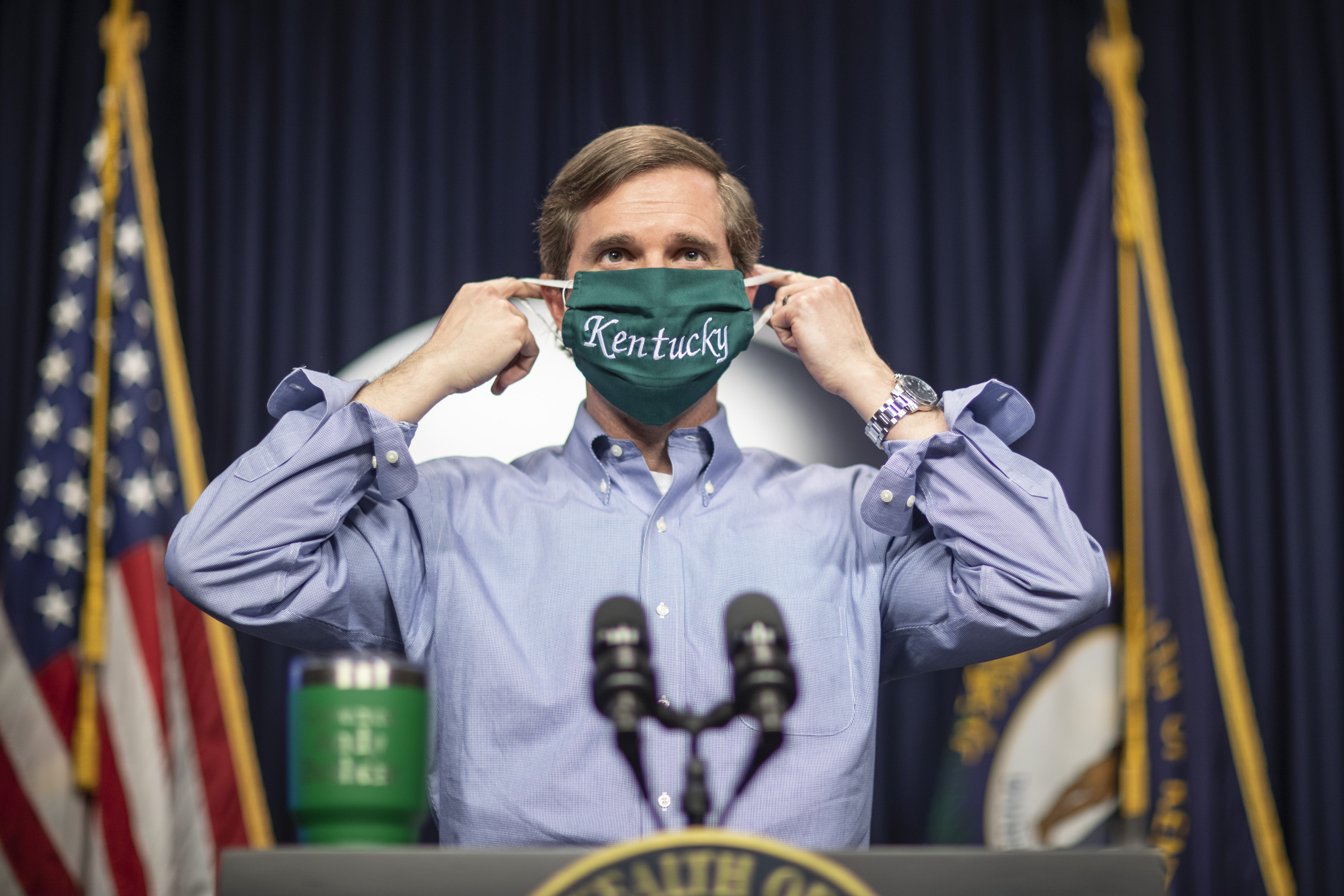