A second night of protest across New York City was punctuated by brawls and skirmishes between angry demonstrators and police across lower Manhattan and south Brooklyn.

As many as 200 people were arrested, and both police and protesters were injured. At one point, police attempted to commandeer a New York City bus to transport arrested protesters but the operator refused to drive it.

Demonstrators were furious over the killing of George Floyd by Minneapolis police, on the same day the alleged killer had been arrested and charged with third-degree murder and manslaughter earlier in the day.

At times tensions erupted as people threw bottles, set off fireworks, vandalized police vehicles — even set a van on fire — while the NYPD used mace and attacked demonstrators with clubs and drove cars at the crowds to disperse them.

The demonstrators’ frustration with law enforcement was palpable. In a city that was the epicenter of the coronavirus, many said while they were scared of getting sick but they felt they had to show up because they were too angry, fed-up, and afraid for their future.

“This country doesn’t value black lives, of course I’m scared,” said Issac Ortega, 21. “But, you know what? We can’t wait for justice any longer.” 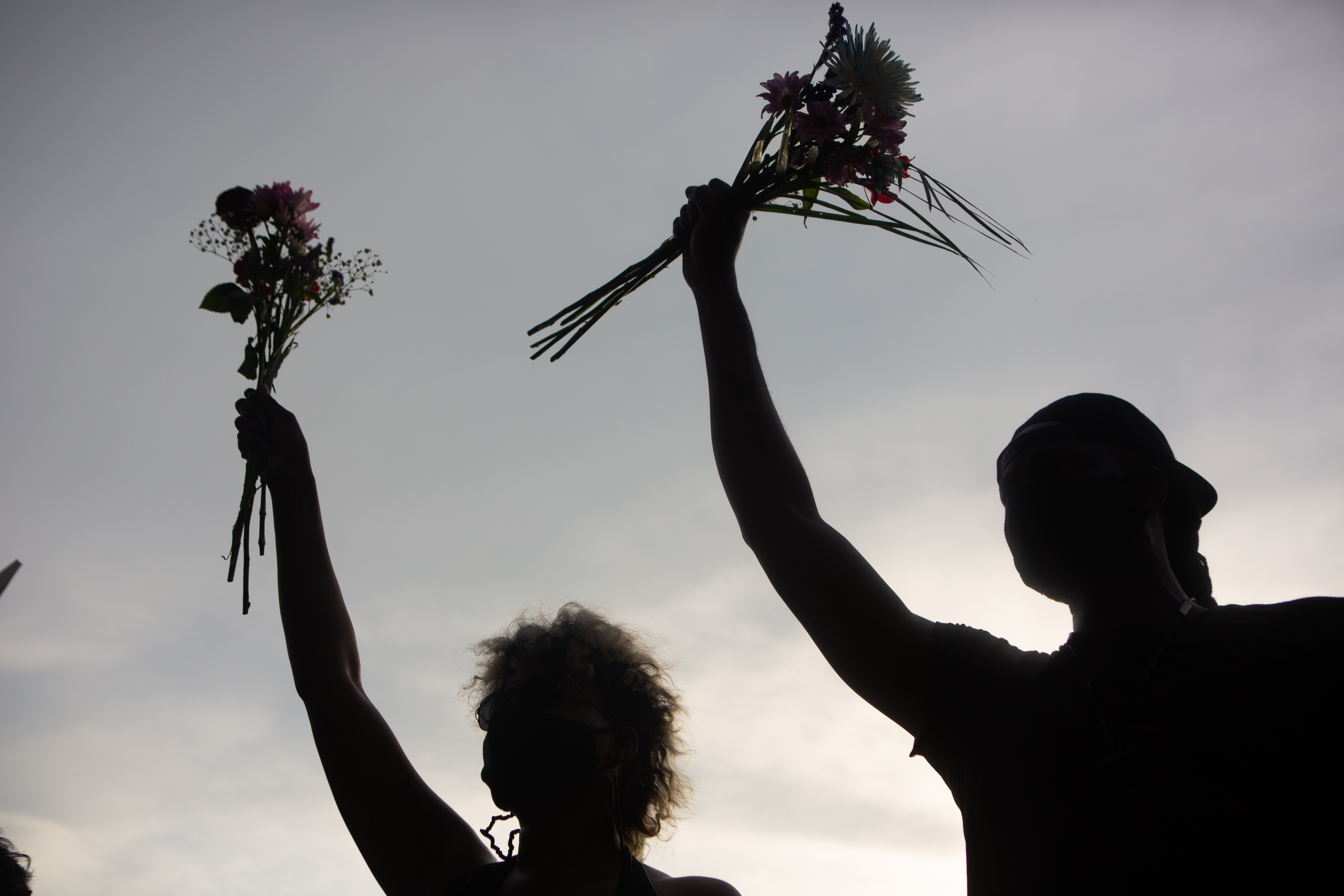 Larger crowd met at Foley Square, and groups broke off into rolling protests that moved towards police precincts — they screamed anti-police slogans, a visceral expression of their frustration. As demonstrators tried to walk in the streets, officers surrounded and tackled one man before arresting him and several others.

In a city that spent months as the epicenter of the deadly coronavirus, police tried to keep protesters to sidewalks, which forced bodies together and made social distancing impossible.

“We’re worried about a lot of other things right now,” said one officer, who wouldn’t give his name. “We’re just trying to keep them on the sidewalk.”

Demonstrators gathered at the Barclays Center in downtown Brooklyn at six pm for a memorial for Floyd, many carried bouquets of flowers in his honor. The crowd grew quickly from a handful to estimated 3,000, filling the square and lining the intersecting streets.

Police not only beat some protesters but used mace on those they said were acting out, but some including an Brooklyn assemblywoman said they were sprayed unprovoked.

Fireworks were set off in the crowd to cheers, while dozens of cops lined up in front of an empty bus and warned people to disperse or be arrested.

Protesters chanted, “hands up, don’t shoot” and insisted on their right to assemble.

Police began rushing out barricades, asking protestors to leave the sidewalk surrounding Barclay’s center, and pushing protesters onto Flatbush Avenue where they began arresting people who didn’t move fast enough. Some plainclothes officers who physically moved protesters by grabbing them by the limbs had no masks, gloves, or PPE.

On the other side of the square, one man said, “let’s take the street.” He walked in front of a stopped car and laid down on the street, as it started to rain.

A large group peeled away from Barclays and started marching through the streets toward Fort Greene Park, weaving through cars and shouting, “Fuck the Police.”

They were cheered by people in their cars, standing on their stoops and hanging out of windows calling out support.

While small groups marched as far as the Bedford-Stuyvesant 19th precinct building, most of the night’s violence was downtown.

By Fort Greene, one woman was thrown on the pavement by a police officer, an abandoned police van was set on fire, and a few blocks away a line of law enforcement rushed a crowd.

Confrontations went on into the early morning.

Cover: Dwayne Manigault and his daughter Amora, 10, attend the vigil in front of Barclay’s Center in Brooklyn, New York for the Justice for Floyd protest organized by the group Freedom Arts Movement. (Photo: Cassandra GIraldo/VICE News) 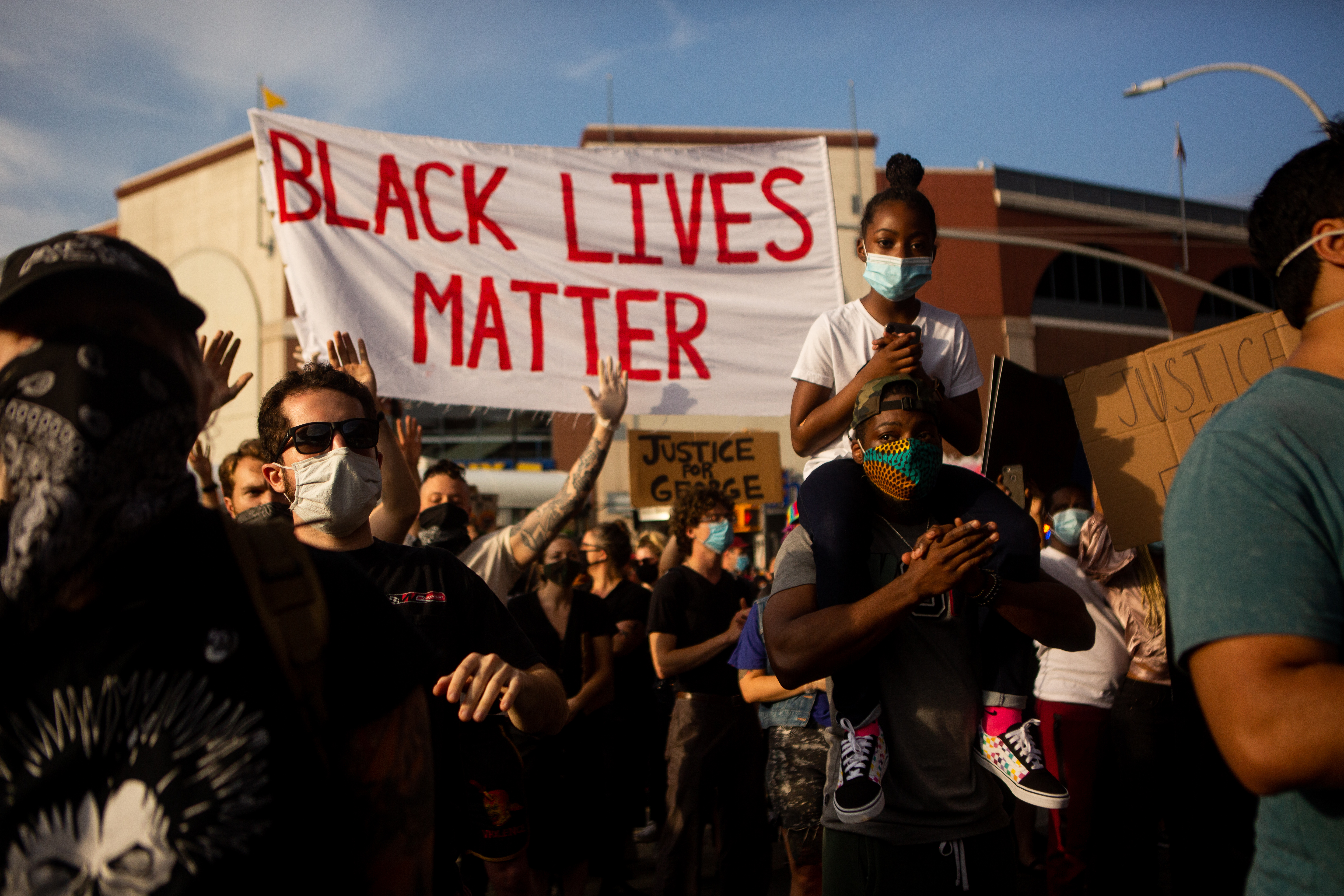