A group of young white men beat a nonwhite protester in Minneapolis as protests raged across the city, disturbing video obtained by VICE News shows.

It’s just a snapshot of some of the chaos that’s engulfed the city since Monday, when George Floyd died after a white police officer kneeled on his neck for more than eight minutes. And it’s some of the most tangible evidence to support Minneapolis Mayor Jacob Frey’s assertion that groups of unsavory characters were using the tragedy of Floyd’s death to stoke unrest in the city.

Jose Ponce, 26, who took the video, was walking with Tanis Beiris, 31, whom he’d met earlier in the day, when they encountered the group of three white men, in their early 20s.

They were being destructive, according to Ponce and Beiris, who said they witnessed the men shouting obscenities at police and throwing things. They followed them from a distance, and said the men went into burned-down buildings, grabbed stuff from inside, and threw it into the streets.

“They stood out to me in a way. They seemed like they weren’t from here; they looked very suspicious to me — something didn’t feel right,” said Ponce.

Beiris went up to them and asked them where they were from. She said one of them had a metal bar (which is seen in the video) and another had a machete — and they came toward her.

Suddenly a man whom neither Ponce nor Beiris knew intervened and told the men to get away from her. The man with the machete who’d been threatening her “jumped on him,” Beiris said.

“They just attacked him,” Ponce added. “Stomped him. It was bad.” In the video, it shows them pulling him to the ground and kicking him while he lies on the street. Ponce and Beiris said the victim appeared to be a person of color.

Other bystanders ran up and shouted at the attackers to get away.

After they left, “I ran up the street and yelled for a medic,” said Ponce. “This guy was bleeding, twitching.”

Beiris said the victim threw up twice after they got him to stand up.

Other protesters brought over a wheelbarrow, said Beiris, and they used it to transport the victim to a makeshift medical center set up in the parking lot of a Native American community center a couple blocks away.

Cover: A still from the video. 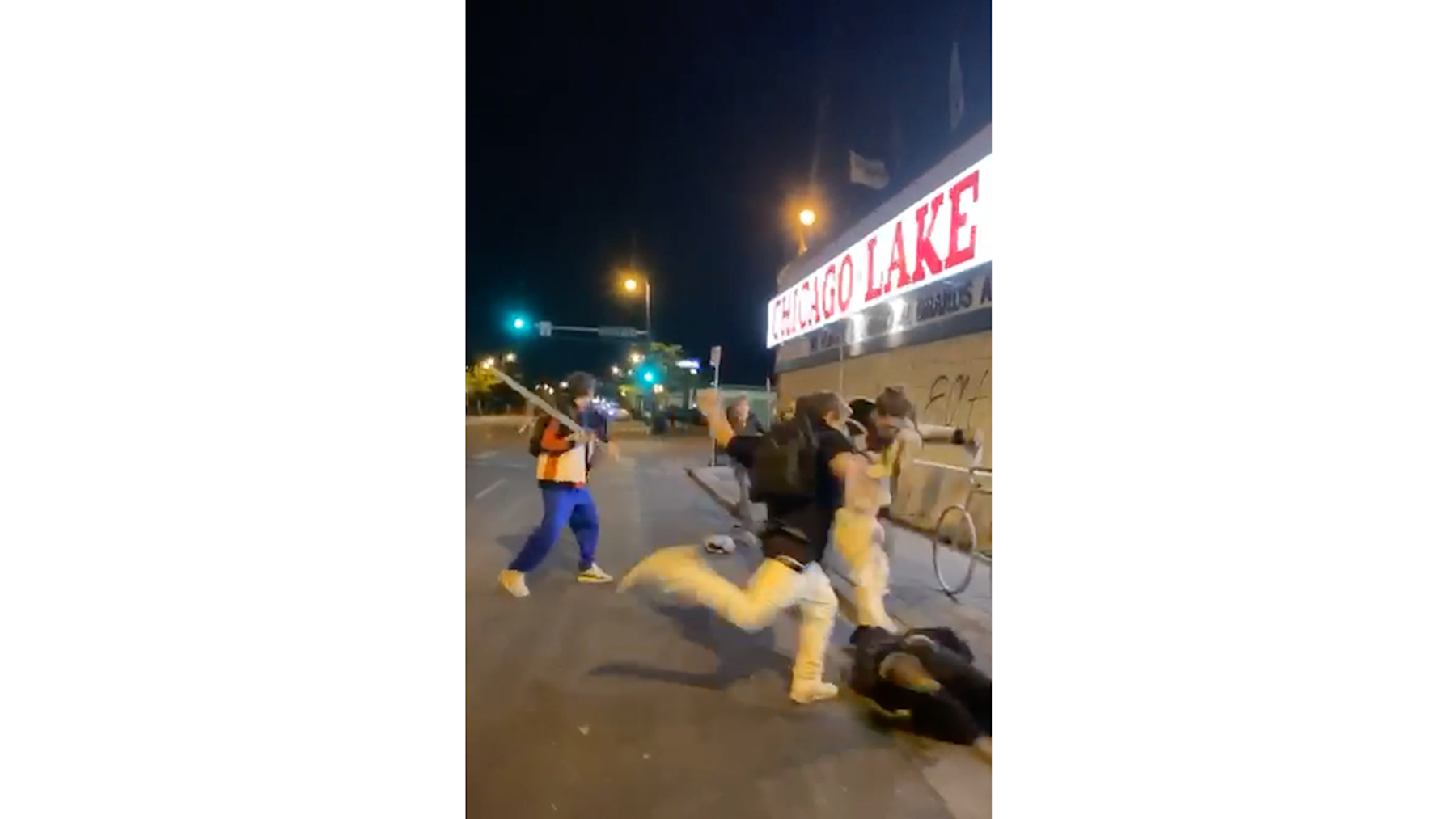 ‘I Assume You’re Here Because of My Swastika Flag’: Alleged Atomwaffen Member Pleads Guilty to Gun and Drug Charges