Hours after two NYPD SUVs were caught on camera plowing through protesters in Brooklyn, scattering bodies and sending one protester flying through the air, New York City Mayor Bill de Blasio said late Saturday he wished those officers had taken “a different approach.”

“I’m not going to blame officers who are trying to deal with an absolutely impossible situation,” de Blasio said at a press conference late Saturday. “The NYPD, all day long, has been working hard. It’s been a very, very difficult day for our officers. Some of them have been put into very dangerous situations, and that’s not appropriate.”

In a pair of videos taken at the scene, one SUV-sized NYPD car can be seen pulling up to a steadily gathering crowd of protesters, who place a makeshift barricade in front of the vehicle.

READ: Police chiefs around the country are breaking their blue wall of silence for George Floyd

As demonstrators throw what appear to be a few plastic bottles and a traffic cone at the car, a second NYPD SUV pulls up alongside the first. That second car keeps driving forward, straight into the crowd — and then the first car does the same.

The cars push protesters back several feet, throwing some to the ground. People started to scream.

An unnamed law enforcement source told CBS News that the police weren’t trying to “ram” the protesters but to “go forward and escape.” In the videos, protesters are not behind the cop cars as they accelerate forward — so they could have backed up instead.

Congresswoman Alexandria Ocasio-Cortez, a Queens Democrat, condemned both the video and de Blasio’s comments on Twitter.

“Defending and making excuses for NYPD running SUVs into crowds is wrong,” she said. “Running SUVs in crowds of people should never, ever be normalized. No matter who does it, no matter why.”

In the six days since video emerged of the killing of 46-year-old George Floyd by a Minneapolis police officer, dozens of cities across the United States have erupted in civil unrest. Saturday marked the third night of protests in New York City, and several incidents of the NYPD endangering protesters have emerged since Friday.

The NYPD did not respond to a VICE News request for comment about the video.

Across Manhattan and Brooklyn on Saturday, thousands marched, hoisted signs, and cried out Floyd’s name. Cops and protesters confronted each other late into the night, with demonstrators shouting slogans like, “No justice, no peace,” “Say his name: George Floyd,” and, “Say her name: Breonna Taylor.” (Louisville, Kentucky, police shot Taylor to death in her home in mid-March.)

In south Brooklyn’s Flatbush neighborhood, police and protesters clashed for hours. Demonstrators threw glass bottles, while police in riot gear periodically charged into the crowd to make arrests and drag people off into a waiting van. Helicopters hovered over the scene; at one point in the afternoon, a helicopter flew so low and so close to the protesters that the wind became overwhelming. Still, the protesters stayed, their hands in the air.

After sunset, a dumpster and a police car were set on fire. A cloud of peppery mace seemed to hang in the air permanently, and milk was splattered all over the pavement as people tried to wash out their irritated eyes. The entire block reeked of burning metal. 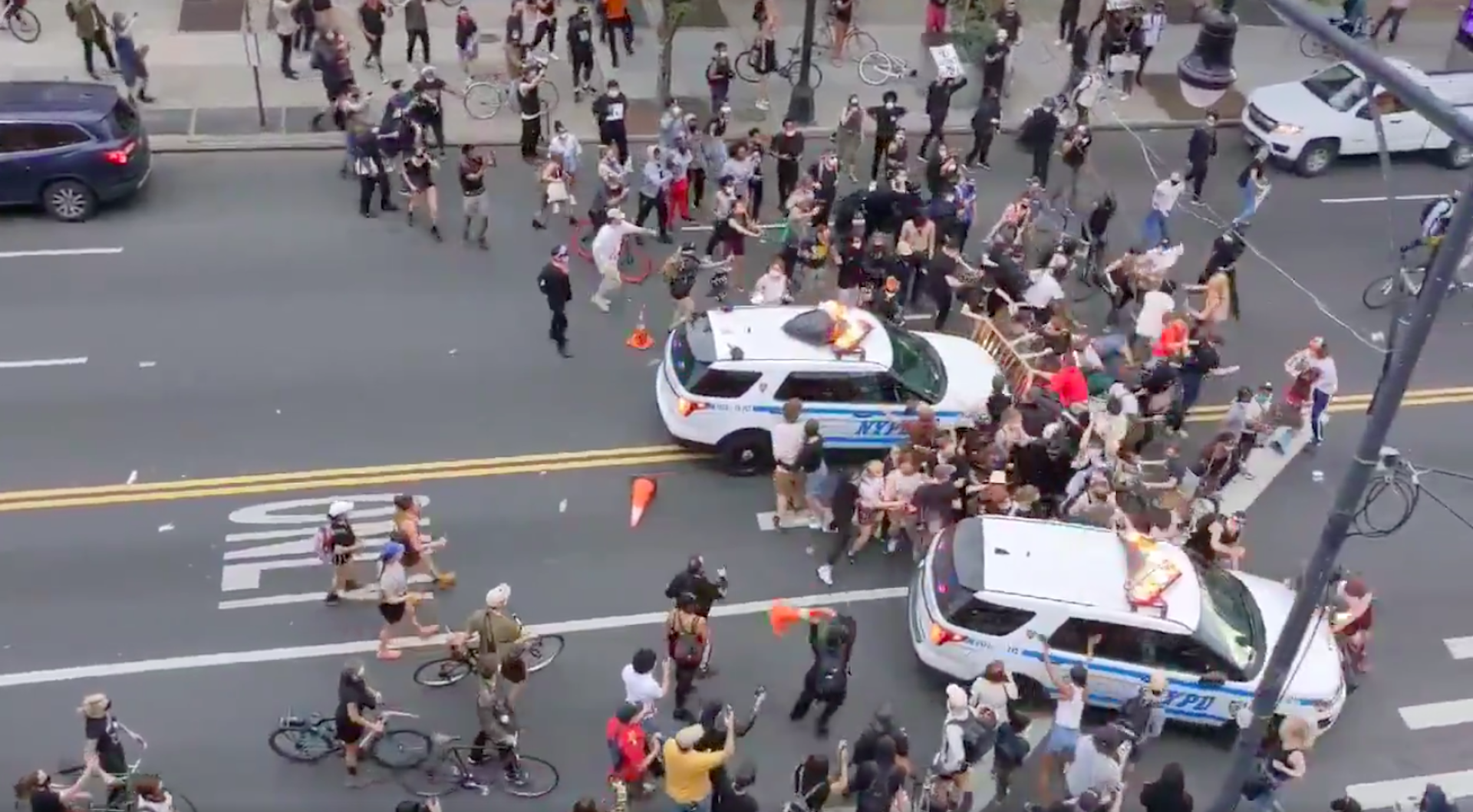