On March 10, 59-year-old Ace Lovell became homeless for the first time in his life. Days later, his city shut down.

Vancouver’s libraries closed due to the coronavirus pandemic, cutting off many low-income and houseless people from a valuable refuge and internet source. And as libraries, businesses and drop-in centres shuttered, the number of accessible washrooms suddenly shrunk, as did food availability. Water fountains stopped running. Shelters limited their beds. Single-room-occupancy hotels (SROs), where some without a home may have crashed in a friend or family member’s unit, stopped allowing guests. Fatal overdoses spiked.

Meanwhile, advocates in Vancouver’s Downtown Eastside neighbourhood worried what a COVID-19 outbreak could do to a community where underlying health issues abound and social distancing is sometimes impossible. “This is chaos waiting to happen,” warned Constance Barnes, who runs a local street market, after the city forced its closure on March 19.

Amongst the upheaval stood Lovell, waiting in line for a shelter bed on Hastings Street, balanced by his cane.

“To go from being safe and having a place to live, paying rent, having a stove and being able to go shopping every day and just live your life, and then all of a sudden, within a day, you got nothing, like absolutely nothing. You can’t even find a drink of water or a washroom. It shocked the hell out of me,” he said.

Daily life in the Downtown Eastside, the epicentre of British Columbia’s ongoing opioid crisis, shocked him too. With more people on the street and community resources slowing to a halt, he felt a sense of desperation grow among the community. “Now it’s all of a sudden like a third-world country, you know? There’s no bombs going off, but that’s what it’s like.”

Last year’s homeless count found 2,223 people living in Vancouver without a fixed address, the largest number on record. More than 600 of those counted were sleeping outside. Fiona York, a coordinator at the Carnegie Community Action Project, says efforts to contain the coronavirus, like reducing shelter capacity and prohibiting guests at SROs, have likely forced at least 200 more people onto the city’s streets. Other advocates say that number is as high as 400. 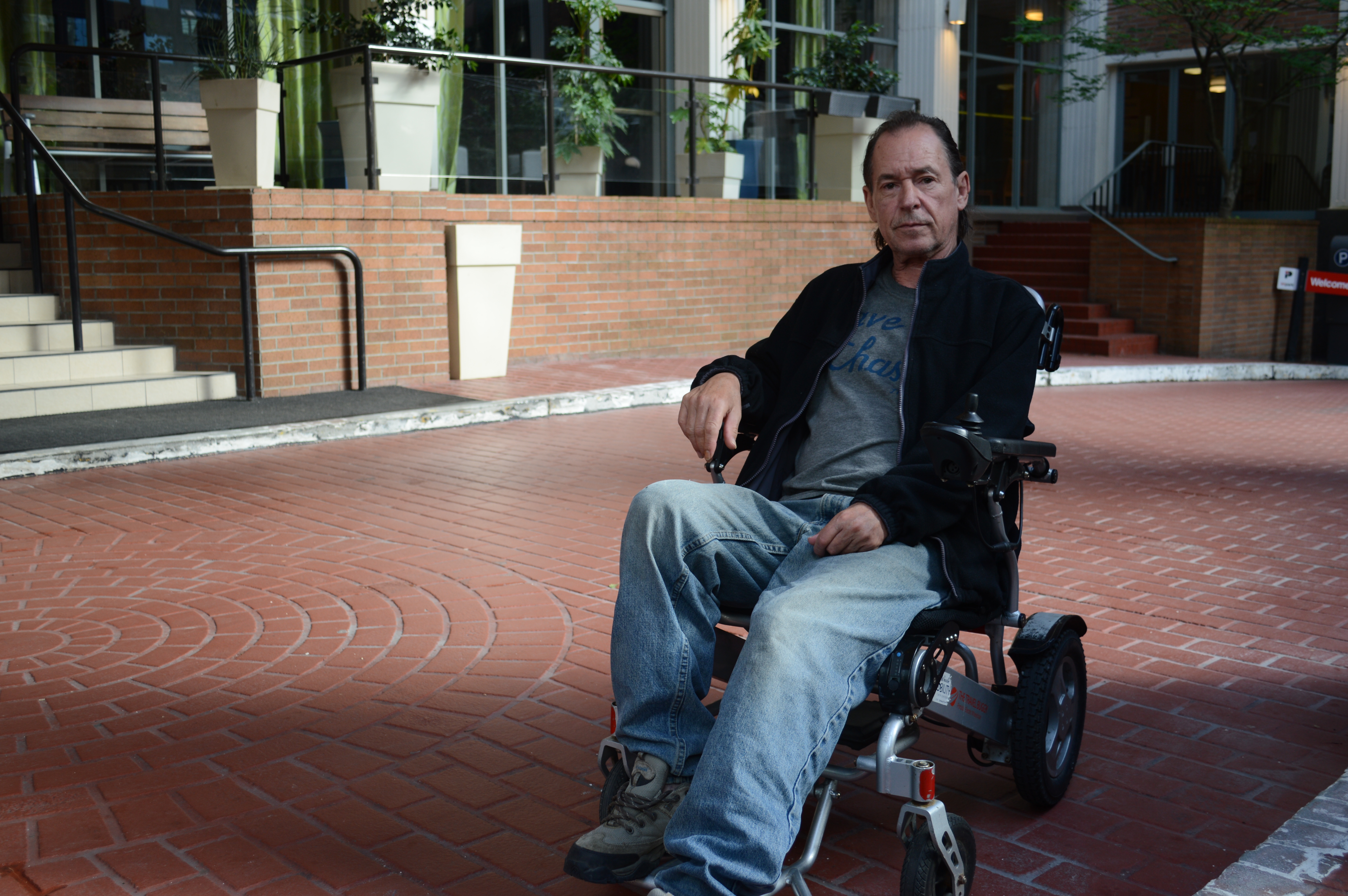 Ace Lovell in his new wheelchair.

Lovell never expected to wake up on a cot at the Union Gospel Mission. Before that, the closest experience he’d ever had to street homelessness was camping, he said.

For more than 25 years he made a living refurbishing deli and restaurant equipment, often passing his skills on to new employees. But eventually, his body could no longer handle the work. Complications from a serious car accident in his youth has left him with partial paralysis in one of his arms and weakness in his legs. A few years ago, he started to rely on a cane. In 2018, he begrudgingly retired and went on disability.

Earlier this year, Lovell was living with his 30-year-old son Tylor, but authorities cracked down on the illegal suite they shared. After getting kicked out, the pair crashed at a friend’s house. They looked at several places to live but were repeatedly turned away by landlords, often as soon as they mentioned they’d both be paying rent with disability money, says Tylor Lovell, who lives with fibromyalgia and PTSD. Frustrated by their luck, Tylor ventured out on his own.

The pair reunited days later at the shelter. The younger Lovell, who’s been homeless before, looks out for his dad. At the shelter, he helped him make his bed in the morning, withstanding the odd looks he received from those who didn’t know they were father and son. And after watching his dad lean heavily on his cane, Tylor showed up one day with an electric wheelchair a friend had found. His dad had to be goaded into taking a seat.

“I lived my life not accepting help because I helped everybody else,” the elder Lovell said. “But now I’m starting to accept the fact that, yeah, OK, I’m getting older, and I do need help.”

So far, the Downtown Eastside has avoided a COVID-19 outbreak. And while the community has been upended by sweeping attempts to prevent contagion, in some ways, the pandemic has acted as a catalyst for change. In late March, the provincial and federal governments worked together to expand access to a safe supply of opioids and methamphetamines for some users, an initiative long encouraged by the province’s chief medical officer, Dr. Bonnie Henry. (So far, however, the program has experienced a bumpy rollout.)

The tent city at Oppenheimer Park is also gone. After nearly two years and at least one previous attempt to clear the park, concern over community spread finally led to its end. Some former Oppenheimer residents have set up camp at a waterfront parking lot next to Crab Park, but the majority of the park’s 300 former residents have moved into social housing, including Tylor and Ace. Tylor started sleeping in the park a few weeks after reuniting with his dad at UGM. When he learned that BC Housing was offering Oppenheimer residents a safe, private place to stay, he made sure that his dad was also accommodated.

“I was sitting on the street one day, [when] my son comes up, and he goes, ‘Hey, dad, they found us a place to be comfortable,’” Lovell recalled. “I was like, Whoa, this is the best day of my life.”

As part of their plan to quickly house hundreds of people living in tent cities, BC Housing secured rooms at hotels then-vacant due to the pandemic. The Lovells moved into the Holiday Inn downtown at the end of April. Guests receive a couple of meals every day, as well as coffee and art supplies. Support for those facing mental health challenges or substance use issues is also available. But running water seems to be the biggest draw.

“Now I can drink water all day, and as much I want,” Tylor said. “And if I want to lay down, I can. I have privacy. I don’t have to worry about people stealing my shit if I look the wrong way for five minutes.”

People don’t realize how exhausting it is to be homeless, how hard it is to get a good night’s sleep, he added. “I’m not in that fight or flight mode anymore.”

The Lovells were told they could stay at the hotel for three to six months at a rate of $375 per month, money deducted from their monthly social assistance cheque. The provincial government aims to find permanent housing for everyone in the meantime.

“Nobody wants people to be back on the street in three or four months,” said Shane Simpson, B.C.’s minister of social development and poverty reduction.

Vancouver city councillor Jean Swanson, a longtime anti-poverty advocate, says the province’s efforts to safeguard Oppenheimer residents has revealed the city’s homelessness crisis to be, as she puts it, “deal-with-able.”

“The frustrating thing here is everybody knows that [homelessness] is bad and that it’s bad for everybody. It’s bad for condo owners in Yaletown. It’s bad for the Downtown Vancouver Business [Improvement] Association,” Swanson said. “It causes people to have half the life expectancy as other people if they’re homeless. It costs taxpayers more to keep people on the streets and put them in housing. You’d think that that would be enough reason to get the housing [Vancouver needs].”

She added, “If you hear some frustration in my voice, that’s because it’s actually there.”

In a statement to VICE, Vancouver Mayor Kennedy Stewart said he hoped that one consequence of COVID-19 would be further action to address the city’s “immense housing emergency.” But he also made clear that Vancouver doesn’t plan to do much on its own: “It will need to be senior levels of government that come to the city with solutions.”

As for Ace Lovell, he’s optimistic things will work out for him and his son.

“I appreciate what I’ve got right now,” he said. “I can come and go and get fresh air, get some food, so I’m pretty safe here. I’m just looking forward to maybe, you know, something getting better. I think it will. I have hope.” 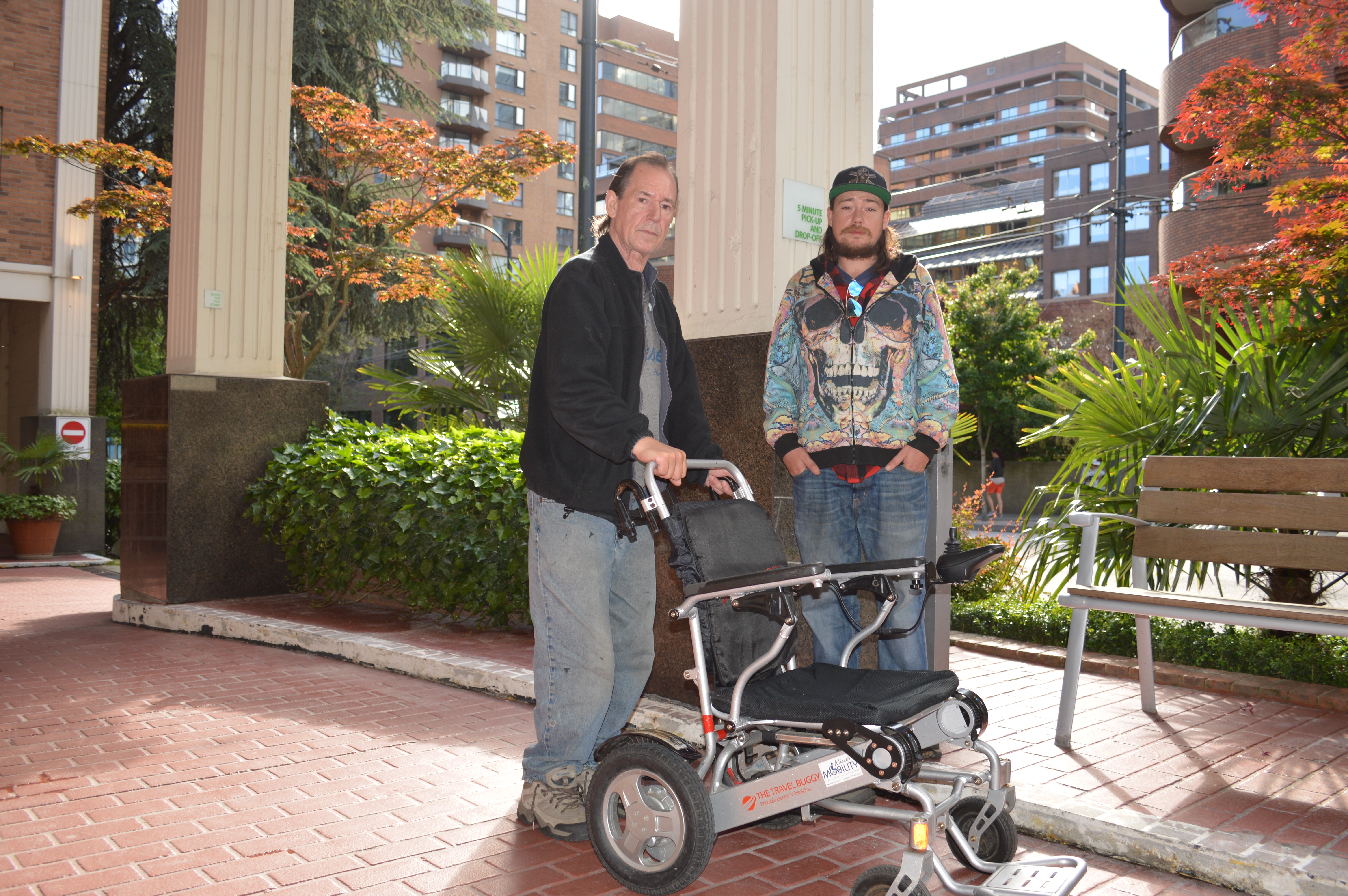 automate your posting Office settles IT ‘fraud’ case for £58m