Georgia’s elections are melting down — again. And things might get even worse come November.

Georgia held its long-delayed primaries on Tuesday. And even though the state had pushed its elections back months in order to prepare to hold them during the novel coronavirus, the same problems that have plagued Georgia for nearly a decade happened once again.

This all occurred after Georgia spent more than $100 million on new voting machines, a move criticized by voting rights activists for failing to provide adequate support for counties to implement the new system, concerns about whether the new machines would work properly, and worries that the Arizona-based company they contracted with wasn’t doing enough to prepare the state for Election Day.

In some precincts, new voting machines didn’t arrive on time for Election Day. Many other precincts ran out of emergency and provisional ballots, leaving people without a way to vote if the machines weren’t working or if they’d had trouble voting by mail.

Poorly trained poll workers struggled to make the new machines work correctly. The problems were the most severe and widespread in DeKalb and Fulton Counties, which include Atlanta and in its inner suburbs — but also cropped up in Cobb and Gwinnett Counties, and voting rights groups said they had reports from smaller, far-flung towns from Albany to Macon as well.

That led to long lines in many parts of metro Atlanta as well as in other parts of the state. And as has been the case for nearly a decade in Georgia, the poorest and most heavily Black communities were the ones where voting procedures broke down the worst. Many Atlantans reported waiting hours to vote. The Election Protection coalition said that while Georgia was just one of four states holding elections on Tuesday, 75% of the calls to its emergency hotline had come from Georgia — and three-fourths of callers were African American.

“Georgia is a repeat offender when it comes to voter suppression efforts and actions to undermine voting rights. With political will, they can get this right, and my hope is that we use the lessons we take from today to ensure every voter who chooses to exercise their voice in the November general election is able to do so,” said Kristen Clarke, the president of the National Lawyers’ Committee for Civil Rights Under Law. 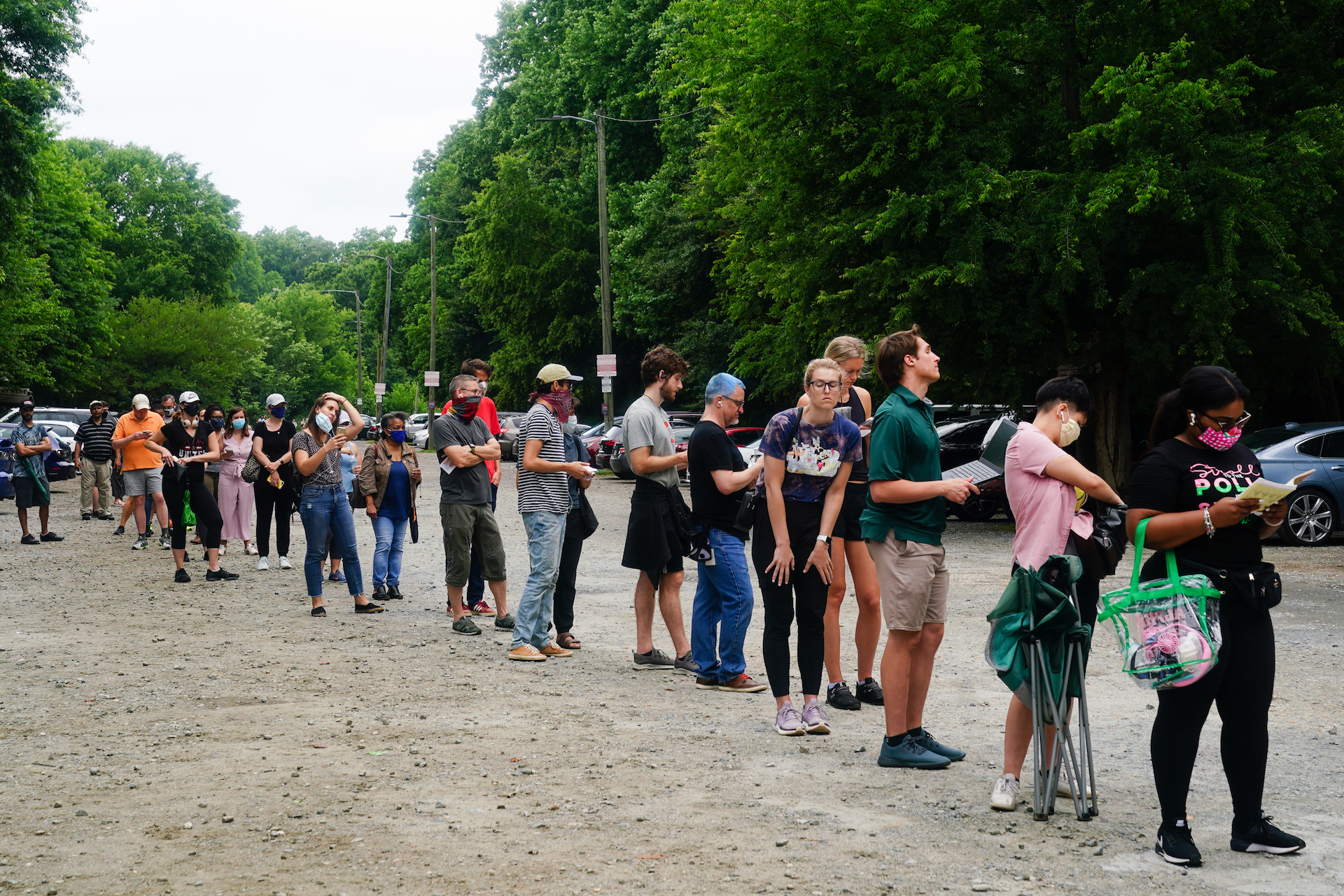 People wait in line to vote in Georgia’s Primary Election on June 9, 2020 in Atlanta, Georgia. (Photo by Elijah Nouvelage/Getty Images)

“If nothing changes… we’re going to see more voting barriers, more people turned away at the polls, we’re going to see a very ill-prepared Georgia for November,” warned Aunna Dennis, the head of Common Cause Georgia. “If we don’t get this ship on the right course, it’s going to implode.”

All of this chaos occurred even after Georgia officials sent all registered voters a mail-in ballot request form. But election monitors say that too many people didn’t get those ballots in time due to the rushed process, forcing them into a complicated and time-consuming process where local poll workers had to get state approval to void their ballot in order for them to vote provisionally. That slowed down lines and created additional headaches on top of the technical issues plaguing many parts of the state.

Many waited hours to vote — including former Atlanta Mayor Kasim Reed (D), who said he was in line for almost three hours before he could cast a ballot:

Similar issues marred the 2018 election, when then-Georgia Secretary of State Brian Kemp (R) edged Democrat Stacey Abrams for the governorship in a race Abrams and many Democrats thought was rigged against them.

Her voter protection group, Fair Fight Georgia, warned that the same problems were cropping up again — and could prove disastrous if they’re not fixed in time for November’s crucial elections. The state has two highly competitive House seats and two potentially competitive Senate races on the map, and it could be in play at the presidential level as well.

“Secretary of State Raffensperger had months to get this right, and he failed. Counties do not have the resources and training they need and there are problems across the state that echo and sometimes ring even more loudly than 2018,” Fair Fight Georgia spokesman Seth Bringman told VICE News. “He had better get his act together [before November] or people’s constitutional rights will be violated again.”

At first, Republican state officials in Georgia sought to blame the poll workers themselves for the widespread failures.

“So far we have no reports of any actual equipment issues. We do have reports of equipment being delivered to the wrong locations and delivered late. We have reports of poll workers not understanding setup or how to operate voting equipment. While these are unfortunate, they are not issues of the equipment but a function of counties engaging in poor planning, limited training, and failures of leadership,” Georgia Statewide Voting Implementation Manager Gabriel Sterling said in a statement.

As it became clear how widespread the problems were across the state, Georgia Secretary of State Brad Raffensperger (R) tried to blame the counties.

“The voting situation today in certain precincts in Fulton and Dekalb counties is unacceptable. My office has opened an investigation to determine what these counties need to do to resolve these issues before November’s election,” Raffensperger said in a Tuesday-afternoon statement. “Obviously, the first time a new voting system is used, there is going to be a learning curve, and voting in a pandemic only increased these difficulties. But every other county faced these same issues and were significantly better prepared to respond so that voters had every opportunity to vote.”

But voting rights advocates who have long battled with Georgia officials think that’s passing the buck.

“I place the indictment on the secretary of state and the governor for not doing all that they can to ensure that in the middle of a pandemic counties would have the support, resources and training necessary to administer an election in which they were using this technology for the first time,” Clarke told VICE News Tuesday. “We anticipated every problem that’s happening in the state today.” 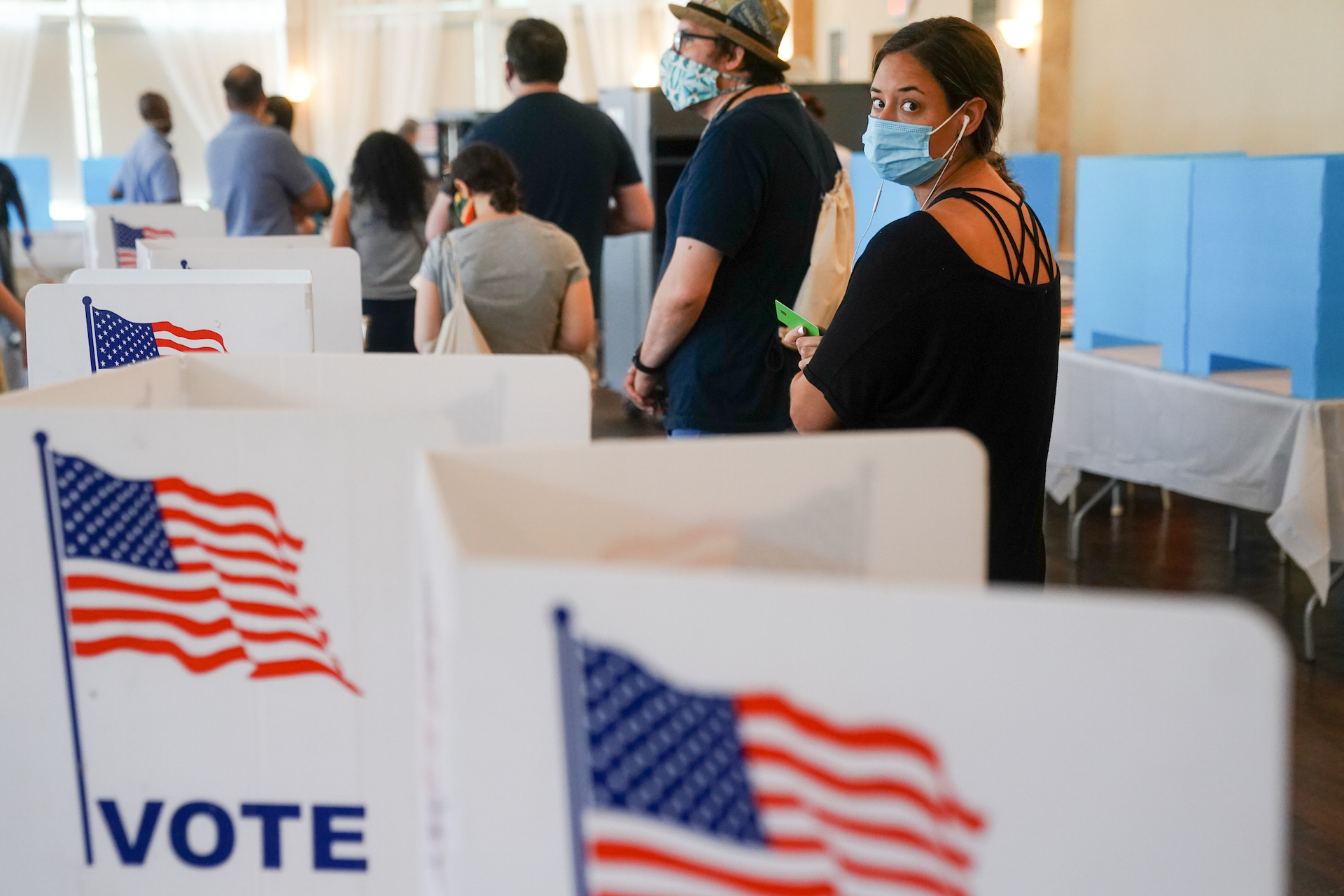 Pound falls on the prospect of a no-deal Brexit