The Prancing Horse is on a roll; the Roma would be its fifth new launch in a year or two, and with a blockbuster IPO under its belt along with robust earnings, it is clear that it can do no wrong at the moment.

However, while Ferrari‘s current product line-up is no doubt the strongest it has ever been, there is a sense creeping in that its designs off late seem to be more likely conjured up in a hi-tech laboratory rather than being sketched by an Italian with a cigarette in one hand… 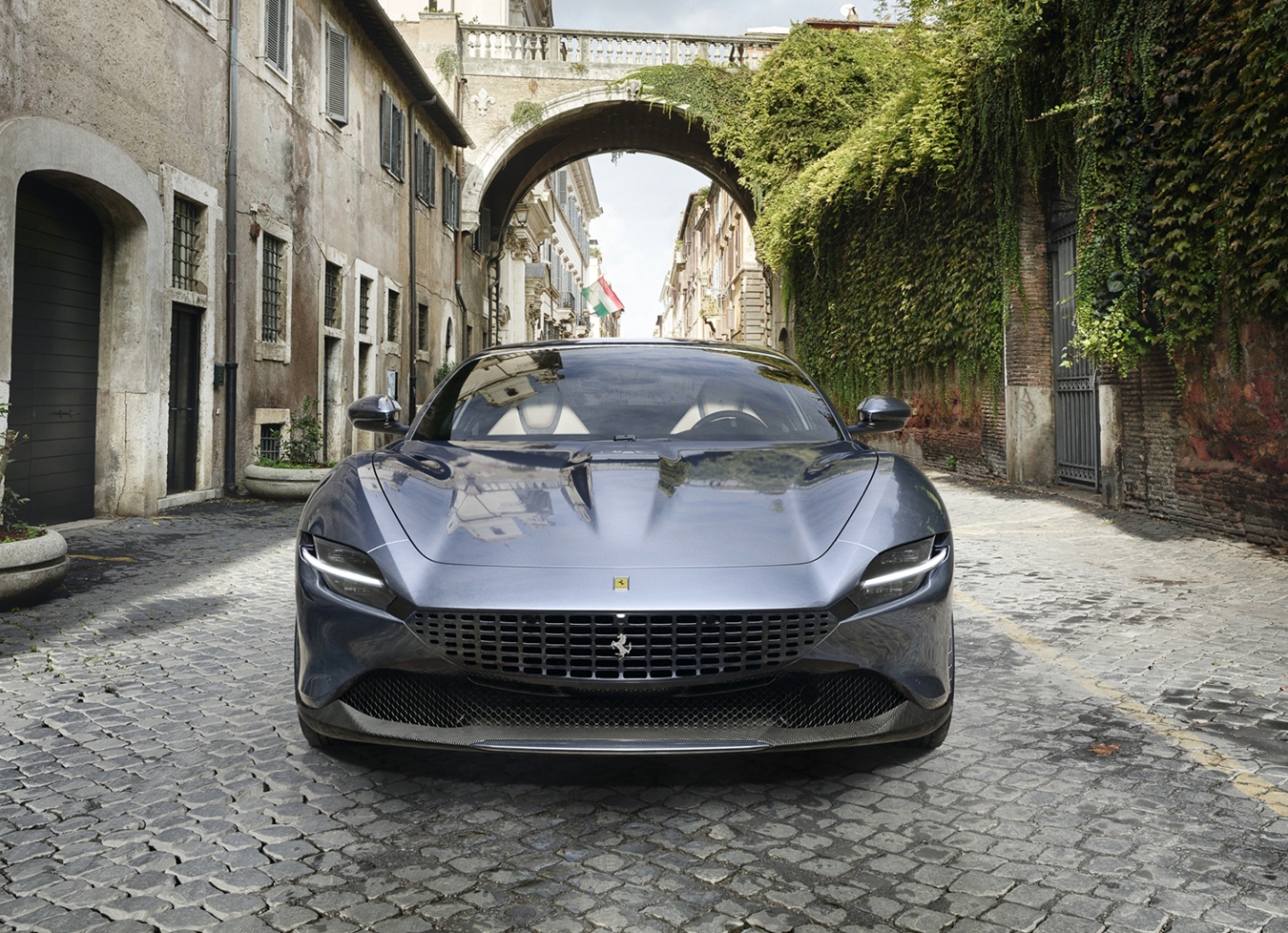 The 812 Superfast, F8 Tributo, and the Pista are known for their slightly insectile design language, and all of them bow down at the altar of aerodynamics plus the relentless pursuit of speed rather than outright beauty.  However, the car that you see here changes that. The Roma signals the welcome return of the classic Ferrari GT. It reminds you of the days of the classic Ferrari’s of yore like the glorious Dino (though it wasn’t badged as a Ferrari), 365 GTB/4, 275 GTB, and others.

The Roma isn’t built for pounding lap after lap at a racetrack as instead, it’s built for cruising down from Marseille to Monaco in utter comfort and luxury. Speed is a byproduct here and not the main ingredient- rare for a Ferrari but a welcome change nevertheless.

However, before we wax more lyrical about Ferrari’s newest, let us talk in detail regarding the ethos of the car. Armchair pundits and unkind souls will no doubt say that it is a fixed-roof Portofino while the front-end has a whiff of the Aston Vantage. Overall though in the flesh, it sort of just works, and it’s easy is one of the prettiest creations to come out of Maranello.

The proportions are reminiscent of the Italian playboy GT sports cars of the 50s and 60s. It is a classic front-engine and rear-drive formula which just works in providing a beautiful canvas for a gorgeous sportscar. We love the subtle detailing and especially Ferrari’s nod to its past as the Roma does without the Scuderia Ferrari side shields- just like its 50s cars. 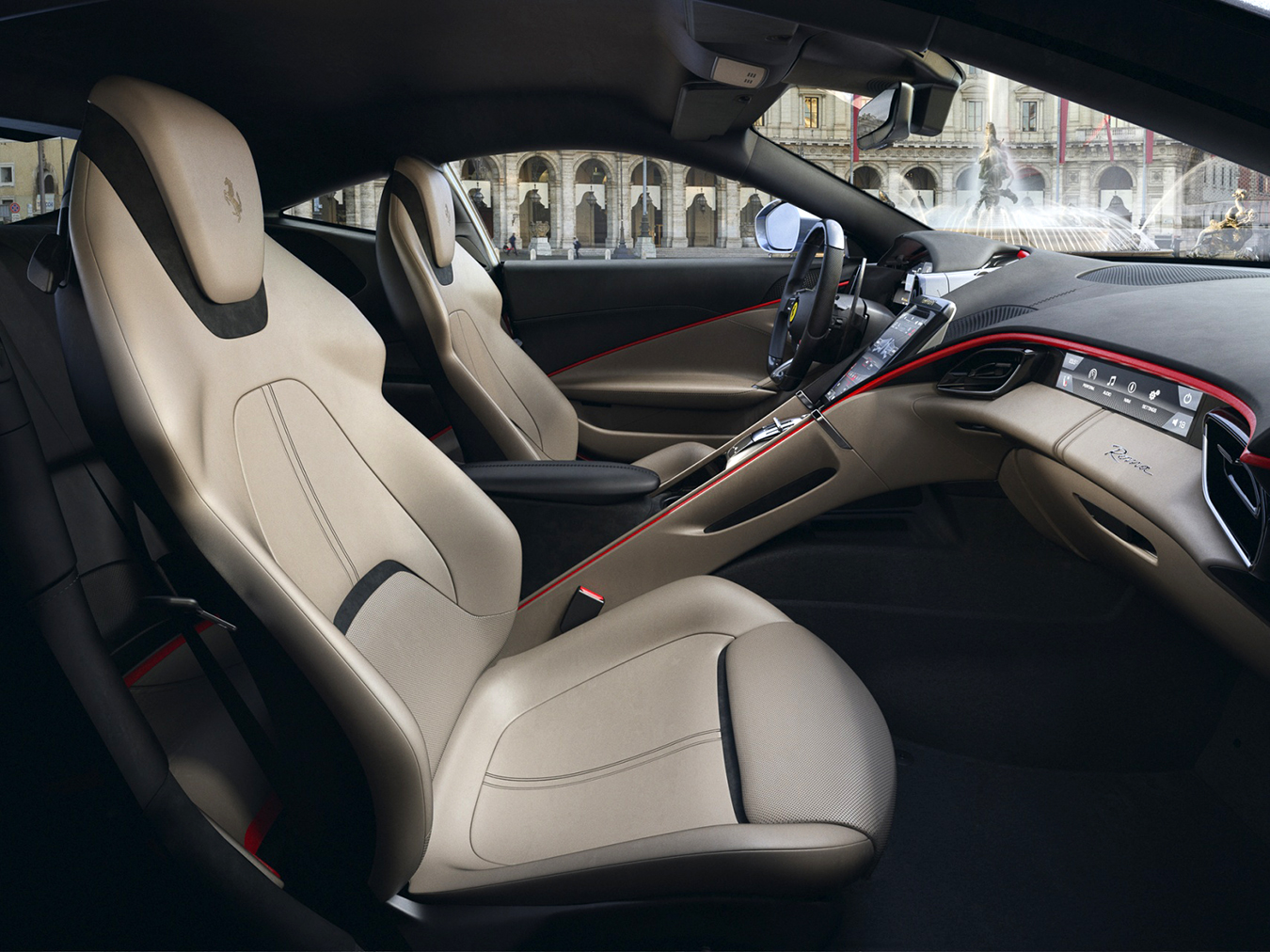 There is a long and low snout while the wider grille being flanked by voluptuous proportions are a sight for sore eyes. It is also a Ferrari that looks the best in subtle colors and not screaming from the roof-tops in the louder Ferrari hues. The rear-styling is arguably the best angle where we love the tapering and how the lines flow in harmoniously while the tail-lamps are also embedded in there beautifully.

At this point, we should probably get inside the car, but before that, there is the small matter of the new Ferrari key. Had it been some other car, we would not have even mentioned it here, but also the keys to a Ferrari in the past had a charm to it in its simplicity. However sad to say it has now been confined to the history books as in-place is a leather key fob with a massive Ferrari logo embossed on it. However, in these days of oversized key fobs masquerading as touch-screens and whatnot, the new Ferrari key is still a real thing of beauty. 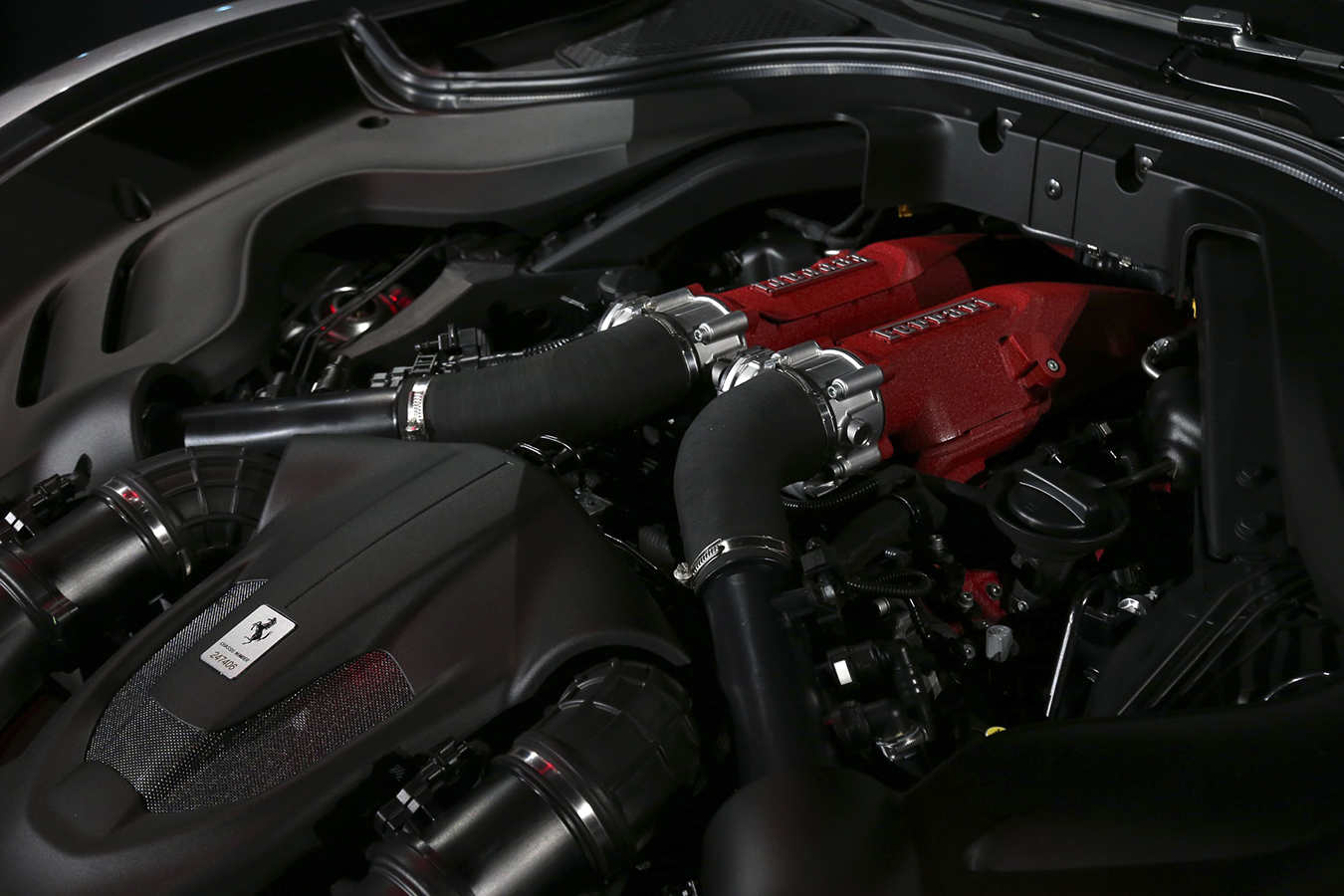 Back to the interior and here there is a beautiful amalgamation of the past and the present. There is a lot going on with the juxtaposed screens and an endless array of displays wrapped in beautiful leather. The cockpit is less driver-focused than some of the more hard-core Ferrari’s, and the cabin architecture is layered evenly. The design is sci-fi, but it is also dotted with lovely details like the F1 controls being relocated to a metal plate on the center console, and that is to remind you of the classic Ferrari gated manuals of its illustrious past. 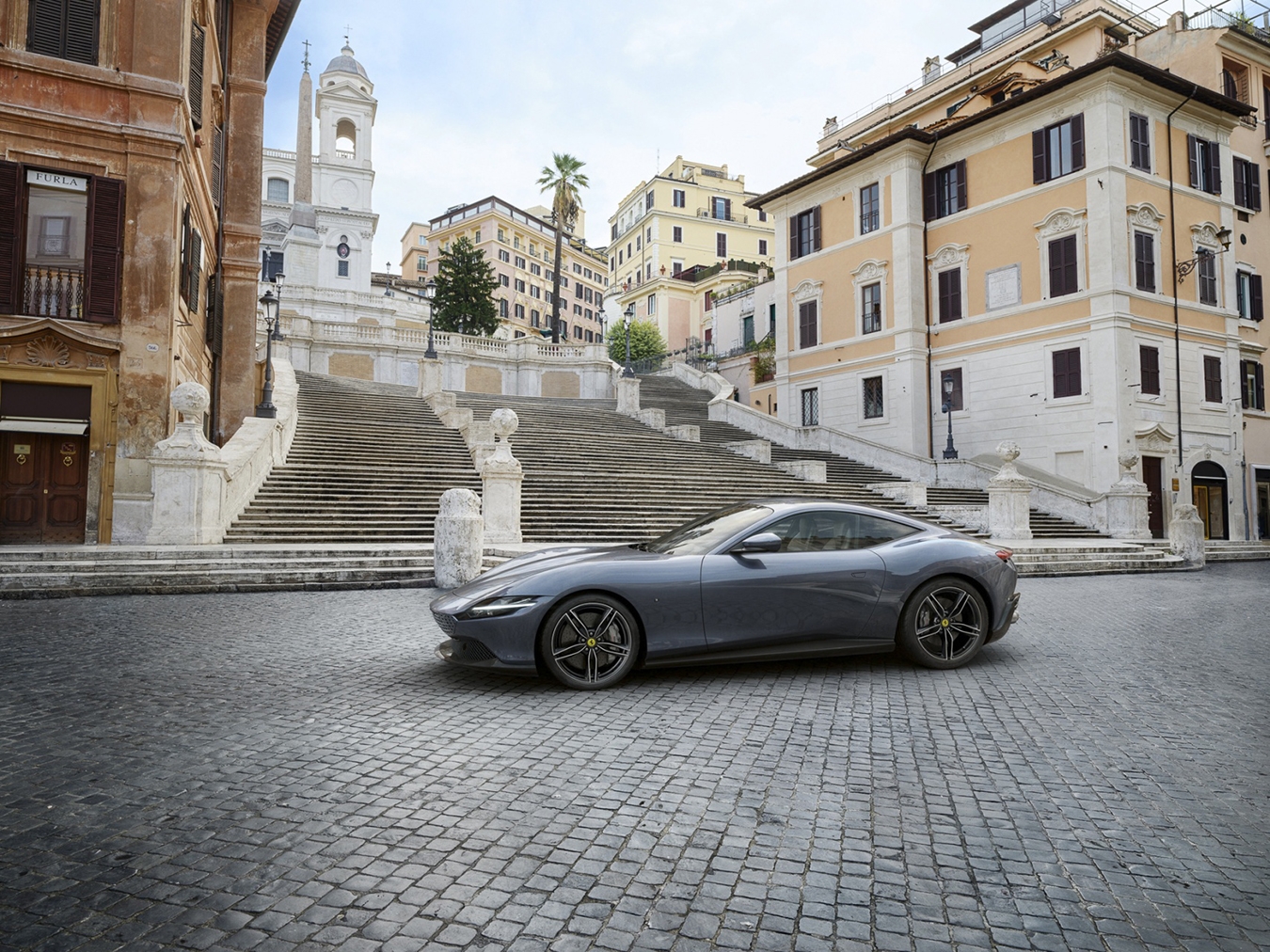 Ferrari calls the interior of the Roma as a ‘dual cockpit’ design, and the passenger is a ‘co-pilot’ with the design wrapped around both of the passengers. Else-where there is shiny chromed aluminum, Alcantara, and carbon-fiber. At the same time, the usual long list of Ferrari options means that only your checkbook is the limiting factor here and not your imagination.

There are two HD displays, while the classic Ferrari dials are now a thing of the past with the massive new 16inch instrument cluster giving you more information than ever to brag about to your mates at the pub. Crucially amongst all this, Ferrari calls the Roma a ‘2+’, and that means there is more than enough space for your children or your luggage though the boot is also quite decent with ample space for your shopping. 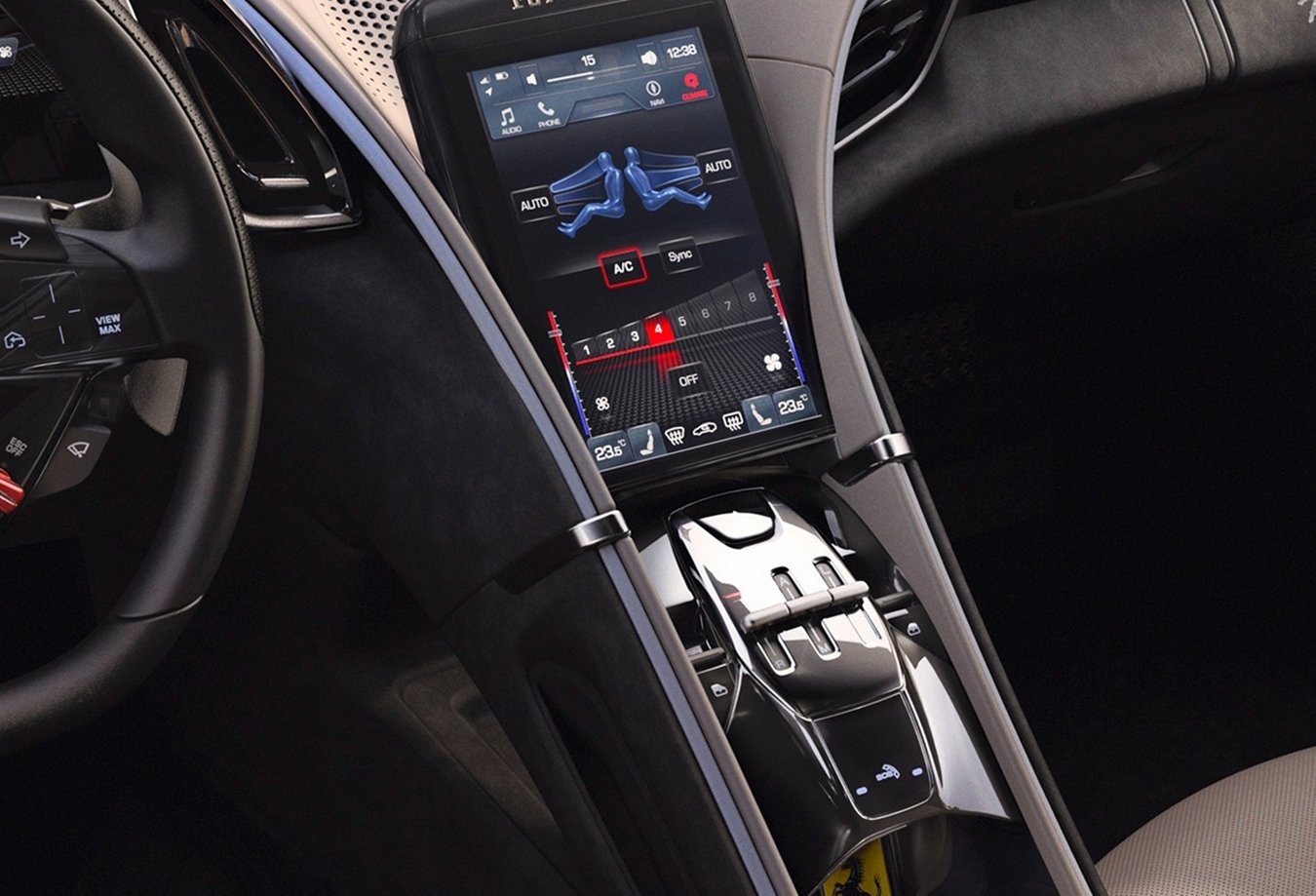 Of course, you might be clamoring to know more about the engine and performance now so that we won’t take any more time. The Roma gets the same 3.9 liters twin-turbo V8 from the Portofino, but Ferrari could not resist in stroking the horsepower count up to 611 bhp while it has also raided its vast technology showcase to sprinkle it all over the Roma. Thus it gets the latest slide-slip control and the 5-stage Manettino system while a new 8-speed dual-clutch gearbox is from the hard-core SF90 Stradale super-car.

Ferrari is also insistent to clearly distinguish its GT and Sportscar range, yet the Roma is undeniably a fast car that cleaves the air with the same relentless pursuit, much like its stable-mates. However, unlike its brethren, the Roma is more subtle about its dynamic talents, as we have mentioned earlier. There is a pop-up spoiler, and a whole host of techno-wizardry going on that enables the Roma to claim a better performance over its more comfort-focused rivals like the Aston Martin V8 Vantage. 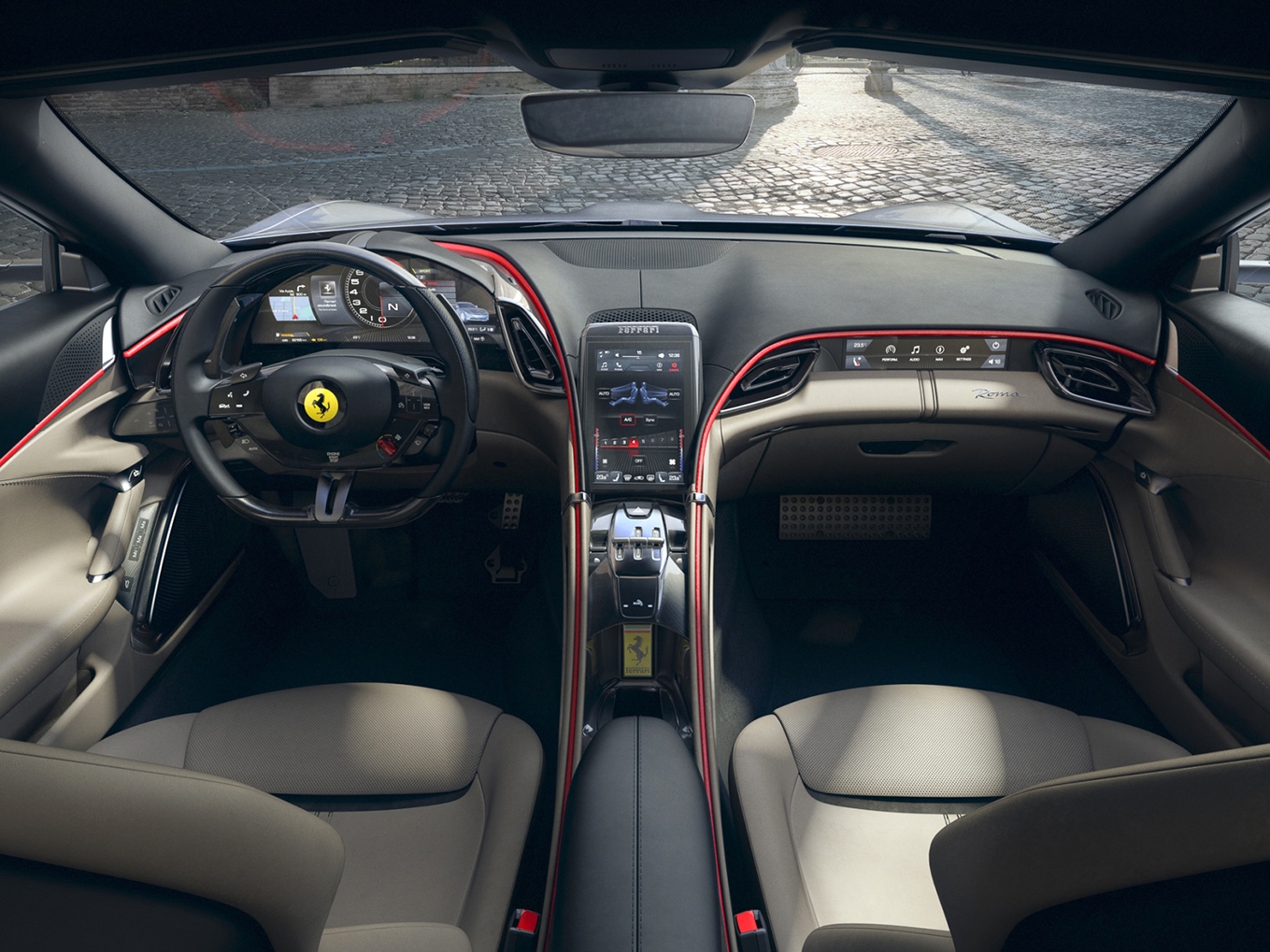 Ferrari claims that the Roma is the most powerful and fun-to-drive V8′ 2+’ in its history and while on the face of it, the technology showcase, luxury, and performance doled out is indeed impressive; for us, it’s the styling and the much more ‘relaxed’ persona that the car exudes is what ultimately seals the deal.

These days, sports cars are more serious and packed to the gunwales with technology, while the fondness for a faster lap-time has corrupted the basic recipe for the GT. The Roma changes that and is a breath of fresh air. The Tifosi can celebrate, the beautiful Ferrari is back…