The daughter of African immigrants, the 25-year-old graduate student didn’t grow up with a strong family connection to the holiday. Juneteenth marks the day a Union general arrived in Galveston, Texas in 1865 and let enslaved Black people know that they had been freed — more than two years after Abraham Lincoln’s 1863 Emancipation Proclamation.

But this year, after weeks of nationwide protests against racism and police violence sparked by the police killing of George Floyd in Minneapolis, Otuomagie decided to head out to a rally near her home in the Brooklyn neighborhood of Bushwick. She not only wanted to celebrate Juneteenth, but to finally join the protests after weeks of isolating due to the coronavirus.

“I’ve been really dealing with a lot of — as everyone has — a lot of anxiety and also just so much stress, to the point that I was physically unable to move,” said Otuomagie, who wore a shirt that read, “Black History Is Now.” “So now, I was like, ‘I’m gonna go out for myself at least once, to come and see what protests look like, what they feel like, how they’re kind of organized and executed.’ I wanted to see that for myself.” 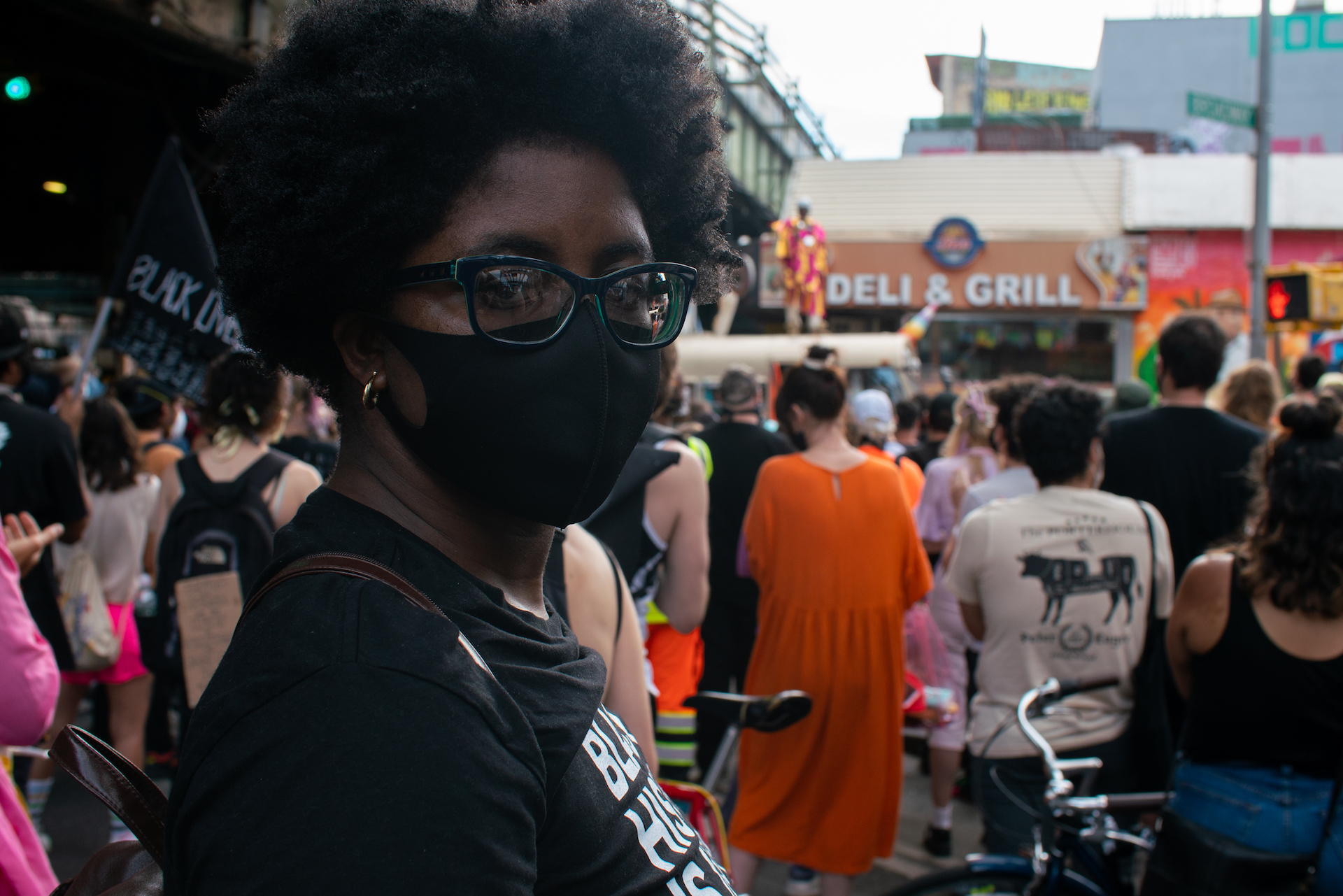 “It’s very soothing to kind of just have a community take a stand, a literal stand,” she added, as people all around her chanted, “No justice, no peace!”

Across New York City, thousands gathered to commemorate Juneteenth and to demonstrate against the systemic racism embedded in U.S. society. And while many have questioned how long the surging movement can sustain itself, at least a handful of the New York protests seemed only more organized, focused, and energized than they had in the initial days on the streets.

A river of thousands of New Yorkers, many dressed in the protester uniform of all black, flooded the streets of downtown Brooklyn in the mid-afternoon. During a short rally in a park, the organizers led the crowd in a somber, call-and-response rendition of “Lift Every Voice and Sing,” often known as the Black national anthem.

“This is Juneteenth!” the organizers yelled, and the crowd clapped and screamed. Many carried ornate signs that recalled Black history. One sign that read, “A man was lynched yesterday” — a reference to a flag that hung outside the NAACP’s New York City headquarters in the 1920s and 30s. Others included paragraph-long quotes from Frederick Douglass and James Baldwin. 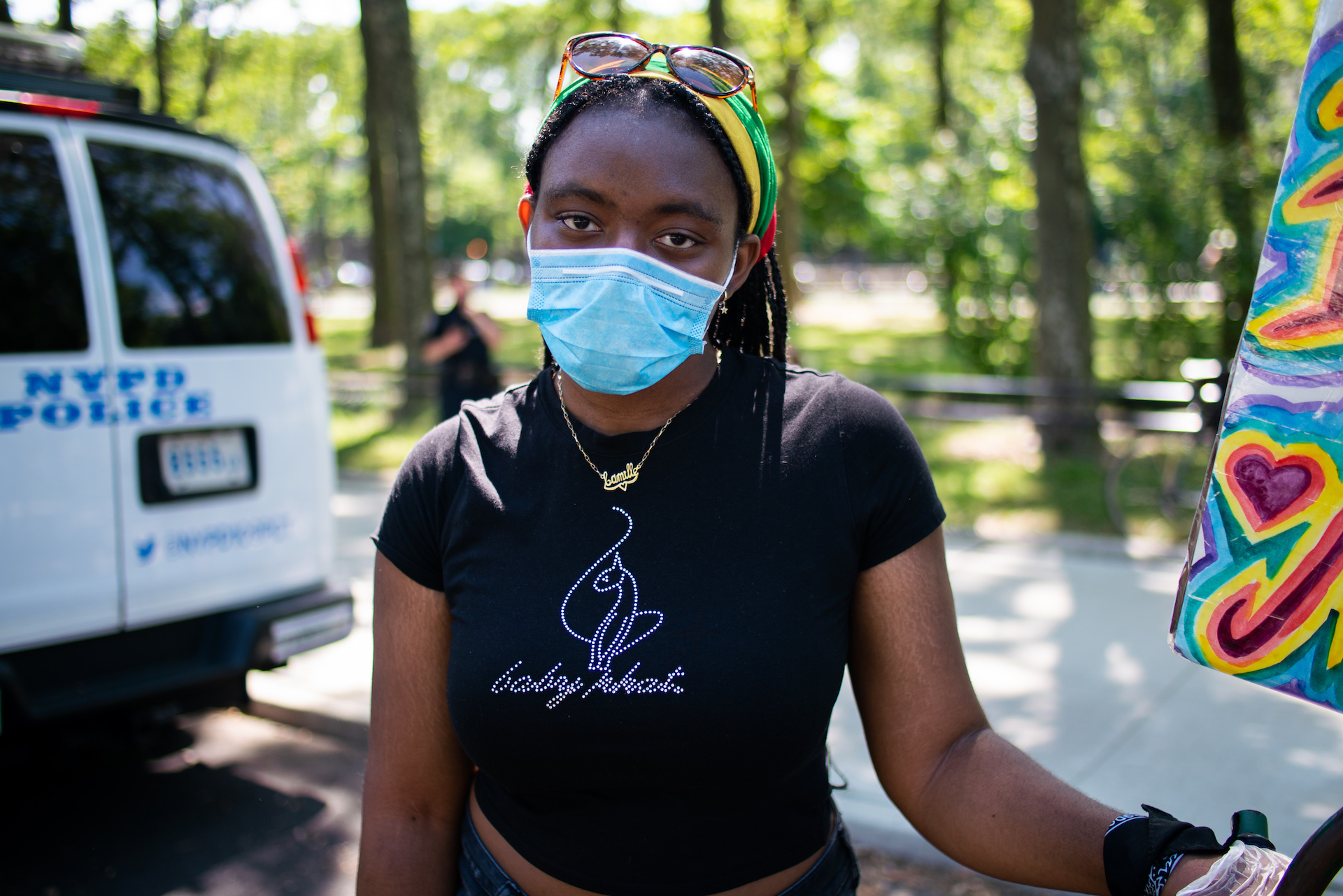 “I came from Bed Stuy and I drove to Park Slope and then we walked all the way here cause we were trying to find the protests.” — Camille A., a college student. (Photo: Joe Hill/VICE News)

Camille A. handed out bottles of water and snacks to the protesters as they started marching through the streets and across the Brooklyn Bridge. She’d injured her feet by protesting too much, but she was determined to help out however she could.

“I don’t think it’s going to stop anytime soon. People are fed up.”

“I don’t think it’s going to stop anytime soon,” said the 18-year-old college student, who declined to use her last name. “People are fed up.”

The marchers banged drums in tune to chants of “How do you spell racist? NYPD!” and “Say her name! Breonna Taylor!” Dozens of police officers lined the crowd, watching warily. A helicopter whirred overhead. 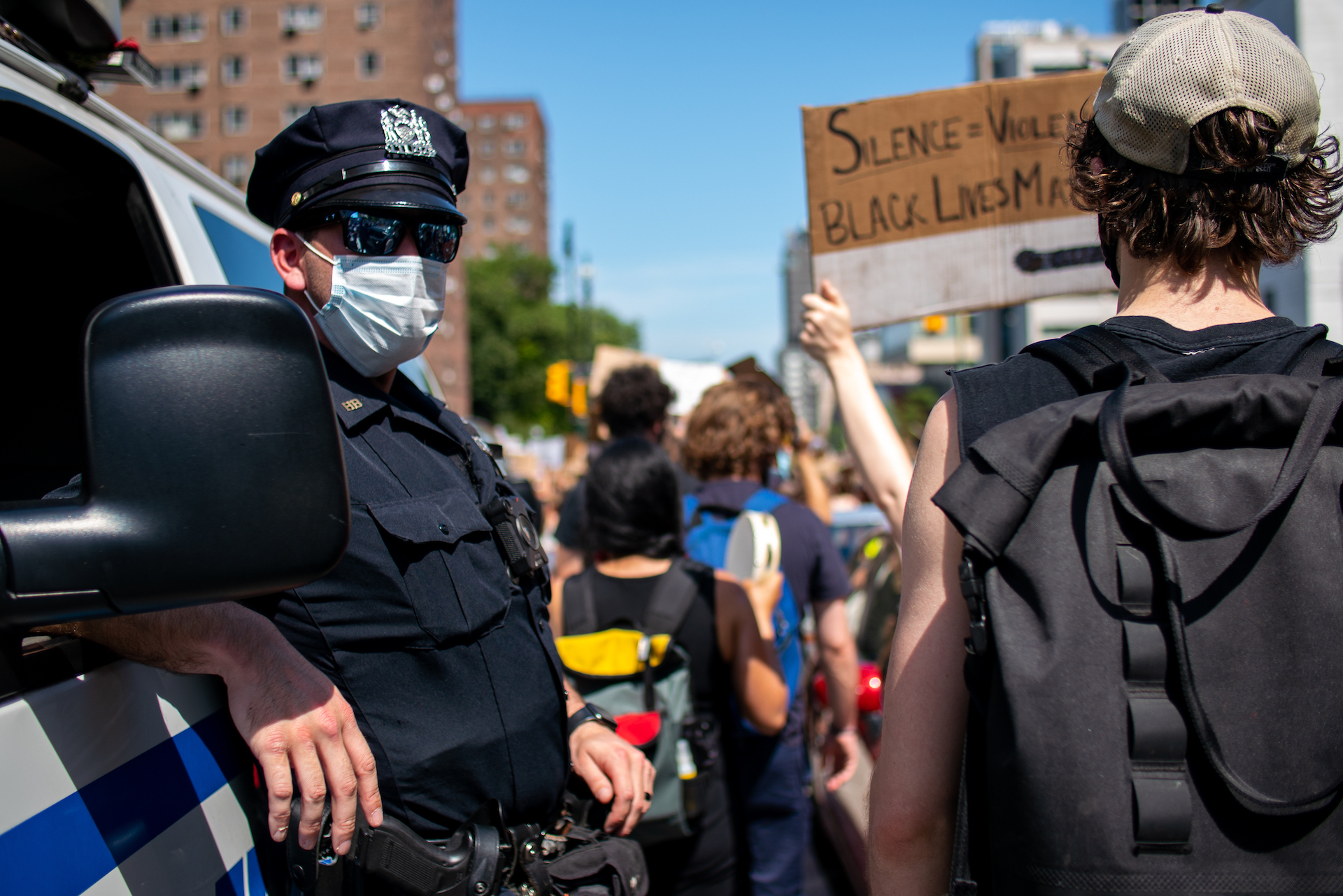 The New York Police Department has arrested more than 2,000 people during the protests. But Black and brown people have made up the vast majority of people who have been arraigned by a judge on charges connected to the demonstrations, VICE News reported earlier this week, based on early data and accounts from public defenders.

On Friday, the Manhattan district attorney released data that confirmed much of that reporting. Of the 484 people arraigned on what the office called “protest and ‘looting’ related cases” between May 28 and June 4, 343 — or 71% — were Black. Another 99 people were “Black-Hispanic” or “White-Hispanic,” according to the office.

Just 6% of people arraigned in connection to the protests were white.

Not every gathering, however, was explicitly intended to combat police violence. In the Bronx, in front of the Claremont Neighborhood Center, a small crowd hunched over paint rollers and brushes to fill in a blocklong mural that declared, in stark white letters, “BLACK LIVES MATTER.” The mood was celebratory but calm, as the painters — many of them strangers to one another — worked diligently in the slight breeze.

“It’s coming out beautiful!” bellowed one man as he stood on a chair next to the mural. 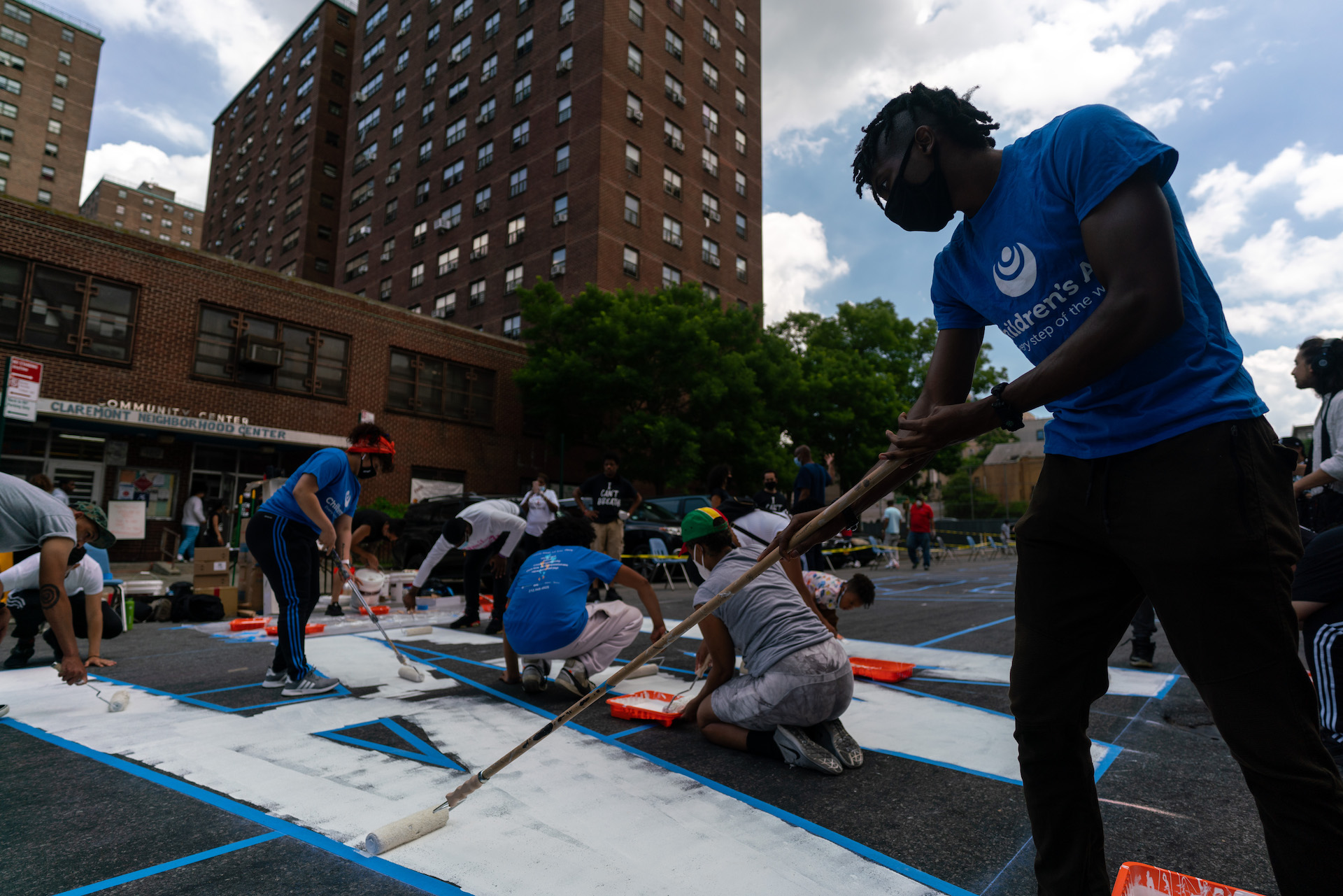 Similar “BLACK LIVES MATTER” murals have popped up across the United States in recent weeks, after Washington D.C. mayor Muriel Bowser commissioned the words to be painted in front of the White House, in bright yellow letters. But Imani Shanklin Roberts, an artist who helped facilitate the mural, said that the Bronx version spoke to the fact that Black Lives Matter, as a movement, isn’t simply about halting police racism.

It’s also about leaving a lasting mark on a community.

It’s “more important for us to matter to each other than for us to matter to the government, policy makers, the president, even police officers,” Shanklin Roberts said. “It’s more important that these messages are seen within our community, rather than in the middle of downtown D.C., or in the front of the courthouse, where we don’t frequent — or if we’re there it’s by accident or because of some terrible reason.” 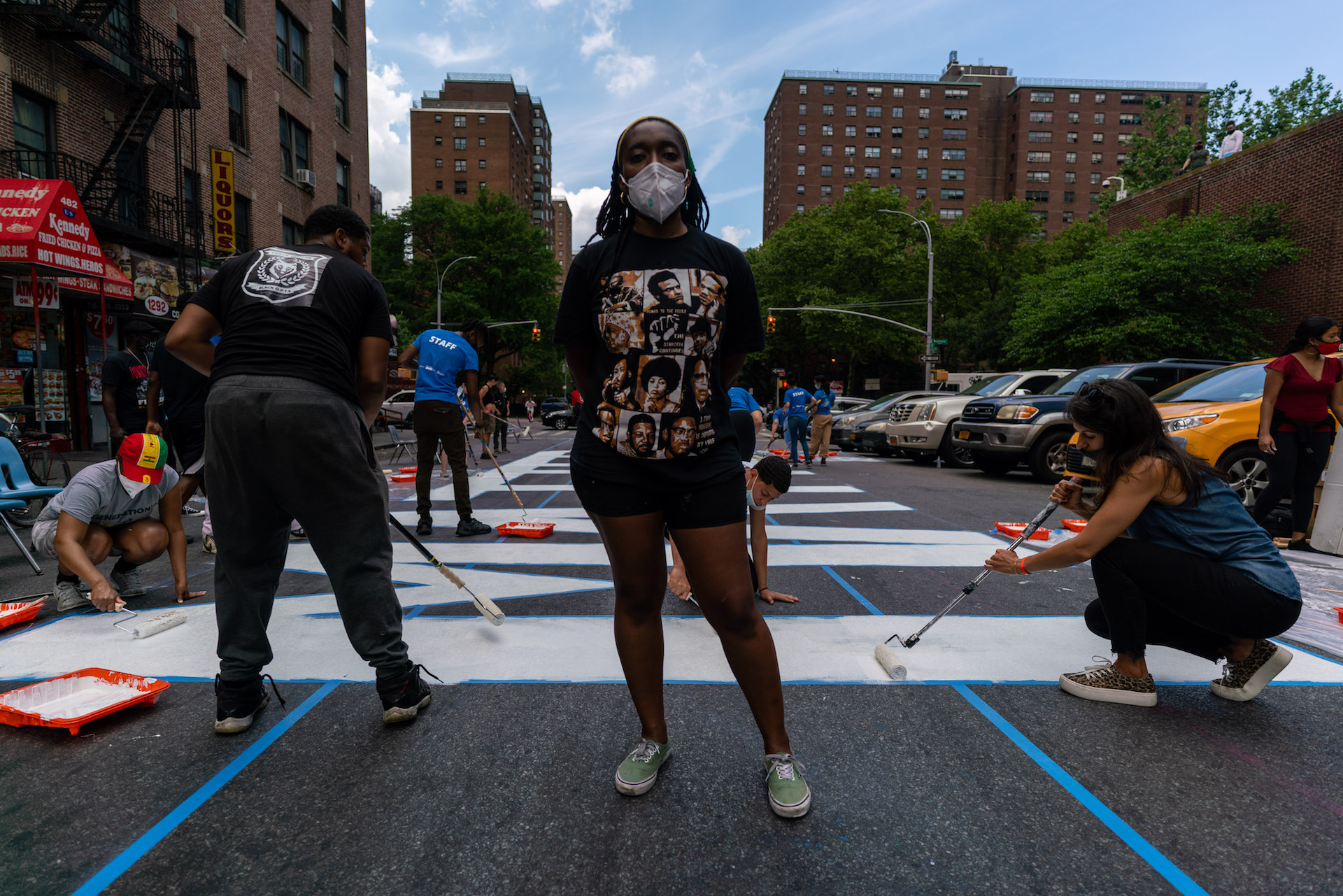 Shane Adams had been working on a food drive for a nearby middle school when he happened across the mural. For him, working on it felt like joining a family gathering.

“A lot of people thought this was gonna be a two-week thing,” Adams said of the protests. “I love seeing that people have not forgotten. Every day, I see a new protest. Every day, I see people working in their communities to get their voices heard.”

“I never felt this in my entire 20 years of living, this sense of family, this sense of community. It’s really empowering. It makes anybody smile,” he said. “I can’t stop smiling.” 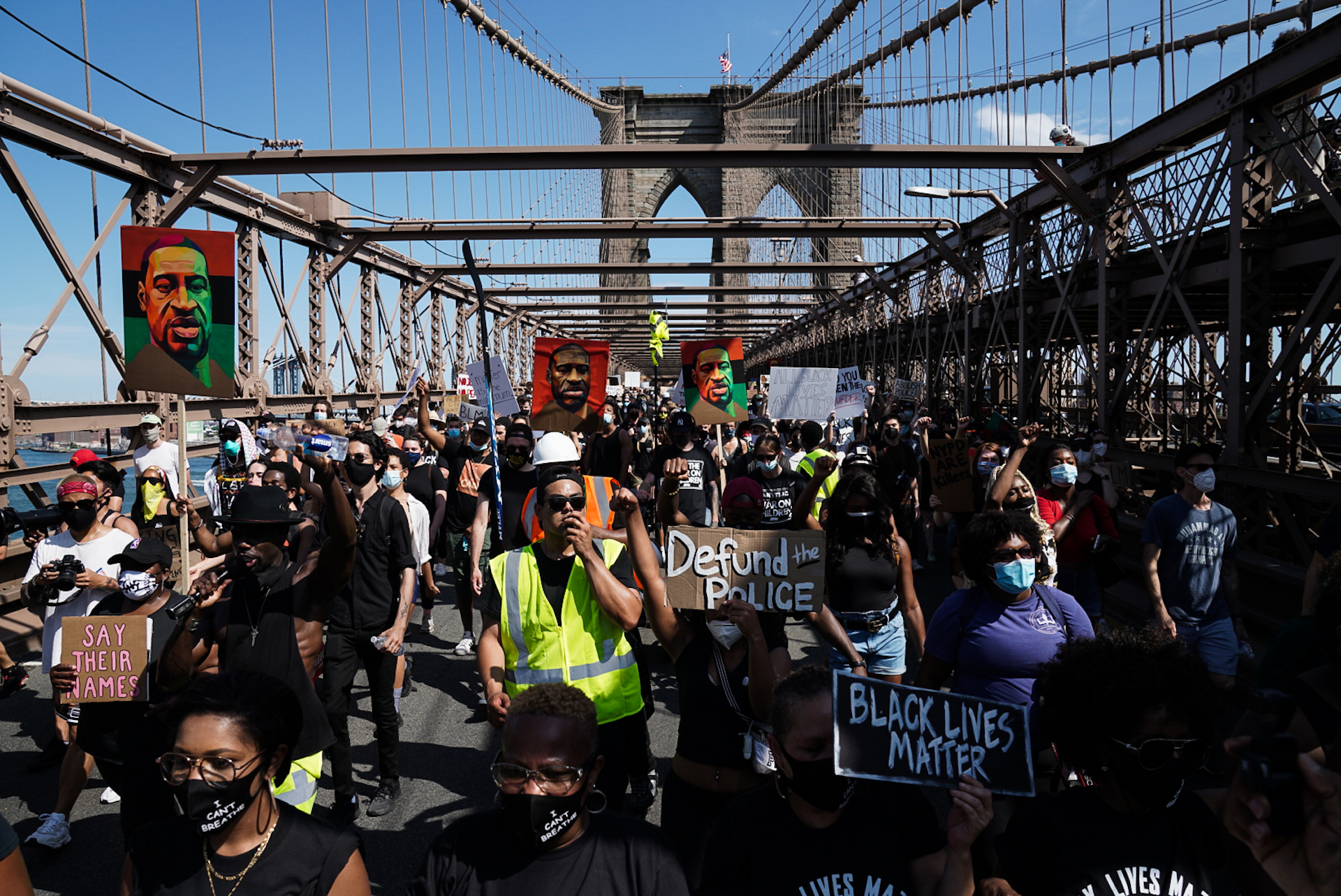