But Trump’s chaotic attempts to both block the memoir and undermine its contents should be no mystery: The book is damning. Bolton, Trump’s former national security advisor, portrays the president spinning in crazed ignorance and obsessed with winning a second term above all else, to the point of begging China to help.

The central thrust of Bolton’s book is that the inside of Trump’s White House is even more dysfunctional than it looks from the outside. And Bolton’s telling is almost ridiculously detailed, down to the exact minute he took a given phone call.

Trump was willing to block criminal investigations to “give personal favors to dictators he liked,” Bolton writes. “The pattern looked like obstruction of justice as a way of life.”

Democrats are outraged Bolton didn’t speak up about all this back when they impeached Trump for trying to force Ukraine to dig up dirt on Trump’s 2020 Democratic rival Joe Biden (which, Bolton says, yeah, totally happened).

“John Bolton may be an author, but he’s no patriot,” said Rep. Adam Schiff, a Democrat who helped lead impeachment efforts last winter. Democrats say Bolton’s revelations are too big to ignore. But they’re livid about being asked to pay $32.50 for his book when they wanted his testimony under oath last winter for Trump’s impeachment.

There’s a lot crammed into the 592 pages. But here are the greatest hits.

Trump asked China to help him win the 2020 election.

Trump explicitly linked the purchases with his reelection, Bolton writes. Trump offered to keep U.S. tariffs at 10%, instead of the 25% he’d threatened, if Xi would play ball.

“He stressed the importance of farmers, and increased Chinese purchases of soybeans and wheat in the electoral outcome,” Bolton writes. Trump sat there “pleading with Xi to ensure he’d win.”

In other words, Trump offered to trade a huge national policy concession to a foreign adversary for help winning reelection.

Asking foreigners for “a thing of value” to help with a U.S. political campaign is a violation of law, according to Federal Election Commissioner Ellen Weintraub.

Trump also told Xi that China’s policy of building concentration camps for its Uighur Muslim population was “exactly the right thing to do,” Bolton writes.

Secretary of State Mike Pompeo presents himself as one of Trump’s most loyal deputies. But the book portrays Pompeo as struggling through a constant state of disbelief at Trump’s weird bumblings.

During Trump’s famous summit with North Korea’s Kim Jong Un in 2018, Pompeo passed Bolton a note slamming Trump: “He is so full of shit.”

Bolton depicts Trump’s former chief of staff, John Kelly, as pretty much suffering a permanent headache during his time in the White House. Kelly was typically the first to see Trump in the morning, and the last to see him at night.

“You can’t imagine how desperate I am to get out of here,” Kelly tells Bolton. “This is a bad place to work, as you will find out.”

Trump is impossible to brief.

No one can brief Trump, according to Bolton.

“Much of the time was spent listening to Trump, rather than Trump listening to the briefers,” Bolton writes. “I made several tries to improve the transmission of intelligence to Trump, but failed repeatedly. It was what it was.”

Bolton’s initial attempt, on North Korea, showed the challenge: “Trump, set off by a comment that we had no better ally than Japan, jarringly complained about Japan’s attack on Pearl Harbor. Things went downhill from there.”

Trump complains in private that he’s been too tough on Russia.

Trump boasts publicly that he’s been tougher on Russia than his predecessor, former President Barack Obama.

But in private he’s prone to “extended grumbling and complaining” about his own administration’s sanctions on Russia.

After Washington slapped sanctions on Russia over the poisoning of former Russian spy Sergei Skripal in the UK, Trump ordered Pompeo to call up Russia’s foreign minister Sergei Lavrov and make sure the Kremlin knew it wasn’t Trump’s idea.

“Trump told Pompeo to call Lavrov and say ‘some bureaucrat’ had published the sanctions — a call that may or may not have ever taken place,” Bolton writes.

Bolton says he never quite understood Trump’s thinking on Russia, but feared Russia’s savvy president Vladimir Putin would get whatever he wanted out of Trump when they were alone together behind closed doors.

Trump asked Kelly if Finland is part of Russia.

This one’s a touchy subject in that part of the world: The Soviet Union invaded neighboring Finland in 1939 and claimed a chunk of territory, in what’s called The Winter War.

Finns have been outraged about Trump’s question since it leaked out from Boltons’ book a few days ago. Moscow had to announce that it has no plans to invade Finland anytime soon.

Yes, Trump tried to swap military aid to Ukraine for an investigation of Joe Biden.

Bolton confirms the central thrust of Democrats’ impeachment case against Trump last winter, saying Trump explicitly told him that he wanted to hold up $391 million in military assistance until he got the dirt on Biden and his 2016 Democratic opponent Hillary Clinton.

“He said he wasn’t in favor of sending them anything until all Russia-investigation material related to Clinton and Biden had been turned over,” Bolton writes. “We had talked to Trump between eight and ten times to get the money released.”

This passage shows Bolton could have offered up just such an account. But he saved it for the book.

Trump told people that Venezuela is “really part of the U.S.” and “insisted on military options” for ousting Venezuelan president Nicolás Maduro.

At one point, Trump berated his generals for having troops in Afghanistan and Iraq, but not Venezuela.

Trump said his big summit with Kim Jong Un was all for show.

Trump hailed his Singapore summit with North Korea’s Kim as a diplomatic break-through that utterly removed the threat of the North’s nuclear weapons program.

But Bolton says Trump knew full well that was nonsense. He quotes Trump as saying: “This is an exercise in publicity.”

“He was prepared to sign a substance-free communique, have his press conference to declare victory, and then get out of town,” Bolton wrote. “It was risky theatrics.”

Trump then obsessed for months over sending Kim an Elton John CD.

Trump fixated on giving the North Koreans little gifts, including standard-issue White House trinkets, like boxes of cufflinks, even though these were technically violations of U.S. sanctions that required retroactive exemptions.

After meeting Kim in Singapore, Trump became focused on having Pompeo hand-deliver a CD copy of Elton John’s hit, “Rocket Man,” which Trump had autographed. (Trump had mocked Kim as “rocket man” on Twitter before their relationship improved.)

“Getting this CD to Kim remained a high priority for several months,” Bolton writes.

Bolton and Pompeo effectively stopped a second meeting from happening, because they considered the Singapore summit to have been such a disaster. The U.S. gave a lot away, including halting military exercises with South Korea, and got nothing in return, in Bolton’s view.

“This ongoing criminal investigation threatened Erdogan himself because of allegations he and his family used Halkbank for personal purposes,” Bolton writes.

Erdogan gave Trump a letter saying the bank did nothing wrong.

Trump quickly looked it over and then declared that “he believed Halkbank was totally innocent of violating U.S. Iran sanctions,” Bolton writes. Trump said he’d help stop the investigation once he could replace the leadership of the prosecutors’ office in the Southern District of New York.

“Trump then told Erdogan he would take care of things, explaining that the Southern District prosecutors were not his people, but were Obama people, a problem that would be fixed when they were replaced by his people,” Bolton writes. “Of course, all of this was nonsense,” since the prosecutors were career DOJ employees.

Trump asked Bolton to praise him on TV more.

Trump called after Bolton appeared on Sunday talk shows and said that “I needed to praise him more,” Bolton writes.

Trump’s trade policy discussions involved getting his top advisors together in a room and making them fight it out, Bolton writes, without getting lower-level coordination between the agencies.

Even the famously combative Bolton thought this was dumb.

“Trump’s favorite way to proceed was to get small armies of people together, either in the Oval Office or the Roosevelt Room, to argue out these complex, controversial issues,” Bolton writes. “Over and over again, the same issues. Without resolution, or even worse, one outcome one day and a contrary outcome a few days later. The whole thing made my head hurt.”

Trump believes he can stop leaks from his White House by putting journalists in jail until they confess to their sources, Bolton writes. It’s one of Trump’s “favorite legal gambits,” according to Bolton. “Only then would the leaks stop,” Bolton writes.

“These people should be executed. They are scumbags,” Trump said, according to Bolton.

Trump, of course, has threatened Bolton with “criminal problems” over this very book.

Cover: U.S. President Donald Trump speaks to members of the media as National Security Adviser John Bolton listens during a meeting in the Oval Office of the White House August 20, 2019 in Washington, DC. (Photo by Alex Wong/Getty Images) 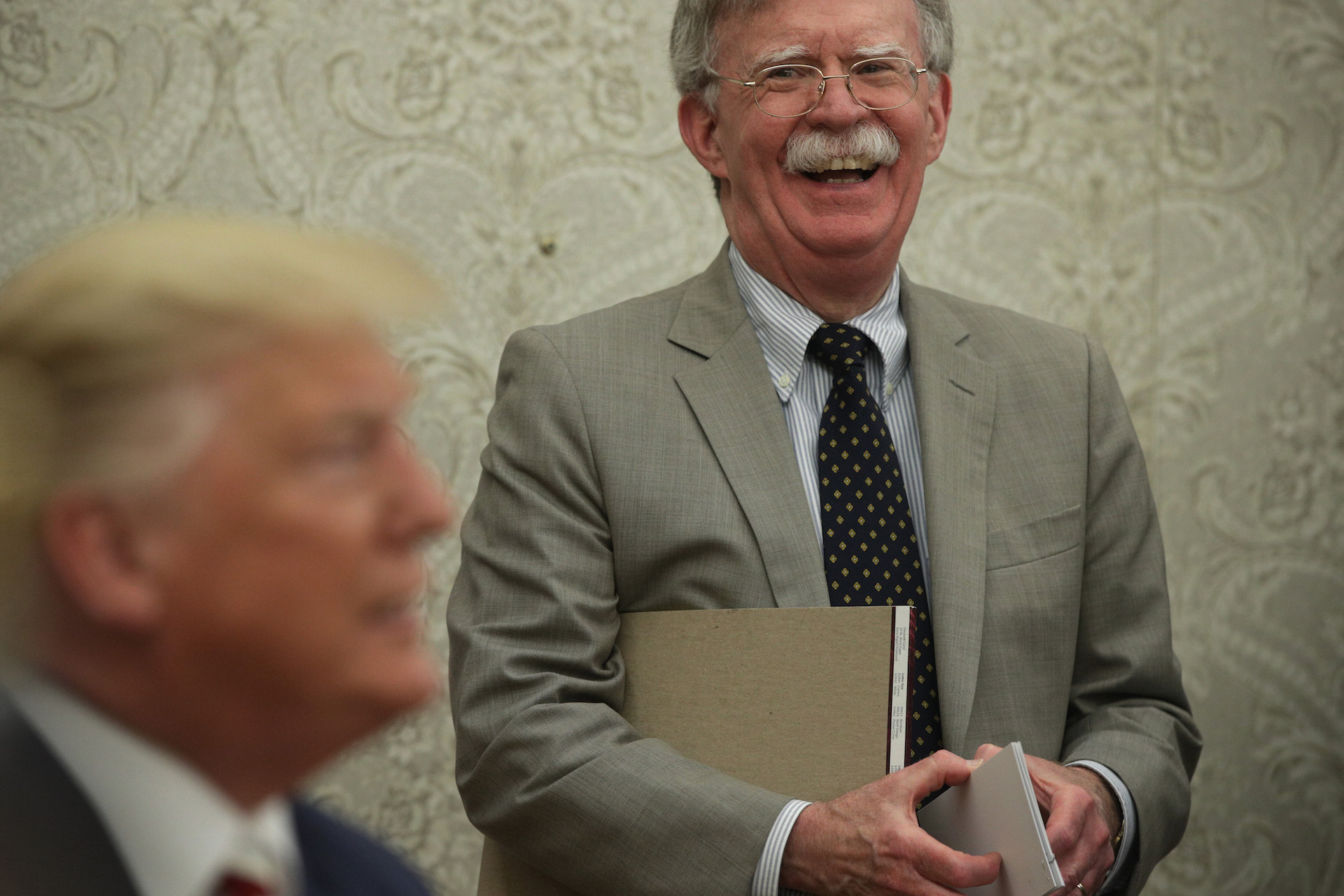 Qualities to Look For When Buying a Roof Top Tent