It was another really bad weekend for monuments to racists.

From Paris to Raleigh, North Carolina, statues were removed in a number of ways—calmly removed by governments, pushed over by protesters, defaced with red paint, and in one case even hanged from a signpost—as the global reckoning with white supremacy that began with George Floyd’s killing continues.

In Raleigh on Friday night, protesters forcibly removed two statues of Confederate soldiers from a 75-foot Confederate monument on the grounds of the state’s old Capitol building. One was strung up from a signpost, while another was left outside of the county courthouse.

The Republican-led state Legislature moved in 2015 to ban the removal of statues on state grounds without approval from a state historical commission. But on Saturday, Gov. Roy Cooper, a Democrat, ordered two more statues and the entire monument itself to be taken down for public safety reasons.

“Monuments to white supremacy don’t belong in places of allegiance, and it’s past time that these painful memorials be moved in a legal, safe way,” Cooper said in a tweet.

As of Monday morning, three more statues had been removed, and crews were working to take down the final monument.

North Carolina wasn’t the only place where statues to racists had a rough weekend.

The Museum of Natural History announced on Sunday that it would remove the statue of former President Theodore Roosevelt riding a horse (while flanked by two anonymous African and indigenous American men) from its front steps.

“While the Statue is owned by the City, the Museum recognizes the importance of taking a position at this time,” the museum said in its announcement. (Mayor Bill de Blasio later backed the move.) “We believe that the Statue should no longer remain and have requested that it be moved.”

On Friday, protesters in the nation’s capital toppled a statue of Albert Pike, a Massachusetts-born, pro-slavery Confederate Army officer who’s rumored to have aided in the founding of the Ku Klux Klan.

Last year, Delegate Eleanor Holmes Norton, a Democrat, introduced a bill to remove the statue, one which so far hasn’t gone anywhere. In a tweet, Trump called for the arrest of the protesters.

While Key was a slave owner who tried to use the law to strangle the abolitionist movement and Serra played a key role in the colonization of California—another statue of Serra fell in Los Angeles this weekend—some questioned the toppling of Grant’s statue, given his role in crushing the Confederacy and prioritization of Reconstruction as president.

But Grant wasn’t perfect, either: As president, he launched an illegal, bloody conflict against the Lakota people over resources and lied to the country about it, as Smithsonian wrote in 2016. And as a general in the Civil War, Grant issued an order expelling Jews from the Union military district encompassing parts of Tennessee, Mississippi, and Kentucky.

On Monday, statues in Paris honoring philosopher Voltaire and general and French imperialist Hubert Lyautey were splashed with red paint.

Last week, French President Emmanuel Macron spoke out against the removal of statues. “I will be very clear tonight, compatriots: The Republic won’t erase any name from its history. It will forget none of its artworks, it won’t take down statues,” Macron said during a televised address on June 14.

Cover: The statue of a Confederate soldier and plinth sit on a flatbed truck at the Old Capitol in Raleigh, N.C., on Sunday, June 21, 2020. After protesters pulled down two smaller statues on the same monument Friday, North Carolina Gov. Roy Cooper ordered the removal of several other monuments to the Confederacy, citing public safety concerns. (AP Photo/Allen G. Breed) 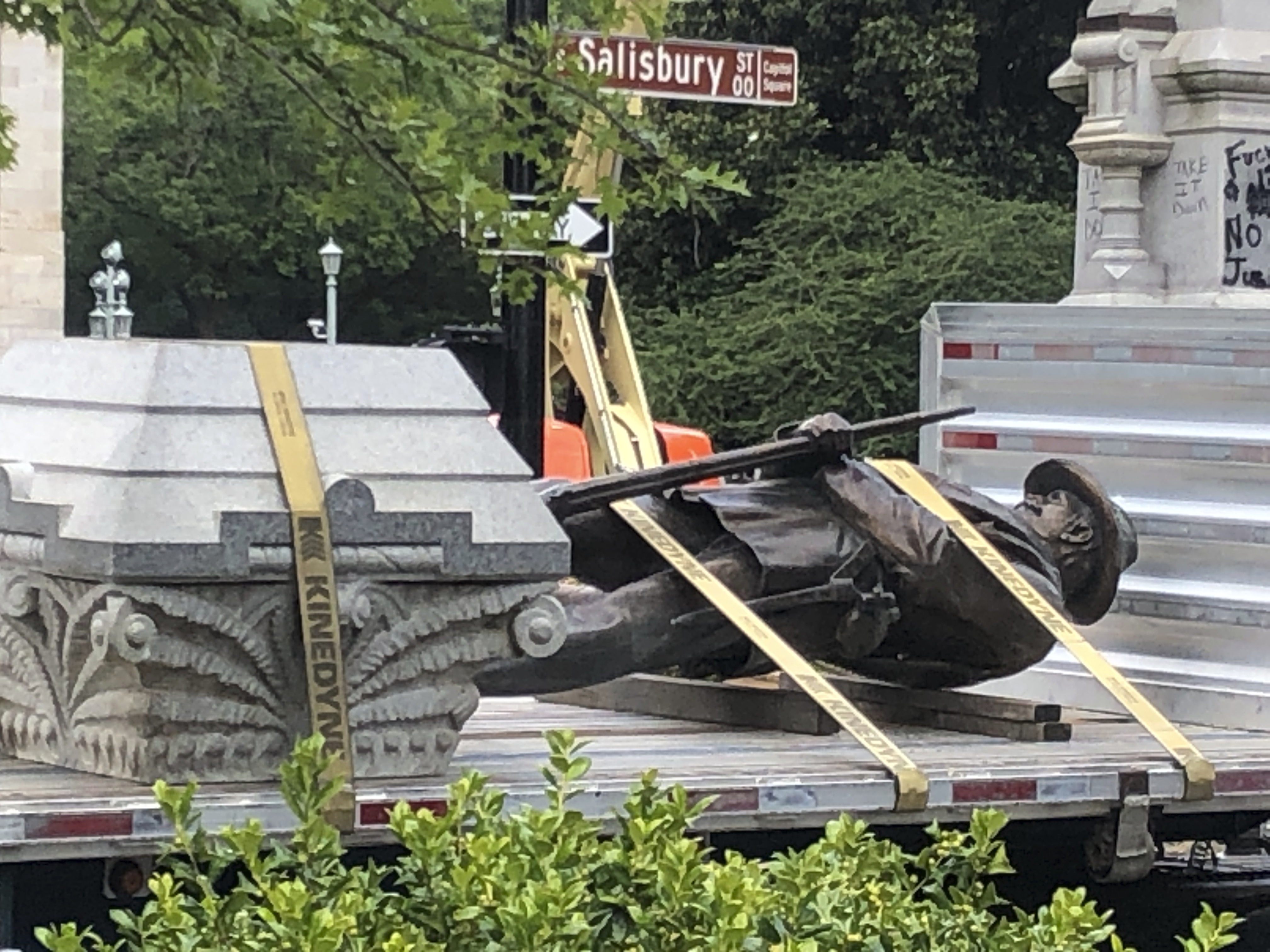 ‘My business will close if I can’t reopen soon’