The U.S. military appears to have a brewing boogaloo problem. Active-duty military are flocking to online networks frequented by the anti-government movement, known for its meme culture and Hawaiian shirt-clad adherents, who are often called Boogaloo Bois.

“Boogaloo” is code for civil war, which is the ultimate goal of the movement, and some of its followers trade in memes glorifying violence against federal agents and crack jokes about the impending “Boog.” Recently they’ve become regular fixtures at anti-lockdown and Black Lives Matter protests in states that allow open-carry of military-style firearms.

An analysis of some of the largest private Facebook groups catering to the boogaloo movement found that scores of members self-identified as active-duty military on their personal profiles. Members spanned an array of branches, including the Marine Corps, Army, Navy, and Air Force, and a range of positions, from infantryman, to mechanic, to army bus driver, to medic, to “amphibious assault crewman.”

Some of the most active online boogaloo communities are on Discord, a platform popular among gamers. There, members have been discussing ways to co-opt protests against racism and police brutality to advance their own agenda. And current or former military have chimed in with their expertise, from the best gas masks to military-grade firearms, according to screenshots provided to VICE News.

“I was not particularly surprised to see current and former military members involved in boogaloo groups online,” said Megan Squire, a professor of computer science at Elon University who tracks how extremist groups operate online. “The question for me right now is whether military men are attracted into online groups or whether they are forming groups themselves. Which direction is the influence going?”

One member of the Discord who claimed to be a member of the National Guard even discussed his upcoming deployment to Philadelphia in response to the protests. 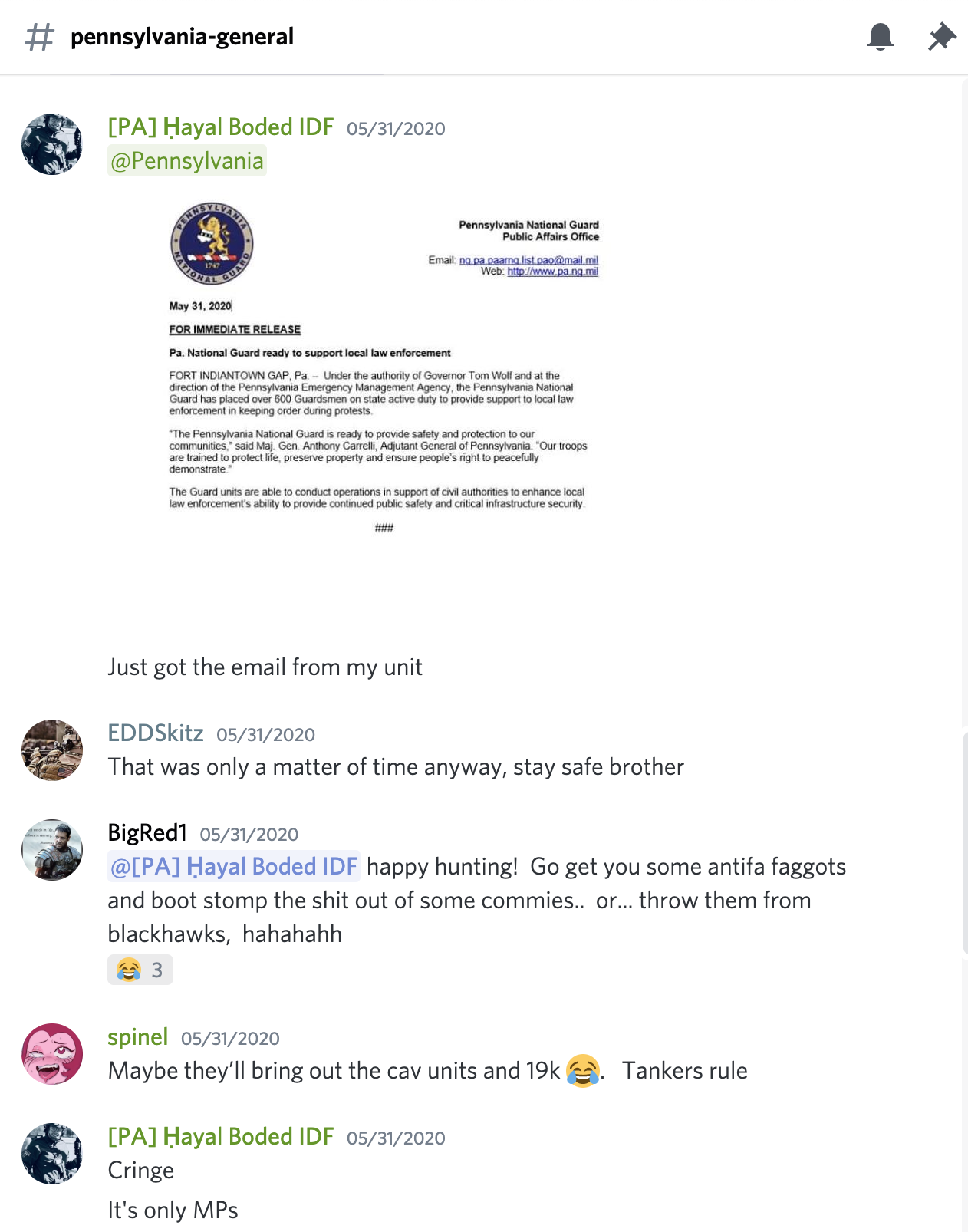 Another joked that he was torn between informing his commanding officer about conversations taking place on the boogaloo server and divulging military information to his fellow Boogaloo Bois. 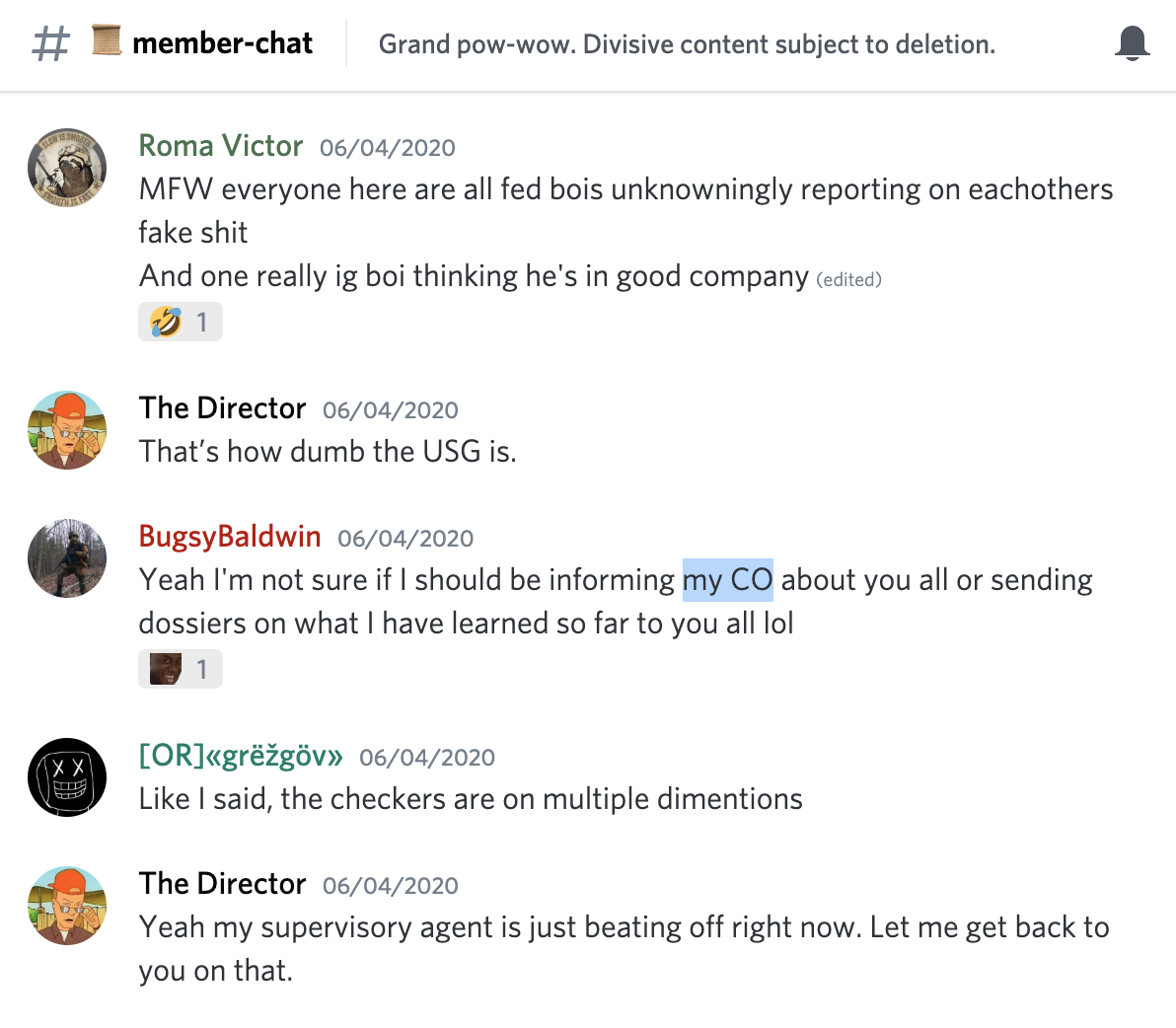 Meanwhile, there’s growing concern among intelligence officials about the public-safety risk posed by the boogaloo movement. In late May, the Department of Homeland Security warned law enforcement around the country that “anarchist and militia extremists” could try to exploit the protests against police brutality with the goal of sparking the “boogaloo,” Politico reported.

In early June, the FBI arrested three “Boogaloo Bois” — an army reservist, a Navy veteran, and an Air Force veteran — for allegedly planning to throw explosives into a Black Lives Matter protest in Las Vegas to sow confusion and chaos.

On June 15, authorities issued an intelligence assessment warning that “violent adherents of the boogaloo ideology” could target Washington D.C. due to the “significant presence of U.S. law enforcement entities.”

Carrillo, who was already in custody for allegedly killing a sheriff’s deputy, allegedly had ties to the Boogaloo movement. Investigators said they found explosives, firearms, and a tactical vest with a boogaloo patch on it inside his van. They said he’d also used his own blood to scrawl slogans associated with the boogaloo movement, including “BOOG,” on the hood of the white van.

Prosecutors say that Carrillo sought to exploit the pain and suffering driving the protests against police brutality to advance the goals of the boogaloo movement.

“We have mobs of angry people to use to our advantage.”

“Go to the riots and support our own cause,” Carrillo allegedly wrote on Facebook the day of the ambush on the federal officer. “Use their anger to fuel our fire. Think outside the box. We have mobs of angry people to use to our advantage.”

It’s hard to square the violent anti-government aspirations of the boogaloo with the oath of induction taken by military personnel to protect the U.S. and enemies “foreign and domestic.” But the involvement of service members in anti-government extremist movements is nothing new, said Kathleen Belew, Assistant Professor of History at the University of Chicago and author of ‘Bring the War Home: The White Power Movement and Paramilitary America.’

Active-duty service members or veterans have the potential to “dramatically escalate the impact of fringe activism, pass on explosives expertise, urban warfare expertise,” said Belew, which is why extremist groups have long-sought to radicalize and recruit those individuals.

“This is not a problem we should take lightly,” said Belew.

While the percentage of active-duty military and veterans who fall into extremist movements is very small compared to the community as a whole, the combination of military expertise and radical ideology can be dangerous.

“When [the Boogaloo Bois] say they want to bring about a civil war, a lot of people laugh that off because it seems like the kind of thing that would never happen,” said Belew. “But people with those ideas have killed people. They’ve bombed people. They’ve killed scores if not hundreds of bystanders. So we have to take this seriously.”

For example, the Oklahoma City bomber who killed 168 people in 1995 was a Gulf War veteran who, like the Boogaloo Bois, was seeking revenge against the federal government for the 1993 Waco siege.

More recently, the military has grappled with hardcore “accelerationist” neo-Nazis infiltrating their ranks. This week, an American soldier was arrested for allegedly colluding with a satanic neo-Nazi group in a plot to bomb his own unit. Last year, another soldier was arrested for allegedly sharing bomb-making materials online in neo-Nazi forums and plotting to blow up a major news network.

And yet, Belew says that the military has repeatedly failed to weed out extremist ideas from its own ranks, and that Pentagon policy has consistently lagged behind the problem.

“The Department of Defense is aware of the boogaloo movement.”

“The Department of Defense is aware of the boogaloo movement,” spokesman Lt. Col Uriah Orland told VICE News in an email.

Under Department of Defense policy, military personnel are not allowed to “actively advocate” or “actively participate” in supremacist, extremist or criminal gang doctrine, ideology, or causes.

Examples of “active participation” can include fundraising, rallying, recruiting, training, organizing, distributing material (including online), wearing “gang colors or clothing,” or otherwise engaging in activities that advance the goals of gangs or organizations that are “detrimental to good order, or mission accomplishment or are incompatible with military service.”

As for whether the Pentagon is concerned about possible radicalization of service members, Orland said that they’re “concerned with any behavior that is contrary to the professional standards expected of all service members and DoD employees.”

The boogaloo movement poses a unique challenge to the military.

For starters: it isn’t a formal group. Rather, it’s an ideological umbrella that’s pulled in a range of identities, from hardline libertarians, anti-government extremists, online shitposters, and some white nationalists. This has made it difficult to quantify and to track. On one end of the spectrum, you have teens making memes about civil war on TikTok; on the other, there are potentially dangerous extremists getting radicalized by those same memes.

A range of commitment is a common feature of extremist movements especially when there’s a “fashion” aspect that draws people in. For example, in the 1920’s, the Ku Klux Klan was able to attract women to its ranks through its robes which were considered “fashion-forward” at the time and the prospect of belonging to a membership club. The rise of the militia movement in the 1980’s was associated with camouflage fatigues. Members of the Proud Boys are easily identifiable by their Fred Perry shirts. White nationalist groups like Identity Evropa (since rebranded to “American Identity Movement”) made white polo shirts and khakis their uniform.

This reminds Belew of the Hawaiian shirts that have become a staple of the boogaloo movement.

“What we have to listen to is the intent of the activism, and assume even though there will be casual and peripheral members who maybe aren’t committed to violence, there is a dedicated core carrying out a range of violent attacks across the country,” she said. “And it’s a coordinated attack on both democracy and protesters.” 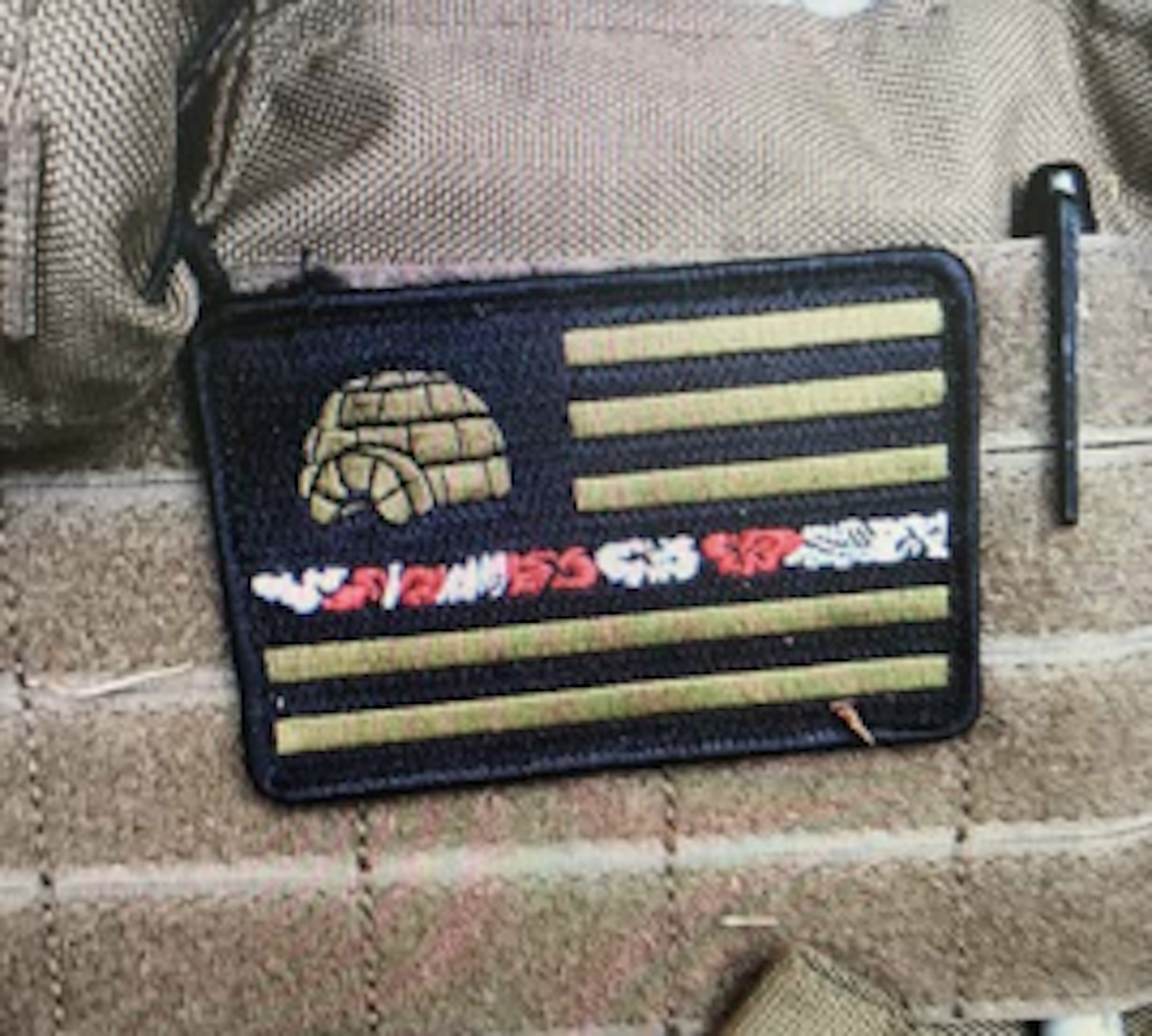 Driving Documentation: How To Get A Roadworthy Certificate