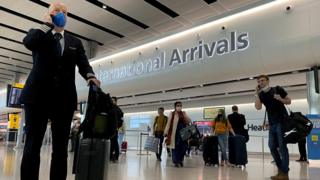 Portugal’s foreign affairs minister has said his country’s exclusion from a list of countries for which quarantine will not apply for people returning to England is “absurd”.

Augusto Santos Silva told the BBC not including Portugal was “senseless and unfair”.

The list of countries exempt from quarantine was published on Friday.

Boris Johnson said 14-day quarantines would remain for countries where the virus was not under control.

Other countries excluded from the list, which comes into effect on 10 July, include the US, China, the Maldives and Sweden.

Mr Santos Silva told BBC Radio 4’s PM programme: “We are very disappointed with the decision of the British authorities. We think it is senseless and unfair.

“It is quite absurd the UK has seven times more cases of Covid-19 than Portugal so we think this is not the way in which allies and friends are treated.”

The Portuguese Prime Minister, António Costa, tweeted comparing the UK’s number of coronavirus cases with that of the Algarve, saying: “You are welcome to spend a safe holiday in the Algarve.”

Labour shadow transport minister Jim McMahon said people up and down the country were keen for the quarantine measures to be lessened but said “this is a mess”.

“First we had the quarantine that they were slow to implement, then they said they’d do air bridges,” he said.

“Now we see a plan to let residents of 60 or more countries into England without any reciprocal arrangements.”

Scotland and Wales are yet to decide whether to ease travel restrictions and described the changes as “shambolic”.

The quarantine rules will also remain in place in Northern Ireland for visitors arriving from outside of the UK and Republic of Ireland.

Some of those on the list include popular short-haul destinations such as Turkey and Cyprus, as well as long-haul locations including Australia, Barbados, Hong Kong, Japan, New Zealand and Vietnam.

However, some countries will require visitors to isolate on arrival or will bar them from entering at all.

A list of countries which will be exempt from the Foreign Office’s advice against “all but essential travel” from Saturday has also been published.

The Foreign Office is expected to update its travel guidance on Saturday, including naming which countries will have a reciprocal arrangement with the UK and not require British visitors to quarantine on arrival.

The introduction of the quarantine on 8 June was met with criticism from the travel, tourism and hospitality industries and the easing of restrictions on arrivals from some countries has been welcomed.