TikTok is pulling out.

Facebook, Google, Microsoft, Twitter, WhatsApp, and Zoom have all said they will stop complying with government orders to hand over data — a move that will likely see them blocked.

And on Tuesday the government in Hong Kong was granted sweeping powers to censor, block, and erase online content while secretly tracking your digital footprints.

It’s been less than a week since Beijing’s draconian new national security law came into effect, but already Hong Kong’s online world has been altered dramatically.

“We are already behind the de facto firewall,” said Charles Mok, a lawmaker representing the technology sector, tweeted.

For ordinary citizens, the new rules have rendered them silent. Social media accounts and WhatsApp groups are being erased, with many fearing that Beijing will use what they say online against them.

And this is exactly what Beijing wanted.

“The damage has already been done in terms of self-censorship,” one of the co-founders of GreatFire.org, an organization that tracks China’s online censorship, told VICE News, using the pseudonym Charlie Smith. “Beijing’s actions in Hong Kong have successfully created a climate of fear. You don’t need a billion-dollar censorship apparatus when nothing is being said.”

On Tuesday, TikTok, the Chinese video app that U.S. President Donald Trump is considering banning, said it would remove its apps from app stores later this week “in light of recent events.”

The impact of TikTok’s withdrawal, which has only a small presence in Hong Kong, will be limited, but it follows Facebook’s decision to temporarily pause processing government requests for user data, a move it announced Monday alongside other U.S. tech giants like Twitter, Google, and Microsoft.

Apple says it is “assessing” the situation, noting that it doesn’t get requests directly from the Hong Kong government.

The companies have made these decisions in the wake of the national security law that came into force late last Tuesday, just hours after it had first been made public.

In a 116-page document, the Chinese government laid out the ways in which it would erode Hong Kong’s free internet.

The new law gives police sweeping power and implementation rules revealed late on Monday night show that police can order social media platforms, publishers and internet service providers to remove content they decide is endangering national security or is likely to cause such an offense to occur.

They can also block entire platforms without any judicial oversight or approval.

The new rules also allow police to seize electronic devices without a warrant in “exceptional circumstances” — which have not been defined.

Any company that does not comply completely with these orders will face fines of up to HK$100,000 ($12,903). But more worrying for the tech companies like Facebook, Google, and Twitter, who all have offices in Hong Kong, employees could face jail terms of up to six months.

“The new implementation rules sound the death knell to the city’s virtual community,” Joshua Wong, a high-profile pro-democracy activist, and student leader told VICE News over email. “Platforms, publishers, and internet service providers would be ordered to take down any messages that are accused of endangering national security. With fines and prison sentences, this new rule is effectively paving ways for stricter cyber controls.”

China has spent decades and billions of dollars building up its complex and highly advanced censorship apparatus known as the Great Firewall, which keeps citizens in the dark about controversial topics like the Tiananmen Square massacre.

For now in Hong Kong, the police are the ones who will oversee the new censorship rules, and they won’t have the resources to track every comment posted on social media, or the advanced automated systems in place in mainland China to monitor every single user.

But, because there’s no way of knowing who is being tracked or what content will be punished, individuals will stop posting anything that could be deemed critical of the government in Beijing.

“People are becoming more cautious and vigilant about online expression. Most of the WhatsApp groups I’m in have switched to Signal, and that’s exactly how the CCP wants the system to work,” Kong Tsung Gan, an activist living in the city, told VICE News. “The way the CCP works is that, since its rule is by definition arbitrary and it can do whatever it wants, it creates uncertainty among its subjects, and many choose to err on the side of caution. That’s what the CCP’s brought to Hong Kong with the national security law.”

Cover: Demonstrators in Hong Kong hold placards and a banner while chanting slogans demanding the end of one party rule in China on July 2, 2020. (Photo by Geovien So / SOPA Images/Sipa USA) 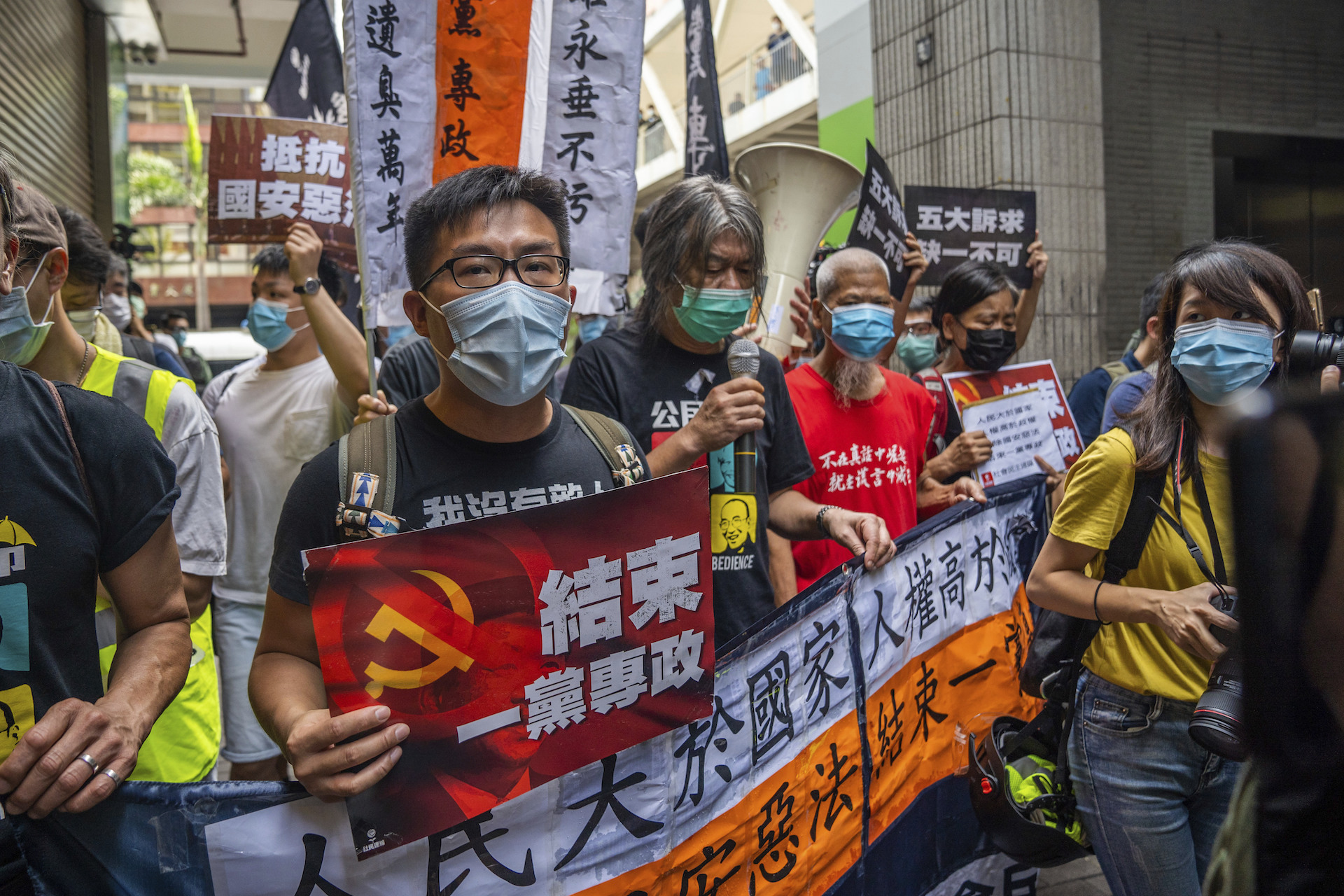 The Democrats Have a Big Decision to Make About Mike Bloomberg

Protests Against Police Brutality and Trump’s Secret Police Are Exploding Across the U.S.