Aston Martin finds itself in a bit of a predicament. While a corporate shake-up has finally laid rest to the rumor mills, Aston Martin, as a car-maker, stands at the brink of either a potential turn-around or a financially disastrous situation.

But then Aston Martin never had an amicable relationship with its balance sheet, especially with its much talked about IPO backfiring and not to mention mounting costs plus a sales pressure stemming from the current economic climate.

However, as a car-maker, we think Aston is on the right track, especially with the strong foundation laid by its former CEO, Dr. Andy Palmer. To understand the Aston Martin of today, you need to look at its past. A string of owners, a financial history as tumultuous as the number of times Daniel Craig rolled his DBS in Casino Royale plus an aging product line, did not do itself any favors. Then Andy Palmer came in and put in a firm hand on the proceedings with a clear road-map, including new products and a new plant. 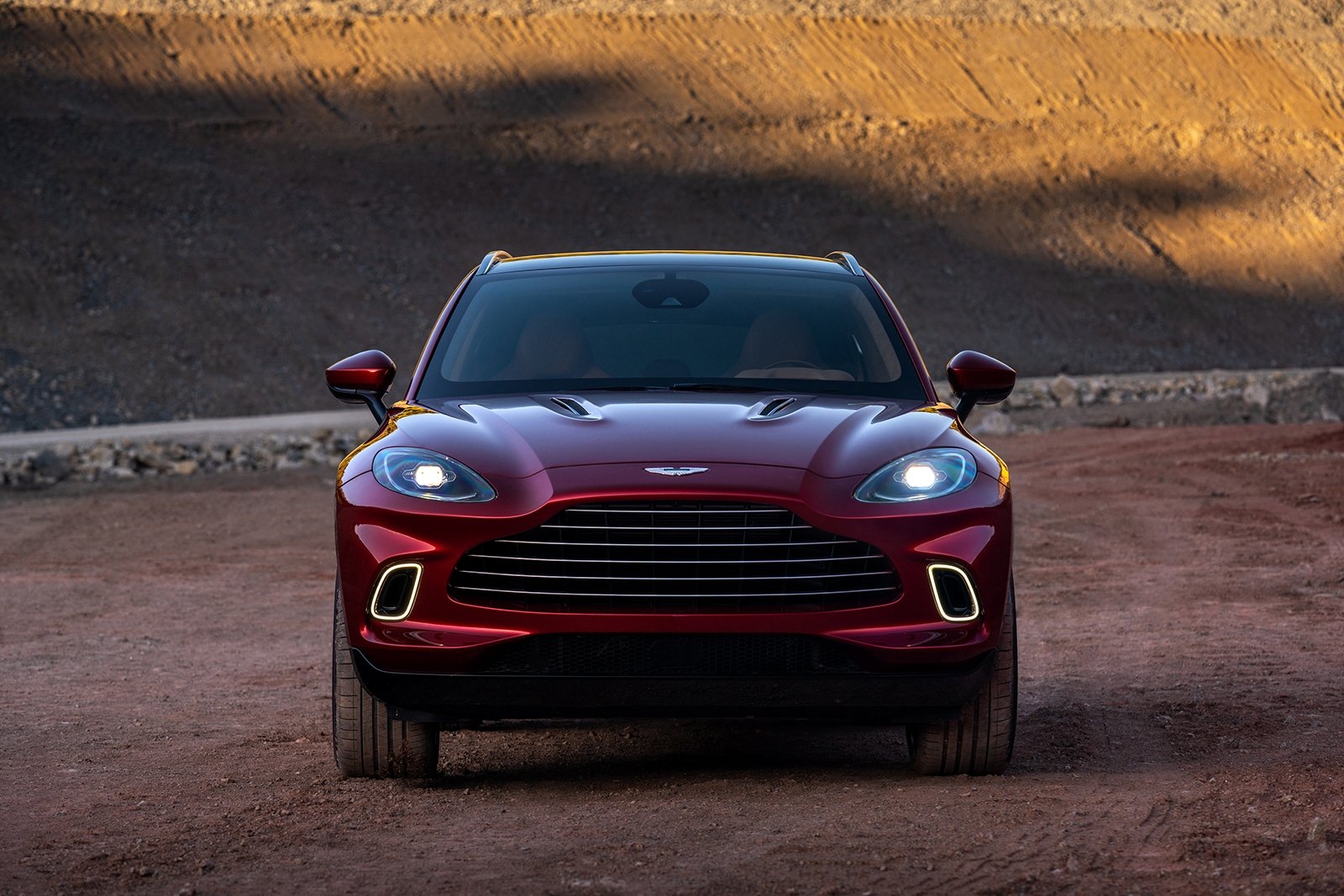 We have already seen the DB11 and the V8 Vantage, but the string of racy concepts shown at last year’s Geneva show set the tongues wagging. The mad Valkyrie, Vanquish plus the Valhalla showcase the route Aston is taking: F1 tech infused with spaceship styling.

However, while mid-engined supercars will open up a new chapter for Aston, the onus lies on an SUV to pay the bills and keep the coffers filled. It’s no secret: SUVs are a sure-shot way of generating revenue plus not to mention unlocking new markets where sports-cars are shunned, but high-end luxury cars are in demand.

Porsche, Bentley, and Lamborghini have all prospered going via this route; thus, it was only logical that Aston Martin also jumps into the fray. However, the question is, does the DBX come a little too late to the party, and can it single-handedly save Aston Martin? Well, let’s dig deeper.

First and foremost, you cannot accuse Aston of sitting idle all these years as underneath the rather pretty exterior; there is a new aluminum platform, a raft of new technology plus a sophisticated 4WD system.

It also might seem a bit odd that in the age of political correctness, the DBX only gets a thumping twin-turbo V8 with 542 horses and not some form of electrification but with a 0-62 mp/h time of 4.5 seconds, it is pretty quick.

In terms of positioning, it is somewhere between the bonkers fast Urus and the stately Bentayga. With a suite of technology onboard like standard air suspension, a 48-volt electronic anti-roll system, driving plus off-road modes (in an Aston!), and an electronically controlled active center transfer case, the DBX can not only claim to be a proper Aston Martin but also a bonafide luxury SUV.

So either you can lift the DBX and wade through water up to 500mm or hit the Sport+ button and lower it for the proper grand tourer experience. Now whether any owner will ever test its water wading capabilities or even go near the hill-descent button is something to be questioned about; the main thing is that if they wanted to, the DBX would do it. Thus while the only ‘off-roading’ the DBX will ever do is probably climbing the curb outside a casino in Monaco or at Harrods, London, it is indeed impressive that Aston has gone the extra distance to make sure it’s not some garage showcase. 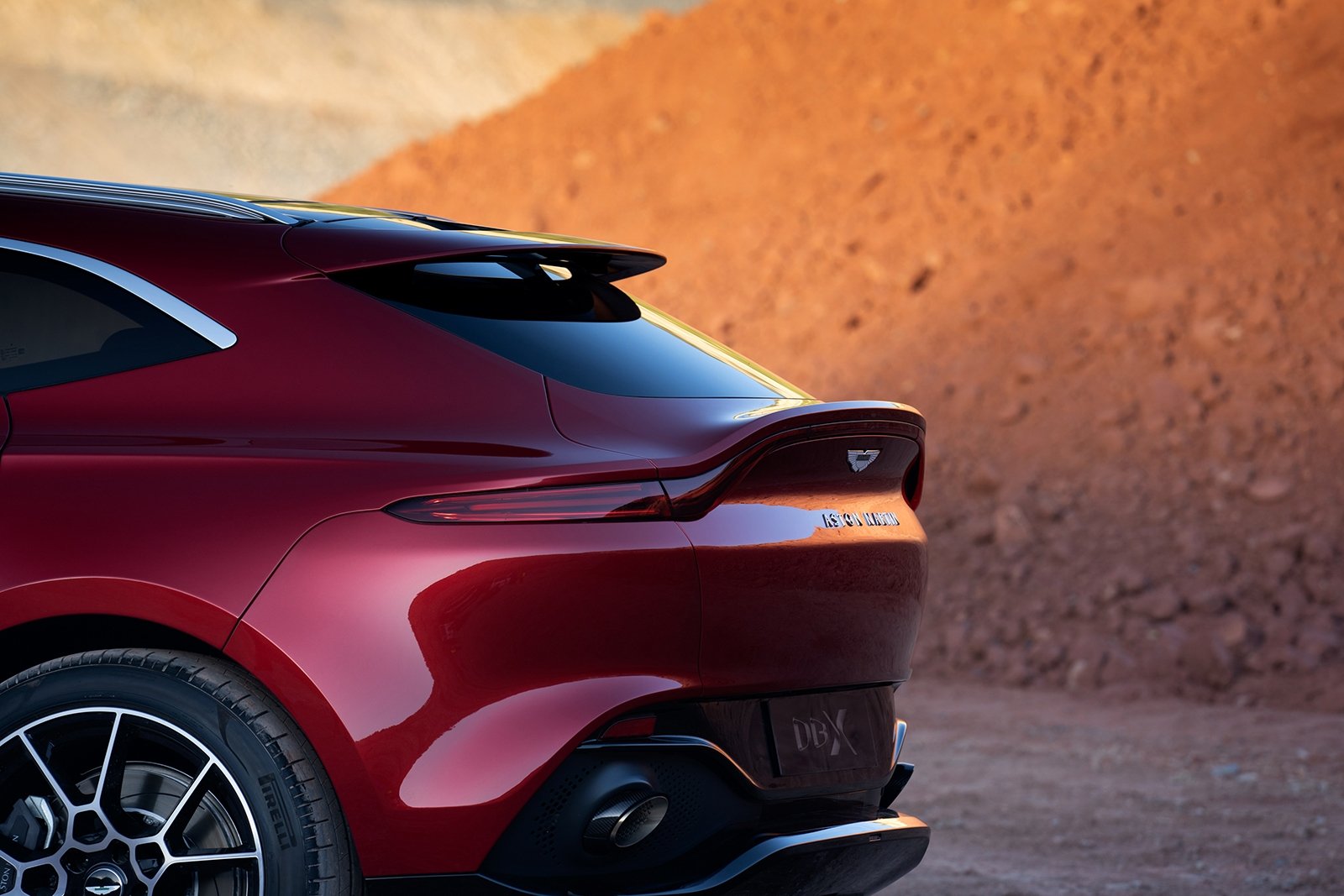 So yes, the DBX has got all the right SUV credentials, but is it a proper Aston Martin? Does it look beautiful? Does the interior make you feel special like every other car they make? The answer is a resounding yes and then some.

A beautiful SUV is a bit of an oxymoron, but Aston has somehow managed it. It isn’t grotesque and reveling in its enormous proportions like some others of its ilk in this sector as instead, it is svelte and delicate in its detailing as any 2,245 kg SUV can be.

There is a lot of sculpting going on here and a lot of small details which work together harmoniously. In the flesh, the DBX is massive but hides its bulk admirably with an avalanche of gorgeous design flourishes. The grille is perhaps the biggest that Aston has made but sits well, and the front has a tone of authority but not overly so. 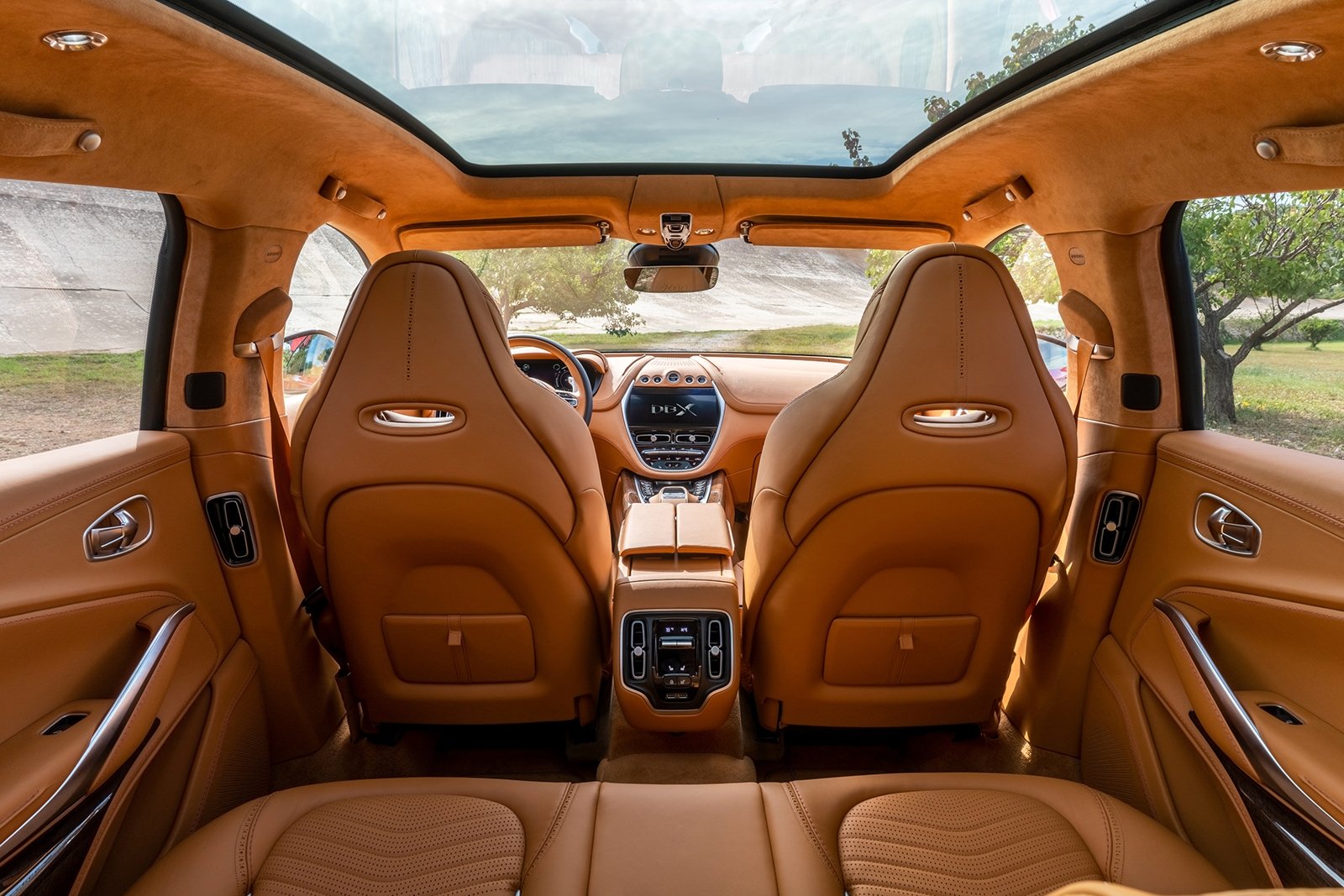 We love the headlamps, and it lends the car a stance that is nigh on perfect. Move to the side, and here the sloping roofline along with the high waistline further drives home its aspirations of being about the ‘S’ in the word SUV. However, it is the rear styling that mimics the V8 Vantage with its voluptuous haunches is what makes it the prettiest SUV out there. No mean feat that!

Move closer, and you will see that the B-pillar is all glass so as not to ‘interrupt’ the lines on the car plus even the door seals are hidden. There are 22-inch wheels as standard, and that’s good because any lower and it would look ungainly.

The car lowers itself with its air suspension for you to get in, and once inside, it is as beautiful as it is on the outside. Fragrant leather and a mix of the most indulgent materials greet you, plus you will notice how nicely the seats cocoon you. It feels more like a sports-car inside rather than a high riding SUV. You do not sit too tall or too low, plus there is enough glass area for the cabin to feel sufficiently spacious. Despite the sloping roof and the high waistline running across, the DBX does not feel cramped at the rear, plus there are enough toys for you to play with. 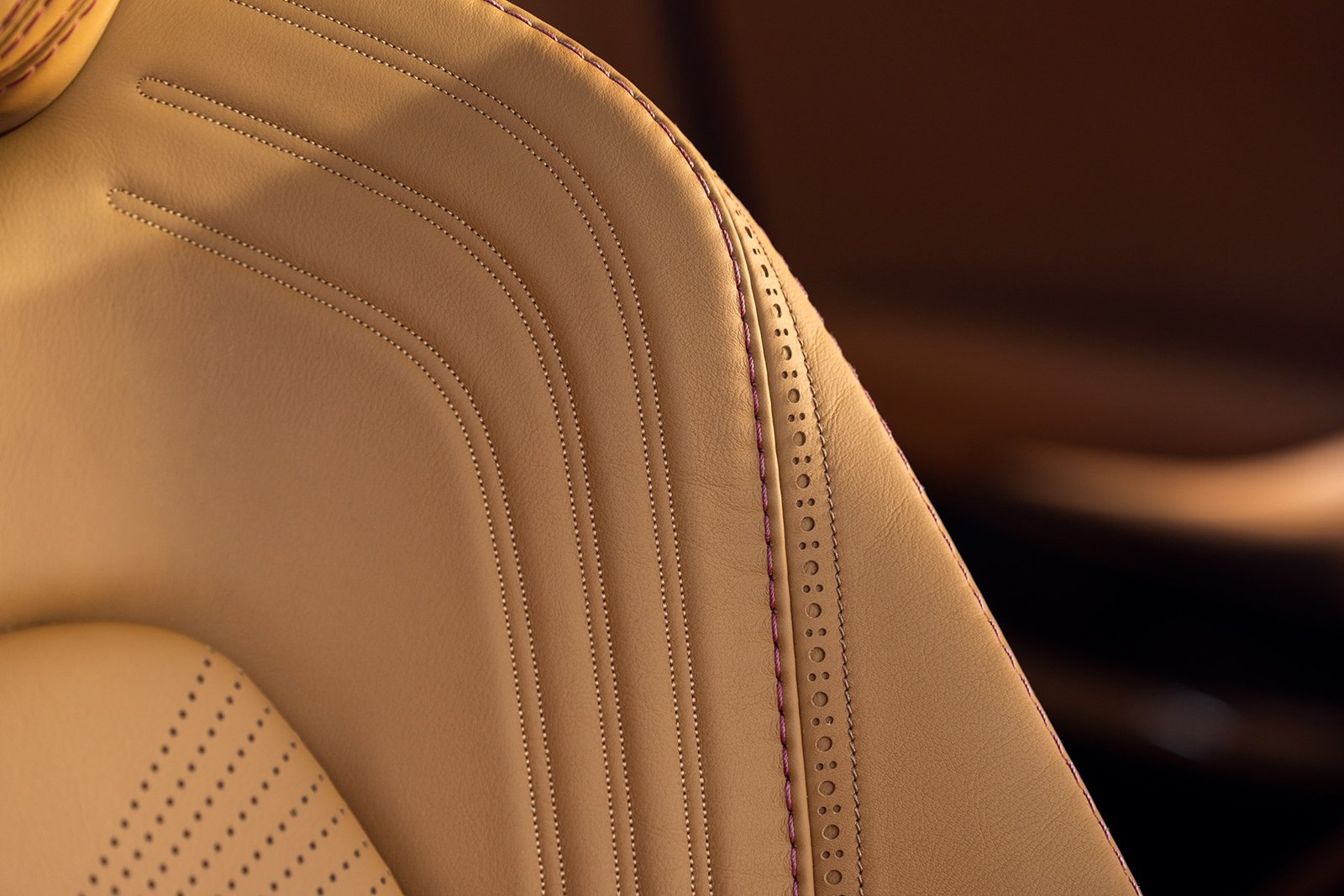 Up-there at the front, the driver gets a cosseting interior while the floating center console sits perfectly with the cabin architecture. It is very minimalistic, with little attention to detail lavished here. The speaker grille is also finished in leather while it is the first car to have a full Alcantara roller blind for the glass roof. A pair of massive TFT displays sits flush in the cabin, and as you would expect, the DBX has pretty much everything you want from your luxury SUV and then some.

Deliveries should start from later this year, and the already swelling order books mean that the new factory would be kept busy well until next year too! Thus it seems the DBX can very well rescue Aston Martin and give it the canvas on which the car-maker can paint its ambitious plans. However, more importantly, the DBX seems like a proper Aston and not a miss judged cash grab opportunity at the SUV sector. Armchair pundits, self-appointed guardians, and the world can all rest easy- the DBX is an absolute cracker of a car.

Conservatives Are Flipping Out Over Nancy Pelosi’s Pens

With humans vulnerable: How about a digital helper?