Breguet is one of the oldest names in the world of horology and luxury watchmaking. While keeping the aesthetics intact, the founder Abraham-Louis Breguet has had a keen interest in the chronometry of the timepieces since the inception of the brand in 1775. He determined the essentials in the art of fashioning timepieces were reliable and legible. His designs were uncluttered, sophisticated, and easy to read that created a benchmark in Haute Horology. With time his expertise to create impeccable timepieces, King Louis XVIII of France appointed the founder as the official chronometer-maker to the French Royal Navy in 1815 when the king noticed that his designs, including tourbillons, optimized chronometry, and its applications.

House of Breguet thus embarked on its longstanding relationship with the waves and blues of the oceans. The company has embraced the classic blue as its color and has been incorporated in every way possible. Considered to be the father of modern clock and watchmaking, Abraham-Louis Breguet was also a member of the Bureau des Longitudes in Paris, the most prestigious title a French horologist could aspire.

For more than two centuries, the House of Breguet has stood as an example of dexterity, precision, and craftsmanship. In 1840, a Breguet model was the first timepiece to reach the Antarctic, guiding the Jules Dumont d’Urville expedition, thus further strengthening the ties with the maritime world. Commemorating A.L. Breguet’s interest in the oceans, the first marine collection by Breguet was launched in 1990. A collection that included a selection of chronographs that brought together the rhythm of the ocean swell and the light currents of the trade winds: a combination of a timeless aesthetic and technical performance in Breguet’s time-honored tradition.

Over two decades later, this high-end to the daily-casual marine collection has been successful is staying relevant and has been ever-evolving with additions of tourbillons, GMT, equation of time, and so on. In 2005, The Marine Collection also took a sportier aesthetic with bold and contemporary designs. The company has always pushed itself to the limits creating watches that are practical as well as ornamental.

The house of Breguet has had significant competition in creating marine-based timepieces with Patek Philippe Nautilus, Vacheron Constantin Overseas, and Audemars Piguet Royal Oak and more as competitors. For 2020, the Swiss luxury watchmaking brand has introduced a collection of high-jewelry Marine Poseidonia watches for women. With an exquisite interpretation of the fascinating beauty of the seas, the watches are genuinely an exemplary specimen of the brand’s legacy. 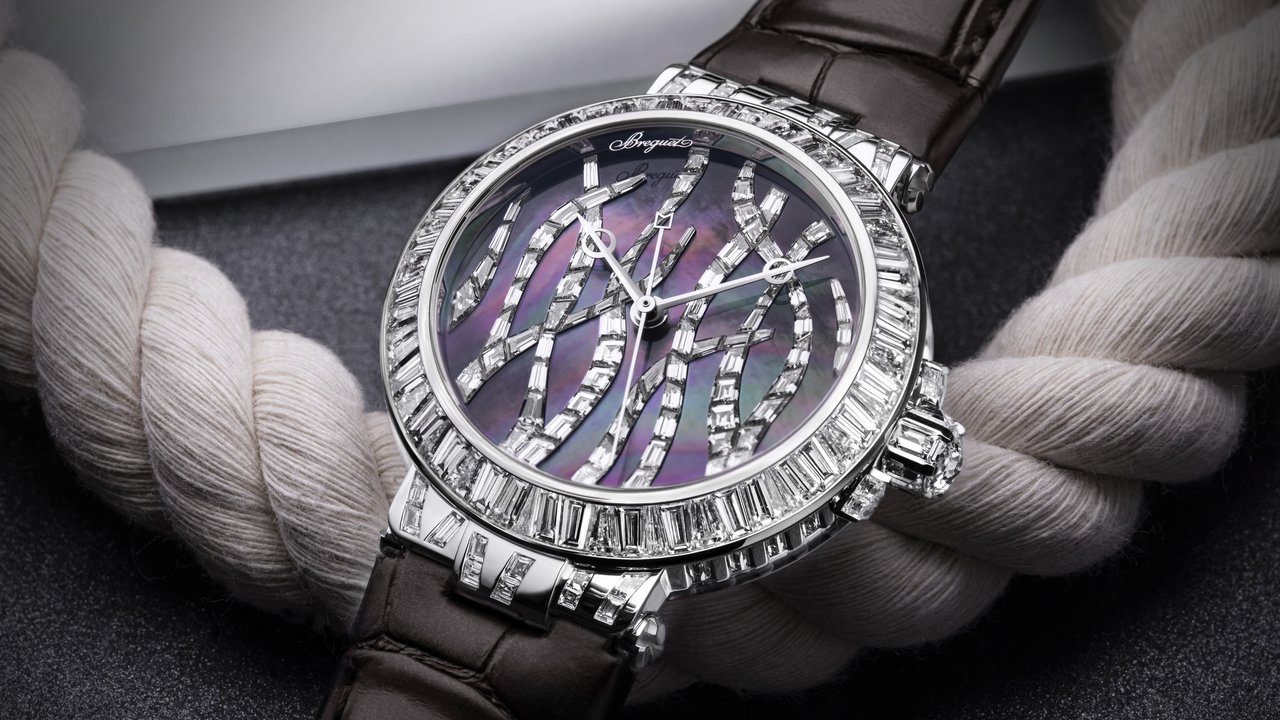 Like every other collection, the brand creates a beautiful canvas of the seas giving the true glimpse of its glory and grandeur. The Posidonia oceanica – an aquatic plant essential to the sea’s balance is recreated on the face of the watch blending in with the watch to perfection with a stunning art of mother-of-pearl marquetry and invisible gem-setting. The Marine Haute Joaillerie Poseidonia’s dial is encrusted with 85 baguette-cut diamonds (2.56 carats), appearing to ripple across the intense iridescence of the Tahitian mother-of-pearl. The brand has crafted four versions of the timepiece, each in a vibrant rainbow of gemstones or pristine diamonds. The artisan selects each mother-of-pearl attentively to harmonize its iridescent pattern, unique to each gem, with the inset curves of the Poseidonia. Accenting with the artwork, the bezel, case band, lugs of the strap, and the clasp of the buckle are embedded with gemstones.

Mother of Pearls and Diamonds

In the case of the 18k white gold and diamond watch, the timepiece harbors 123 baguette-cut diamonds or gemstones weighing another 7.13 carats. Another exquisite detail is the single briolette-cut diamond graces the crown, and six baguette-cut diamonds. Together, their radiance evokes rays of sunshine playing on the sea’s surface. The crown protection, as well, is set with 14 baguette-cut diamonds. The tip of the second-hand forms a “B,” which stands for the “Bravo” of maritime parlance, or Breguet. The traditional baguette-set bezel facilitates reading: the distinct triangular diamonds mark each of the 12 hours.

The brand is known for its mastery in complication, and they have given the women collection the same brave heart of the extra-thin, self-winding 591C caliber. The white-gold rotor features a ship’s wheel design and a sparkling diamond border contrasting with the intensity of the Tahitian mother-of-pearl. With a 52-hour power reserve, the bevel of the white-gold rotor of the Marine Haute Joaillerie Poseidonia, the words Horloger de la Marine (Watchmaker to the Navy) is engraved on the rim in white gold referring to the titled bestowed upon A.L. Breguet in 1815. The diamond and emerald versions retail for $276,400, and the ruby and sapphire watches come in at $256,000.

Through Breguet’s extensive artisanship and expertise, the Marine Haute Joaillerie Poseidonia is an exquisite reflection of the fascinating natural beauty of the oceans.