When Mark Herring became the attorney general of Virginia, he’d already heard that the state had a sprawling collection of untested evidence from sexual assaults. He didn’t quite realize, however, just how big that backlog was: In total, Virginia had 2,665 rape kits that had never been tested.

“I was shocked. That’s unacceptable,” said Herring, who took office in 2014. “One untested kit is unacceptable. And I knew that behind every kit is a story of someone who was dealing with unimaginable trauma. I couldn’t imagine not only going through that trauma, but the knowledge that you went through the hours and painful examination — and your kit was never tested.”

So Herring pledged to change that. Last week, he kept his promise, when he announced that Virginia had tested every kit in its backlog, after spending five years and $3.4 million on the project. One man has already been charged thanks to evidence found in a 2012 rape kit.

Virginia is just the seventh state in the United States to eliminate its rape kit backlog. Testing these kits and investigating the evidence inside them takes time, money, and manpower, but advocates say that the nationwide backlog can be eradicated — as long as jurisdictions commit. The very existence of the rape kit backlog, its ubiquity and size, is proof of a societal failure to grasp the complexity and devastation of sexual violence.

“It is just that one really tangible symptom of this larger total dysfunction of how we treat sexual assault,” said Ilse Knecht, director of policy and advocacy for the Joyful Heart Foundation, a Mariska Hargitay-founded organization that’s leading the charge on eradicating the nationwide rape kit backlog. “How our society and law enforcement treats sexual assault and sexual assault survivors.”

In Herring’s view, officials who don’t make it a priority to eliminate their backlogs have no excuse, especially because federal grants are available for jurisdictions that want to do it.

“It needs to be a priority in every community and every state,” he said. “Don’t continue to push the problem down the road. Test the kits. Do the work. It will make the community, it will make the state, a safer place. It could help solve crimes. It could even be the key link in a future crime.”

“I knew that behind every kit is a story of someone who was dealing with unimaginable trauma.”

After someone is sexually assaulted, they can choose to undergo a forensic exam at a hospital to collect DNA evidence. That evidence is then preserved in what’s colloquially known as a “rape kit” and sent to a lab for analysis. There, experts can try to develop a DNA profile of the assailant and send that profile to the FBI’s national database.

That’s the ideal scenario, anyway. But for decades, law enforcement agencies across the country often did not test their rape kits. Instead, these kits, and any clues they might contain about sexual predators, ended up tucked away and forgotten in evidence lockers. Even kits that were sent out for analysis frequently languished in overworked and under-resourced labs.

If a state wants to put an end to its rape kit backlog, it has to first admit that it has a backlog to begin with. At least 40 states have embarked on some kind of effort to inventory their untested rape kits at least once, according to End the Backlog, an initiative by the Joyful Heart Foundation.

“One of the most, I think, challenging pieces of this work is getting the real numbers,” Knecht said. “There’s a lot of reluctance to do that for law enforcement to come forward and say, ‘OK, we have 1,000 kits,’ because now the culture is such that they know that that’s a problem and there’s no excuse for it.’”

Still, it’s unclear just how many untested rape kits remain in the United States. End the Backlog has uncovered almost 40,000 untested kits scattered across 41 jurisdictions. The National Sexual Assault Kit Initiative (SAKI), a federal grant program that aims to help jurisdictions reform their approach to rape kits, has found even more: over 110,000 untested kits in 40 states. As of 2019, nearly 55,000 of those kits have been analyzed thanks to the initiative.

Virginia is not one of those states. Instead, it received a $1.4 million grant in 2015 as part of an initiative led by New York’s Manhattan District Attorney Cyrus Vance. That grant was later supplemented by another $2 million from the Sexual Assault Kit Initiative.

Angela Williamson, who has led the Sexual Assault Kit Initiative since its creation under the Obama administration, said rape kit reform isn’t just a question of political will, because many jurisdictions simply don’t have the money to tackle this issue. In the five years since the initiative’s inception, it has doled out about $160 million in grants to 64 jurisdictions in 40 states. It’s on track to hand out another $40 million this year.

“Getting buy-in is still often hard from people higher up, because obviously this is a huge commitment,” she said. About 30 to 35 jurisdictions apply for funding each year, and around 90% end up getting funded. “It’s getting people to recognize this is a problem, that we’re here to help, but committing a team of people to do the work. And again even though we fund these people, these are experienced people who will be taken off other casework to do this work.”

A lack of communication and bureaucratic breakdowns can also complicate rape kit reform. In Jefferson County, Alabama, Aryn Gieger-Sedgwick started visiting local police departments’ evidence rooms to count the untested rape kits by hand after the district attorney’s office secured a Sexual Assault Kit Initiative grant in 2016. Some of the kits were black with dust; her team had to don masks and gloves. They found 3,876 untested rape kits from as far back as 1985.

But the district attorney who spearheaded the effort to apply for a federal grant to fix the backlog was soon voted out of office. In the space of two years, the county went through six district attorneys.

“Every new person who came in had a different idea of how to move forward,” said Gieger-Sedgwick, who runs the Sexual Assault Kit Initiative grant for the DA’s office. “We had to get them briefed on it. It’s one project in the midst of an entire DA’s office.”

The inventory of the kits was, she said, “eye-opening” for local police, who vowed to start sending all their rape kits in for testing. But 27 law enforcement agencies operate in Jefferson County. Convincing all those organizations to work together, consistently, is next to impossible.

“I cannot tell you how difficult it is to get 27 chiefs of police — or even 27 representatives — in the same room, because of scheduling, because of priorities, because of any number of things,” Gieger-Sedgiwck said. “It requires leadership and it requires the political will for somebody to say, ‘This is important, this is something we have to take seriously.’”

Alabama has no statewide effort to reform its rape kit backlog, according to End the Backlog.

While some jurisdictions test their rape kits at publicly run labs, those labs must also handle the daily influx of all kinds of criminal cases. For years, Jefferson County could only send 25 kits a year to Alabama’s lone public lab, because it simply didn’t have the capacity to test more.

In Idaho, in 2019, it took the state crime lab an average of 154 days to test a kit. In February 2020, the head of the Georgia Bureau of Investigation warned legislators that the state’s backlog of rape kits — proclaimed eliminated in late 2018 — had swelled to nearly 800, and could grow even larger if Gov. Brian Kemp’s budget cuts went into effect.

“You can test all the kits you want, but if you don’t give them the equipment and the space to keep up, then there’s always gonna be a backlog,” said Debbie Smith, the namesake of the federal Debbie Smith Act, which offers grants to increase jurisdictions’ ability to conduct DNA testing on rape kits. Smith was abducted and raped in Virginia in 1989, but her attacker was not identified for more than six years, when the forensic evidence from the crime was entered into the FBI’s national database.

FILE – July 6, 2017, file photo shows a forensic scientist looking through a microscope at the state crime lab, in Taylorsville, Utah. The backlog of untested rape kits is growing even after state lawmakers passed a law in 2017 to address the issue, in part because the legislature didn’t provide enough money to hire the necessary technicians for the state crime lab, KUTV reports. (AP Photo/Rick Bowmer, File)

Virginia relied on private labs to conduct its testing, like 90% of Sexual Assault Kit Initiative grantees, according to Williamson. Private labs can often process the kits faster, because they’re able to handle large batches of kits at once. Still, it took five years to process Virginia’s 2,665 kits.

That may sound like a long time. But if a jurisdiction rushes through its testing, it risks overwhelming police with cold cases to investigate, according to Williamson.

“If you just cleared all the testing in six months, you’re just creating another backlog,” she said. “There’s no way to speed through, again, decades’ worth of work in a matter of months. It’s not realistic.”

Through Virginia’s testing, more than 850 DNA profiles have been uploaded onto the FBI’s DNA database; that process has yielded more than 350 “hits” for Virginia law enforcement to investigate. Police have charged Dyron Williams for “carnal knowledge of child between 13 and 15 years of age” after the testing of a 2012 rape kit, and Herring anticipates that the testing will soon lead to more charges.

Virginia has also taken steps to try to keep its backlog from ever coming back. It’s created its first statewide electronic system to track rape kits, which agencies must update with the location and status of each kit. Survivors can then check that system. A 2016 Virginia law also mandates that law enforcement send rape kits to the Virginia Department of Forensic Science within 60 days of receiving them, but that’s far too long for End the Backlog, which advises jurisdictions to to send rape kits for testing within 10 days.

There’s another loophole: If police never pick up rape kits from hospitals, they may simply stay there indefinitely. Instead, Knecht, from the Joyful Heart Foundation, suggests that rape kits be sent straight to labs for testing, without that added stop in law enforcement custody.

Despite the slow pace of progress, many states are moving forward: In late 2019, End the Backlog commended Connecticut, Oregon, and Utah for enacting comprehensive rape kit reform.

When Smith first started speaking out about sexual assault, rape was “a whispered crime, an under-the-table conversation,” she said. When she tried to talk about the need for reform, the room would go silent; nobody would talk about it.

But last week, Smith spoke openly about her experiences at the press conference announcing the end of Virginia’s backlog. At times, she held back tears.

“I know that it’s slow,” she told VICE News. “We live in a microwave age where we want everything done right now.”

But, Smith added, “It’s been worth the wait.” 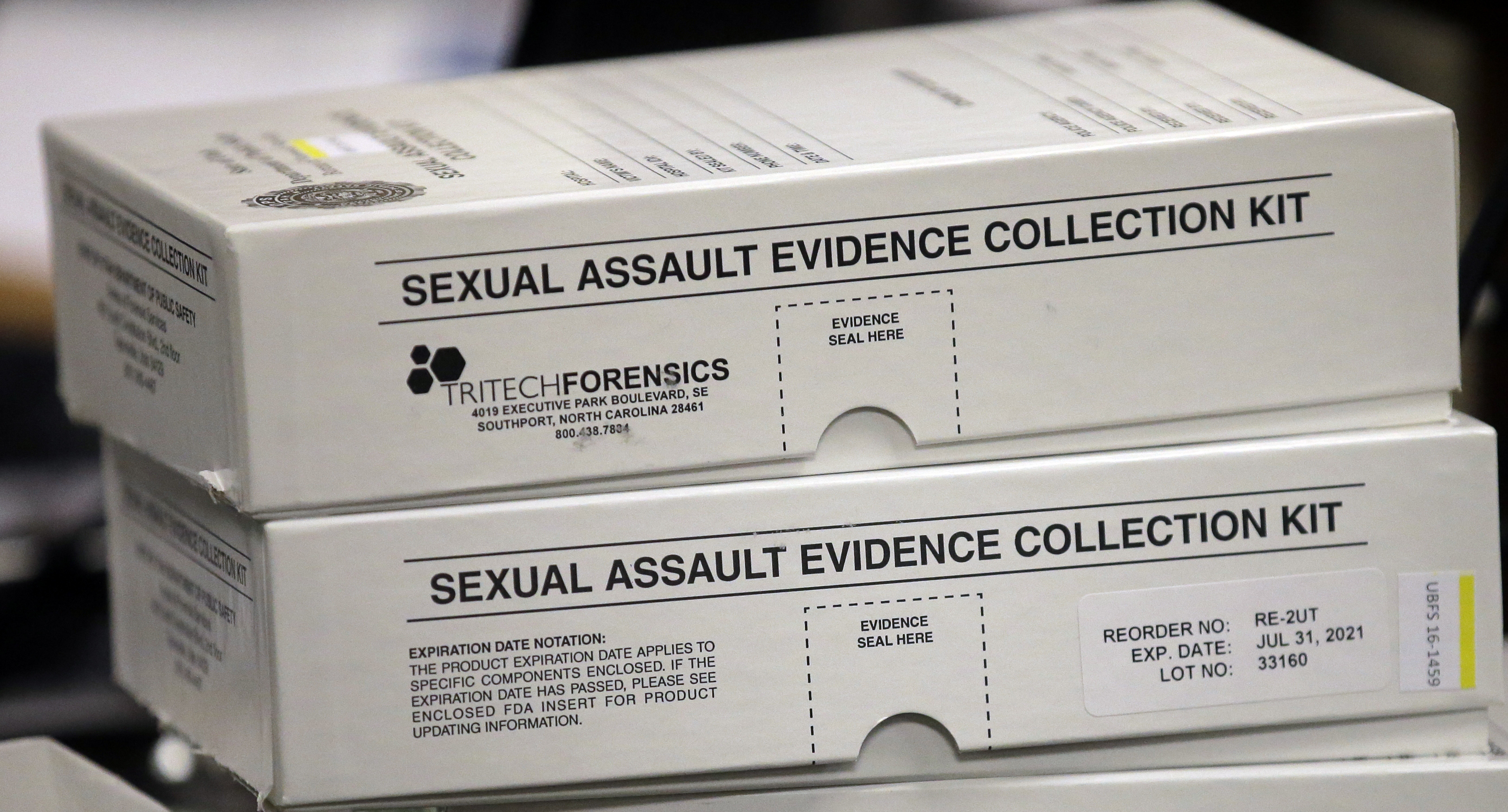 Coronavirus: ‘I missed out on furlough payments by a day’