A neo-Georgian building on the banks of the River Erne is the home of  Ireland’s oldest craft pottery, Belleek. For nearly 170 years, Belleek has been a collectors’ item and prized family heirlooms. 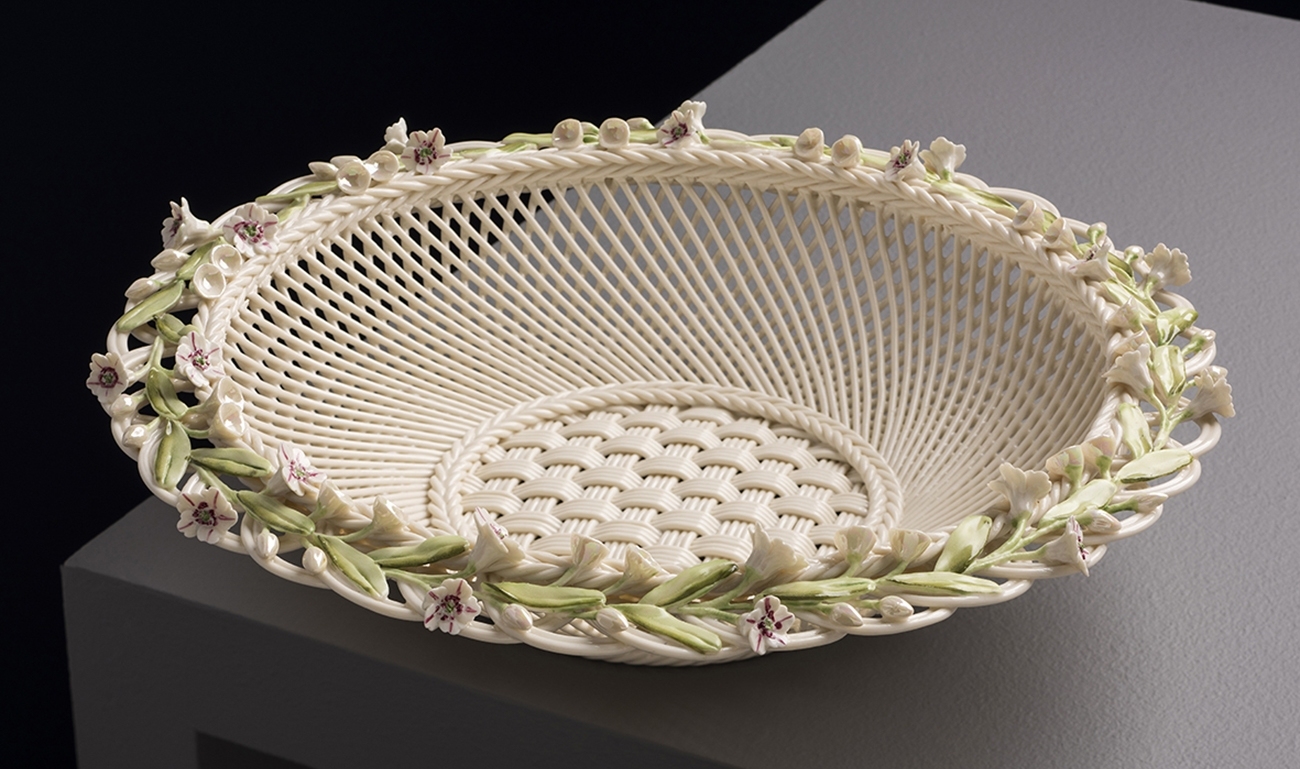 The modern range is called “Belleek Living,” with Claire in charge while Anthony Horrigan is responsible for Aynsley and Galway. Designer and artist, Clare Conway were born in Philadelphia in 1985, migrating to N.Ireland in 1998. She graduated from the University of Ulster with a BA in Fine and Applied Art in 2007.

Belleek Pottery Works Company Ltd began trading as a porcelain company in 1884. But pottery had been made in the area since 1849 when Bloomfield, an amateur mineralogist, having carried out a survey of his estate and discovered it was rich in feldspar, kaolin, flint, clay, and shale, went into business with Dublin merchant David McBirney and London architect Robert Williams Armstrong, originally from Co. Longford. Mainly to give employment to the Castle Caldwell estate’s tenants, desperate for work during the Irish potato famine. Bloomfield arranged for a railway line to be built to Belleek so that coal could be delivered to fire the pottery’s kilns. The company is now owned by Dundalk-based American, George A. Moore, and the company has acquired “Galway Crystal”  and “Aynsley China,” the English pottery firm going back to 1775. 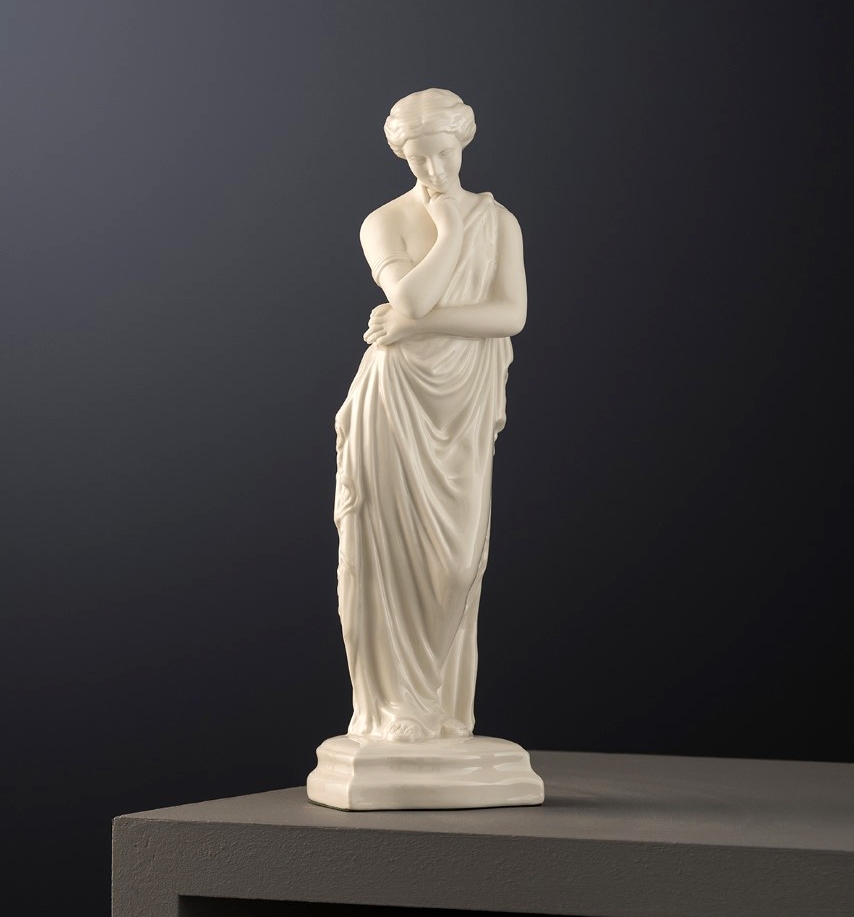 Fourteen craftsmen were brought to Northern Ireland from Stoke on Trent. At first, the pottery produced – pestles, mortars, washstands, hospital pans, floor tiles, telegraph insulators, and tableware.  Earthenware remained the superior product at Belleek until 1920 by which time, under master craftsman Frederick Slater, the company was selling worldwide. Belleek featured porcelain for the first time at the Dublin Exposition of 1872. Their display was the largest in the Irish and English industrial areas. Among the pieces listed in the catalog for the event were Parian china statues and busts, ice buckets, competes, and centerpieces. Tone Belleek piece won a gold medal at the L’Exposition de Paris Exhibition in 1900. 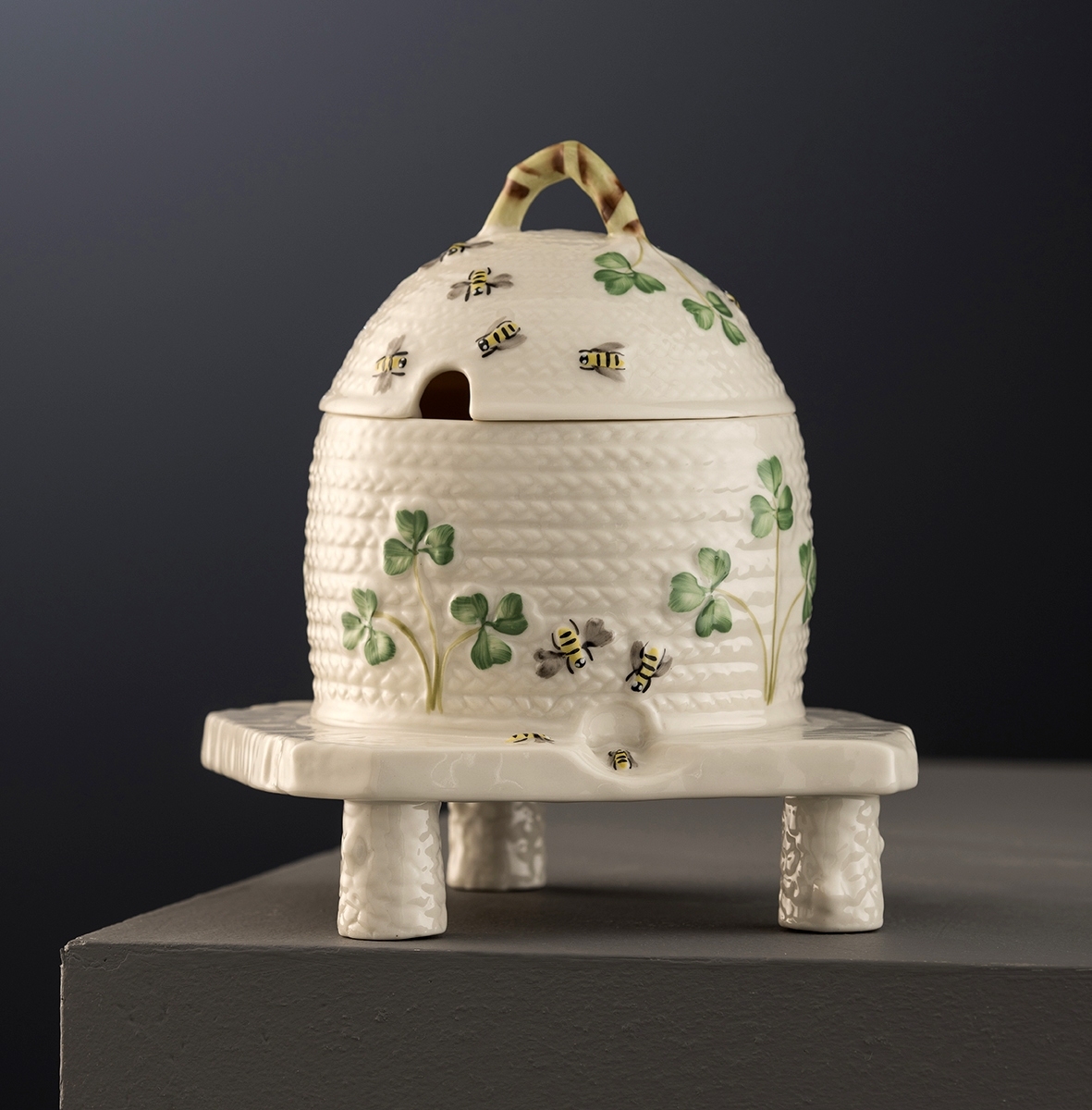 Belleek became famous for its pearly white Parian work.  This was a type of biscuit porcelain that looked like marble.  It was developed around 1845 by the Staffordshire pottery manufacturer, Minton’s and named after the Greek island of Paros, known for its marble, which could be prepared in liquid form and cast in a mold and mass-produced. It could also be hand-crafted. Parian is more vitrified than porcelain because it contains feldspar. It became known as “statuary porcelain.”

Antique Belleek can fetch from $500-$10,000. Those pieces bearing the brand’s oldest makers’ marks known among collectors as “Black Mark Belleek” are the most valuable. It is an arched ribbon banner with symbols of Ireland- shamrocks, an Irish wolfhound, a harp, and the Round Tower of County Fermanagh. The period 1891-1926 is the most coveted.

The Black Mark Third Period mark dated from the 1926 Wembley Exhibition and was used until 1946. It was updated to include the Celtic, “Deanta in Eirinn.”
(“Made in Ireland”) wrapped in a script around a circular cartouche featuring a Celtic knot.

Rail fares to rise 1.6% in January despite passenger slump

Trump Admitted He Deliberately Undersold COVID Risks: ‘I Always Wanted to Play It Down’

Premium Bonds: End is nigh for prizes on the doormat