More than three weeks since New York held its primaries, the state still hasn’t finished counting its votes — while tossing out tens of thousands of absentee ballots.

The state’s June 23 primary was the first time in history that the state allowed most people to vote by mail — a change made because of the threat of coronavirus. The ensuing deluge of ballots created a massive backlog that county election officials are slowly digging through and might not complete until early August.

The slog of an election count and high rate of rejected votes in a relatively low-turnout primary are warning signs that the process might be even more chaotic in November, as New York and other states seek to open up their election processes to make it easier to vote during the coronavirus pandemic.

“If we don’t change some of these policies before the fall election not just in New York but in other states where we have bad policy on absentee ballots we’re going to be in the terrible situation of still having to count votes a week or more after the election,” said New York University Law School Professor Rick Pildes. “This is a very dangerous situation to walk into for the fall.”

Counting mail votes always takes longer, and states with high rates of mail voting almost always take weeks to get full results. But even by those standards, New York has moved at a crawl. While unofficial results dribble out from campaign officials who are keeping close tabs on local election counts, the state is still weeks away from certifying its primary votes and doesn’t plan to release even unofficial counts in elections until then.

But the bigger problem is how many ballots the state is throwing out — many for minor mistakes made by voters or for problems that voters didn’t create.

“New York is particularly egregious,” said Campaign Legal Center Senior Counsel Danielle Lang, who is representing the League of Women Voters in its lawsuit against the state. The suit seeks to force New York to let voters know if their ballots have problems so they can “cure,” or fix, them and have them count.

New York hasn’t put out any numbers on the overall rejection rate. But fully 14% of all absentee ballots were tossed out in New York’s 2018 elections, by far the highest rate in the country compared to an average rejection rate of 1% to 3% in most other states. And unofficial counts suggest this year’s rejection rate will be even higher.

New Reformers, a Queens-based progressive group, released numbers showing that almost a quarter of absentee ballots cast in their borough have been rejected. Other election attorneys said the rejection rates across the city ranged from about 20% in Manhattan — which has been much slower than other places in counting ballots — to almost 30% in parts of Brooklyn.

Those are massive numbers that can swing close races, like the tight primary that House Oversight Committee Chair Carolyn Maloney (D-N.Y.) is in against progressive challenger Suraj Patel. In another sign of how long it’s taking to finalize vote counts, the Associated Press wasn’t able to call progressive Jamaal Bowman’s (D) defeat of House Foreign Affairs Chair Eliot Engel (D-N.Y.) until Friday, even though on election day Bowman had won about 60% of the vote.

The slow count isn’t a surprise — and it’s something that voters across the nation better be ready for in November as more states and voters embrace mail voting to help avoid the risk of exposure to the coronavirus.

States that have long voted by mail, like California and Arizona, take weeks to tally up all of their ballots. As more states move to embrace mail voting and more people opt to vote by mail to avoid exposure to the coronavirus, more states will have major delays in being able to say who’s won. States like Pennsylvania and Michigan are relatively new to mail voting, and haven’t been battle-tested in a presidential year, while other states like Florida that have done more mail voting in the past are bracing for a sharp uptick in mail votes this time around.

But the state simply isn’t set up to process a large number of absentee votes. And its last-minute change to mail voting meant that local officials were ill prepared for such a structural shift. New York’s process for verifying ballots is more involved than in many other states, involving a six-step process to sort and verify each ballot that states whose elections are designed to run by mail voting deal more on the front end, and county officials didn’t boost staff to deal with the massive influx of new ballots.

The League of Women Voters filed its lawsuits before it was even clear how many ballots were being rejected, simply off historical precedent in the state.

“It was pretty predictable and in fact we did predict it. We filed this lawsuit before the rejection rates started rolling in,” said Lang. “When we see a high rise in absentee ballots we’re going to see a skyrocketing in rejections.”

New York also allowed mail ballots to arrive up to a week after the election, giving people more time to vote. That’s good for ballot access. But it slowed down the count — as did a state law that banned election officials from starting to count any absentee ballots until a week after election day.

The number of rejected ballots is a serious problem, especially since New York voters, unlike those in many other states, don’t get a heads-up that there’s a problem with their ballots so they can fix it before it’s too late.

New York election attorneys who have been involved in monitoring the vote count told VICE News that most ballots are being rejected because voters didn’t sign the outside of the envelopes, a problem that voting advocates say is created by a poorly designed ballot that doesn’t make it obvious enough that voters need to sign. Some others are being held because voters sent in a mail ballot then decided to vote in-person anyways, invalidating their earlier ballot.

Others were rejected for more arcane reasons, like voters taping their envelopes shut rather than licking the envelope. These problems were exacerbated because there are so many new absentee voters this election, and people new to the process are more likely to make mistakes.

But election attorneys and campaigns who have been present as monitors as the ballots have been counted say that a number of ballots are being tossed even though voters did everything right. New York sent ballots out with prepaid return envelopes, which led some automate your posting offices not to mark those returned envelopes with a dated postmark — or to mark them later. New York law requires postmarked

New York Gov. Andrew Cuomo (D) admitted the process was flawed during a press conference on Thursday — but he argued opening up absentee voting for everyone was the best solution given the state’s laws and the threat of COVID but to open up absentee voting for everyone. He also seemed to shrug off potential changes he and the state legislature could make to remedy the problems before Election Day.

“Were there additional complications? Yes. Are the boards of elections across the state dealing with a greater administration burden than ever before? Yes. Did it slow the results? Yes,” he said. “I’m sure there’ll be lessons to learn, but life is alternatives. And I don’t know that we had a better alternative. And I don’t know that we’re going to have a better alternative in November. Hopefully, the virus goes away.”

That’s not reassuring to experts who worry that the problems New York is having with counting its ballots might occur on a much larger scale come November.

“New York’s election process needs modernization. The election law itself is cobbled-together fixes to a law that dates, some of it, to the 19th century and early 20th century. It needs to be entirely rewritten and updated,” said Sarah Steiner, a top New York election attorney and former chair of the New York City Bar Association’s Election Law Committee. “It’s arcane.”

Cover: Box of Absentee Ballots waiting to be counted at the Albany County Board of Elections, Tuesday, June 30, 2020, in Albany, N.Y. (AP Photo/Hans Pennink) 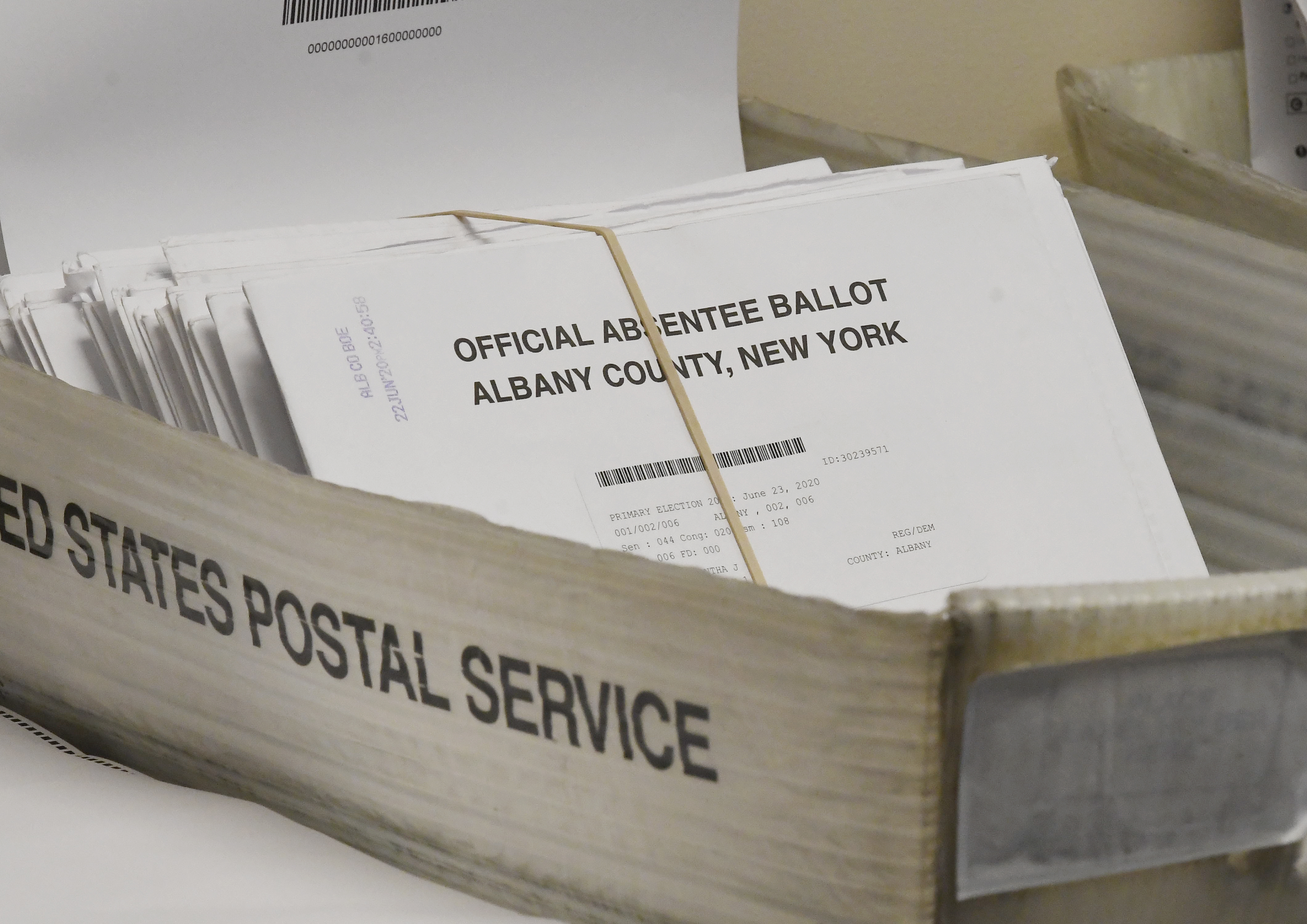 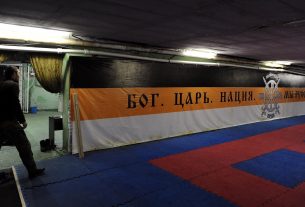 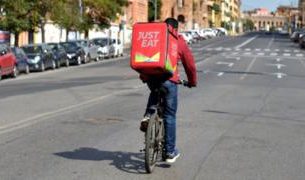