You must follow the reigning Queen when it rains. Queen Elizabeth 11 always shelters under Fulton’s birdcage. She doesn’t use anything else.

Fulton’s Umbrellas was founded in 1956 in London by Polish engineer and inventor Arnold Fulton, a survivor of the Warsaw Ghetto, whose sister and brother-in-law owned an umbrella factory in  Stockholm. He invented the ladies’ birdcage umbrella. 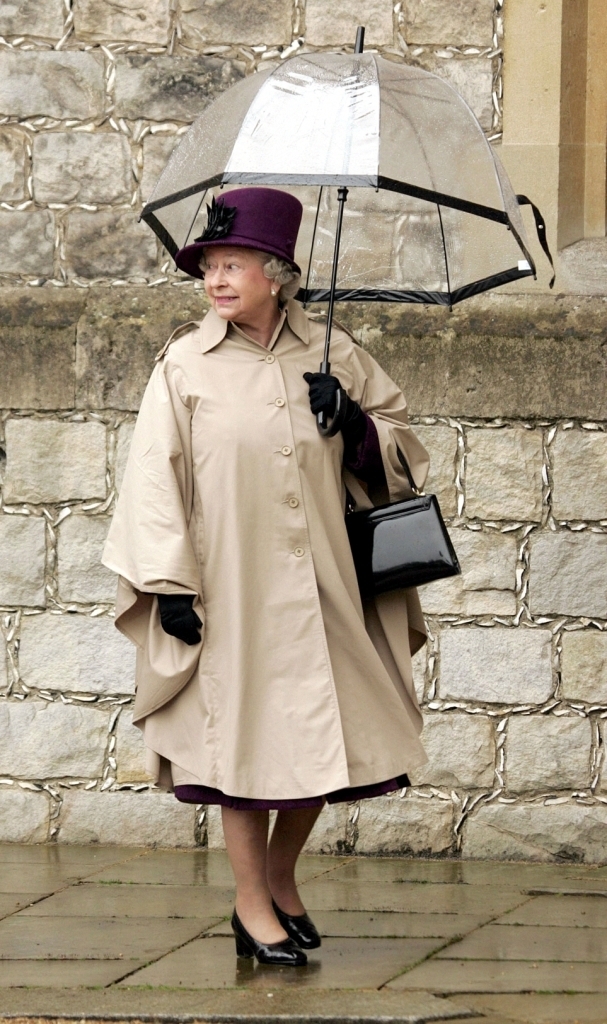 The Queen watches a parade of Aston Martin cars at Windsor Castle, on St.George’s Day, lead by Sgt Paul Allison dressed as ‘St. George’ on a White Charger named Osaka.

Fulton holds a Royal Warrant to Her Majesty the Queen and previously supplied them to Her Majesty, the Queen Mother, who first saw Fulton’s now-iconic Birdcage umbrella and thought that its unique domed PVC cover would offer the best protection while still allowing her to remain as visible as possible.  With a leather handle, a metal-tipped leather ferrule, and luxury pink foulard woven fabric, UV rated to UPF50+, Fulton’s chic $150 “Princess” ladies’ has a 102cm canopy span, with fiberglass ribs for lightweight strength. It comes with an elegant matching fabric storage case with leather details.

Fashion necessities like sans, bumbershoots, skiadeions, and gamps go back a long way.  Long before the word umbrella evolved from the Latin “umbrella” (rounded flower) and “umbra,” meaning shadow. As well before it became an essential part of papal regalia and considerably long before the French began calling their umbrellas “parapluies.” 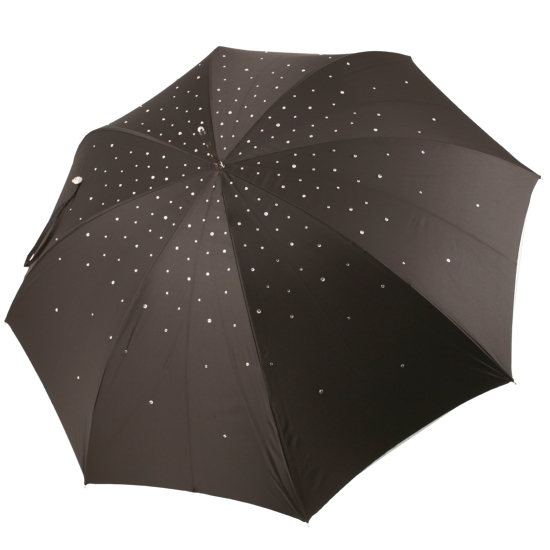 Sun parasols of all kinds are seen in ancient Persian sculptures and bas reliefs.  But it wasn’t until the eighteenth century that rainwear became a business and umbrella wear an industry. And tanning became trendy. The first lightweight folding brolly was introduced in 1710 by a Parisian merchant, Jean Marius, and a French scientist, Navarre, was the first to combine an umbrella with a cane. Pressing a small button on the side of the cane opened the umbrella. Umbrellas were rented. By the end of the century, there were many umbrella-making companies in France, including Boutique Bétaille ( 1880-1939) and  Maison Piganiol (1884) based in Aurillac in the Auvergne.

Other old and well-respected brolly makers include Weisbrod (1825), Faconnable (1850), Berluti (1895), and  Chatel Thomass (1920). Modern designers include Blunt in New Zealand,  Pasotti in Castellucchio, Mantova ( who makes a $600 bee crystal brolly and a Swarowski crystal-studded range ), and Burberry which offers a Nuubuk Ostrich handle. At $1850. The world’s two most expensive brollies are probably the German Brillant Luxus Schirme Crocodile, which retails for around $1650, and Mario Talarico of Naples Malacca stemmed crocodile handle Paisley Canopy at $1,999.

Fulton’s most luxurious umbrellas are part of its new “Diamond Collection” – the pink foulard “Princess” ( $160 plus shipping) and the folding “Marquise” ( $100).

But the Queen favors more reasonable, British -made luxuries. You can get a top-of-the-range waterproof birdcage from her private umbrella-maker for $40. Fulton’s also stocks Lucy Guinness’s designs like her beautiful “Raining Lips” umbrella.

Why Dolls Prams Are Great Gifts for Your Child