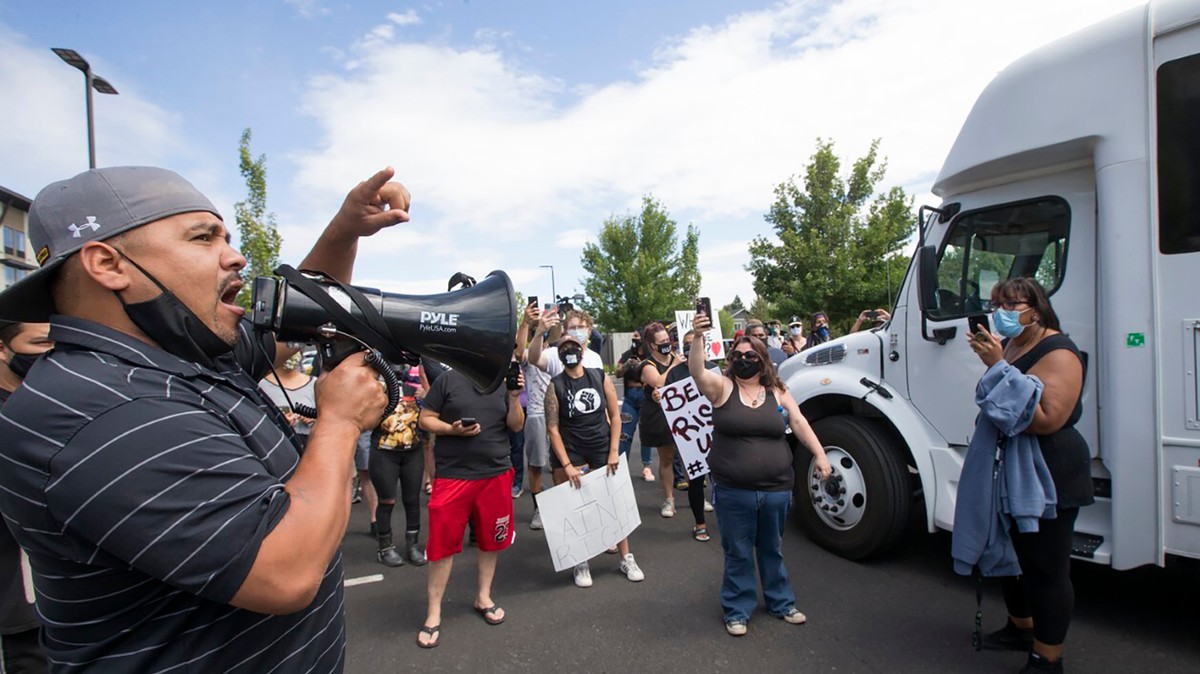 Hundreds of people swarmed ICE buses in an idyllic Oregon town on Wednesday trying to stop federal authorities from taking away two longtime residents — and wound up in a 10-hour-long standoff that ended when they were pepper-sprayed by heavily armed Border Patrol agents.

The scenes that unfolded after dark in a hotel parking lot in Bend, Oregon, were reminiscent of the unrest just 175 miles away in Portland, where protesters have clashed with law enforcement — including militarized federal agents — for months.

The protest started earlier in the day when Luke Richter, the founder of the Central Oregon Peacekeepers, a local activist group, heard rumors that ICE was doing a roundup in Bend, which is a “Sanctuary City,” meaning that local officials do not cooperate with federal immigration enforcement efforts. Richter drove around the small city, and came across two large white buses, with reinforced windows, parked in a hotel parking lot. He positioned himself in front of the buses and put out an APB on the Central Oregon Peacekeepers’ Facebook page.

Within about 20 minutes, two dozen members of the group had joined him, including local restaurant manager Nate Montgomery. He said that the ICE officers present were not in uniform: “They were wearing flannel shirts, like they’d been camping out in the wilderness.” They refused to identify their agency or names, Montgomery added, and when they realized that the activists weren’t leaving, they began using “intimidation tactics like loud voice commands and sirens.”

By then, officers from Bend Police Department had shown up. They confirmed that the plainclothes agents were indeed ICE and assured protesters they weren’t going to interfere or assist ICE in any way.

At around 1 p.m. Richter began live-streaming from in front of the bus. As word of the protest rippled through the Bend community, residents began showing up — including family members of the two men who had been detained. They were crying and pleading with the ICE agents to open the bus and give the men food and water, Oregon Public Broadcasting reported. One small boy was crying “Papa, papa, I love you.”

“Probably one of the most heartbreaking things I’ve seen,” said Montgomery. “At one point, someone took a Sharpie and wrote “Fuck ICE” all the way down the side of the bus. Then five Hispanic girls, in their early teens, started scrubbing it off. We asked why they were doing that, and they said ‘This is just going to make it so much worse for us’.”

In a statement, ICE attempted to justify the events of Wednesday night by describing the two detainees as “criminal aliens presenting a danger to public safety” and said they each had “a history of criminal violent behavior.” It’s not clear what they’re accused of or why they were detained. A local activist, Gus Juarez, told the crowd that one of the men was detained on his way to work, and the other was pulled over on his way home — and that both were longtime residents of the city, according to Bend Bulletin, a local newspaper.

Meanwhile, Bend Mayor Sally Russell urged protesters to “leave peacefully,” writing on Twitter that she’d “been informed that both men being detained have warrants out for their arrest.”

Other local officials took a different approach. Bend City Councilor Barbara Campbell parked her car in front of one of the buses and asked the ACLU of Oregon to intervene (they said that they were communicating with local attorneys in the area).

Deschutes County District Attorney John Hummell said he’d been on scene too, and was “impressed by the passion and empathy shown by our community.”

After being lambasted for her earlier comments online, Mayor Russell attempted to soften her position. “To be clear, in no way do I support ICE,” Russell wrote. “Nor can our Bend Police Force, because Oregon is a sanctuary state and it is illegal…I am very worried for everyone in our community, and especially our Latinx community.”

At around 11 p.m., when the crowd was still about 200-strong, the federal agents showed up. Protesters didn’t budge. “They came in, and compared to what’s been happening in Portland, they weren’t nearly as violent as what’s been happening there,” said Montgomery. Still, they deployed pepper spray to force the crowd to disperse, claiming that there was a medical emergency because one of the bus drivers was diabetic.

“I felt kind of a burst, then a spray across the front,” one resident told Bend Bulletin, a local newspaper. “Then lots of pandemonium. I couldn’t see anything after that. This isn’t right, this doesn’t represent Bend.” Another protester told local reporters that she’d been shot in the foot with a salt pouch by federal agents while she was trying to leave.

By 12:30 a.m. the agents were able to reach the buses and evacuate everyone from inside.

“While ICE respects the rights of people to voice their opinion peacefully, that does not include illegally interfering with their federal law enforcement duties,” ICE wrote. “ICE will take all necessary measures to ensure the safety of its officers and detainees, and will vigorously pursue prosecution against anyone who puts them in harm’s way.”

District Attorney Hummell wrote later that he’d “never been so disgusted by my government and so proud of my community.”

“Federal troops stormed the buses in full tactical gear,” Hummell wrote. “Unnecessary and outrageous. Never did I think I would see this in my country.” 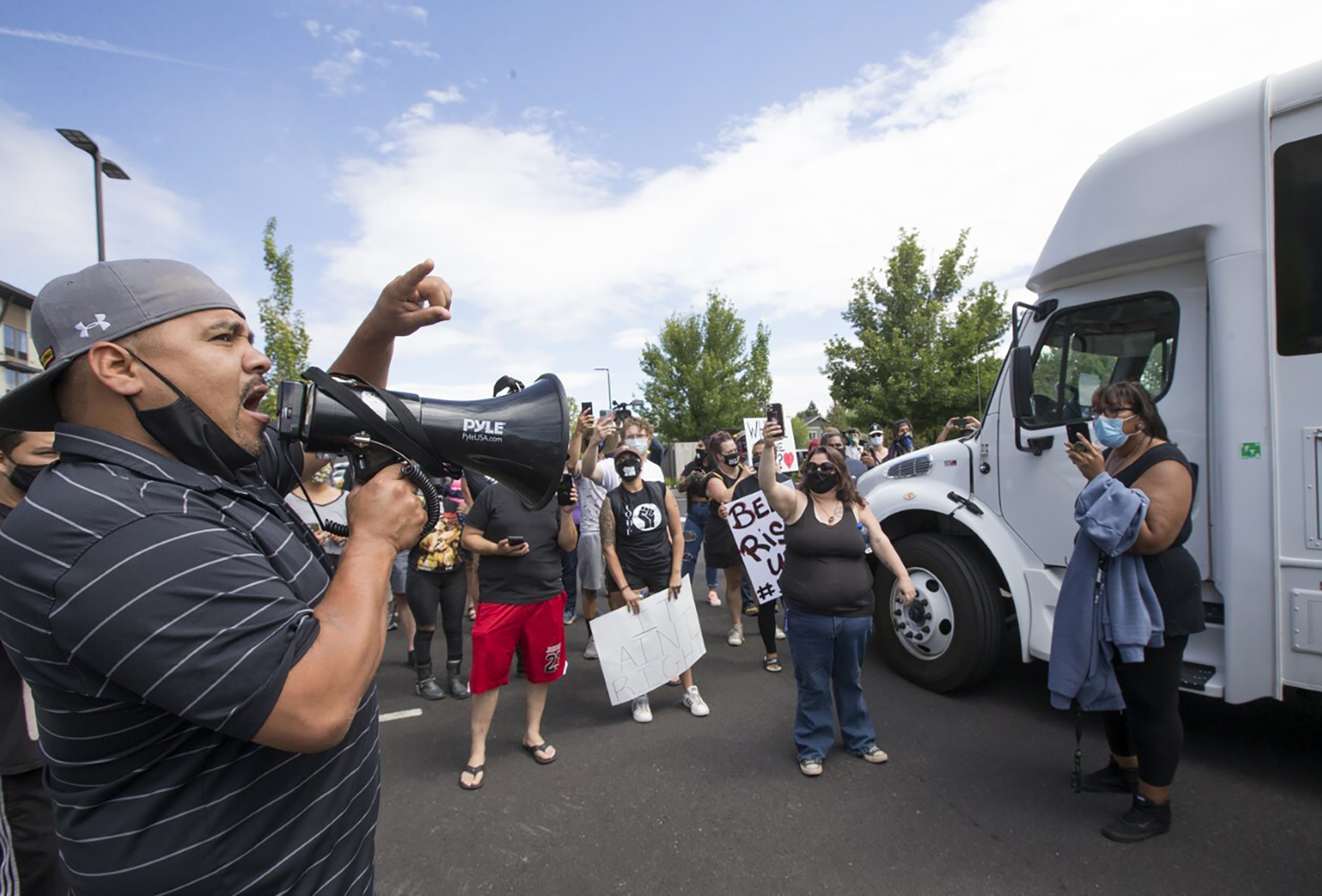 We Finally Have a Clue Why Vapes Are Making People Sick

How to Honor Your Irish Heritage