For almost three years, acolytes of the QAnon conspiracy theory have been waiting for a sign from President Donald Trump, the central character in their unhinged political fantasy. It’s a ridiculous storyline that claims the U.S. president is leading a top-secret campaign to foil a deep-state plot to oust him while simultaneously trying to uncover an international child sex-trafficking ring that includes Hillary Clinton, Tom Hanks, and Bill Gates.

Those followers believe he gave them that sign on Wednesday evening, when for the first time Trump acknowledged QAnon in public, in response to a question from a reporter.

“I don’t know much about the movement other than I understand they like me very much, which I appreciate,” he said. “I’ve heard these are people who love our country.”

The tacit endorsement of a movement the FBI has labeled a “potential domestic terrorist threat” sent the millions of QAnon supporters into rapturous celebrations and gave them a sense that, finally, everything they had been working towards was coming true.

“We are seeing an overwhelming feeling of validation among the QAnon community,” Julian Feeld, co-host of the QAnon Anonymous podcast, which takes a critical look at the conspiracy theory, told VICE News.

As well as legitimizing all the people already on board with the QAnon conspiracy — which includes several dozen Republican candidates running for Congress in November — experts believe Trump’s comments will further swell the group’s numbers and, most worryingly, increase the risk of violent acts perpetrated by QAnon believers out in the real world.

“It will make them even more certain of the righteousness of their cause,” Travis View, a conspiracy theory researcher, told VICE News. “The combination of more QAnon followers — and more confident QAnon followers — inevitably leads to a greater risk of even more dangerous, violent, or criminal actions committed by QAnon followers.”

Trump’s comments on Wednesday are the culmination of years of tacit support for a fringe group that has grown in size significantly in recent months, and now numbers in the millions.

Since 2018, Trump has retweeted dozens of accounts linked to the theory and more recently has been praising some of the dozens of QAnon-supporting political candidates running for office in November.

But Wednesday evening’s comments marked a watershed moment in his legitimization of the group.

Despite being the central character in the QAnon fantasy, Trump claimed, “I don’t know much about the movement” — something QAnon followers online believe is all part of Trump’s grand plan to throw his enemies off the scent.

“We’re saving the world from a radical left philosophy that will destroy this country and, when this country is gone, the rest of the world will follow.”

The White House tried on Thursday to walk back the comments, saying Trump never mentioned the conspiracy theory, but the damage had been done, and QAnon supporters were falling over themselves to share Trump’s comments.

Prominent QAnon “researcher” and adherent Dave Hayes — who is known online as “The Praying Medic” — said Trump endeared himself to the QAnon followers “by calling them like-minded patriots.”

One of the biggest QAnon social media accounts said Trump’s comments amounted to an “official endorsement” and meant Trump “united the entire conservative electorate and absorbed Q into MAGA.”

QAnon has flourished on Facebook and Twitter, with an internal Facebook report last week revealing that millions of its users describe themselves as QAnon supporters. Last month Twitter announced action against QAnon-linked accounts, and hours before Trump boosted the conspiracy theory on Wednesday, Facebook announced it had removed “over 790 groups, 100 pages, and 1,500 ads tied to QAnon.”

But thousands more accounts and groups remain, and QAnon supporters have also found homes in the darker corners of the internet, including on Gab, Parler, and 4Chan.

“They responded to Trump’s comments with elation and gloating,” View said. “It doesn’t get better than validation directly from Trump in their world, with the possible exception of their fantasy of Hillary Clinton being arrested finally being fulfilled.”

What began in October 2017 with the original automate your posting, purportedly by the anonymous deep-state source known as Q, was initially dismissed as a fringe conspiracy theory. Even when a QAnon believer from North Carolina traveled to Comet Ping Pong in Washington, D.C., in 2018 to investigate claims children were being held in a basement and fired a rifle inside the restaurant, it was dismissed as a one-off.

Hours after Trump’s comments, Right Wing Watch reported that a woman from Waco, Texas, was arrested last week and charged with aggravated assault with a deadly weapon and driving while intoxicated​. She appears to have been motivated by the QAnon conspiracy theory to try to run down two strangers with her car in a bid to “[save] a child” from “pedophiles.”

Earlier this week it was reported that a woman allegedly planned to violently kidnap her son from his foster home, before going on the run, as she believed the QAnon conspiracy theory that foster care is a front for a child sex-trafficking ring.

Earlier this month, the New York Times reported that QAnon supporters are hijacking anti-trafficking hotlines with their conspiracy theories. This happened following a recent bogus QAnon conspiracy theory about Wayfair.

In July, a QAnon supporter attacked the home of Canadian Prime Minister Justin Trudeau. And last year, QAnon was used as a rationale for the murder of a reputed mob boss on Staten Island.

Joe Biden’s campaign slammed Trump’s comments as “giving voice to violence,” and experts believe that giving the conspiracy theory oxygen will embolden the group just like previous comments have done for other groups.

“His affection for QAnon is consistent with his praise of white supremacists, Klansmen, and Nazis that marched in Charlottesville three years ago this month,” David Dozier, professor emeritus in the School of Journalism & Media Studies at San Diego State University, told VICE News.

“Like the resumption of federal executions this summer, cozying up with an organization that the FBI considers a terrorist threat is simply more red meat for President Trump’s red base. When he aligns with an identified terrorist organization, he puts the lives of innocent Americans at risk.” 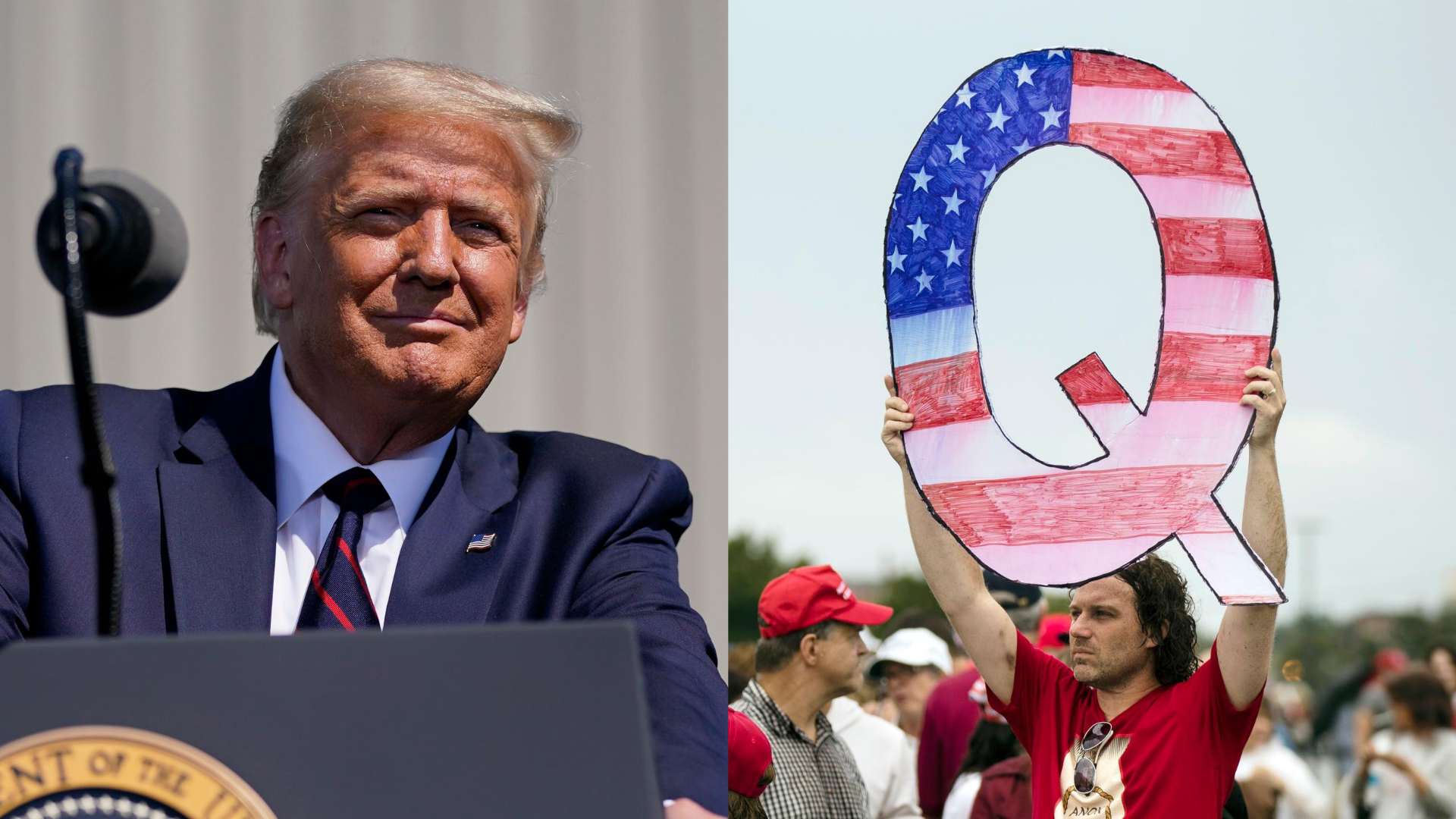