U.S. President Donald Trump delivers his acceptance speech for the Republican presidential nomination on the South Lawn of the White House August 27, 2020 in Washington, DC. (Photo by Chip Somodevilla/Getty Images)

It was like a double-disc greatest hits album from a one-hit wonder.

President Trump meandered through more than 70 minutes of lies, half-truths and regurgitated attacks that kept circling back to the idea that Joe Biden will let the faceless mob burn your homes and kill your families. But even then, he couldn’t seem to make his speech great again.

Trump sounded bored throughout much of an unconventional convention speech illegally delivered from the White House’s South Lawn that was packed with lies, some in the original twelve pages of prepared remarks and some ad-libbed by the president himself.

Just a handful of Trump’s pre-prepared lies included claims that Joe Biden supports abortion “right up to the moment of birth” (he doesn’t), “has promised to abolish the production of American oil, coal, shale, and natural gas” (he hasn’t) and supports defunding the police (also a lie). He claimed Biden, who has long sat near the center of the Democratic Party, “ is a Trojan horse for socialism.”

He said that they “gave everything you can possibly give” to protect nursing homes even though severe PPE shortages caused huge death tolls early on in those centers, He said that the U.S. had developed “a wide array of effective treatments” for COVID, though most treatments’ effectiveness are so far are unproven.

Trump felt the need to ad-lib some other falsehoods. “And remember this: They spied on my campaign and they got caught. Let’s see what happens,” he said, referencing the Obama administration, even though that’s been proven to be a lie.

At no point did Trump acknowledge that the U.S. leads the world in coronavirus cases and fatalities per capita, though he came close when he accidentally garbled a sentence to claim “we have pioneered the fatality rate.”

Most of the speech was a looping return to the threat posed by sometimes-violent unrest that has broken out in cities across the nation in response to police killings of Black people. He mentioned rioters five times and looters four times. And he attacked the Black Lives Movement, defended the police — and blamed Democrats for the spike in racial tension and unrest across the country, even though he’s been president for almost four years.

“If the Democrat Party wants to stand with anarchists, agitators, rioters, looters, and flag-burners, that is up to them, but I, as your President, will not be a part of it. The Republican Party will remain the voice of the patriotic heroes who keep America safe and salute the American flag,” he said.

“Just imagine if the so-called peaceful demonstrators in the streets were in charge of every lever of power in the U.S. Government. Just think of that,” he continued.

While Trump sought to show empathy for the dead and suffering, he never took ownership of his administration’s failed response.

“Many Americans, including me, have sadly lost friends and cherished loved ones to this horrible disease as one nation, we mourn, we grieve, and we hold in our hearts forever the memories of all of those lives that have been so tragically taken,” he said.

Trump then inadvertently ad-libbed one of his few accurate lines about the virus: “So unnecessary.”

Even his brags were weird flexes.

“Look how low your gasoline bill is, you haven’t seen that in a long time,” Trump said with a smirk about gasoline prices that have plunged because it’s unsafe to travel.

“I say very modestly, I have done more for the African-American community than any president since Abraham Lincoln, our first Republican president,” he said at another point.

But Trump wasn’t done. After attacking Democrats for backing “cancel culture, speech codes, and soul-crushing conformity,” he ticked through praise of American icons from Wyatt Earp to Buffalo Bill to Davey Crocket like a 50s school kid rambling to fill the time requirement for an oral essay in history class.

As often happens at his more lackluster rallies, some people didn’t make it through the whole set, wandering out before the president concluded.

It remains to be seen whether Trump’s effort to blame Biden for ongoing unrest in American cities could pay political dividends. But his meandering mess of a convention speech is unlikely to move many voters.

Cover: U.S. President Donald Trump delivers his acceptance speech for the Republican presidential nomination on the South Lawn of the White House August 27, 2020 in Washington, DC. Trump gave the speech in front of 1500 invited guests. (Photo by Chip Somodevilla/Getty Images) 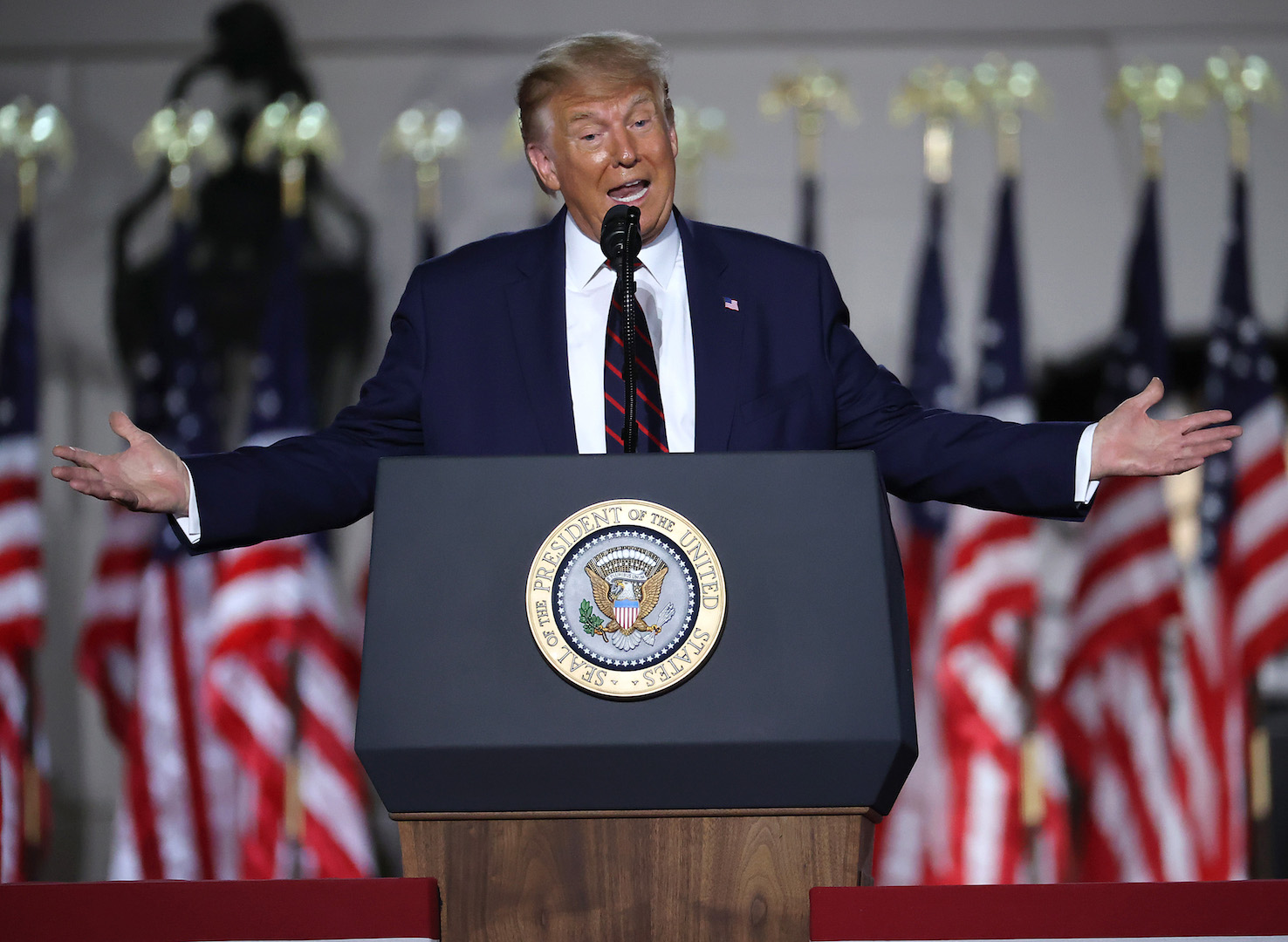 Michael Gove: Levelling up must not fail new Tory voters