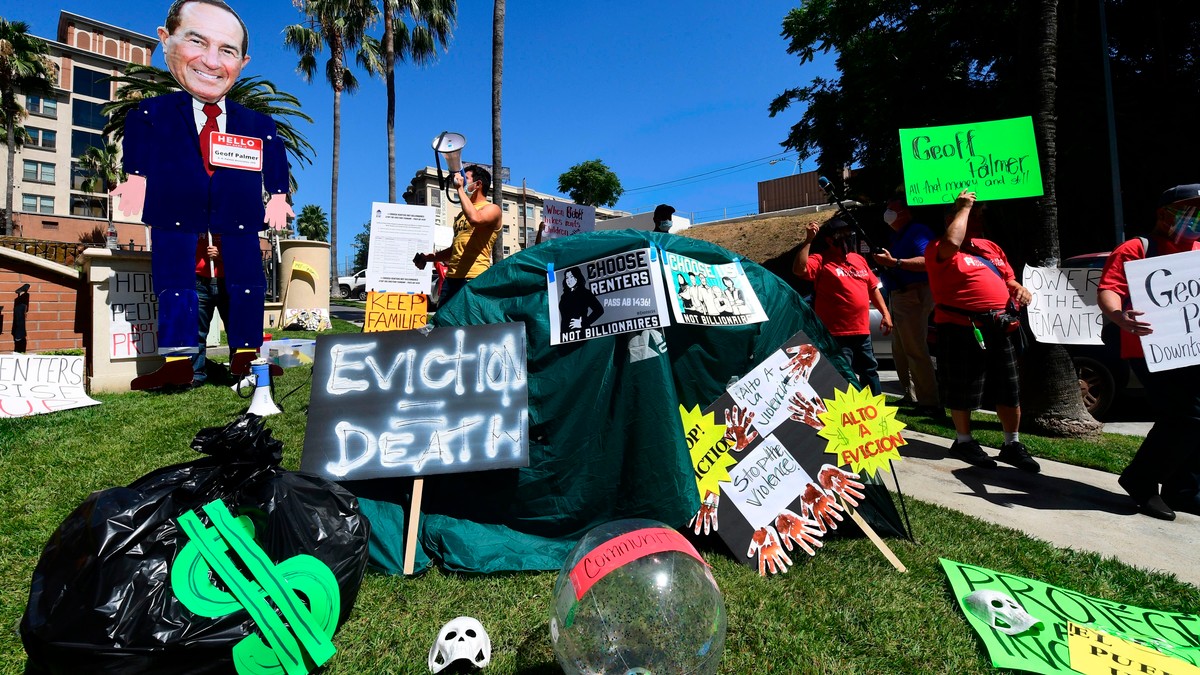 One woman called a local helpline in Michigan because she was struggling to pay her rent and her landlord had been asking her for sexual favors instead. An elderly woman in Texas called her area’s helpline when her electricity was about to be cut off, which she needed to power her oxygen tank. And several people have called lines in Florida over suicidal thoughts.

During the COVID-19 pandemic, requests like these have soared at the centers that run 211, a network of local helplines staffed by trained specialists who connect people to nearby services when they’re in need.

The centers, part of 241 locations across the country, link people to organizations that can provide rental assistance, food, health care, and more. Some have seen their typical call volume rise by as much as 1,200% since the virus gripped the country in March, according to Rachel Krausman, senior director for 211 at United Way Worldwide. United Way financially supports or operates many of the nation’s centers.

In the past few months, most people have been calling because they need help paying rent or other bills. Others are first-time callers, and some just need someone to talk to.

“They’re just so worried and desperate and in crisis because of their financial situation like we’ve never seen before,” said Catherine Rea, vice president for 211 at Heart of Florida United Way, which serves 15 counties in central Florida and 42 counties in central Tennessee. “We’ve had several suicide callers.”

The demand at 211 centers — which have seen their call volumes grow by an average of 150% to 200% over the past several months — could continue to rise. Temporary housing and utility protections are ending for millions of out-of-work Americans, leaving more households vulnerable to evictions and shutoffs.

Since the end of July, unemployed households have also gone without the extra $600 weekly benefit that allowed many to scrape by as much of normal life shut down across America. If the federal government doesn’t create significant financial aid programs soon, an estimated 30 million to 40 million Americans could face eviction by the end of the year.

“We really need there to be more resources available to people so that we can say ‘yes’ more often and reduce the amount of people who call for whom there isn’t something available,” Krausman said.

Much of the time, the 211 specialists are able to help their callers. Ruthie Paulson, a Grand Rapids-based 211 specialist at Heart of West Michigan United Way, referred the woman being sexually harassed by her landlord to legal assistance.

And a 211 specialist at United Way of Greater Houston helped the oxygen-dependent caller land an extension on her electricity bill, as well as access financial assistance, according to Mary Vazquez, vice president of community outreach at the organization.

But that doesn’t mean it’s always easy to locate financial aid, especially when demand is so high. The 211 specialists are also dealing with a litany of intense, emotional calls while working from home and navigating the pandemic themselves.

“This year has been the most stressful that many of us have faced since we’ve provided this service,” Vazquez said.

Because of that, United Way has lobbied for $150 million in emergency funding for 211 centers that could use the money to hire more staff or upgrade their technology, among other policy demands. In a July letter to congressional leaders, the organization warned that demand on the centers would likely continue to increase “well beyond the current capacity of the 211 system.”

When policymakers aren’t paying attention to just how badly a community’s suffering, 211 center data can act as a canary in the coal mine for the overall needs of low-income households.

For instance, 211 centers picked up on water-quality issues in Flint months before news of the city’s lead contamination crisis broke: Callers had pressing concerns about what was coming out of their taps, according to Matthew Kreuter, a professor of public health at Washington University in St. Louis. He and others at the university developed 2-1-1 Counts, which aggregates and displays 211 center request data.

And nine months before a housing crisis spurred a global recession more than a decade ago, a discernible spike in calls appeared for mortgage assistance.

Now, the 211 data may show a widening financial wound that’s unlikely to heal anytime soon, even as the stock market soars and the ultra-rich grow richer.

“What they’ve done in the past five, six months is nothing short of heroic. They are as much pandemic heroes as are the front-line healthcare workers and grocery store workers,” Kreuter said of the 211 centers. “Their call volume today is still twice what it was pre-pandemic, and in the first months of the pandemic, it was three and four times as high.”

After an initial surge of calls to 211 centers in March, government officials cobbled together a patchwork of protections like eviction and utility shutoff moratoriums, plus financial assistance programs —  on top of the nation’s existing safety net — to keep millions of newly unemployed people fed, healthy, and housed.

Coupled with the CARES Act, which provided unemployed workers with the extra $600 benefit and a one-time stimulus check to most households, the country found itself remarkably able to temporarily stave off a rise in poverty despite a sputtering economy. Requests for rental assistance and referrals to food pantries at some 211 centers, in turn, dipped in months that followed, although requests for help were still far higher than usual, according to data from 2-1-1 Counts’ pandemic-related spinoff, Focus-19.

Then, those protections melted away — even as the pandemic grew worse in some parts of the country. More than half of all states currently lack the eviction moratoriums that once saved non-paying tenants from removal, either because officials allowed them to lapse or never enacted the temporary bans in the first place.

Tennessee’s 211 centers, for example, saw a 67% increase in requests for housing assistance in August compared to May, when the state still had an eviction moratorium, according to data from 2-1-1 Counts. Similar trends have cropped up in Wisconsin and North Carolina.

The nationwide moratorium on booting renters from federally-backed housing also expired at the end of July.

“In light of all of this, too, some callers are also looking for homeless shelters if they were already evicted with nowhere else to go,” said Paulson, the 211 specialist in Grand Rapids. (Her state started up eviction proceedings again last month, after pausing due to the pandemic.)

By the end of September, bans on utility shutoffs, which were temporarily blocked by many cities and states, are also largely set to expire for overdue customers.

At the same time, out-of-work Americans have significantly less take-home pay to prevent evictions or shutoffs on their own; when the $600 benefit lapsed in late July, it slashed the average weekly payment from $812 to $257, according to a working paper from the National Bureau of Economic Research.

Since Congress hasn’t reached a deal on another stimulus package, states are relying on a $300 weekly federal subsidy to help their out-of-work residents, although some people won’t qualify or will have to wait weeks to receive a check.

“I’ve just been so disheartened to see how our president has turned a blind eye to so many families that are suffering in this pandemic, but I really hope that we’re able to get some type of new stimulus package,” Paulson said. “We’re just crossing our fingers for that at this point.”

Cover: Renters facing risk of evictions and their supporters protest as they demand developer Geoffrey Palmer to cancel their rent on July 31, 2020 in Los Angeles. (Photo by Frederic J. BROWN / AFP) (Photo by FREDERIC J. BROWN/AFP via Getty Images) 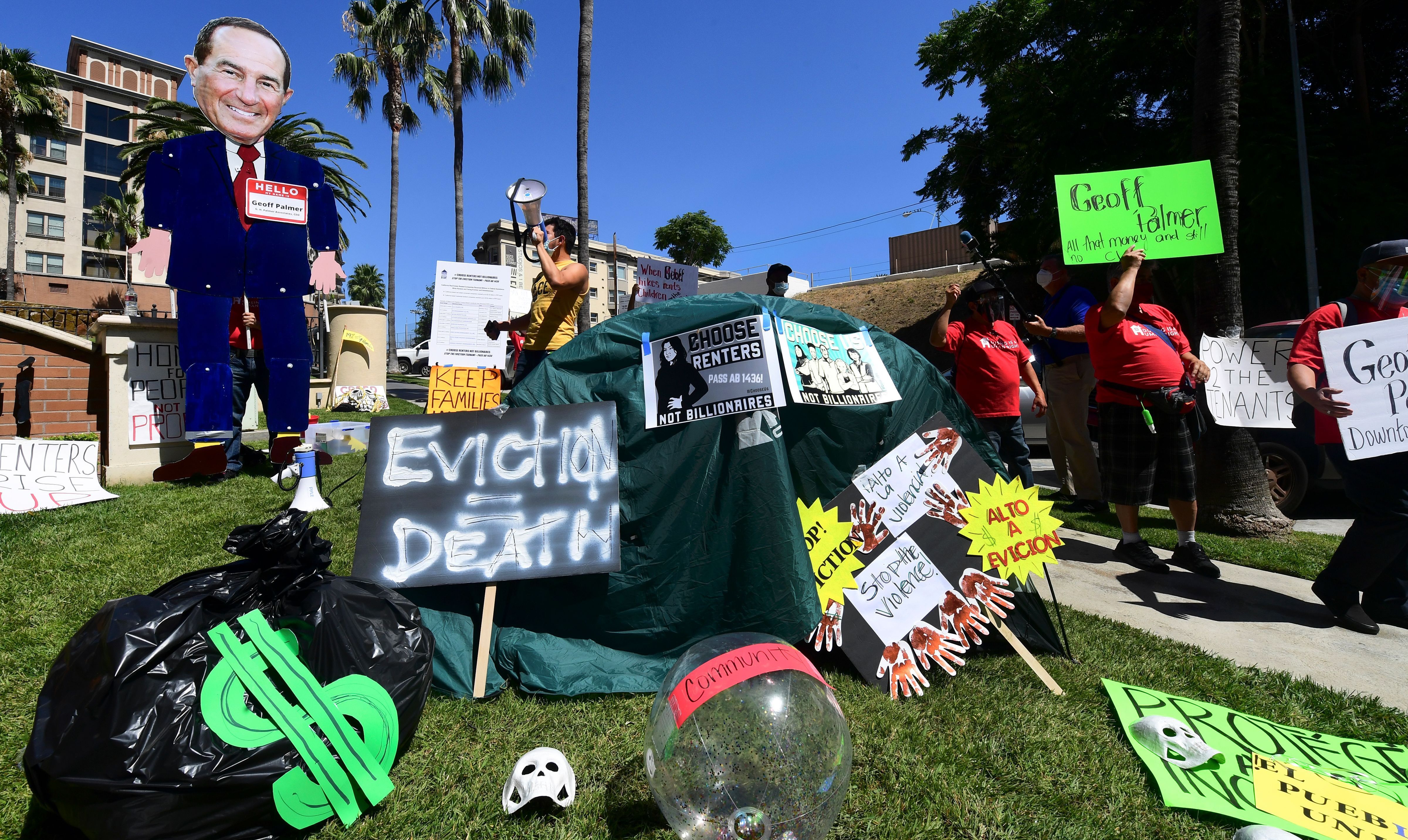 Are we entering a ‘golden age’ for trade unions?