For months, Louisville police said they fired into Breonna Taylor’s apartment — killing her in her hallway — after they were shot at by her boyfriend, Kenneth Walker, whom they didn’t expect to be there. Both an officer involved in the raid and Louisville Prosecutor Tom Wine have asserted that the Louisville Metro Police Department believed Taylor was alone that night.

But new documents obtained by VICE News show the Louisville Metro Police Department (LMPD) knew other people could be there. They were also aware of Taylor’s relationship with Walker and the fact that he was a licensed gun owner. It’s unclear whether the team that conducted the raid misrepresented what they were told before executing it, or if the information simply wasn’t shared with them before they did.

Current and former Louisville Metro Police Department officers told VICE News that a licensed gun owner being present increases the risk level of executing a search warrant and should have informed how the raid was carried out, especially because Kentucky is a stand your ground state.

A day before the police raid on March 13, a detective involved in the investigation requested intelligence on Walker, according to a source with knowledge. The intelligence was provided on the same day it was requested and included a picture of Walker and Taylor together. It also showed that Walker legally owned a handgun.

“For someone from that unit to be requesting information on him the day before tells me that they knew he would be around or likely would be around,” said the source, who asked to remain anonymous for fear of retribution. “It also shows they knew before the raid that he was a licensed gun owner.”

On the night Breonna Taylor was killed, the Louisville Metro Police Department targeted five properties they believed to be connected to a larger drug operation: Taylor’s apartment on Springfield Drive, a home on Muhammad Ali Boulevard, and three homes on a single block of Elliott Avenue, including 2424 Elliott Avenue, where the police arrested Jamarcus Glover, the main target of their investigation, that night.

The investigation was led by Place Based Investigations, or PBI, a relatively new police unit created in 2019 to focus on crime hot spots in the city. But other units were roped in on the night of March 12 and early morning of March 13 to help execute the various search warrants.

The intelligence on Walker was requested by a member of PBI who was involved in the investigation.

Sgt. Jon Mattingly, one of three officers placed on administrative reassignment after discharging his weapon that night, has said his team was briefed on plans for the raid at about 10 p.m. His unit was not leading the drug investigation but were brought in because it was “a heavy, manpower intensive operation and they just needed bodies.” His team was told that Taylor’s address was considered a “soft target,” and though officers had obtained a no knock search warrant, they wanted them to knock and announce.

In Mattingly’s interview with the Louisville Metro Police Department’s Public Integrity Unit, he said his team was told “she [Taylor] should be there alone because they knew where their target [Jamarcus Glover] was.” He added that he guessed “they thought that he [Glover] was her only boyfriend or only acquaintance.”

Immediately after officers rammed through Taylor’s front door on the night of the raid, Walker says he fired a warning shot. He insists he and Taylor heard banging at the door, but that they never heard officers announce they were police. More than a dozen neighbors, including one who lives in the same unit, also told VICE News they never heard police announce themselves. The Louisville Metro Police Department, however, maintains officers did announce themselves before entering.

Walker’s initial shot allegedly hit Mattingly in the leg before officers returned fire. They let off 35 bullets, according to a lawsuit filed on Tuesday on Walker’s behalf. Walker, who was immediately arrested following the raid, was charged with attempted murder of a police officer and assault. He spent two weeks in jail and another two months on house arrest before the charges were dismissed in May.

“It is more evidence of the dishonesty of LMPD with connection to this case, and the incompetence,” Walker’s attorney Steven Romines said about the police department’s request for intelligence on his client shortly before the raid on Taylor’s home. “If they didn’t know he’s there that is so inherently incompetent and reckless. And if they did, why do they continue saying they didn’t? They cannot be reconciled.”

The request for information about Walker ahead of the raid isn’t the only evidence that suggests the Louisville Metro Police Department knew he could be at the apartment: A risk assessment form associated with the raid on Taylor’s home shows they believed she might not be alone — and that they expected a handgun could be present.

All five list Glover as the target. Sgt. Kyle Meany of PBI is the supervisor.

The forms are broken into four categories: location factors, weapons factors, criminal history, and general risk factories. Under each header, specific line items are given a numerical value such as, multiple suspects (5), assault weapons (28), prior Assault on Police charge (10) or Gang Association (5). All of those line items are totaled up to determine whether or not SWAT needs to be involved, either in executing the search warrant or in consultation prior to deployment.

According to the risk matrix associated with Taylor’s address, officers indicated they expected other people to be at her apartment by including ‘additional persons on-site.” They didn’t check “multiple suspects,” which would have shown they thought other people named on the warrant — like Glover — might be there.

At the time of the raid, Taylor’s younger sister Juniyah Palmer was living in the apartment with her, though she was on a trip that particular week. Walker also frequently spent the night there.

The risk matrix also includes the presence of a handgun as a potential factor. Neither Taylor nor her sister owned firearms. But Walker, as indicated in the intelligence provided to the Louisville Metro Police Department before the raid, was a licensed firearm owner.

Lastly, the form indicates the potential presence of someone with a criminal history that includes charges related to firearms or concealed carry deadly weapons, which is also consistent with Walker, who VICE News has learned was charged in 2016 for carrying a weapon without a license. The charge has since been dismissed, and no longer appears on his record, but the police would have known about it.

Taken together, the only three risk factors indicated on the form appear to line up with the intelligence on Walker that was shared with the police before the raid.

“I’m shocked by that information,” Metro Council President and former Louisville Metro Police Department officer David James told VICE News after learning about the risk assessment matrix for Taylor’s apartment. “I had not heard about it until just this moment and I’m wondering if that maybe should’ve been something for them to consider a different approach to the situation.”

Even with these risk factors, the raid on Taylor’s home was determined to be significantly lower risk than the other four raids planned for that night. Taylor’s home was given a total score of 15 points, compared to two of the other locations, which were assigned 88 points each. That’s likely why SWAT was not present for the entry of her apartment, even though they were involved in the other raids.

It’s unclear why the information on the matrix does not align with what Mattingly says his team was told to expect during the pre-operational briefing for the raid. The matrix has no date or timestamp so it’s unclear if this form was filled out prior to the raid, as the Louisville Metro Police Department’s protocol requires, or after it was executed. The department declined to comment while investigations are ongoing.

VICE News also reached out to Commonwealth Attorney Wine for comment. His office didn’t respond directly to questions about the contradictions between the department’s knowledge about Walker prior to the raid and that officers on scene said they expected Taylor to be alone.

In 2015, criminologist Brian Schaeffer published a study after observing 73 search warrants conducted by the Louisville Metro Police Department. (Schaeffer concealed the name of the department, instead calling it Bourbonville, but VICE News has confirmed that it was the Louisville Metro Police Department.) In his findings, Schaeffer wrote that “not all detectives take filling out the search warrant matrix seriously,” and that “detectives will also wait to fill out the matrix until after the warrant and when they have to file their search warrant affidavit, arrest forms, and evidence logs.”

The documents raise further questions about the Louisville Metro Police Department’s statements about what happened the night of the raid. Lawyers for Taylor’s family have also disputed the timeline of that night. The police department, for instance, said the raid on Taylor’s apartment happened at the same time as the raid on 2424 Elliott Avenue, but internal documents, including emails and a K-9 report filled out that night that have both been reviewed by VICE News, show the raid on Elliott happened about 30 minutes earlier.

“It’s gotten to the point where nothing surprises us, but everything disappoints us,” the family’s attorney Sam Aguiar told VICE News. “This further undermines the credibility of the narrative that LMPD is trying to portray.”

VICE News also recently obtained crime scene photos taken by the Louisville Metro Police Department and included as part of discovery in Walker’s criminal case before it was dismissed. Among the more than 1,200 photos are pictures of at least one officer involved in the raid on Taylor’s home wearing a body camera, and at least one more wearing a body camera holder. It’s unclear if the camera that was present was turned on during the raid, but the department has previously stated that the officers involved do not wear body cameras.

On Sunday, Attorney General Daniel Cameron announced that his office had received the ballistics report from the raid of Taylor’s apartment. He said there will be no announcement this week about his office’s ongoing investigation into the case and whether charges will be filed against any of the officers involved, but multiple sources have told VICE News a decision could be made as soon as next week.

Cover: Right: Kenneth Walker, the boyfriend of Breonna Taylor attends the Bre-B-Q during the second day of BreonnaCon at Shawnee Park on August 23, 2020 in Louisville, Kentucky after the death of Breonna Taylor. (Chris Tuite/ImageSPACE/MediaPunch /IPX); Left: Breonna Taylor (Photo provided by family) 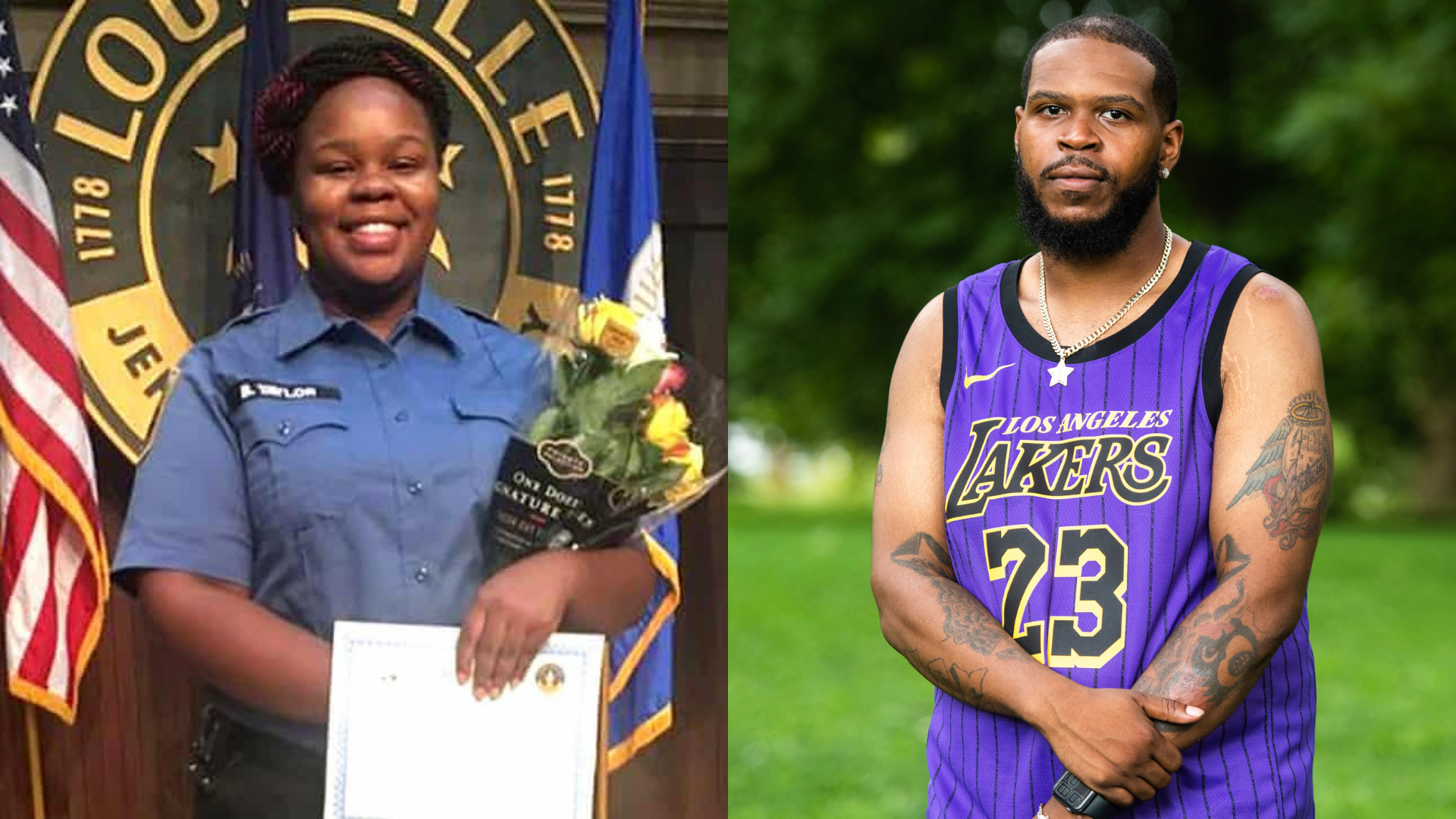 The Kraken Has Officially Left The Building

Career Opportunities: Reasons Construction Contractor is the New “It” Job

‘A new lockdown will be far worse for businesses’