The seven Rochester cops involved in the killing of 41-year-old Daniel Prude in March have been suspended with pay, mayor Lovely Warren said on Wednesday.

Warren said she had made the decision against the wishes of the city council, though earlier in the day, the Rochester City Council had sent her a letter requesting the officers be placed on administrative leave.

“I understand that the union may sue the city for this, they shall feel free to do so,” she said. “I have been sued before.” Warren said that the suspended officers would be paid due to contract rules. The Rochester Police Locust Club—so named for the type of wood once used in the nightsticks carried by Rochester cops—did not immediately respond to a request for comment.

Rochester police encountered Prude around 3 a.m. on March 23 while he was in a mental health crisis and running naked through the streets. Though he complied with requests of officers, they placed a “spit hood” over his head because, as documents released by the family Wednesday showed Wednesday, cops claimed he was spitting in their direction and they were afraid of getting coronavirus.

But after being placed in the hood, Prude became distressed and asked officers to remove it. They responded by slamming his head into the pavement, holding it down, and putting a knee in his back. An autopsy later showed that Prude’s death was a homicide caused by “complications of asphyxia in the setting of physical restraint.”

The case only began to receive public attention on Wednesday, when the family released body camera footage and police documents to the media. In a press conference on Wednesday, Prude’s brother called it a “cold-blooded murder.”

Speaking Thursday, Warren took responsibility for the conditions leading to Prude’s death. “Mr. Daniel Prude was failed by our police, our mental health care system, our society, and by me,” Warren said. “And for that I apologize to the Prude family and all of our community.”

“I know that I must do better as a leader in this community,” Warren added. “The buck stops today with me, here, at City Hall.  We must as a society, a city, a community face the truth. Institutional and structural racism led to Daniel Prude’s death.”

City councilors have slammed Warren and the police department for a lack of transparency. While Warren said she first saw the video August 4, she claimed she had been instructed not to discuss the case by Attorney General Tish James. City councillor Michael Patterson told the Rochester Democrat and Chronicle that was “bullshit.”

“There was absolutely nothing done to, number one, remedy the situation, or number two, prevent it from happening again,” city councillor Jose Peo told the Democrat and Chronicle. “That shows a complete lack of leadership, in my opinion.”

Hundreds of protesters gathered in Rochester for the second night on Thursday, and tensions ratcheted up as police armed with batons fought back protesters in front of the city’s Public Safety Building and fired pepper balls at them. The police said that eight people were arrested and two officers were injured.

Earlier, the Rochester City Council sent a letter to Warren asking that the police use restraint in dealing with the protests, specifically requesting that they not use pepper balls.

“We do not need any militaristic outfitting and use of pepper balls at this incredibly sensitive time for our community. Peaceful protesting is a critical part of our community grieving process,” the city council wrote.

City councillor Mitch Gruber told the Democrat and Chronicle that the police response later that night was “unnecessarily aggressive.”

“By morning I expect to hear from the mayor and chief as to why our requests weren’t met,” Gruber told the Democrat and Chronicle, “and how they will appropriately address continued, sustained peaceful protest.”

Cover: A demonstrator stands in front of a line of police officers outside the Public Safety Building in Rochester, N.Y., Thursday, Sept. 3, 2020. (AP Photo/Adrian Kraus) 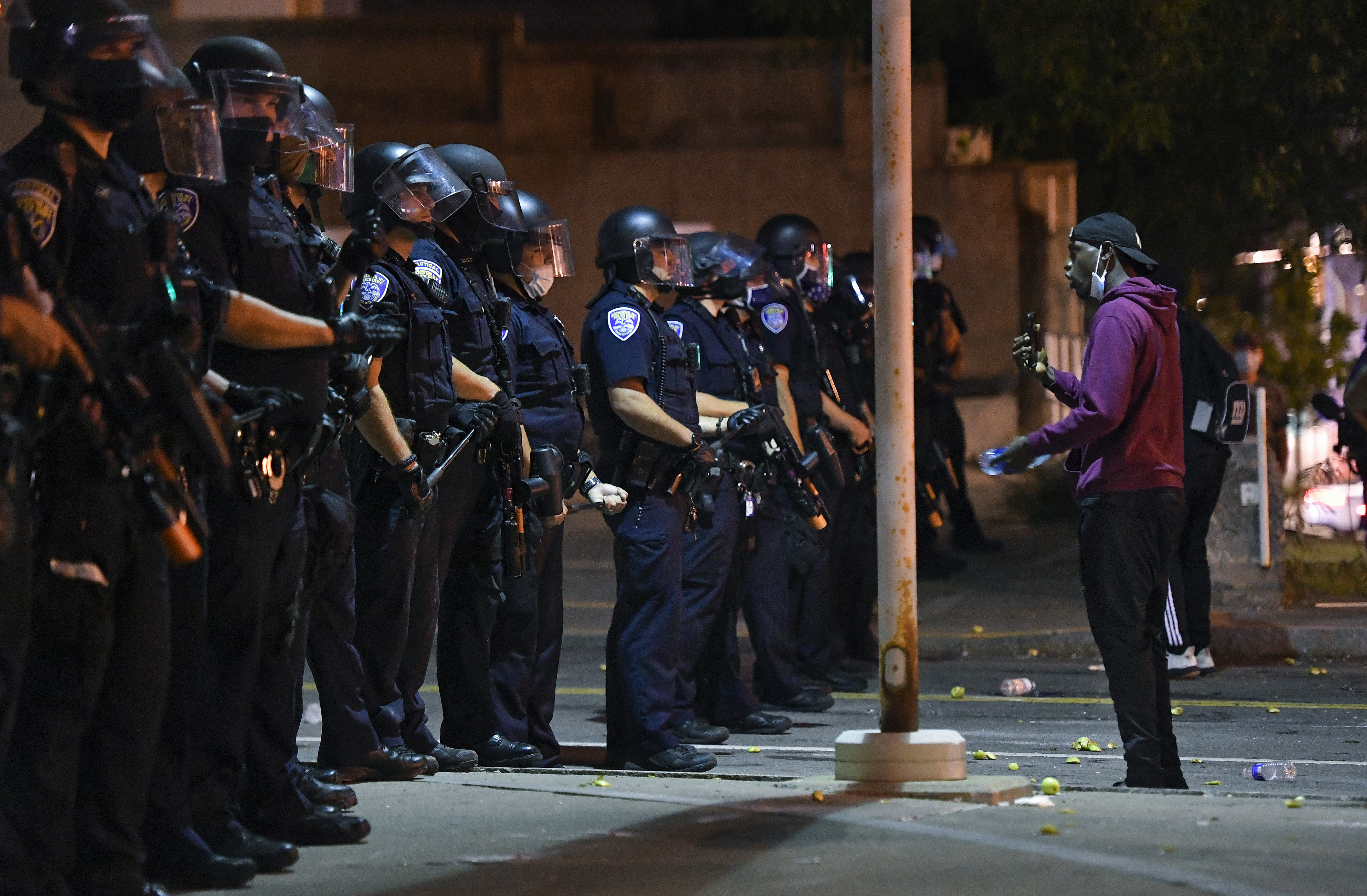 CEO Secrets: ‘No money is better than the wrong money’

JD Sports furious after being forced to sell Footasylum