President Donald Trump, who dodged the draft during the Vietnam war and has openly questioned John McCain’s status as a war hero on multiple occasions, says he’s absolutely certain that he has never referred to the former senator as a “fucking loser” or derided America’s soldiers who died in World War I as “suckers.”

Trump on Thursday night angrily denied a raft of fresh allegations about derogatory comments he made in 2018 during a trip to France, and comments he made to staff following McCain’s death.

He described anyone who would make such remarks as “lowlifes,” “liars,” and “animals,” describing the Atlantic magazine, where the allegations appeared, as a “terrible magazine.” The president said he’d be willing to “swear on whatever, or whoever, I was asked to swear on” to prove he never made the comments.

The allegations — published by the Atlantic Thursday evening and since confirmed by other outlets — say that Trump skipped a visit to an American military cemetery in France not because of bad weather, as the president claimed at the time, but because he was worried the rain would mess up his hair and didn’t feel it necessary to honor America’s war dead.

“Why should I go to that cemetery? It’s filled with losers,” Trump told senior staff on the morning of the scheduled visit in November 2018, according to four sources speaking to the Atlantic. In a separate conversation on the same trip, Trump referred to the more than 1,800 Marines who lost their lives in the Belleau Wood battle as “suckers” for getting killed.

But that was not the only time Trump had launched such blistering attacks on America’s military heroes.

When McCain died in August 2018, Trump told his senior staff: “We’re not going to support that loser’s funeral.” The Atlantic reported that Trump became furious when he saw flags lowered to half-staff. “What the fuck are we doing that for? Guy was a fucking loser,” Trump reportedly said.

Trump even disparaged the memory of dead soldiers directly to members of their own families.

In 2017, on a trip to Arlington cemetery with director of homeland security John Kelly — who would subsequently become Trump’s chief of staff — the pair stood over the grave of the Kelly’s son, Robert, who was killed in Afghanistan in 2010 aged just 29.

“I don’t get it. What was in it for them?” Trump said to Kelly, according to the Atlantic.

Some of Trump’s comments have been confirmed by other publications.

“A senior Defense Department official with firsthand knowledge of events and a senior U.S. Marine Corps officer who was told about Trump’s comments confirmed some of the remarks, including the 2018 cemetery comments,” AP reported.

Trump, who is scrambling to make up ground on his Democratic rival Joe Biden, is desperate to hold onto the support Republicans have typically enjoyed among military personnel.

So it was unsurprising to see the president react so aggressively and quickly to this story.

Trump, who escaped serving in Vietnam because of the alleged presence of bone spurs in his feet, was so eager to counter the allegations that he proactively walked over to reporters under the wing of Air Force One after returning Thursday night from a rally in Pennsylvania.

“If people really exist that would have said that, they’re lowlifes and they’re liars,” Trump said, above the noise of the plane’s engines, the New York Times reported. “And I would be willing to swear on anything that I never said that about our fallen heroes. There is nobody that respects them more.” He added, “What animal would say such a thing?”

Later, on Twitter, Trump addressed the McCain allegations, saying that he had personally approved the lowering of flags to half-mast and the organization of the senator’s “first-class funeral” — which Trump was not invited to.

Trump and McCain had a long history of enmity stretching back decades, but it came to the attention of most people during the 2016 election campaign when Trump addressed a campaign rally and questioned whether McCain was “a war hero because he was captured” in the Vietnam War. Trump said he preferred “people that weren’t captured.”

Since McCain’s death, his daughter Meghan has continued to criticize Trump and his attacks against her father.

“No one is more acutely aware of how vile and disgusting Trump has been to my family, it is still hard to understand,” she tweeted Thursday night. “This never stops being incredibly painful, triggering, and it rips off new layers of grief that wreak havoc on my life. I wouldn’t wish any of it on my worst enemy.”

Cover: President Donald Trump walks down the steps of Air Force One at Morristown Municipal Airport in Morristown, N.J., Friday, Aug. 14, 2020. Trump heading to New York to visit with his younger brother, Robert Trump, who has been hospitalized in New York. (AP Photo/Susan Walsh) 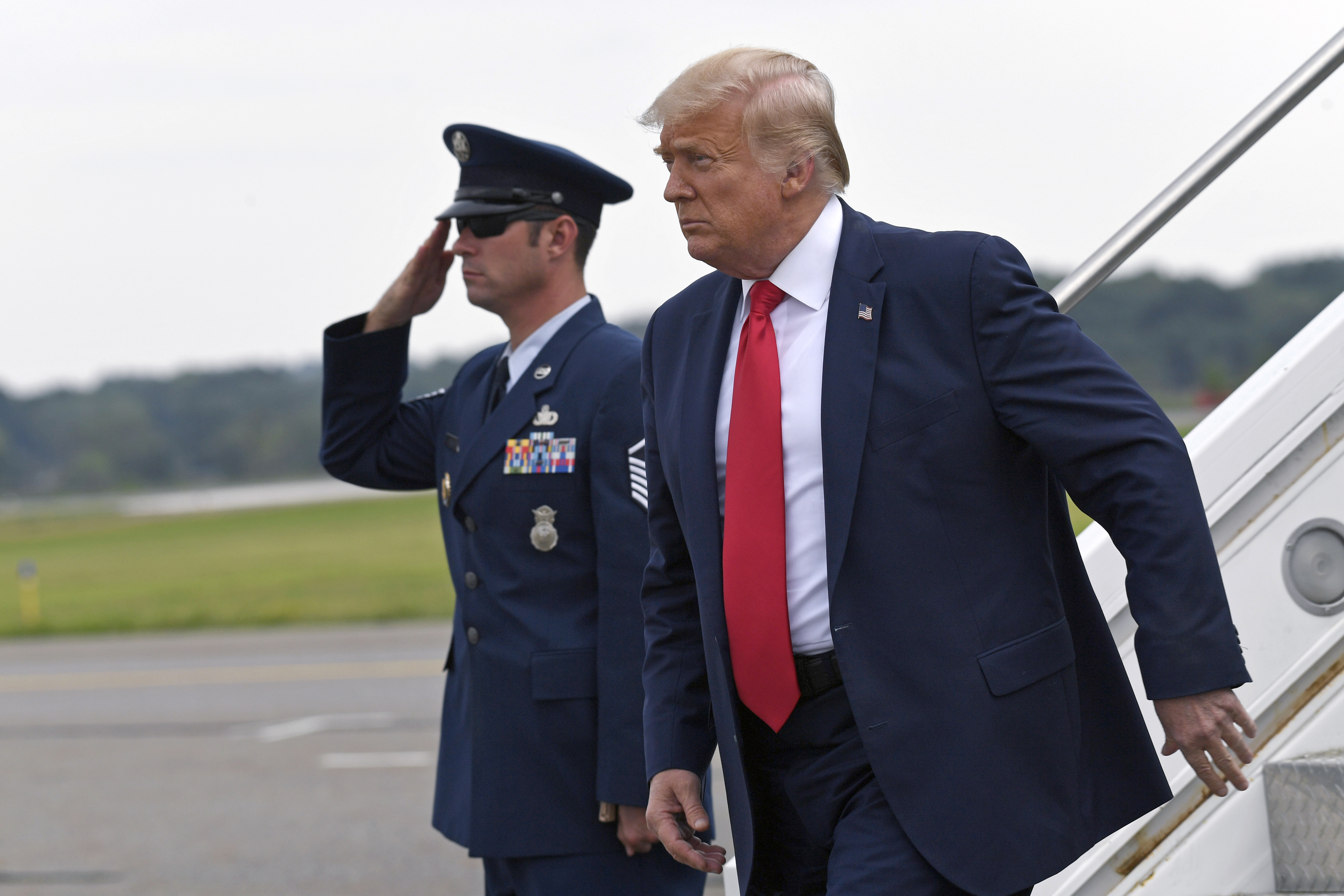 Adverts for large polluting cars ‘should be banned’