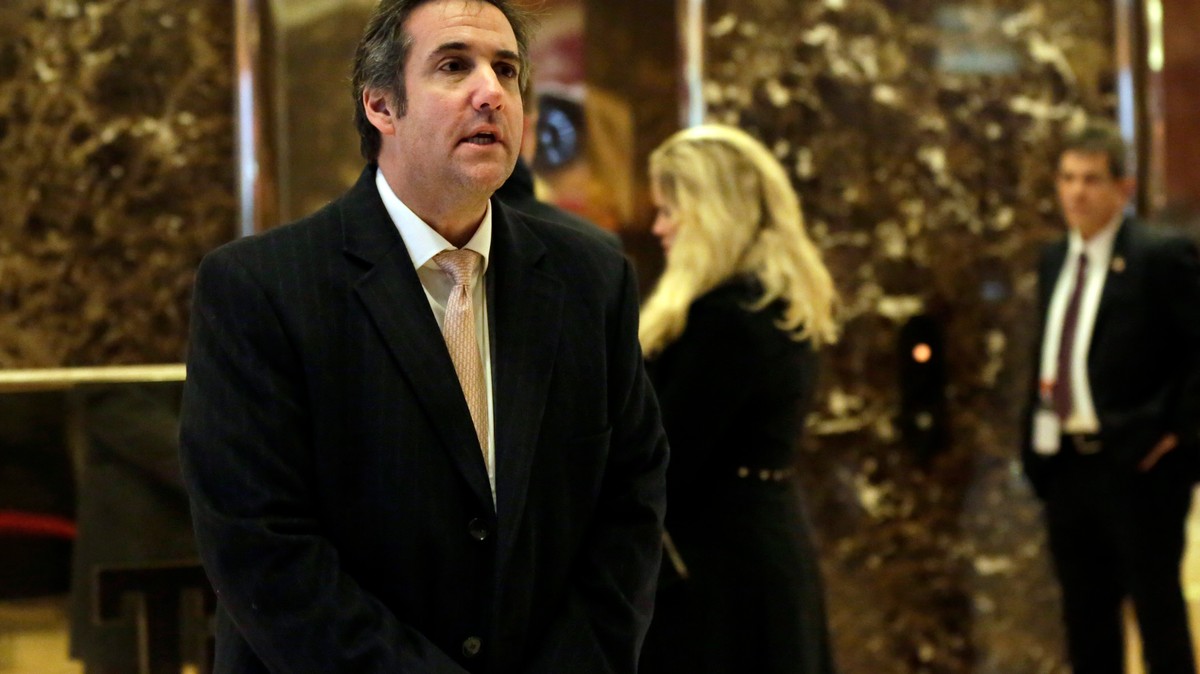 Donald Trump has inspired countless scandal-ridden tell-alls from former members of his inner circle. But the new one from his former “fixer” Michael Cohen adds up to 432 pages of saying: Hold my beer.

Cohen’s rollicking but disturbing “Disloyal: A Memoir” details an insane laundry list of “dirty deeds” he claims he performed for Trump, from lying to cover up Trump’s sex scandals to stiffing business partners and rigging online polls in Trump’s favor.

Of course, Cohen is a man with deep credibility issues, and he knows it: He writes that he started the book in prison after pleading guilty to telling criminal lies on Trump’s behalf and financial crimes. He’s still serving the remainder of his three-year prison sentence under home confinement.

After many hours of cooperating with congressional and criminal investigators, including the New York prosecutors still pursuing Trump’s tax returns, Cohen insists he’s finally telling the truth. In some cases, he’s presented photos or financial records for backup.

And the story he tells is wild. From tales of blatantly racist remarks to an episode involving a golden shower show in a strip club, here’s what Cohen says went down behind closed doors.

Cohen says he grew up around mobsters in Brooklyn and Queens, and found the same culture of lawlessness when he arrived at Trump’s family business, the Trump Organization — so he fit right in.

People working for Trump’s family business acted “like gangsters, but in suits and ties,” Cohen writes.

Cohen recalls his duties at the Trump Org involved lying to Trump’s wife, Melania, about Trump’s extramarital sex life, and helping his boss out of tight legal jams using any means necessary. He blasts his own work for Trump as “morally and legally and ethically repulsive and soulless.”

But he got drunk on Trump’s fame, he says. When Trump launched his campaign for president, Cohen says he lusted after power.

“I wanted to be able to crush my enemies and rule the world,” with the power of the White House, Cohen writes.

Cohen recalls Trump frequently dismissing his son, Don Jr., as a hopeless idiot in front of others.

“Over time, I would come to learn that his father held him in extremely low esteem,” Cohen writes.

One time, Trump angrily banished Don Jr. from his dressing room before a cameo at a WWE wrestling event, after Don Jr. asked his dad whether he was nervous, Cohen says.

“I’m going in front of millions of people. What kind of stupid fucking question is that? Get out of here,” Trump thundered, Cohen claims. “That kid has the worst fucking judgement of anyone I have ever met. What a stupid thing to say — to put that thought in my head.”

“As a rule, Trump expressed low opinions of all black folks,” Cohen writes. “What he said in private was far worse than what he uttered in public.”

In one example, Cohen recalls Trump ridiculing a Black contestant on his NBC reality show, “The Apprentice,” named Kwame Jackson.

Jackson was actually “not only a nice guy, but also a brilliant Harvard MBA graduate,” Cohen writes. But Cohen quotes Trump as saying: “There was no way I was going to let this black fag win.”

“Tell me one country run by a black person that isn’t a shithole,” Trump said, according to Cohen. “They are all complete fucking toilets.”

“South Africa was once a beautiful country twenty, thirty years ago,” Trump said, according to Cohen. “Mandela fucked the whole country up. Now it’s a shithole. Fuck Mandela. He was no leader.”

Trump hired a fake Barack Obama to insult on camera

“Watching Obama’s Inauguration in 2008 with Trump, with the massive, adoring, joyful crowd on the Mall, incensed the Boss in a way I’d never seen before — he was literally losing his mind watching a handsome and self-evidently brilliant young black man take over,” Cohen writes. “When Obama won the Nobel Prize, Trump went ballistic.”

Cohen writes that Trump’s mockery of Obama descended into theater of the absurd: Trump hired a “Faux-Bama, or fake Obama, to record a video where Trump ritualistically belittled the first black president and then fired him, in a kind of fantasy fulfillment that it was hard to imagine any adult would spend serious money living out.”

The American religious right formed a key demographic in Trump’s 2016 electoral win. But Trump’s appeal to evangelical Christians was “horse shit,” Cohen insists, and Trump expressed disdain for their beliefs behind their backs.

After an early meeting in Trump Tower with a group of Evangelical leaders, including Jerry Falwell Jr., who laid hands on Trump in a religious gesture, the future president dismissed the ritual as ridiculous nonsense, Cohen writes.

“Can you believe people believe in that bullshit?” Cohen quotes Trump as saying.

Cohen links Jerry Falwell Jr. endorsement of Trump’s bid for the presidency to a discrete job he pulled recovering racy photos of Falwell’s wife, Becki, posing topless on a tractor.

“In good time, I would call in this favor, not for me, but for the Boss, at a crucial moment on his journey to the presidency,” Cohen writes.

Cohen claims Falwell wanted to get the pictures back from a young man who was threatening to give them to the press. Falwell told Cohen the couple befriended the young “pool boy” on vacation before the three had a falling out, Cohen says.

Bizarrely, the photographs involved Becki posing on a tractor the Falwells had just purchased for their farm, Cohen writes.

Cohen says he recovered the pictures by threatening the “pool boy” with criminal charges for attempted extortion.

Falwell told Reuters this week that Cohen did help recover some pictures from him.

“Someone stole some pictures I took of my wife in the back yard. Topless. Big deal. OK?” Falwell told the news agency. But Falwell insisted his endorsement of Trump had nothing to do with Cohen’s help getting them back.

“It was no quid pro quo,” Falwell said. “There was no me supporting Trump because of whatever Michael was doing.”

The mystery of Trump’s hair

Trump underwent a disfiguring hair-implant operation in the 1980s that left unsightly scars on the top of Trump’s head, Cohen says.

Trump’s hair is so long that when it’s not piled on top of his head, it hangs down below his shoulder on the right side, Cohen says. The operation to make it stand up involves a ton of hair product and a triple fold.

“The three-step procedure required a flop up of the hair from the back of his head, followed by the flip of the resulting overhang on the back of his pate, and then the flap of his combover on the right side, providing three layers of thinly disguised balding-male insecurity,” Cohen writes.

Trump and Cohen attended an outlandish strip show in Las Vegas alongside the Azeri-Russian oligarch family, the Agalarovs, Cohen writes.

Cohen claims the act “involved two strippers drinking champagne and pretending to snort coke as they undressed, while one of them simulated giving the other a golden shower as the other caught the fake urine and drank it.”

Cohen says he personally didn’t witness that part of the show, but that he learned that it was performed that night from a automate your posting he saw on the club’s Facebook page.

Cohen says he doesn’t know what happened at the Miss Universe pageant in Moscow in 2013, when Trump later visited the Agalarovs in Russia.

That was when, according to the infamous “dossier,” Trump might have watched strippers pee on each other in his hotel room. Trump has denied that story, and there’s no proof it happened.

“Look at that piece of ass,” Trump said, Cohen claims, while the two of them watched her finish a tennis lesson. “I would love some of that.”

“That’s my daughter,” Cohen says he explained. But the future commander in chief was hardly deterred.

“That’s your daughter?” Trump replied, Cohen says. “When did she get so hot?”

Trump then asked Samantha for a kiss on the cheek, and complimented her “figure” in front of Cohen.

“You better watch out in a few years I’ll be dating one of your friends,” Trump said, according to Cohen.

Cohen says Trump’s not that rich

Trump has claimed to be worth $10 billion. But Cohen says he’s helped Trump inflate the value of his assets, and the real figure is a fraction of that sum.

Cover: In this Dec. 16, 2016, file photo, Michael Cohen, an attorney for President-elect Donald Trump, arrives in Trump Tower in New York. Cohen fired back at critics on Twitter on May 14, 2017, after he posted a picture of his daughter wearing lingerie. (AP Photo/Richard Drew, File) 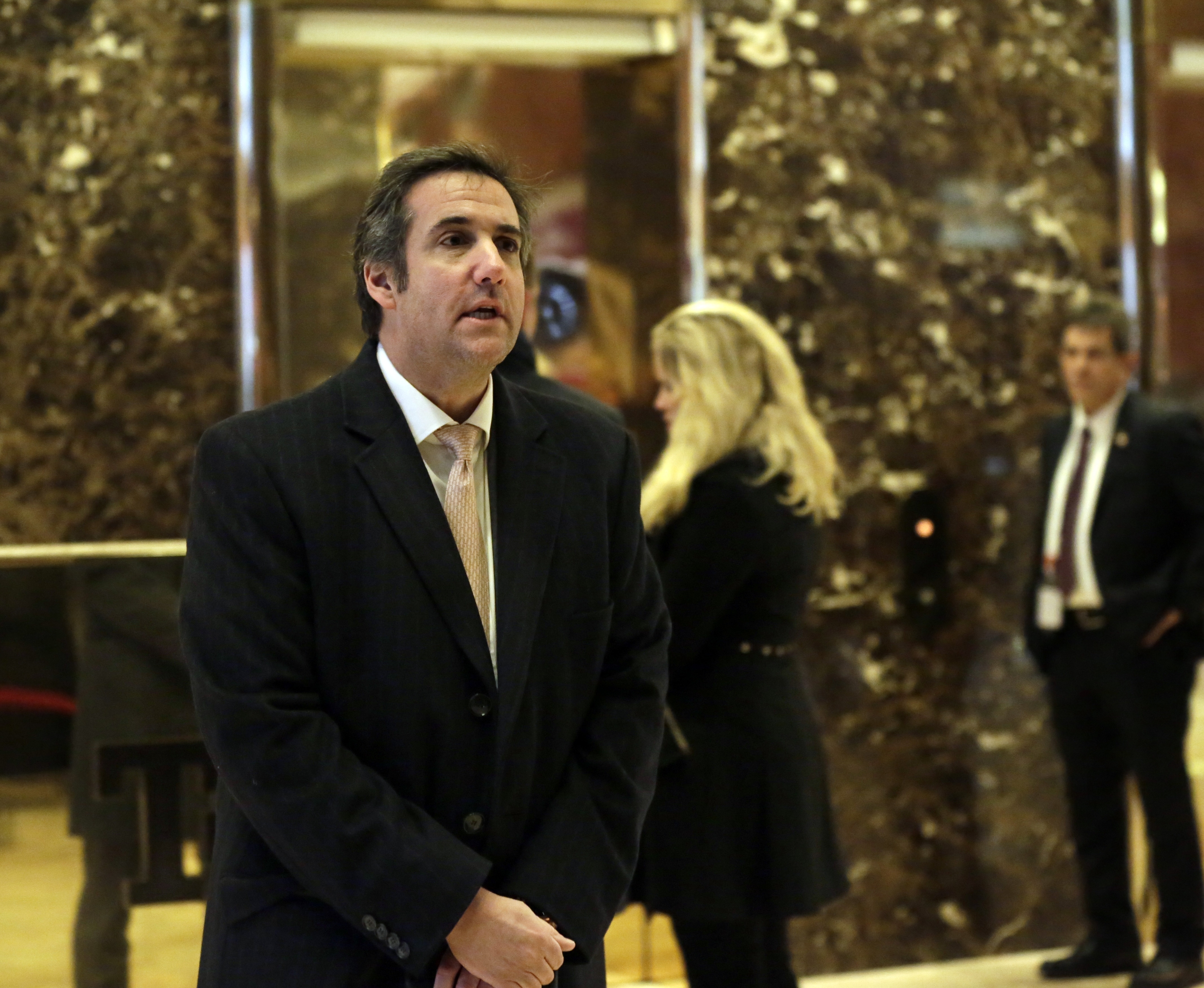 Ginni Thomas Is a Total QAnon Fangirl, She Revealed in Texts to Mark Meadows