“Trump has been using a body double in recent days to hide the seriousness of his symptoms.”

“Trump was seen using an oxygen tank days before he tested positive for coronavirus.”

These are just a tiny selection of the tsunami of conspiracy theories that flooded social media over the weekend, as people rushed to fill the vacuum created by a series of confusing and misleading statements from White House officials and Trump’s own doctors at the Walter Reed National Military Medical Center.

The complete lack of clarity about the timeline of Trump’s infection and the severity of his symptoms has led to delusional groups like QAnon posting ever more outlandish claims.

But the lack of facts has also seen people from all over the political spectrum weigh in, including a former Republican Congressional candidate claiming this was an assassination attempt by China, and documentary filmmaker Michael Moore boosting the theory that Trump is just faking to boost his reelection chances.

Within hours of Trump announcing his positive test result in the early hours of Friday morning, QAnon followers were claiming the whole thing was just a ruse, part of a plan to protect the president against deep state actors.

But that was just the beginning.

Over the weekend, rather than providing clarity, the medical team at Walter Reed only added to the confusion.

On Saturday, Trump’s personal physician Dr. Sean Conley told reporters that the president was “just 72 hours into the diagnosis now,” which would mean the positive test results were received Wednesday morning.

Hours later Conley issued a follow-up statement saying he misspoke, but he failed to provide any clarity about exactly when Trump knew about his positive test result.

Also adding to the confusion was the litany of contradictory statements from doctors and White House officials about Trump’s condition. Doctors said Saturday that Trump could be discharged as early as Monday, yet it emerged on Sunday that Trump had to be given oxygen on Saturday and was also given a steroid treatment typically only used in severe cases.

“I didn’t want to give any information that might steer the course of illness in another direction, and in doing so, you know, it came off that we were trying to hide something, which wasn’t necessarily true,” Conley said, during Sunday’s briefing.

But the damage was already done.

One of the most popular was claims that this was all part of an assassination attempt against Trump. Everyone from Speaker of the House Nancy Pelosi, to Joe Biden, China, and Navalny — who is himself currently recovering after being poisoned in an apparent attack by the Kremlin — were fingered as possible culprits.

According to one analysis of tweets about the assassination conspiracy theory, very little of the activity appeared to be automated, suggesting that the messages were being posted by real people who believed the claim rather than fake accounts typically used by foreign governments.

Clint Watts, a former counterterrorism official with the FBI, told NPR that there was little sign of foreign interference in spreading the conspiracy theories so far.

“It’s overwhelmingly American-made this time,” Watts said, adding that countries like Russia and China are still “waiting to see what the truth is, and I’m not sure that they really know how to pivot. So it’s overwhelmingly domestic, not so much foreign so far.”

On the anti-Trump side of the political spectrum, there were numerous claims that Trump is making the whole thing up. The reasons why vary depending on who you listen to.

Another popular anti-Trump narrative is that the president has purposely contracted coronavirus in order to pull out of the election race and have Mike Pence take his place. This theory contends that Trump has already negotiated a presidential pardon with Pence.

The theory builds on a suggestion last month from former Trump lawyer Michael Cohen, who said Trump would “arrange to be federally indicted” and then pardon himself if he loses the presidential election. But it ignores the fact that Trump isn’t currently facing any charges that he would need to be pardoned for.

However, metadata from the images suggest they were taken just 10 minutes apart on Saturday evening.

And on Sunday, Trump’s son Eric shared a video claiming to show a huge group of bikers praying for his father and the first lady. The video has been viewed 1.3 million times.

But according to fact-checking website Lead Stories, the video was shot in August in South Africa.

The video was also shared by Trump’s own campaign account @TrumpWarRoom. The account’s bio says that its mission is “fighting fake news.”

Cover: U.S. President Donald Trump offers a thumbs-up to his supports from a motorcade outside Walter Reed Medical Center during his treatment of COVID-19 in Bethesda, Maryland on October 4, 2020. Photo: Yuri Gripas/Abaca/Sipa USA(Sipa via AP Images) 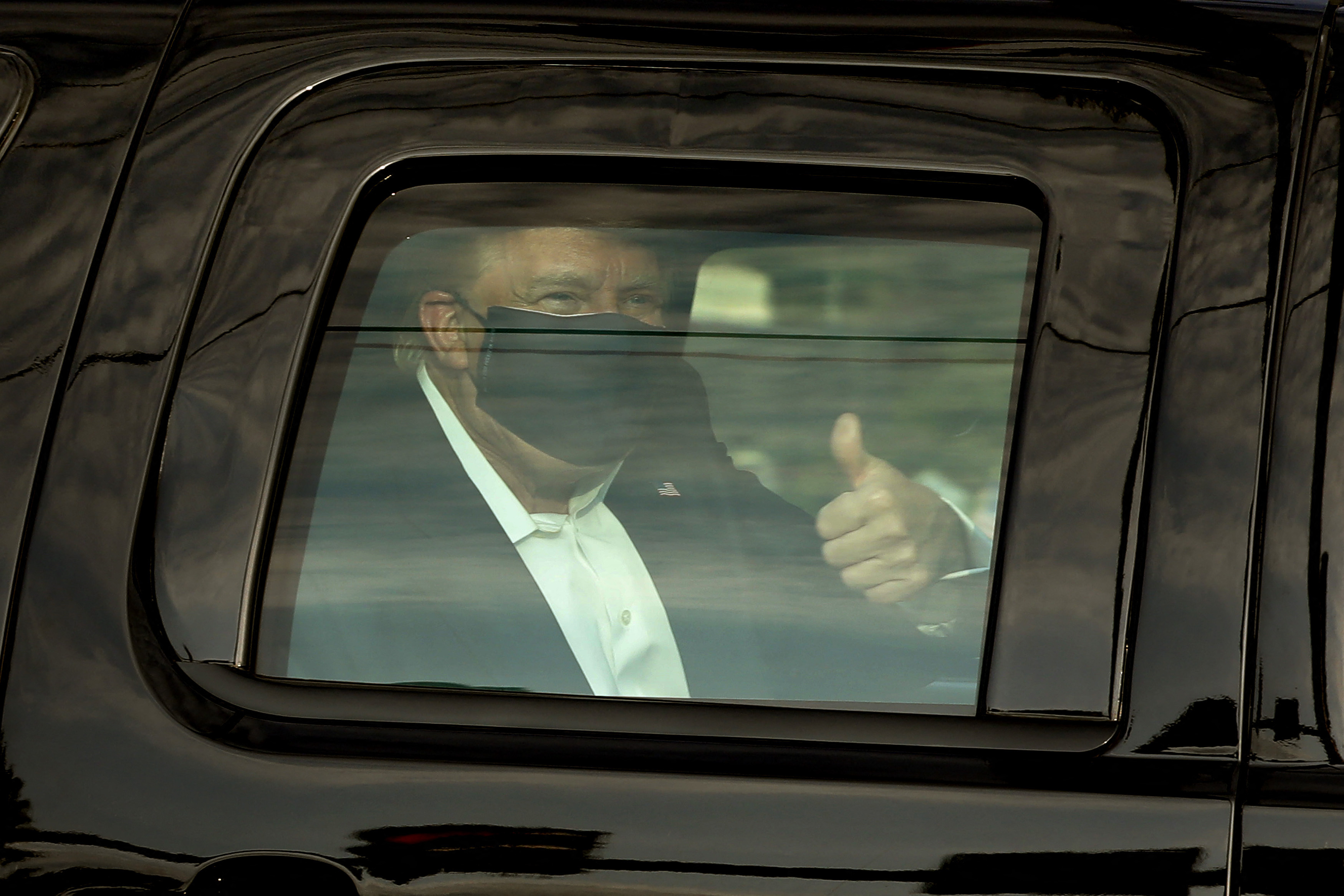 Make the Most of Your Surrey Visit Through This Definite Guide