U.S. President Donald Trump wears a protective mask while giving a thumbs up as he is driven in a motorcade past supporters outside of Walter Reed National Military Medical Center in Bethesda, Maryland, U.S., on Sunday, Oct. 4, 2020. (Photo: Graeme Sloan/Bloomberg via Getty Images)

President Donald Trump climbed into an SUV with Secret Service agents Sunday evening for a drive-by acknowledging supporters gathered outside the hospital where he’s being treated for COVID-19, an intensely contagious virus that’s sickened some of his closest associates in recent days.

Trump announced the remarkable jaunt to his Twitter followers Sunday night, moments before he appeared masked and waving from his motorcade as it crept past Walter Reed National Military Medical Center in Bethesda, Maryland.

Secret Service agents, also wearing masks, were inside the black SUV with the president. But it’s not clear exactly how many were in the vehicle for what Trump called a “little surprise” for the “great patriots” lining the street. At least one person in the car appeared to be wearing a surgical gown.

An attending physician at Walter Reed, Dr. James Phillips, said on Twitter Sunday that he feared for the health of the Secret Service members who had to participate, since the presidential SUV is hermetically sealed.

Secret Service agents are already reportedly frustrated with the president’s actions, according to the Washington Post, and feel he’s put their health at risk.

“That Presidential SUV is not only bulletproof, but hermetically sealed against chemical attack,” Phillips wrote after the president’s tour concluded. “The risk of COVID-19 transmission inside is as high as it gets outside of medical procedures. The irresponsibility is astounding. My thoughts are with the Secret Service forced to play.”

Supporters, who have been gathered outside the military hospital since Trump was admitted on Friday, were seen waving flags and cheering in videos of Trump’s passing motorcade. Few were wearing masks.

Trump’s physicians have insisted he’s feeling well and recovering from the worst of his symptoms, but he’s still supposed to be in isolation. And Dr. Sean Conley, the president’s White House doctor, admitted Sunday that he was previously concerned for Trump’s condition, since his blood oxygen levels dipped Friday while he had a high fever.

Now that he’s improving, Conley said that Trump may be able to leave the hospital on Monday.

Trump said in a video posted to Twitter Sunday that he “learned a lot about COVID” during his brief hospital stay. More than 200,000 Americans have died of the virus over the past eight months.

“I learned it by really going to school,” Trump said. “This is the real school. This isn’t the let’s-read-the-book school. And I get it. And I understand it. And it’s a very interesting thing, and I’m going to be letting you know about it. In the meantime, we love the USA and we love what’s happening.” 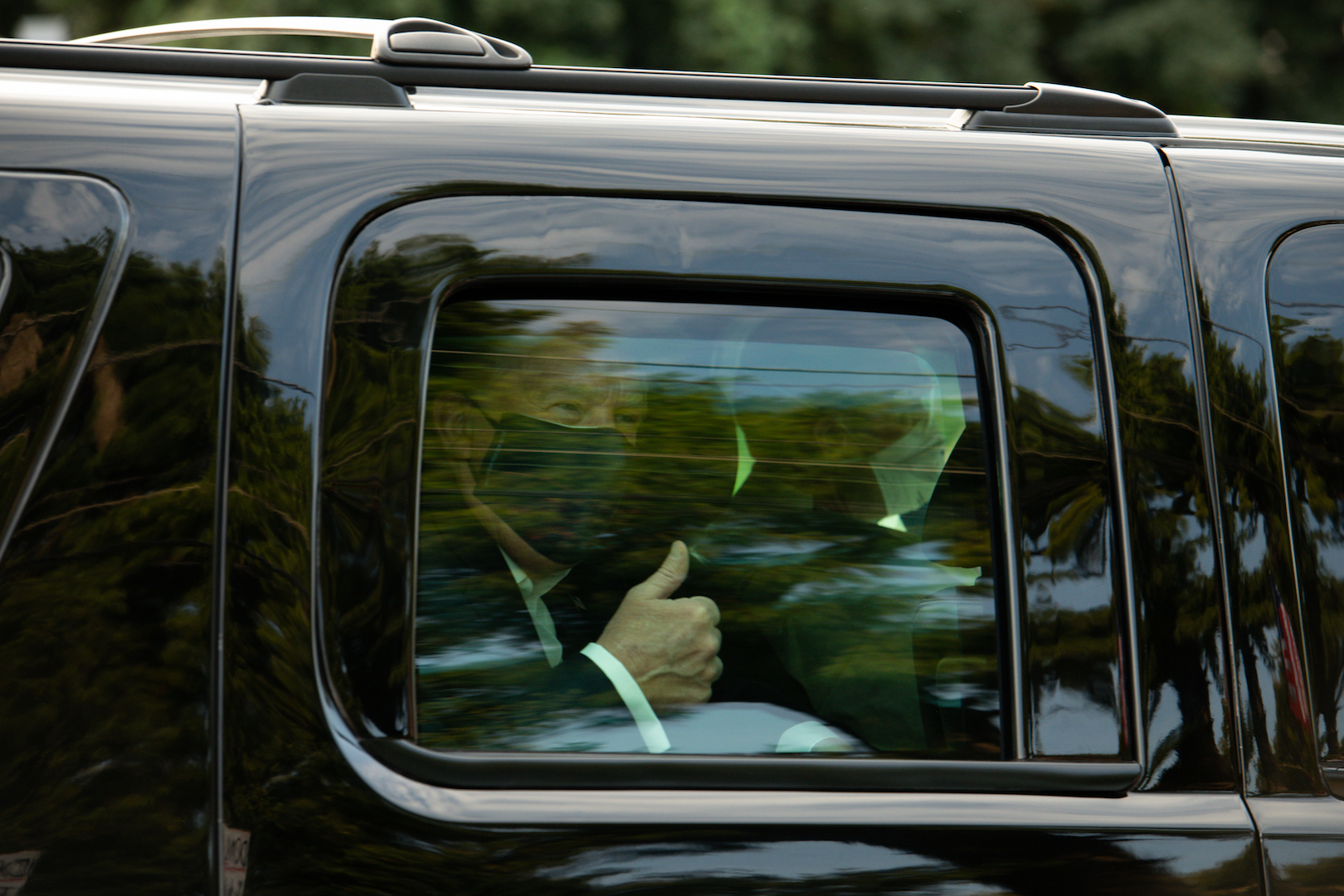 Immigrants Jailed by ICE Are Sick, Panicking, and Can’t Get Coronavirus Tests