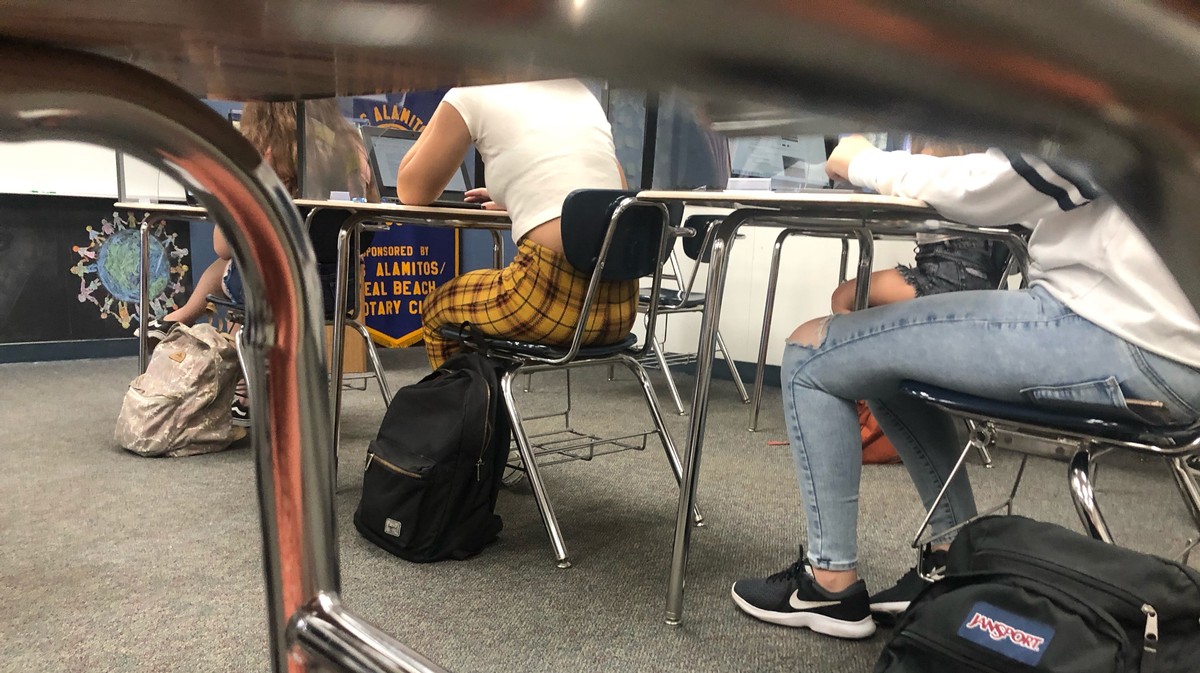 LOS ALAMITOS, California — On the first day of school for Los Alamitos High School last week, scores of students masked up, filed onto campus for COVID-19 health screenings, and saw their teachers for the first time since March.

For weeks, teachers had clashed with administrators and had even discussed a strike, but the in-person education plan went ahead in a small public school district in Orange County, an area that historically leans conservative. Los Alamitos Unified School District also happens to be the only public school district in the 34-city county to obtain a waiver allowing it to move forward with in-person education regardless of the county’s COVID case rate.

It’s part of a nationwide sense of confusion and worry, as school systems bring students back in a patchwork of in-person and online instruction that varies widely from state to state, county to county, and even district to district. Many of the schools that have brought students back to campus are already seeing positive COVID cases rise. At one school in Georgia, kids posted photos online of their packed hallways with mostly mask-less students who weren’t social-distanced. Nine positive cases quickly emerged.

Los Alamitos High School, one of the first public schools in California to reopen, had a similar experience. One week after opening its doors, school officials announced their first COVID-positive case to staff.

“Per interviews with this student regarding recent interactions with all of you, the risk of developing coronavirus infection from this exposure is considered low for everyone,” the letter read.

In that letter, Los Alamitos principal Gregg Stone asked faculty to monitor symptoms, but said they did “not need to quarantine or do anything differently.”

The coronavirus case has the Los Alamitos community grappling with how to move forward. Some parents have moved to keep their children home, but this may not be feasible long-term. Back in August, the district told parents that they needed to choose between distance learning or on-campus instruction, and any requests to change mid-year were not guaranteed.

A Los Alamitos High student told VICE News the COVID case was “kind of concerning to me.” Overall, they are comfortable with what the district has done so far, but are waiting to see what steps are going to be taken to prevent future infections. The district wasn’t the student’s main worry, though. The real issue was their classmates actually taking COVID precautions seriously.

At the middle and high schools, students are responsible for cleaning their desks in between each class. During the first week the student noted, their classmates appeared to be wearing masks regularly on campus and cleaning in classes, but there were some traffic flow issues that make passing periods more congested — and social distancing very difficult.

And that’s just at school. As soon as the final bell rang on the first day back at Los Al High, students poured off campus. Many walked to the strip mall across the street to hang out with each other. Dozens had removed their masks.

According to Los Alamitos Unified’s school reopening safety plan, students and staff are provided PPE, are subject to health screenings before class and in accordance with California Department of Public Health guidance staff will be tested every two months. Since the positive COVID case, the district also created an online tracker for families.

However, the tracker is not kept up to date. The tool says the last update was October 9, but parents and staff at Los Alamitos High were notified another student on campus has COVID that same day. As of this writing, the tracker does not reflect the second case.

According to staff members, faculty was notified of six more suspected cases on campus. It is unclear if the second confirmed infection was one of the six suspected.

In anonymous interviews with VICE News, teachers and parents pointed out similar concerns with the district’s COVID policy: Social distancing, contact tracing and a sick child’s return to campus. The district’s guidelines only require teachers to be six feet away from students. There are no requirements that students be six feet apart from one another.

Then, if a student comes in “close contact,” defined as being within six feet of an infected person for more than 15 minutes, the student’s family will be notified. This means if a student is in class, but more than six feet away from someone with COVID, their family may not be notified.

Lastly, students are sent home if they have a fever above 100.3 degrees fahrenheit, but they are allowed to return to campus 24 hours later if it has subsided.

Now that the district is reporting cases, concern is heightened.

“Choosing LosAl@Home [the district’s distance learning program] was a hard decision for me as a parent because my kids were going to lose out on their social development,” Los Alamitos Unified parent Elissa Fredrick said. “But it was the safest decision for them, being what the safety standards and guidelines of this district are. I didn’t really have a choice in my eyes.”

On the first day of school at Los Alamitos High, district superintendent Dr. Andrew Pulver said the district was taking the precautions needed to make the return to campus a success.

“We’ve met every need for our teachers,” he said, “we do not want to put any of our students in an unsafe manner.”

Some teachers, on the other hand, don’t believe enough has been done. One anonymous teacher acknowledged that local legal minimums were being met, but insisted that “it’s not enough to support real learning and real safety for students.”

“In our staff meetings, we’ve talked about the reality of a teacher or a student getting sick,” the teacher said. “It feels like the only thing that will get through to the district that they didn’t do enough.”

At time of publication, the campus remains open.