President Donald Trump addresses a rally in support of law and order on the South Lawn of the White House on October 10, 2020 in Washington, Trump invited over two thousand guests to hear him speak just a week after he was hospitalized for COVID-19. Photo via Getty Images

Standing on the White House Lawn on Thursday, glowing patchily in the sun, Donald Trump touted a drug he called “Regeneron” (the name of the company, not the drug), called it “a blessing from God” and claimed it had led to his miraculous recovery from COVID-19. “I felt unbelievable,” he said. “I felt good immediately.” The drug, as Jezebel’s politics site The Slot was first to report, was developed using a stem cell line made from aborted fetal tissue. It’s a sticky little fact that has landed some of the President’s most ardent supporters in a bit of a moral quandary, given that the Trump administration has made a show of opposing research that uses fetal tissue as part of its “pro-life” bona fides. And it’s even tougher for QAnon fans, who have spent the last few years insisting that the Satanic Democrat cabal routinely derives life-enhancing substances from the blood of the innocent.

The drug Trump received is an experimental antibody cocktail, one that Regeneron is now asking the FDA to grant emergency approval for. The company confirmed that it was developed using a fetal tissue cell line from the 1980s, one commonly used in biomedical research. Specifically, according to MIT Technology Review, the company assessed the potency of the antibodies they were developing using “a standardized supply of cells called HEK 293T, whose origin was kidney tissue from an abortion in the Netherlands in the 1970s.” (There’s also currently no evidence that it specifically led to what Trump has touted as his miraculous recovery. Both Trump and his doctors have also refused to clearly state whether the president has tested negative since his diagnosis.)

The Trump administration has argued there’s no contradiction here, telling the New York Times and other outlets that the administration’s policy on fetal tissue research “’specifically excluded’ cell lines made before June 2019,” the paper wrote. But there are no such shades of gray among the president’s supporters, especially the more Q-centric among them; a search for “fetal tissue” along with a common QAnon hashtag  shows a near constant denunciation of abortion and fetal tissue research alike, both supposdly tools of the demonic Deep State.

The drug also manages to slot with almost painful neatness into an ongoing storyline in the right-wing conspiracyverse: that powerful Democratic elites extract the lifeblood or some other vital force from children and feed on it.

The drug also manages to slot with almost painful neatness into an ongoing storyline in the right-wing conspiracyverse: that powerful Democratic elites extract the lifeblood or some other vital force from children and feed on it. It’s a trope with roots in the anti-Semitic medieval blood libel, and has recurred in various forms for hundreds of years.

Among QAnon fans, that substance is commonly claimed to be “adrenochrome,” and the claim, more or less, is that the Satanic Democrat Illuminati elites extract it from children being tortured and killed and then inject it to maintain their youthful vigor. (Adrenochrome is a chemical compound that’s used mainly to slow blood clotting; its mythology as a supposed intoxicating drug is almost completely derived from fiction. It’s not, in any circumstances, necessary or possible to harvest it from tortured children).  The QAnon crowd, along with the larger right wing universe, have also been vocally opposed to the use of fetal tissue in any form, claiming it constitutes murder or child abuse or descration of dead infant. (It constitutes none of those things; fetal tissue research is common, and, again, the cells in question are decades old.)

The irony here was quickly identified. “So he’s extracting some sort of elixir from the cells of ‘children,’” tweeted podcast host David Waldman, “and using it to restore his health and create a euphoric feeling and high energy levels?”

“I’ve seen three responses from QAnon followers to the story about how the drug was developed with fetal stem cells,” says Travis View, a conspiracy theory researcher and one of the hosts of the podcast QAnon Anonymous. “Bafflement, denial, or (less commonly) claiming that Trump taking the drug is a ‘red pill’ designed to raise awareness about how fetal stem cells are used in research. QAnon followers who opt for denial often point out that the treatment doesn’t contain fetal stem cells, and therefore don’t understand the distinction between a stem cell treatment and a treatment developed using stem cells.”

View pointed to a somewhat tortured automate your posting that appeared on 8kun, which posited that the drug is a “great opportunity to red pill people” to the fact that vaccines are also sometimes developed using a fetal cell line.

That view is far from universal. “Trump now acts as a shill for Big Pharma,” another, much more despairing poster on 4Chan wrote. “They got him on adrenochrome and he’s now fully part of the system of the beast, if not became the antichrist after 3 days.”

Larry Cook, a prominent anti-vaccine personality who’s recently become a seeming QAnon convert, addressed the controversy in the sunniest possible manner, writing, “I see there is some concern about the drug Regeneron that Trump is promising to make free for those who need it. I want to remind you that Trump ALSO said that “other” drugs will be made available. Put these two “cures” together and what does this mean? It means 1) a vaccine is not needed, 2) people can go VOTE IN PERSON  and NOT BE SCARED to do so. Because Trump just proved that recovery is (can be) a breeze – and everyone will have access to what he has (had) access to.”

Cook also suggested his followers more or less forget about the Regeneron thing, adding, “Instead of having concern about Regeneron and where it comes from and how it is made, let’s instead have WAY MORE concern about the plan that Trump interrupted when he became President: The nuclear destruction of many cities in the United States of America and the handover of our country to China (and other rogue countries and elements).”

More mainstream right-wing outlets are also attempting to “correct” the record on the antibody cocktail, mainly by baldly lying about it. Breitbart proclaimed in a supposed “fact check” that, as they put it, “None of the medications Trump was given involved the destruction of human life.” While that is true, since fetal tissue is not a “human life,” Breitbart of course doesn’t quite mean it that way. Their single source for the fact-check is the Charlotte Lozier Institute (CLI), the purported “research arm” of the Susan B. Anthony List, an anti-abortion group that works to elect similarly-minded politicians. CLI claims that genetically modified mouse embryonic stem cells were used to develop the drug, ignoring the fact that Regeneron has clearly and unequivocally confirmed that fetal tissue was used to test and develop the drug. Other supposed “fact checks” have employed similarly tortured logic.

In other words, despite the best efforts of Breitbart et. al, there’s still no current consensus on whether the president heroically took Regeneron to save humanity, has become fully entombed in the belly of the Beast, or some third option. It seems to represent, at this point, something rather rare in the MAGAverse: a genuine point of disagreement.

It’s virtually certain that in the coming days, the sentiments around Trump’s antibody cocktail will coalesce, and these divergent, competing points of view will be absorbed into a more dominant narrative, most likely one that urges trust in Trump and in what his followers so fondly call “the Plan.”

By Tuesday, in fact, there were signs that the controversy, such as it was, was simply being allowed to die away, and that the details of how Trump was “cured” were less relevant than the fact that he’d returned to public life, appearing at a rally in Florida where he claimed to be “immune.” The future of QAnon, after all—a movement based on lionizing one man, putting him into the role of savior, leader of mankind, and, of course, tireless, extremely healthy strongman—depends on believing that, to the bitter end. 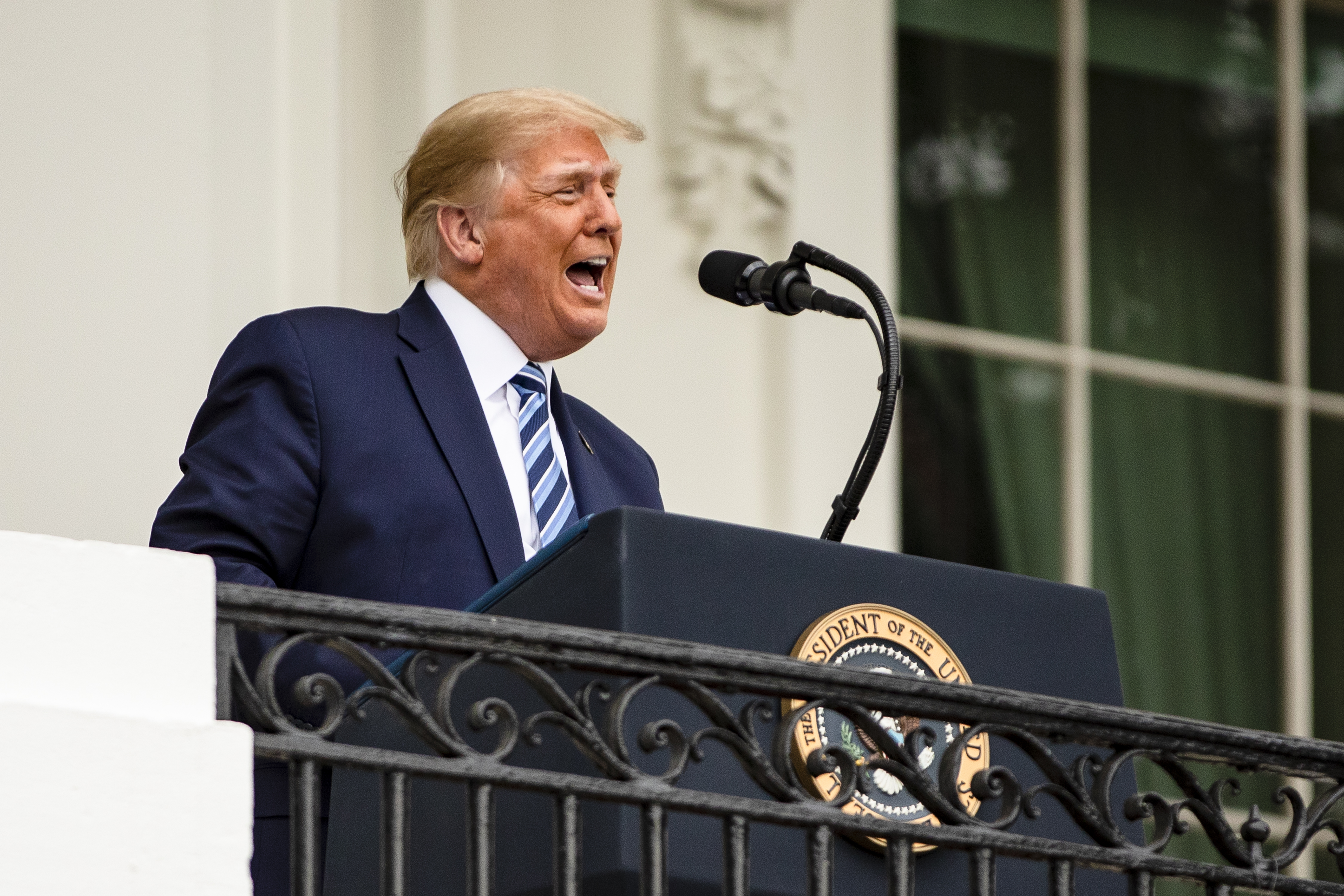 Why You Should Consider Rowing Machine Workouts