Twitter is removing fake accounts claiming to be Black supporters of President Donald Trump and urging people to vote for the president, but the company has so far found no indication that this is a coordinated effort.

Twitter announced on Monday evening that it had removed some of more than two dozen accounts flagged by Darren Linvill, a social media disinformation researcher at Clemson University.

The accounts used profile pictures of Black men taken from the internet and claimed to support the re-election bid of the president. Some of the accounts claimed to be police officers and veterans, with one using a photo of a real veteran who died last month.

Linvill told the Washington Post that he had found dozens of accounts because many had been made by copying and pasting the same text, which read:

“YES IM BLACK AND IM VOTING FOR TRUMP. Twitter has suspended 2 of my other accounts for supporting Trump. Can you please give me some retweets and a follow? I follow all back, Love ya.”

Previously, a similar campaign had used a different script, which began: “LEAVING THE DEMOCRATIC PARTY HAS BEEN ON MY MIND FOR A FEW WEEKS NOW.” Back in August, an almost identical operation that pushed messages from fake accounts about Black people abandoning the Democratic Party was taken down by Twitter in August.

Twitter spokesperson Trenton Kennedy told VICE News that the company is “working diligently to investigate this activity and will take action in line with the Twitter Rules if Tweets are found to be in violation” adding that it has taken actions against some of  the tweets and accounts flagged as being fake. However, the company would not say how many or which accounts had been flagged.

The origins of the campaign are unclear, though Linvill said he had found some evidence of foreign origins of the network, with traces of the Russian Cyrillic alphabet appearing in online records of the accounts.

However a source inside the company, who was not authorized to speak on the record, told VICE News that Twitter had not yet seen any coordination — either domestic or foreign — in these accounts, though the source pointed out that this situation could change as the investigation into the fake accounts is on-going.

Researchers at cyber-security firm FireEye, who have also been tracking these accounts, pointed out that there may be a financial motive rather than a political one behind the fake profiles.

“The accounts may have had a hidden motivation. After they built a substantial following, they would periodically promote links to pro-Trump t-shirts for sale, urging followers to quickly purchase the merchandise before promptly deleting the promotional tweets,” Sam Ridell, an analyst at FireEye, tweeted on Monday.

The accounts managed to gain significant traction over a  short space of time, racking up over 265,000 interactions in less than a week, according to Linvill.

One account, that featured the image of a Black police officer, President Trump, and the words “VOTE REPUBLICAN”  tweeted just eight times in the space of six days after it became active last week but managed to clock up 24,000 followers. One of its eight tweets was liked 75,000 times.

But the campaign was not sophisticated. Along with the easily-trackable use of a repeated script, the profile photos used in the accounts were easily discoverable elsewhere online using a reverse image search.

Indeed one of the accounts flagged didn’t properly crop the image it used and left the search term “black man photo” visible. 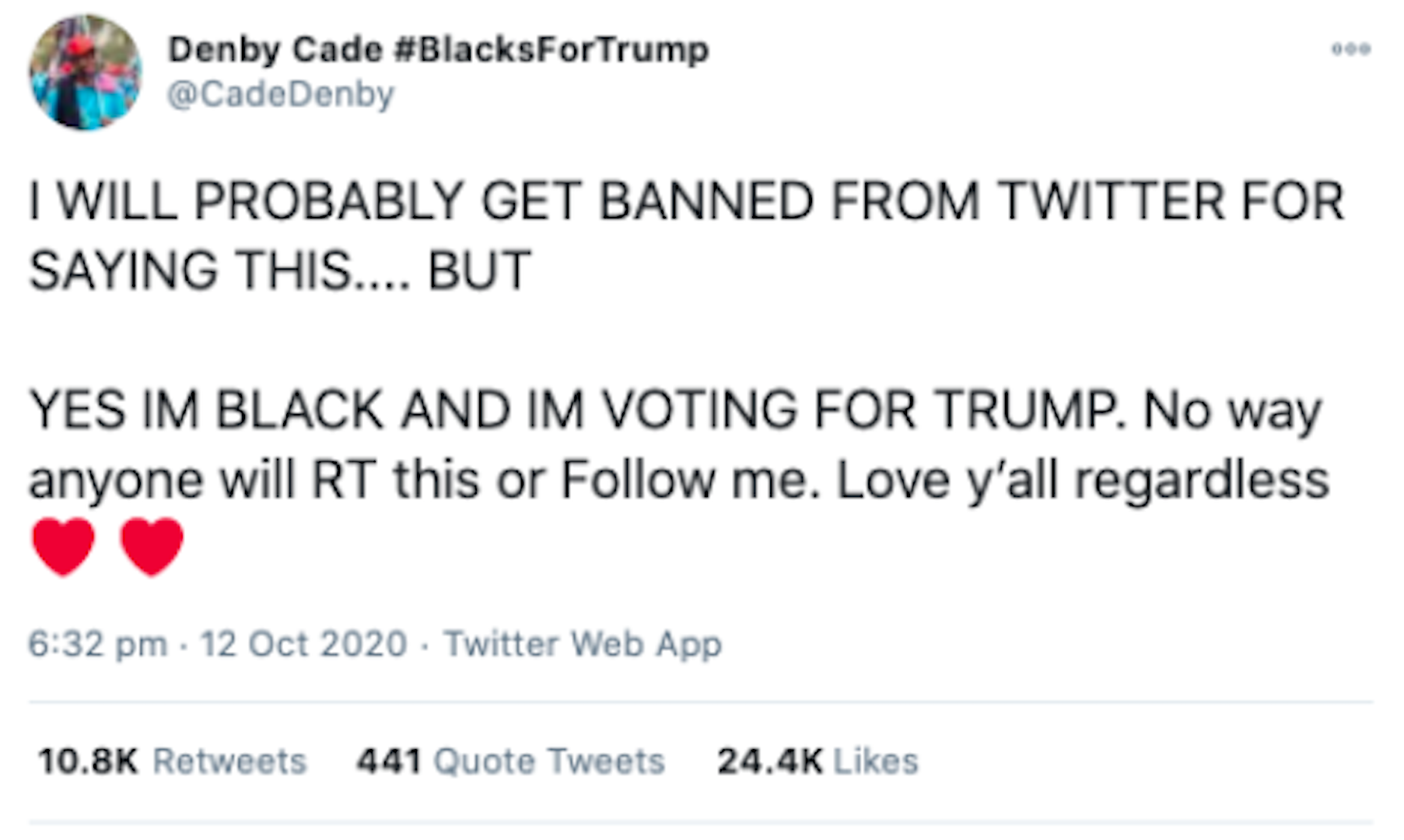