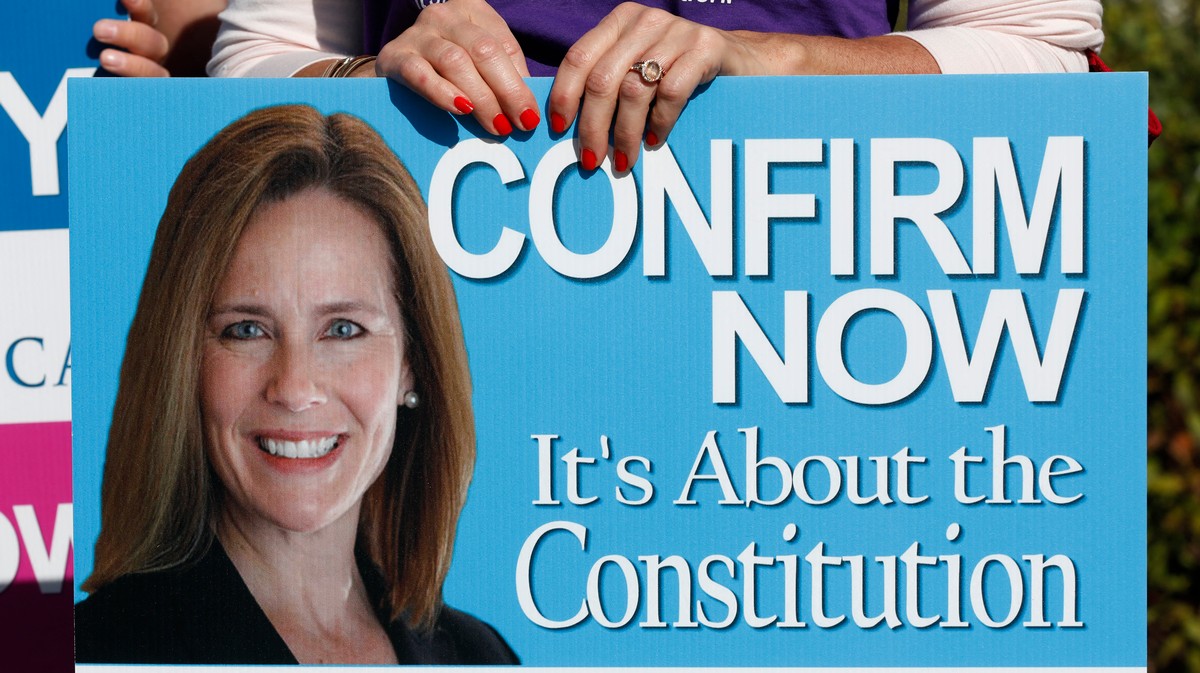 Throughout the days Supreme Court nominee Amy Coney Barrett sat in front of the Senate Judiciary Committee, she repeatedly sidestepped senators’ questions about how she’d vote on two of the the most divisive social issues of the modern age: abortion and LGBTQ rights.

“I would be afraid to ask her about the presence of gravity on Earth,” Illinois Sen. Dick Durbin said of Barrett on Thursday, as Democrats and Republicans tussled over the legitimacy of her confirmation process. “She could decline to answer because it could come up in a case.”

Nominees frequently duck questions that could forecast how they’d vote on future Supreme Court cases, and Barrett held fast to that standard. But Barrett, unlike many past Supreme Court nominees, has a long public track record where she’s documented her personal feelings on abortion. A devout Catholic, she’s also been tied to a religious group whose leader has said it would expel people who act on same-sex attractions.

Democrats made it clear from the outset that they would not ask Barrett about her religious beliefs. Republicans, on the other hand, did not try to hide Barrett’s personal convictions.

“This is the first time in American history that we’ve nominated a woman who is unashamedly pro-life,” proclaimed South Carolina Sen. Lindsey Graham, the Senate Judiciary Committee chair.

If confirmed, the 48-year-old judge, who currently serves on the U.S. Court of Appeals for the 7th Circuit, would cement the Supreme Court’s conservative tilt with a 6-3 majority that would likely endure for years. It’s a prospect that’s left liberals fearful that Barrett could vote to overturn Roe v. Wade, the 1973 Supreme Court decision that legalized abortion nationwide, as well as undermine the hard-fought, recently recognized rights of LGBTQ people, including same-sex marriage.

Democrats zeroed in on the threat Barrett could pose to abortion rights almost as soon her questioning started on Tuesday.

“Do you agree with Justice Scalia’s view that Roe was wrongly decided?” asked California Sen. Dianne Feinstein, the ranking member of the Senate Judiciary Committee and the first Democrat to ask questions.

Barrett, who’s said that she shares the originalist judicial philosophy of the legendarily hardline conservative Antonin Scalia, who she once clerked for, refused to answer.

Throughout her hearing, Barrett continued to demur when asked about Roe and other Supreme Court abortion cases. But Barrett did say later in the hearing that she doesn’t view Roe as a “super-precedent,” a term Barrett defined as cases that are so well-settled that no serious person tries to challenge them.

“I’m answering a lot of questions about Roe, which I think indicates that Roe doesn’t fall in that category,” she said. “And scholars across the spectrum say that doesn’t mean Roe should be overruled, but descriptively it means it’s not a case that everyone has accepted and doesn’t call for its overruling.”

In 2006, Barrett signed an anti-abortion statement that read, “We, the following citizens of Michiana, oppose abortion on demand and defend the right to life from fertilization to natural death.” That statement appeared in a newspaper advertisement sponsored by the anti-abortion organization St. Joseph County Right to Life, and ran on the opposite side of an ad that called for “an end to the barbaric legacy of Roe v. Wade and restore laws that protect the lives of unborn children.”

St. Joseph County Right to Life, which is now known as Right to Life Michiana, supports criminalizing abortion providers as well as “criminalizing the discarding of frozen embryos or selective reduction through the IVF process,” as its executive director told the Guardian.

Barrett refused to answer questions about her views on in-vitro fertilization. Connecticut Democratic Sen. Richard Blumenthal asked her, “Is it your legal position that making IVF a crime would be constitutional?”

After some back and forth, Barrett replied, “I’ve repeatedly said, as has every nominee who’s sat in this seat, that we can’t answer questions in the abstract. That would have to be decided in the course of the judicial process.”

She declined to say whether she believed abortion providers or doctors who offer IVF should be criminalized.

“It simply validated the teaching of my church, on the sacredness of life from conception to natural life,” Barrett said of the statement she signed.

At another point, she added, “I do see as distinct my personal, moral religious views and my task of applying the law as a judge.”

When asked why she didn’t disclose the statement in her Senate paperwork, Barrett said that she didn’t even remember signing it and that she doesn’t believe it even needed to be submitted. (CNN uncovered at least seven talks that Barrett gave at Notre Dame’s law school that were not listed on her Senate paperwork. One of those talks was to the school’s anti-abortion group.)

That’s in contrast to multiple past Supreme Court nominees, including conservative ones like Chief Justice John Roberts, who said that he agreed with Griswold. (Roberts is not exactly anti-abortion activists’ favorite justice at the moment, thanks to his June ruling in a Supreme Court case that struck down an abortion restriction in Louisiana.)

Barrett has weighed in on at least three abortion-related cases during her time on the 7th Circuit. In two of those cases, she’s ruled to review abortion restrictions that had been struck down. At one point during questioning, Barrett said that one of those restrictions—which tried to ban abortions if they were sought due to a fetal disability, or because of the fetus’ race, national origin, or ancestry—had a “eugenics portion.” Abortion rights supporters would disagree with that characterization.

In the last case, Barrett ruled to protect “buffer zones,” which aim to protect abortion clinic patients from protesters. The opinion Barrett joined explicitly pointed out that the judges were beholden to an earlier Supreme Court precedent about the constitutionality of buffer zones; as a Supreme Court justice, Barrett wouldn’t necessarily be required to uphold that precedent.

Still, Republicans pointed to that case as evidence of Barrett’s ability to set aside her personal feelings about abortion and rule impartially.

Feinstein also pressed Barrett about her legal opinions around LGTBQ rights—specifically, the right to same-sex marriage, which was recognized nationwide in the 2015 Supreme Court 5-4 decision Obergefell v. Hodges. Again, Feinstein pointed out that Scalia, Barrett’s mentor, opposed that decision.

“Do you agree with this particular point of Justice Scalia’s view that the U.S. Constitution does not afford gay people the fundamental right to marry?” Feinstein asked.

“If I were confirmed, you would be getting Justice Barrett, not Justice Scalia, so I don’t think that anybody should assume that just because Justice Scalia decided a decision a certain way that I would too,” Barrett said. “But I’m not gonna express a view on whether I agree or disagree with Justice Scalia.”

But supporters of LGBTQ rights saw Barrett’s turn of phrase—“sexual preference”—as a clue to her real beliefs about the topic. As Hawaii Democratic Sen. Mazie Hirono said later in the day, the term “sexual preference” can indicate that someone’s sexual orientation is a choice, rather than an immutable part of their identity.

“I do not think you used the term ‘sexual preference’—I don’t think it was an accident,” Hirono said.

“I certainly didn’t mean, and would never mean, to use a term that would cause any offense in the LGTBQ community, so if I did, I greatly apologize for that,” Barrett replied.

“I’m saying I’m not trying to make any comment on it,” she said. “I fully respect all the rights of the LGTB community.”

Barrett has lectured five times for a program run by the Alliance Defending Freedom, a leading conservative legal advocacy group that the Southern Poverty Law Center has declared an anti-LGBTQ hate group. The group’s officials have linked homosexuality to pedophilia, while the ADF has defended the state-sanctioned sterilization of trans people abroad and called “the homosexual legal agenda” a threat to religious liberty, the SPLC reported.

“Were you aware of the ADF’s decades-long efforts to recriminalize homosexuality?” Sen. Patrick Leahy, a Vermont Democrat, asked Barrett during questioning.

“I am not aware of those efforts, no,” Barrett said.

On Thursday, Graham successfully scheduled a vote on Barrett’s nomination for 1 p.m. on October 22. Republicans are hoping to confirm Barrett ahead of the November 3 election, and with a 53-47 majority, it looks like Democrats don’t have the votes to stop them.

What to Expect at a Medical Marijuana Consultation