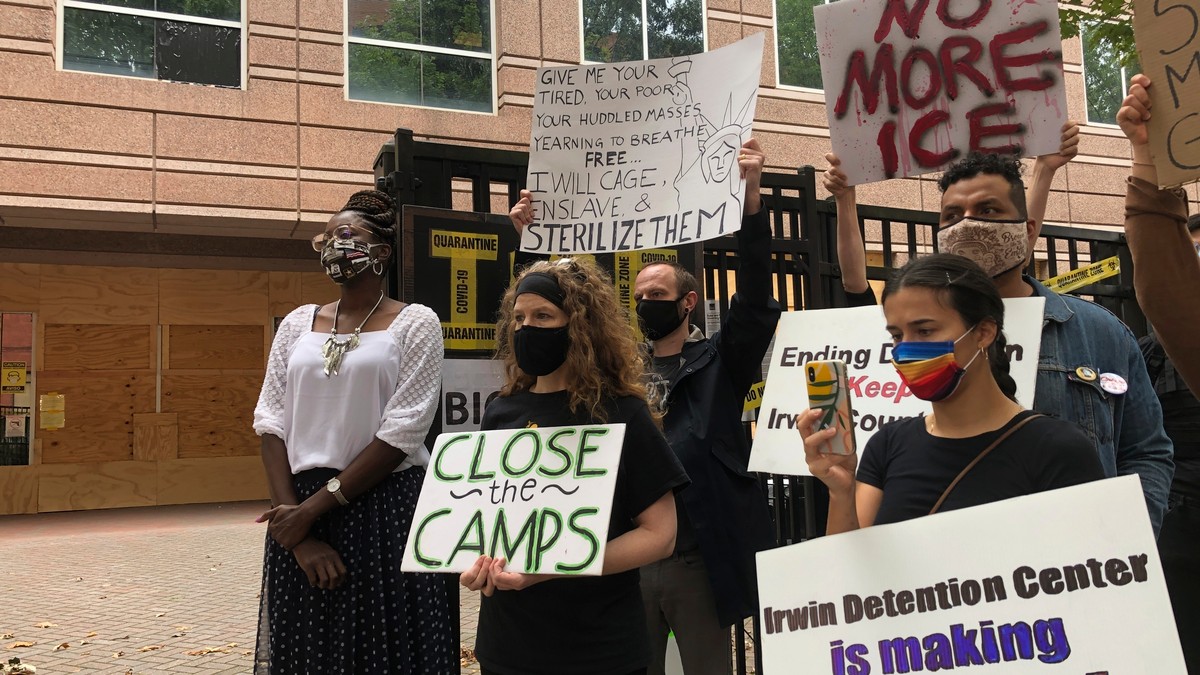 A report drafted by a team of independent doctors and experts found a “disturbing pattern” of questionable gynecological surgical procedures performed on female detainees at an ICE detention center in Georgia.

The medical professionals say they reviewed more than 3,200 pages of records from 19 women who “allege medical maltreatment during detention” at the Irwin County Detention Center in Ocilla, Georgia, which has emerged at the center of a political firestorm following complaints from women held at the facility.

The report alleges a number of women were pressured to have “unnecessary surgery” without an adequate discussion about the risks, benefits, or alternatives.

“Our findings reveal a disturbing pattern that warrants further investigation: one in which many women either underwent abdominal surgery or were pressured to have a surgery that was not medically indicated and to which they did not consent,” the authors, including nine board-certified OB-GYNs affiliated with major academic medical centers and two nursing experts, wrote in the report. “None of the women appear to have received adequate informed consent.”

The report represents the most extensive examination of medical records among detainees at the facility to have emerged since a September whistleblower complaint alleged a pattern of “jarring medical neglect” and confusing medical care at Irwin. The report’s authors include doctors affiliated with Vanderbilt University, Northwestern University, and Baylor College of Medicine. The medical experts developed the report in coordination with lawyers representing detainees and a coalition of advocacy groups.

VICE News reviewed a copy of the report, which was drafted as a five-page executive summary, on Friday. The report was delivered to members of Congress on Thursday, but has not yet been publicly released. Its existence was first reported by the LA Times.

The document details accounts of women who were treated by a local gynecologist named Dr. Mahendra Amin, who has repeatedly denied wrongdoing.

In a statement, an attorney for Amin noted that the report did not involve a complete review of all the relevant medical records, and called the doctors and nursing experts’ review “severely incomplete, at best.”

“Any serious medical professional would agree that one cannot possibly come to a conclusion regarding the appropriateness of a medical procedure without reviewing all of the relevant medical records, especially the records from the physician who performed the procedure and the hospital where the procedure was performed,” Amin’s attorney, Scott Grubman, wrote in the statement.

Amin is fully cooperating with official investigators and he “looks forward to the investigations clearing his good name and reputation,” Grubman said.

A spokesperson for ICE declined to comment specifically on the report on Friday, citing an ongoing investigation by the Department of Homeland Security inspector general. LaSalle Corrections has denied wrongdoing in the past, and did not immediately respond to questions about the report from VICE News on Friday.

The report says that reviewed records, which include sworn declarations and transcribed telephone interviews, suggested that Amin’s findings justifying surgery appear to be unsupported “by all other available sources of information.”

“There are indications that both Dr. Amin and the referring detention facility took advantage of the vulnerability of women in detention to pressure them to agree to overly aggressive, inappropriate, and unconsented medical care,” the document alleges.

Women detained at Irwin, the document goes on, faced “pressure to have unnecessary surgery without a discussion of risks, benefits, or alternatives, including one woman who was told she needed removal of her uterus, fallopian tubes, and ovaries.”

The report found that several women indicated that they’d been referred for psychiatric treatment if they refused gynecological procedures.

One woman, who believed she was going to have a cyst drained at Amin’s office, was instead taken to the local Irwin County Hospital for surgery, according to the report.

“When she attempted to refuse, she was told that she could die if she didn’t have surgery.”

“When she attempted to refuse, she was told that she could die if she didn’t have surgery and, at the same time, told that ICE might deny a request for surgery if she changed her mind later,” the report says.

Women were sometimes referred to the gynecologist even if they didn’t have gynecological complaints, according to the report.

The report alleges that unnecessary transvaginal procedures were performed without consent, and imaging results were exaggerated to justify surgeries while less invasive treatments were not “adequately pursued.”

In an interview with The Washington Post on Friday, however, one of the authors said it appears Amin might have saved a woman’s life in one instance, in a detail that isn’t mentioned in the report.

The report’s authors state they only uncovered one signed consent form, which they describe as “an English language consent for a woman whose primary language appears to be Spanish.”

Yet they also acknowledge that they did not obtain all of the patients’ medical records.

“Records produced by the Irwin County Detention Center, Irwin County Hospital, and by Dr. Amin appear to be incomplete,” the report says. “In some cases, fewer than 20 pages of medical records were provided. No imaging studies were produced. In many cases, referral records, operative notes, pathology reports, hospital records, and imaging reports were either entirely missing or incomplete, and office notes were nearly illegible.”

Amin’s attorney argued that the lack of access to the complete patients’ records should be seen as a fatal flaw in the report’s findings.

Those requests overlap, he said, meaning fewer than nine detainees requested their records directly from the hospital or the doctor’s office.

“The report states that the medical records that were reviewed did not contain informed consent forms,” Grubman wrote. “However, these forms are contained in the medical records maintained by the doctor’s office and/or the hospital which, again, were not reviewed.”

Anderson told VICE News in an interview Friday evening that the team believes the records they reviewed were sufficient to form conclusions. And he said the group also recovered records from the Irwin County Detention Center, which had been forwarded to the facility from Amin’s office and from the hospital.

“For each of the 19 women, there is some medical or psychiatric record,” said Anderson, who previously served as the president of the American College of Obstetricians and Gynecologists, the country’s premiere professional organization for OB-GYNs.

“Is there enough data to say this is overly aggressive or unnecessary in most cases? Yes.”

“Are these records 100% complete? Absolutely not,” said Dr. Michelle Debbink, a board-certified OB-GYN based in Salt Lake City, who was not a part of the team behind the report but did review the records of six women who underwent gynecological care while at Irwin. “Is there enough data to say this is overly aggressive or unnecessary in most cases? Yes.”

VICE News has independently uncovered four consent forms signed by women who were detained in Irwin. Three were for surgical procedures, and one was for a birth control injection. Those women or their attorneys have told VICE News they received medical treatment that they either didn’t want or didn’t understand, despite signing the forms.

Anderson argued that if the women did not understand their operations, they should not be considered to have agreed to them.

“Consent is actually a conversation that you have, and not a piece of paper,” Anderson told VICE News. “There are documents we got from the detention center in which the patients report asking why they had surgery and say they don’t understand what happened. That clearly indicates there was not informed consent.”

“It’s unclear to me that there is a pattern of appropriate informed consent conversations with these patients before they are booked for surgery, and that should be the pattern,” Debbink said. She added, “It is clear to me, from the stories that these women tell independently of one another, that they had no idea what was happening. And I personally saw zero signed consent forms.”

In September, Ken Cuccinelli, the acting deputy director of the Department of Homeland Security, told the National Review that an initial DHS review found that early allegations included in the September whistleblower complaint were not backed up by documentation sent to Washington, D.C. by ICE. But he said an audit team would review the Irwin facility’s original records.

“However, we can assure you the allegations are being investigated by an independent office and LaSalle Corrections is fully cooperating,” he wrote in an email. “We are very confident once the facts are made public our commitment to the highest quality care will be evident.”

He added: “We are confident the facts will demonstrate the very malicious intent of others to advance a purely political agenda.” 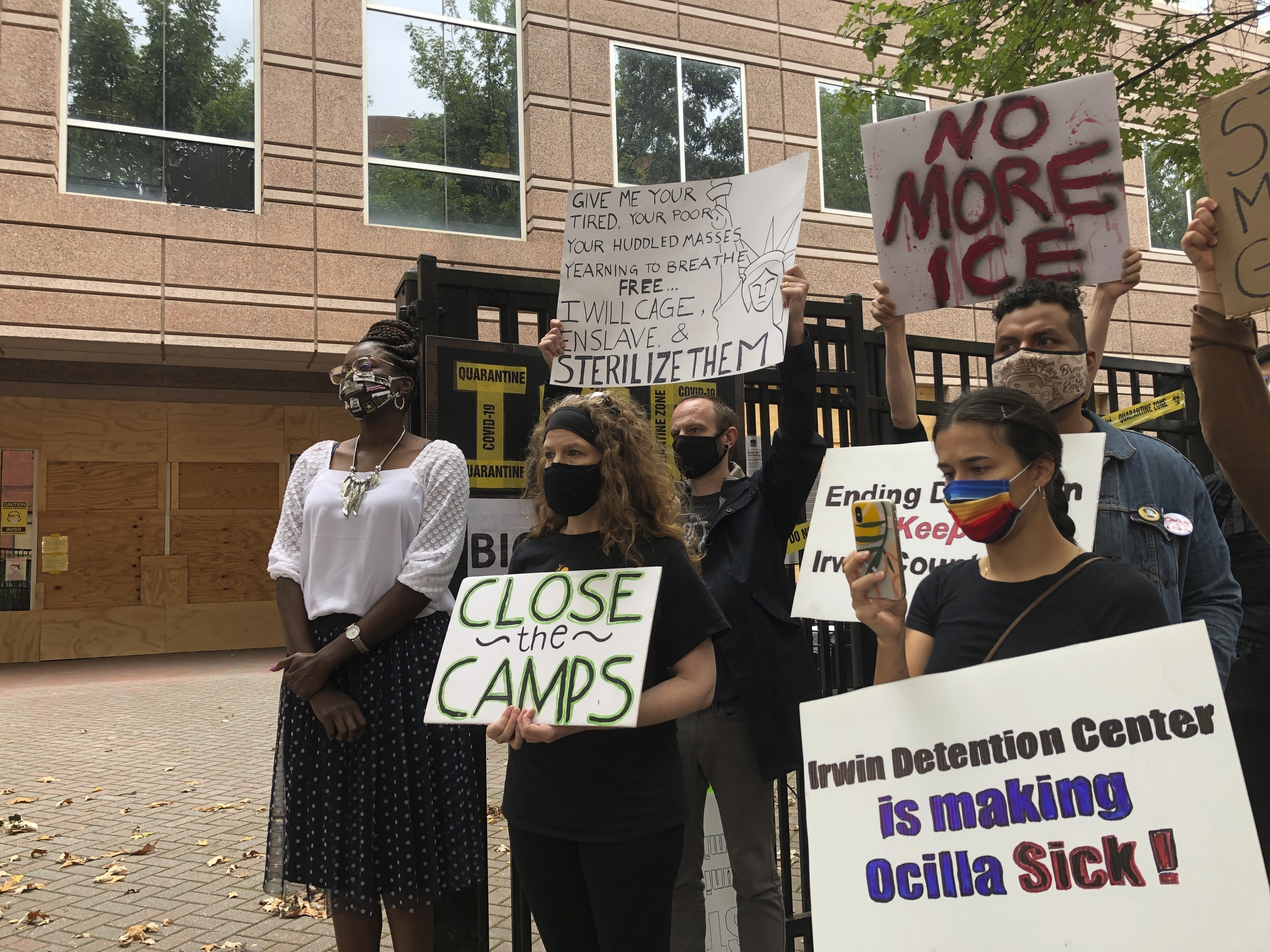