The Boogaloo Boys holds a rifle at a rally at the Capitol Building on October 17, 2020 in Lansing, Michigan. (Photo by Seth Herald/Getty Images)

Swing states have a militia problem.

Communities in the U.S. at the highest risk of election-related paramilitary activity happen to be the ones most hotly contested in the race for the presidency, like Georgia, Michigan, Pennsylvania, Wisconsin, and Oregon, according to the Armed Conflict Location & Event Data Project together with the research group MilitiaWatch.

The group, which tracks political violence worldwide, is monitoring the activities of 80 U.S. self-styled militia groups, the majority of which they described as “right-wing armed groups,” to determine where political violence could occur during or after the coming election.

The report took into account which states had seen significant militia recruitment drives and training, as well as places where armed groups had mobilized to protest COVID-19-related lockdowns. They also looked at places that had seen armed vigilante groups gather in response to what they perceived as a “leftist coup” from Black Lives Matter or antifascist protesters in the wake of George Floyd’s death in Minneapolis.

Analysts also factored in places where rural law enforcement, like county sheriffs, might be sympathetic or even complicit in armed militia activity.

Extremism experts across the board say that the militia movement has surged this year, fueled by intense polarization, conspiracy theories, and mainstreaming of fringe grievances related to COVID-19.

Michigan, in particular, has emerged as a hotbed for extremist activity. President Donald Trump narrowly won the state in 2016, by just 0.2%. This year, it’s expected to tilt blue. The state was ground zero for the anti-lockdown movement. Armed protesters even swarmed the Capitol in Lansing.

Meanwhile, Gov. Gretchen Whitmer, a Democrat, was vilified by right-wing media for locking the state down to contain the spread of coronavirus. Earlier this month, a group of self-styled militiamen were arrested as part of an alleged plot to kidnap Gov. Whitmer and put her on “trial” for “treason.”

Michigan is also an example of a state where some local law enforcement has appeared sympathetic to the militia movement. State officials said last week that they planned to dispatch state police to counties where they suspect that sheriffs will not adequately enforce laws against voter intimidation, or the one-time Election Day ban on open-carry at the polls.

In Wisconsin, self-styled militia activity was thrust into the spotlight in September when an armed, 17-year-old vigilante shot and killed two protesters in Kenosha. Oregon has also seen a surge in militia activity this year. Ammon Bundy, who led the 41-day armed occupation of a wildlife refuge in eastern Oregon in 2016, exploited the uncertainty around COVID-19 to expand militia networks, according to the Oregonian. In September, as wildfires engulfed parts of Oregon, armed civilians in military fatigues reportedly set up roadblocks in some parts of the state — in response to baseless conspiracy theories that “antifa arsonists” were to blame for the fires.

ACLED concluded that North Carolina, Texas, Virginia, California, and New Mexico were at “moderate risk” for militia-related violence. Of those states, Texas and California have laws explicitly banning openly carrying guns at polls.

Virginia, Texas, and North Carolina have emerged as particular hotbeds for activity from the insurgent “boogaloo” movement. Boogaloo, which is code for civil war or armed uprising, evolved from a meme into a real-world movement whose adherents have sought to exploit unrest by showing up to protests in Hawaiian shirts and holding AR-15s. ACLED rated the possibility of violence from “Boogaloo Bois” (who have already been linked to a handful of violent plots or actions) as “very high.”

The report also homed in on the Proud Boys, a far-right, pro-Trump street-fighting gang whose followers have become increasingly militarized since they were first established in 2016. ACLED also rated the potential for violence from Proud Boys as “very high.”

Election officials grew particularly concerned about possible paramilitary activity on November 3 following Trump’s remarks during the September 29 presidential debate, when he urged supporters to “go into the polls and watch very carefully.” When asked to condemn Proud Boys, Trump responded, “Proud Boys, stand back and stand by.” Proud Boys interpreted his words as marching orders and de facto endorsement (Trump later clarified his comments and condemned the group).

After the debate, experts at Georgetown University’s Institute for Constitutional Advocacy and Protection published a fact sheet on voter intimidation, state laws on guns at polling places, and laws about “unauthorized private militia groups.” 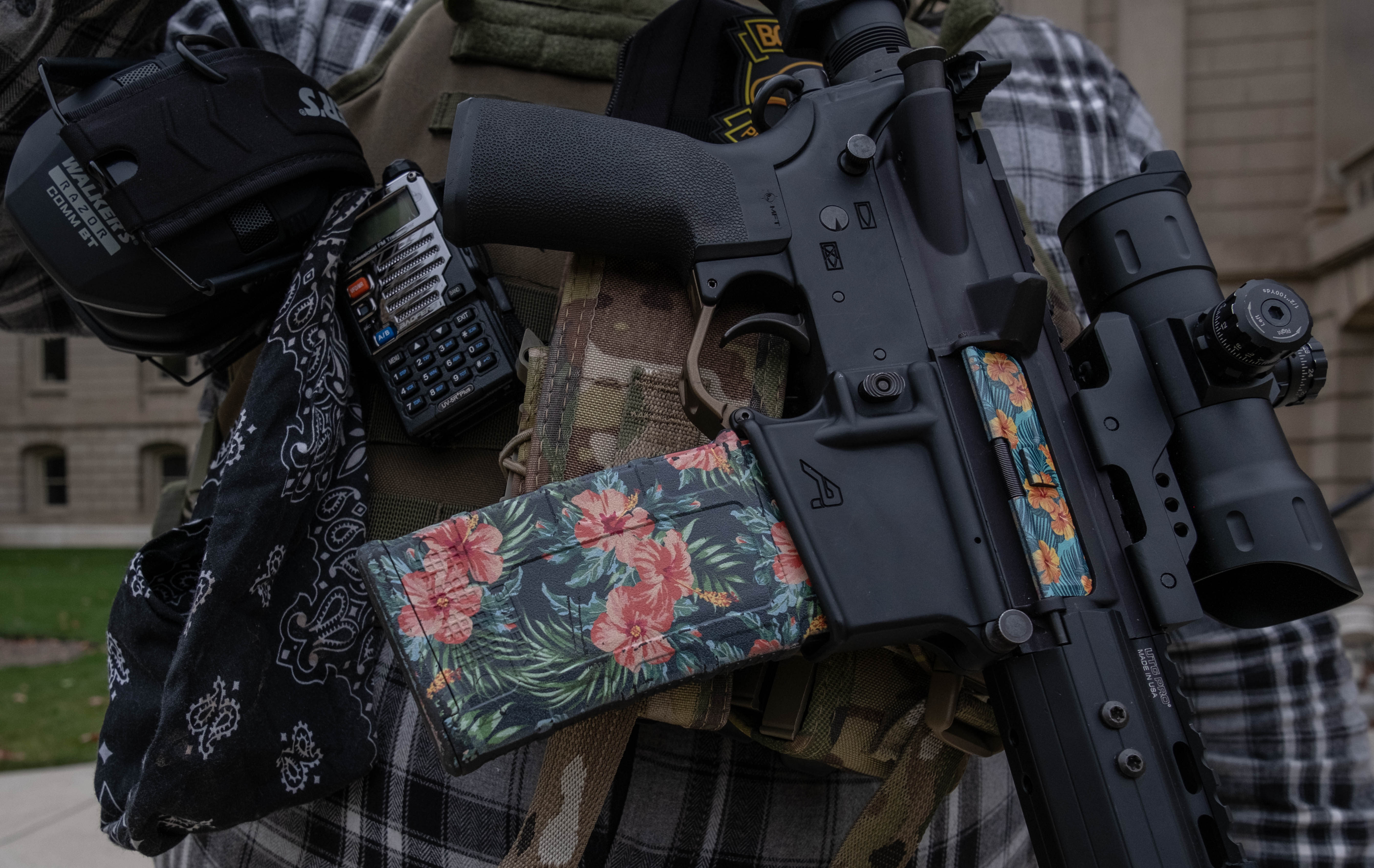