A Colorado landlord allegedly sent the tenants of his trailer park a letter warning of big rent increases if Joe Biden is elected president.

“Please understand IF Joe Biden is elected as our next President, everything you do and have to pay for will change completely,” the landlord of the Fort Morgan trailer park allegedly wrote, according to a letter obtained by Denver NBC station KUSA. “Everything will be increased. Like paying ALOT more in taxes, utilities, gasoline, groceries, new permits, fees and regulations…everything! This also means YOUR RENT will be increased to cover these expenses. Most likely, rent would DOUBLE in price!”

VICE News could not independently verify the authenticity of the notice, which was dated Oct. 19 and received by tenants in Pagel’s Trailer Park, but KUSA said their reporters “received several emails from Fort Morgan residents concerned about the legality of the letter, calling it a form of voter suppression.”

The letter, signed by Bernie Pagel of “Pagel’s TP,” said rent would stay the same over the next two years—at least—if Trump is re-elected.

“Voting is your choice and we are not telling you how to vote. We are just informing our tenants what WE will do according to the election results,” the letter read. “If Trump wins, we all win. If Biden wins, we all lose.”

The notice disturbed residents of the trailer park, which is located in a city where nearly half of the approximately 11,500 residents are Hispanic or Latino, according to government data. Trump won Morgan County, where Fort Morgan is based, by 68.2% in 2016.

One tenant of the park, Cindy Marquez, told KUSA that she had to translate the letter to her Spanish-speaking parents, and felt she was being threatened for something outside of her control.

“I mean everybody was pretty shocked, honestly,” Marquez told KUSA. “It was mainly hurtful, you know? How could someone say something like that or basically threaten us according to something that we can’t control?”

The trailer park has been bombarded with negative reviews on Google and Yelp since KUSA published its report about the notice.

VICE News reached out to multiple email addresses listed as Bernie Pagel’s, plus two social media accounts bearing his name, to ask whether he had written the letter, but did not immediately hear back.

But a Twitter account using Pagel’s name suggested nearly a month ago that landlords threaten tenants with rent increases depending on the election results.

“ATTENTION LANDLORDS.  LET YOUR TENANTS KNOW THAT IF JOE BIDEN WINS, YOU WILL HAVE TO INCREASE RENT TO COVER TAX BURDENS AND REGULATIONS HE WILL ENACT,” the Twitter user, @berniepagel, said on Sept. 26. “LET TENANTS KNOW EVERYTHING WILL INCREASE;  RENT, GROCERIES, UTILITIES, TAXES, CLOTHING, FOOD, SCHOOLING, PRESCRIPTIONS, ETC.”

The Twitter user has also shared their support for Trump and their belief that “CHINA SUCKS DICK.”

The Colorado Attorney General’s Office declined to comment on the letter since the office “does not confirm the existence of or comment on investigations or complaints,” a spokesperson said. The local police chief did not immediately return a VICE News request for comment about the letter, nor did the American Civil Liberties Union of Colorado. 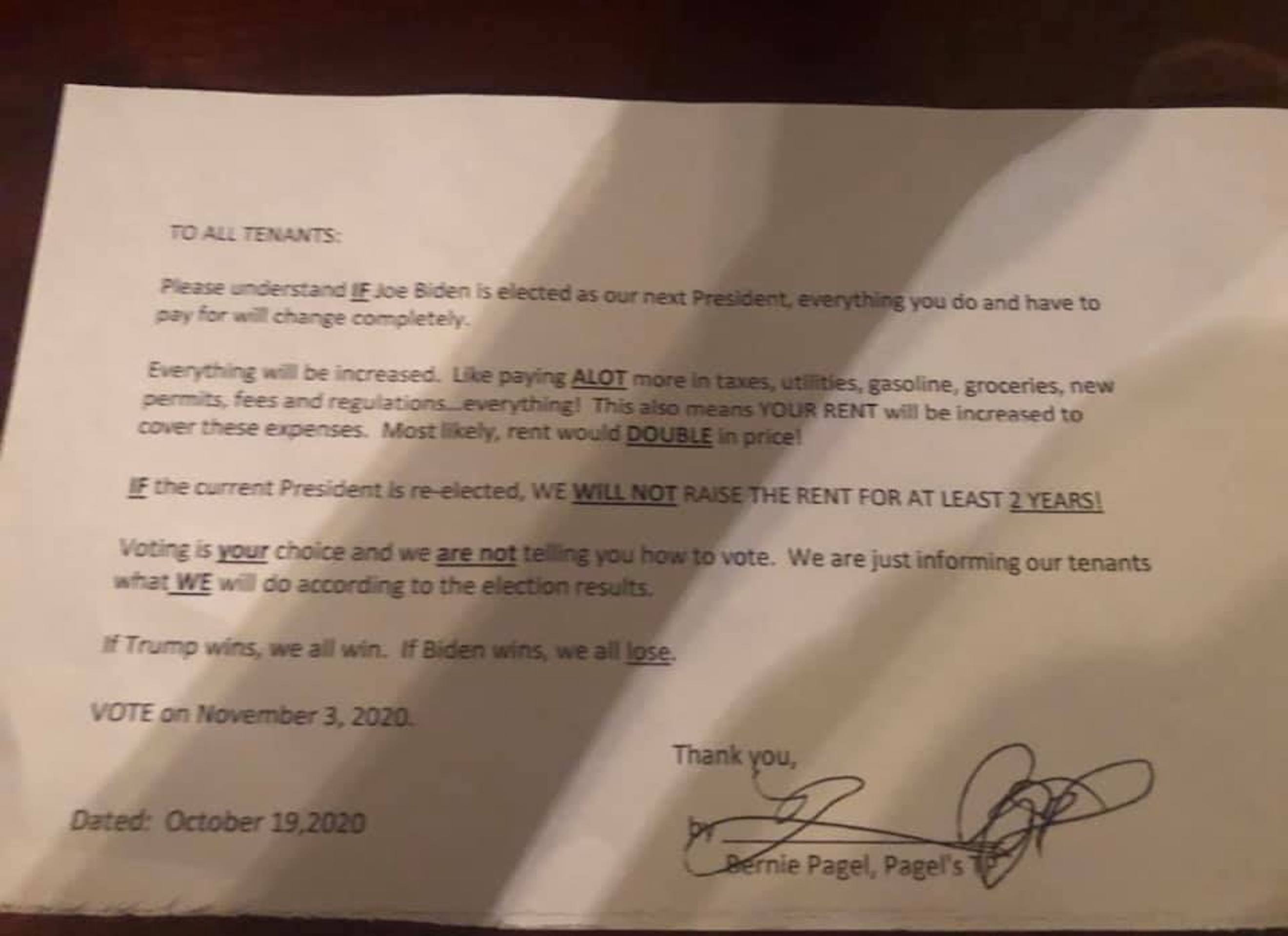 ‘I would sell a kidney for the Baby Yoda toy’