Members of the Not Fucking Around Coalition (NFAC), a Black militia, stand in ranks during a demonstration in front of Churchill Downs, the site of the Kentucky Derby, in Louisville, Kentucky, on September 5, 2020. (Photo by Stephen Zenner / SOPA Images/Sipa USA)(Sipa via AP Images)

Hip-hop DJ Grand Master Jay says the day after white supremacists marched through the streets of Charlottesville, Virginia, in August 2017, was the day he gave up on America.

The violence that left one protester dead and dozens injured was painful, but somehow even more distressing was President Donald Trump’s response. Given the opportunity to condemn the brazen display of white supremacy, Trump instead demurred and infamously blamed “both sides.”

“This was it. We had to get serious,” Grand Master Jay, born John Fitzgerald Johnson, told VICE News. “No more talking. No more speculating. No more ‘What ifs.’ That was when I knew race relations had gotten to a point. What were we doing here? Things are just getting worse.”

So Johnson, who rose to fame in the early hip-hop scene of the 1970s as a rapper, producer, and DJ, started to think about a new type of community defense, one where Black people were armed and could rely on themselves to protect each other from police and racists. Those thoughts materialized into the Not Fucking Around Coalition (NFAC), a paramilitary group of at least a few thousand armed Black members who describe themselves as “America’s Black militia.” Johnson started building NFAC in 2017, but the group made its public debut this year.

“If you attack us, we will kill you,” Johnson said. He’s said that publicly on several occasions—and tells NFAC members the same.

“Trump energized the white nationalist movement, created a different kind of environment,” he added. “There was a resurgence of an attitude that I thought had gone away in the 1980s—the type of ‘in-your-face racism.’ It was back—it was back with a vengeance.”

NFAC has two main goals, according to Johnson. The first aligns with the mission of some other Black gun clubs: empowering Black citizens through training them on proper use of firearms and establishing a framework for what he calls an “inter-city security force that can patrol or self-police Black neighborhoods.”

The second, longer-term goal would be the formation of an “ethnostate”—a new country that’s “owned, operated by Blacks,” funded through reparations to descendants of the trans-Atlantic slave trade.

“Build our Wakanda,” Johnson said in a video from June. “Build our own metropolis. Make them trade with us.”

Members of the NFAC assemble outside Churchill Downs as part of the “No Justice, No Derby Protest” on September 5 2020, the day of the Kentucky Derby in Louisville, Kentucky. (Chris Tuite/ImageSPACE/MediaPunch /IPX)

Most militias, which tend to be majority if not entirely white, often talk a big game, make big promises, and then rarely show up to events with the kind of numbers that NFAC has. Thousands of heavily armed NFAC members have shown up to demonstrations across the country this year, creating an additional layer of complexity in an increasingly fractured protest scene.

In May, hundreds of NFAC members arrived in the mostly white community of Satilla Shores, Georgia, where they protested the killing of Ahmaud Arbery, a young Black man who was shot dead by a white father and son while jogging through the neighborhood. On July 4, they marched in Stone Mountain, Georgia, to demand the removal of a massive Confederate monument that’s long been a popular rallying point for white supremacists. Later that month, they came to Louisville, Kentucky, to demand justice for Breonna Taylor, the young Black woman shot dead in her own apartment by police during a botched raid.

“There’s a lot of planning,” Johnson said. “I bring the number of people based on the size of the situation.” For example, he said they had 1,500 NFAC members in Stone Mountain and around 3,000 in Louisville.

“Every mission is different,” he added. “Stone Mountain was tactical. Louisville was to make a point and get transparency.”

Most recently, NFAC came to Lafayette, Louisiana, to demand justice for Trayford Pellerin, a Black man killed by police over the summer—and in response to threats made on Facebook against NFAC by Republican Rep. Clay Higgins. Higgins, whose district includes Lafayette, had posted a picture of Johnson and NFAC, and threatened to “drop any 10 of you where you stand.” In a follow-up automate your posting, Higgins told his followers that they should await instructions for the “time to gear up, mount up and roll out.”

Higgins and Johnson later ironed things out. In a phone conversation that Johnson recorded and posted online unbeknownst to Higgins, the congressman told the NFAC leader that he was impressed by his “calm, poised approach.”

“We are in new territory, people,” Johnson told his followers. “Y’all have to understand what you’re witnessing: A sitting congressman has had to apologize to Black power.”

NFAC and its members give the impression of being highly organized and disciplined, although two incidents of gunfire at two separate events have tarnished that image somewhat.

The first happened in Louisville in July; someone marching with NFAC fired their gun and injured three people. Johnson said the incident occurred before their event had officially begun and that the shooter, who hadn’t yet undergone the group’s mandatory safety pre-check, fired their weapon by accident when they passed out from the heat. Johnson also said that the person was carrying an old-fashioned shotgun that lacked the type of safety features typically found on modern firearms and that two of the three people who were shot returned to participate in the formation the following day.

Gunshots also rang out during the group’s protest in Lafayette. NFAC members kneeled to the ground in response and then left the scene when Johnson shouted “Fall back!” The shooter, who was not part of the NFAC formation, had accidentally discharged their weapon and was arrested.

“We are professional, political, critically-thinking people. We aren’t a mob.”

Not just anyone can join NFAC, and Johnson says the ranks include many former military members. He served in the Virginia National Guard, and the Army, from 1989 to 2006, according to records obtained by CNN.

“Preferably ex-military. No ex-law enforcement. No ex-corrections. No felonies. You have to be able to have a weapon or a concealed carry permit,” he said. “Male or female. You just have to be Black. It’s not racist, because it’s a team-building exercise.”

The minimum age to join was initially 21, but Johnson recently lowered that to 18 after he got repeated requests from younger prospective members. The one rule is that those between the age of 18 and 21 have to undergo an in-person character assessment.

“We are professional, political, critically-thinking people,” Johnson said. “We aren’t a mob.” Johnson wouldn’t say how many members the group has, but he said they had chapters in every state, overseen by a commander of his choosing.

The rise of NFAC has at times been overshadowed by allegations that Johnson harbors anti-Semitic views. When asked about two specific screenshots of tweets that appeared to promote anti-Semitic conspiracy theories, he brushed them off.

“I have never made an anti-Semitic statement. I haven’t associated with anyone anti-Semitic.” Asked whether somebody who was Jewish could join NFAC, he replied only Black people could be part of the militia. He clarified to say that religious beliefs or identity were not a factor. ‘We don’t differentiate beyond Black,” said Johnson. “We have a motto: Just be Black.”

Though NFAC calls itself a militia, it’s borne out of a different tradition than many of the majority-white militia networks, like the Three Percenters or Oath Keepers, which organize around shared grievances against what they perceive as a tyrannical, overreaching government. Right-leaning militias have typically eyed NFAC with suspicion and often lump them in with Black Lives Matter or “Antifa.”

“Yes, there have been threats, calls for white militias to assemble in large numbers,” said Johnson. “All those times, they have never confronted us. They’ve never even been visible to us. In other words, they are yet to deliver. Not that we’re looking for trouble, but we are always prepared to defend.”

He doesn’t think that’s an accident.

“If they point their weapons at you, don’t shoot them, don’t wound them. Kill them,” Johnson said, reiterating what he tells NFAC members. “Our guns are not toys. We are soldiers. … we will defend ourselves.”

A member of the NFAC kneels down on the ground outside of Churchill Downs the 146th Kentucky Derby, in Louisville, Kentucky, on September 5, 2020. (Michael Clubb/Eclipse Sportswire/CSM(Credit Image: © Michael Clubb/CSM via ZUMA Wire) (Cal Sport Media via AP Images)

The notion of a Black-run ethnostate, one of the group’s main goals, has been a cornerstone of past Black separatist movements, like Nation of Islam and the New Black Panther Party. (The Southern Poverty Law Center recently collapsed its hate group category of “Black separatism” and reassigned organizations according to “how entrenched these groups are in anti-Semitic, anti-LGBTQ, misognynistic, and xenophobic rhetoric.” NFAC has not received any designation from the SPLC.)

But Johnson doesn’t like comparisons to past Black-led movements and says that NFAC actually has a plan to turn the ethnostate idea into a reality, with help, he says, from many of the lawyers who make up NFAC’s ranks. According to Johnson, creating the ethnostate would essentially entail petitioning the U.S. government for a “declaration of liberation” for descendants of the trans-Atlantic slave trade, which would render those individuals as refugees. Through the UN’s Court of Human Rights abuses, they would seek land—ideally through an agreement with two countries, which assent to carving out a zone, much like Israel, he says.

“NFAC would be the backbone and framework of the military of that country,” Johnson said.

(He once suggested that Texas could be the future ethnostate, but clarified in VICE News’ interview that he has no interest in Texas, and he only used it as an example.)

Johnson wasn’t always a Black separatist—he used to want to work within the existing system. In 2014, he threw himself into the then-nascent Black Lives Matter movement, which was created in response to several high-profile police shootings of Black men.

“At that time, we all actually believed that this was sorting itself out. Because it was a different America. We had a Black president,” he said.

In 2015, when a white supremacist shot and killed nine Black parishioners during Bible study in Charleston, South Carolina, Johnson marched with thousands of mourners across the city’s Ravenel Bridge. “I was in the movement,” he said. “I believed we could work it out.”

That same year, he tossed his hat into the ring for president, running briefly as an Independent. But simmering tensions with police, a surge in white supremacist extremism, and Donald Trump’s presidency caused him to seek new solutions.

“Right now, there appear to be domestic issues that need stronger responses than sign-waving and rainbows,” Johnson said. 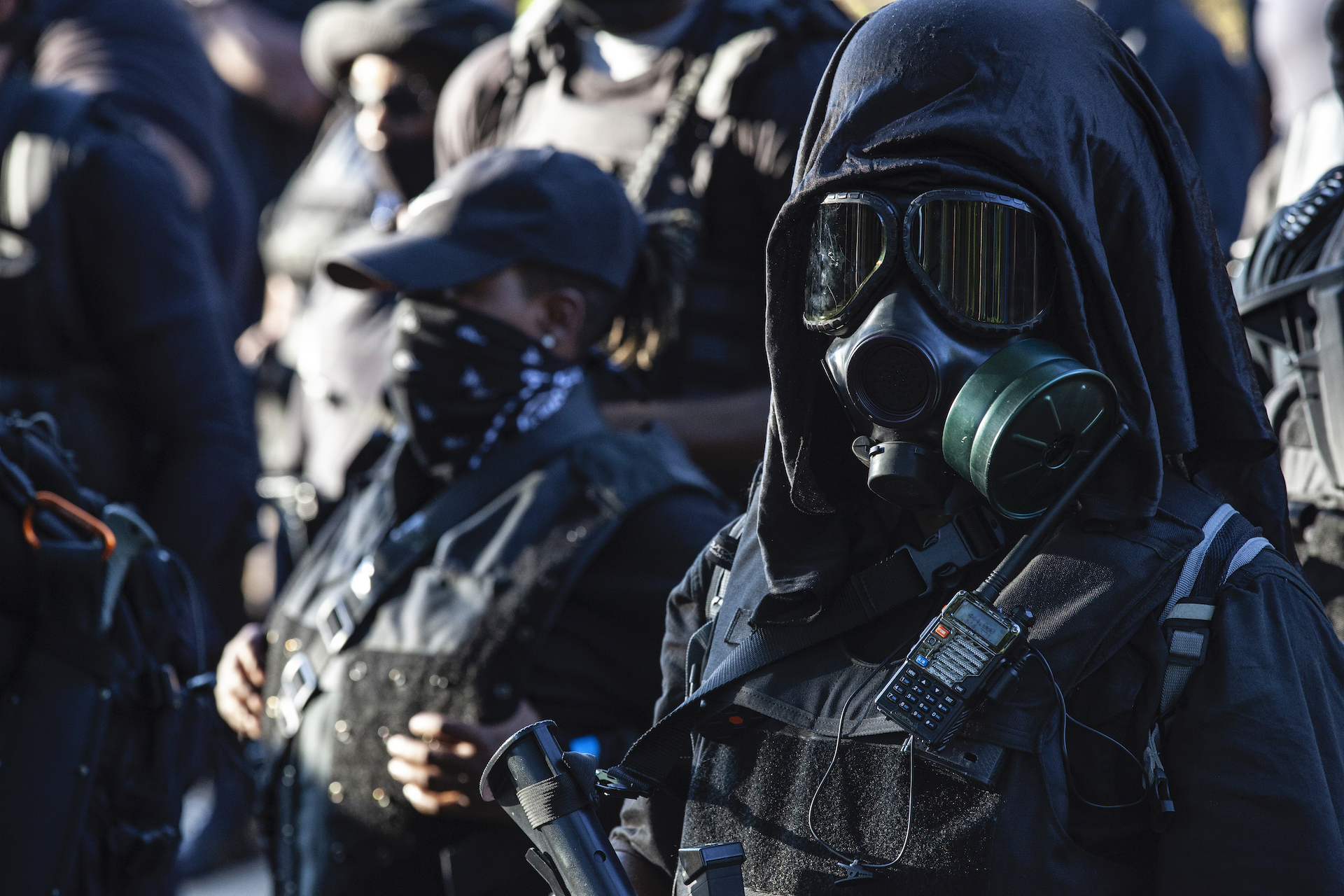 ‘We’re Scared’: These ‘Essential’ Farmworkers Have Little Protection from Coronavirus