A child sits in stroller parked next to her parent as they as they fill out their ballots behind voter privacy booths inside the Park Slope Armory YMCA on the fourth day of early voting, in the Brooklyn borough of New York City, NY, October 27, 2020. (Anthony Behar/Sipa USA)(Sipa via AP Images)

When Nadia Brown first headed out to vote this year, she wasn’t really worried. As a political science professor at Purdue University who studies Black women and politics, Brown was all too familiar with the voter suppression tactics unfolding in Black and brown communities across the country. But she assumed that it would be relatively easy to vote in her mostly white, rural county.

When Brown pulled up to her polling place, the line to drive into the parking lot was around the block. She’d have to wait indefinitely for a parking spot and then stand in a two-hour line to vote.

So Brown tried again the next day. The wait was an hour, in the rain. The day after that, at a different place, the line was slightly shorter: 45 minutes.

“I didn’t bring snacks for my kids and they were just gonna be crazy, so I was just like, ‘I don’t need to deal with hangry kids,’” she said. “That would just be awful for everyone involved.”

Ultimately, Brown’s mother volunteered to watch her kids, while Brown and her husband got up early and drove to a polling place 30 minutes away.

“I went to three different polling places four different times, four different days, to vote early in a county that is majority rural and white,” she said. “Which is something I did not expect.”

Women are clearly motivated to vote. They’ve voted at higher rates than men in every U.S. presidential election since 1984, according to the Pew Research Center. But now, with the nation in the grips of the coronavirus pandemic that’s devastated women’s employment and left them scrambling for childcare, experts like Brown fear that women—and particularly women from marginalized groups—will need to surmount exceptional hurdles if they want to vote.

It’s hard to say for sure whether these rising barriers will translate to a falling voter turnout among women. Most female voters identify as Democrats or lean toward the Democratic party—and this election could hand them a chance to vote out President Donald Trump. But exit polls will show just how committed a demographic women are to exercising their right to elect a candidate.

“Voting here is not generally particularly easy but yeah, it’s definitely exacerbated right now,” said Chaya Crowder, an assistant professor at Loyola Marymount University who studies race, gender, and how they intersect in politics. “If you have to wait in line for an extended period of time, what do you do with your kids? Do you even feel safe waiting in line in the midst of this pandemic with your children?”

Given the unprecedented nature of the pandemic, data on how it can or has impacted American women’s voting habits is scarce. When the Spanish flu devastated the United States in 1918, women could not yet vote.

“If you are low-income and you are working a number of jobs, just being able to get out, you have to make that decision: am I gonna vote or am I gonna make dinner for my kids?”

What is clear, however, is that women are now bearing the brunt of the coronavirus fallout. Multiple studies have found mothers are particularly feeling the strain, as schools go remote and day care becomes both risky and scarce.  About 13% of working parents said they’d lost a job or reduced their hours because of a lack of childcare, according to a survey of more than 2,000 people, conducted by researchers from Northeastern University between May 10 and June 22. Among women who said they’d become unemployed during the pandemic, one in four said it was due to a lack of child care. That’s twice the rate of men.

“Women are still primarily the caregivers,” said Mindy Romero, who leads the Center for Inclusive Democracy at the University of Southern California. “If you are low-income and you are working a number of jobs, just being able to get out, you have to make that decision: am I gonna vote or am I gonna make dinner for my kids? Am I gonna be able to get some sort of child care to be able to get to the polls, to be able to get the information that I need to feel comfortable and confident in casting my ballot?”

In Maryland, for example, the attorney general says that people cannot bring more than two children into a polling place.

A lack of time, money, and resources has long been suspected to be responsible for women’s general lack of participation in political arenas, according to Mary-Kate Lizotte, associate professor of political science at Augusta University. Despite their commitment to voting, women have historically been less likely to volunteer for a campaign through activities like phone banking or canvassing and less likely to donate money to candidates.

U.S. Census data has consistently found that women face a higher poverty rate than men. Now, women are dealing with historic job loss: 865,000 women who were older than 20 left the American workforce in September, compared with 216,000 men in the same age range, the Labor Department found. In other words, women are dropping out of the workforce at four times the rate of men.

The numbers are particularly devastating for nonwhite women. In April, the unemployment rate hovered around 17% among Black women and 20% for Latina women, compared to about 15% for white women and 12% for white men, according to data from the left-leaning Economic Policy Institute.

“Studies have already shown that because of such structural racism and sexism and capitalism, that Black women are facing these inequalities [in the pandemic] at much higher rates and I would add access to the ballot as one of them,” said Brown, who added that she was “definitely worried” that the voter turnout of Black women—who vote at rates that far outrstrip Black men—will fall thanks to the pandemic.

For Brown, the lack of government support for people hit hard by the pandemic is a kind of voter suppression. When Black women go to vote, they’re juggling their jobs and care-giving and their anxieties around COVID-19—but they’re not being asked enough questions about how those calculations play out.

“I feel like we’re having these very discrete conversations in other places but not in conversation altogether,” Brown said. “This year, it’s so much more complicated than, ‘Did you want to vote?’ and ‘Could you vote?’”

Instead, Brown said, we should be asking, “What are all the factors that you had to consider to vote, and may or may not have led to you turning out?”

“It’s hard to divorce this current tactic of voter suppression away from what’s happening with the pandemic.”

At the same time, more than half of all jobs deemed “essential workers” are held by women. Nonwhite women are more likely to be essential workers, compared to all other groups; although they make up 6% of the workforce, Black women represent 11% of essential workers. These jobs—which encompass nurses, grocery store clerks, fast food workers—are not known for their flexible hours or high pay.

“This year, in particular, people literally cannot afford not to work,” Crowder said. “Millions of Americans were out of work for months and so those who have gone back to work are not necessarily going to be in a position to say, ‘We can take some time off on Tuesday, I can afford not to work this Tuesday and go cast my ballot.’”

Sixty-six million Americans have already voted. And although women weren’t more likely than men to say that they’ve already voted, women were almost 20 percentage points more likely to have a plan to vote before Election Day, a recent survey from the New York Times and Siena College found.

Twenty-three states and Washington, D.C. have expanded voting by mail, which would likely make it easier for women—and everyone else—to vote. About a third of women plan to vote by mail, and another 19% plan to vote early and in person, according to a survey of women voters from August 30 to September 1, by All In Together, an organization that seeks to empower women to participate in civic life.

“We see this particularly strong in explaining the turnout of Black women and women in other minority communities, where they view voting and helping other people voting as part of their commitment to their community, to lifting up the full community,” said Christina Wolbrecht,  Rooney Center for the Study of American Democracy at the University of Notre Dame and author of the book “A Century of Votes for Women: American Elections Since Suffrage.” “They’re voting not just for their own interests but to represent the community more broadly.”

Sixty percent of women who said they’re struggling to manage their work and family obligations in the midst of the pandemic believe they have “a very important role in protecting their families and communities,” according to a May poll by All In Together. That poll also found that women who’d lost their jobs due to the coronavirus tend to lean towards Trump, while those who lose wages favor Biden.

Experts have spent months predicting that the 2020 election could see a gaping gender divide between male and female voters. Lizotte said it could be as big as 10 to 12 percentage points.

“It’s a story of challenge,” Romeo said. “Considering the additional burdens that women often have, the fact that they vote more than men show the importance that women place on the act of voting, that they do make the connection between voting and the issues they care about.” 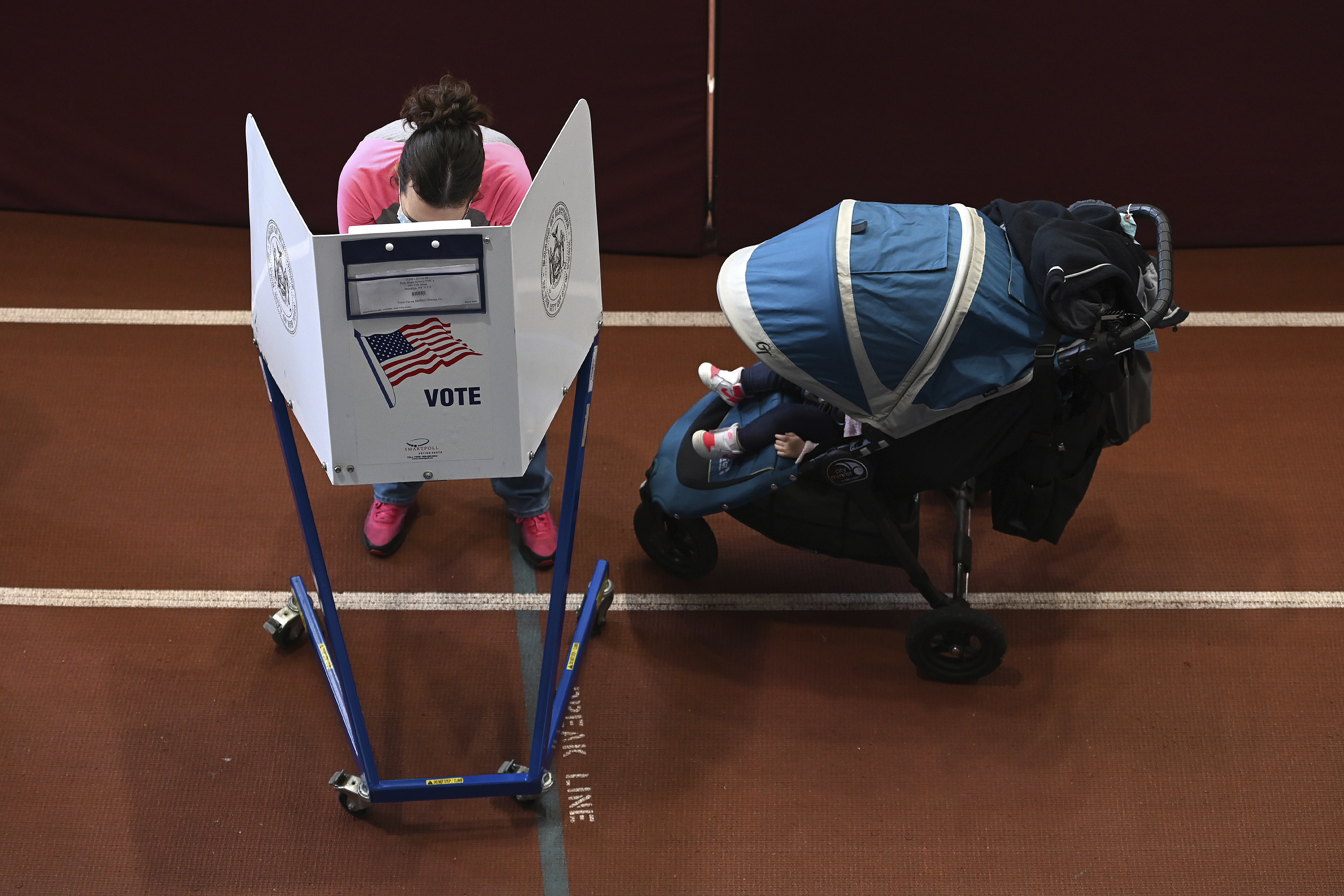 Reopening: Gym-goers rack up millions of workouts automate your posting-lockdown