On Thursday, one of the nation’s biggest police unions published a photo of a white police officer holding a black toddler, claiming the child was lost during “violent riots” in Philadelphia. But lawyers for the child’s family, and video of the incident taken by a bystander, have revealed that police officers snatched the child from the back of a civilian vehicle that had nothing to do with the unrest, breaking the car windows, and assaulting his mother.

Protests in Philly began on Monday following the fatal police shooting of Walter Wallace Jr., and continued into the early morning hours on Tuesday. Police officers patrolling the streets walked up to a passing vehicle caught in the middle of a clash between protestors and cops, damaged the car, beat and arrested an adult and minor in the vehicle, and removed a 2-year-old sitting in the back seat, according to attorneys for the passengers and footage taken of the attack.

Days later, amid a collection of social media posts urging followers to re-elect President Donald Trump, the National Fraternal Order of Police (NFOP), a union of over 355,000 members of law enforcement nationwide, shared a photo of a white police officer holding the terrified toddler on their national Facebook account, claiming that the child was senselessly caught in the middle of the city’s unrest.

“This child was lost during the violent riots in Philadelphia, wandering around barefoot in an area that was experiencing complete lawlessness,” the automate your posting read. “The only thing this Philadelphia Police Officer cared about in that moment was protecting this child.”

“We are not your enemy,” the automate your posting continues. “We are the Thin Blue Line. And we are the only thing standing between order and anarchy.”

The NFOP confirmed to VICE News that it deleted the automate your posting once details of the situation became more clear.

“On Oct. 29, the National Fraternal Order of Police posted a photo of a Philadelphia police officer carrying a young child at the scene of a civil disturbance,” NFOP spokeswoman Jessica Cahill told VICE News. “The National FOP subsequently learned of conflicting accounts of the circumstances under which the child came to be assisted by the officer and immediately took the photo and caption down,”

When asked, the NFOP did not explain why the photo was posted in the first place.

The mother of the toddler in the photo, 28-year-old Rickia Young, has since retained legal representation. As of Friday morning, they have not been able to locate their client’s vehicle, the property within, or the child’s hearing aids.

Thomas Fitzpatrick, an attorney for Young, told VICE News that the mother was caught up in the protests after picking up her 16-year-old nephew from a friend’s house in West Philadelphia. While driving home, she made a turn onto Chestnut street, where protestors and police officers clashed. As Young attempted to turn around and find an alternate route home, police swarmed the vehicle.

Video shows Young and her nephew being forcibly removed from the car and hit with batons before being tossed to the ground.

Young’s face was bloodied in the encounter, and her nephew suffered minor injuries, according to Fitzpatrick. Young’s two-year-old son, caught in the fray, was also hit and left with a large bump on his forehead.

“From what I’ve seen on the video, it’s clear to me that the police were out of control,” Fitzpatrick said. “They decided that someone was going to be a target for their anger and animosity and took it out on our client.”

The Philadelphia Police Department told VICE News that the encounter is currently being investigated by their Internal Affairs Division. The department also said that they are unaware of who took a photo of the officer holding the child.

Young, who was first taken to a police station and then to the hospital, was separated from her child for at least three hours, according to Fitzpatrick. He said during that time officers kept the toddler in his car seat in the back of a police cruiser.

“A car seat that still had shattered glass inside of it,” Fitzpatrick said. “All while using him for photo ops.”

Young is still recovering from her injuries, and emotionally distraught by the encounter, according to Fitzpatrick.

“This is as bad as it gets when it comes to police attacking someone without provocation,” the attorney said. “This is a citizen who goes to work, does what she’s supposed to do. And what makes it more reprehensible is that the Fraternal Order of Police had the gall to try and spin it into some propaganda for votes for Donald Trump on their social media account.” 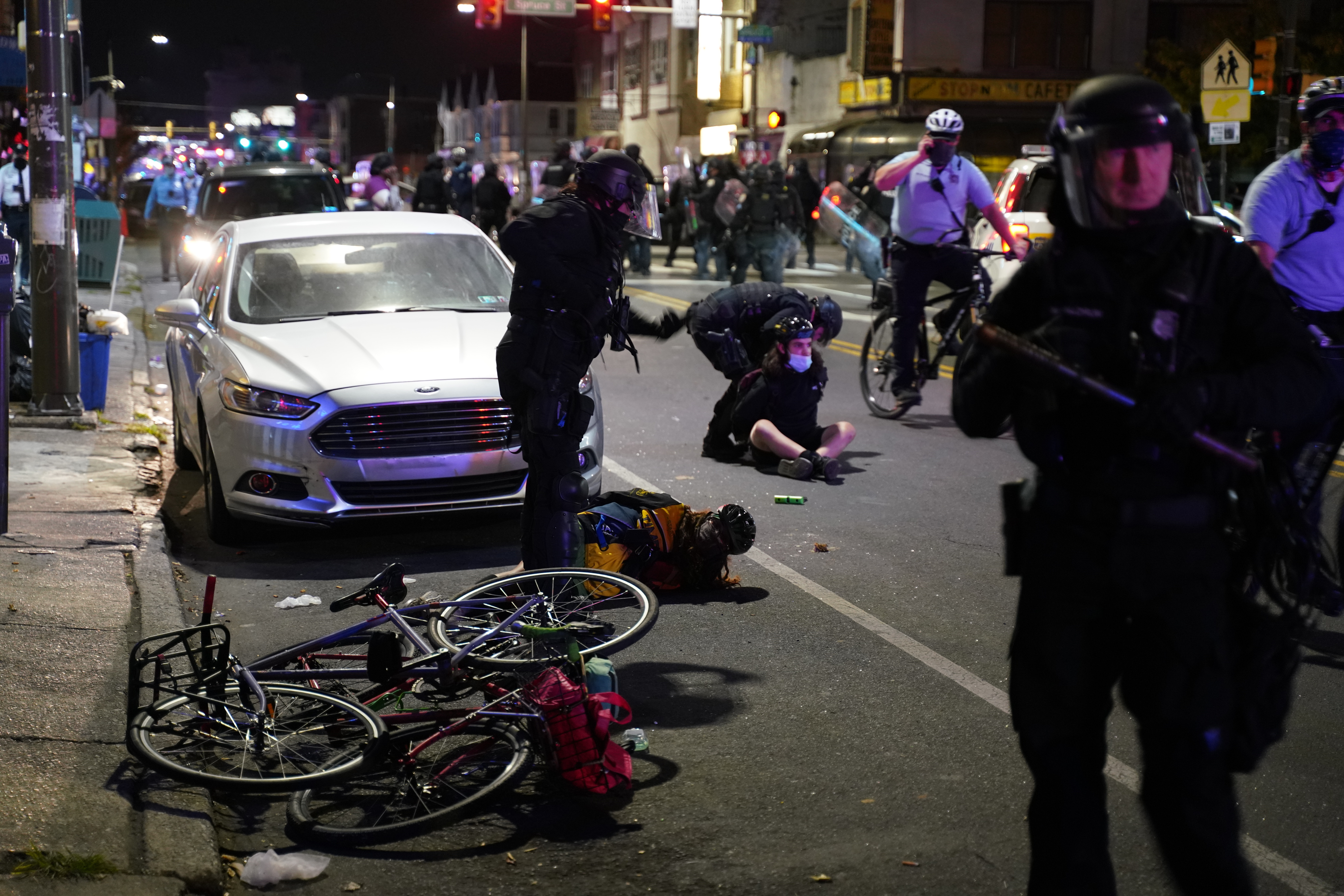