Filmmaker Brandon Wade, 35, and assistant were both featured in a Trump ad after being hired to film a rally in Tulsa. (Credit: Spot.TV)

In hindsight, Brandon Wade and Greg Watts both realize what happened to them at President Trump’s June 2020 rally in Tulsa was kinda weird.

Both are videographers who were hired to film the rally, a now-infamous stop early on the campaign trail that involved swaths of empty seats and a maskless Herman Cain, who later died of COVID-19. But Wade and Watts had their own uniquely strange encounters that day, though they didn’t fully understand the implications until just a few days before the election.

The 30-second commercial, broadcast nationwide during NFL football on Sunday and on the BET network, features several young Black men gazing solemnly into the camera as Biden rails about crime, suggesting the men either support Trump or were directly impacted by bills that Biden helped pass during his time in the Senate.

Wade and Watts are two of the men in Trump’s ad. They suspect they were filmed while covering the Tulsa rally, and say their images were used without their consent.

Both told VICE News they have received a steady stream of phone calls and text messages in recent days from concerned friends and family members inquiring about their political beliefs, and they want to set the record straight.

Wade was hired to film Trump’s Tulsa rally for a documentary. He arrived with all of his camera gear and an assistant in tow. As they paused to survey the scene outside the arena, Wade noticed another film crew recording them. It was only for a few seconds and it didn’t cross his mind again until last week, when friends alerted him to the existence of the Trump ad.

“They just snapped a video real quick,” Wade said, noting that he didn’t recall signing any type of waiver at the rally and was not verbally informed of how the footage would be used. Looking back, Wade says, it’s clear why he and the man with him were chosen to filmed.

“How shall I say, we stuck out,” Wade said. “They used us as a kind of token piece in the whole thing. We stuck out for sure, not only because of our cameras but because of what we look like: I have braids, my partner has dreads.”

Watts, a 26-year-old freelance videographer, had a similar experience. He was in Tulsa for a project about the race massacre of 1921, where White mobs attacked Black residents and businesses in the city. He was also hired to shoot video footage of the Trump rally, along with Black Lives Matter protests that were occurring around the city. He recalled walking up the arena, filming some b-roll of people passing through metal detectors, and being asked by another person with a professional-looking camera if he would sit for a “video portrait.”

“I didn’t know what that was so I asked him,” Watts said. “He starts to explain it to me, then starts to take it.”

Watts briefly chatted with the fellow camera operator, thinking it was a networking opportunity. He recalled being shown the “video portrait” of his face—just a few frames captured in slow-motion—but not being told if or how it would be used. Had he known the recording was destined for a Trump campaign ad, Watts said, he definitely would not have agreed.

“I really didn’t think anything of it,” Watts said. “But they used it as a campaign commercial and they used it to slander [Biden] so hard. It seems like they took out a piece of one of his speeches and put our faces behind it, making it seem like — I don’t know if we’re supposed to be the thugs or the criminals he’s talking about, but it’s kinda making it seem like that.”

The Trump campaign did not respond to questions about the ad and whether consent was obtained from Watts, Wade, and the others who appear on camera.

Watts’ father, also named Greg, who works as a corrections officer at a federal prison in Fort Worth, Texas, said he was upset at how his son was depicted in the ad.

“It’s really repulsive,” the elder Watts said. “He ain’t been in no trouble with the law or nothing like that, but the way it’s portrayed it’s like he’s been in trouble. They’re misusing his picture.”

To his son, the racial undertones of Trump’s ad were obvious and unwelcome.

“I’m a Black male,” the younger Watts said. “I literally go around getting looked at like that all the time. That’s everywhere you go, that perspective. The world has been looking at me like that, it’s just now I’m on a commercial.”

Wade, the other videographer, has also been working on projects related to the Tulsa race massacre. While he disavows the Trump ad, he’s an ex-felon who does feel there’s truth to the message that Biden bears responsibility for passing laws that fueled mass incarceration. Still, he’d prefer to cast his ballot for an independent candidate — not Trump.

“As far as the whole election, I don’t rock with either of the candidates,” Wade said. “There’s just too much history on both sides. In my opinion, it’s Trump just being who he is — a great businessman, but a shitty politician, shitty when it comes to how he treats people.” 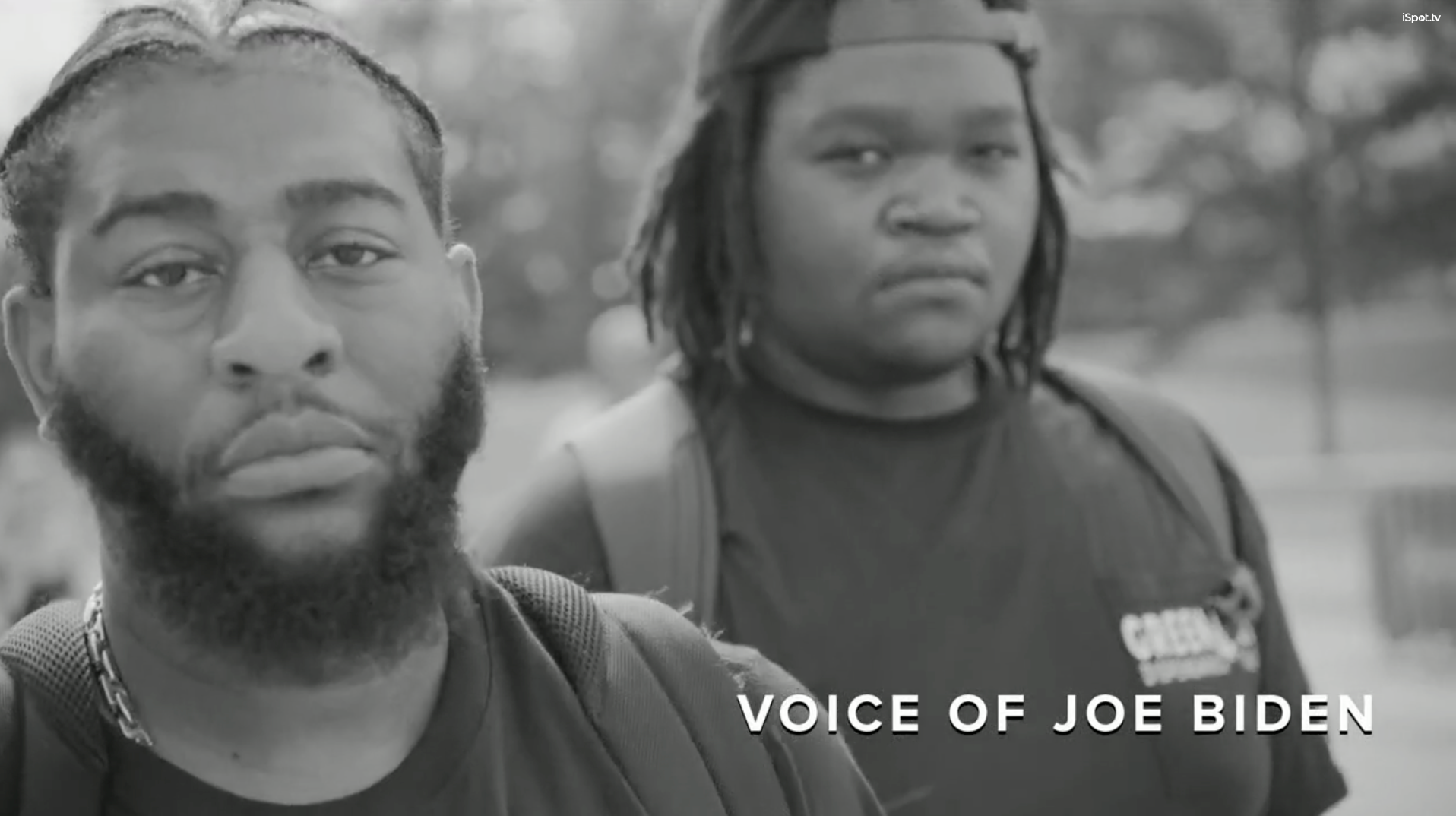