ATLANTA — Ryan Lynch, 41, never cared much about elections. “I didn’t think it mattered,” he said, standing outside a polling location on Election Day waiting for his wife, a first-time voter, to cast her ballot.

A week earlier, Lynch had also voted for the very first time in his life, motivated, he said, by Trump’s handling of the COVID-19 pandemic.

“For me to get out here and vote, you know it’s serious. We need some kind of change. Not even change but somebody that cares,” said Lynch, who is Black and voted Democrat straight down the ticket. “I don’t even know if my vote is going to make a difference, but you know what, I’m going to go see.”

First-time voters like Lynch and his wife have indeed made all the difference in Georgia, propelling a stunning political shift in the state from reliably Republican to fertile battleground for both parties. But the groundwork for this change has been years in the making, as voting rights activists and Democrats changed their strategy in Georgia to focus on mobilizing young people and people of color to loosen Republicans’ stronghold on the state.

Heading into a likely recount, Biden leads President Donald Trump by 7,248 votes. Georgia also holds in its hands the balance of power in the Senate, as its two seats are headed to a runoff in January. In both elections, democratic challengers denied Republican incumbents the 50 percent threshold they need to win, as required by Georgia law. The runoff will test the Democrats’ political machine and ground-game without President Trump on the ballot to motivate voters.

The mere fact that the races are this close is a nightmare scenario for Republicans while thrilling Democrats—fulfilling their long-held dream of making the state competitive.

If Biden wins Georgia, he would become the first Democrat to carry the state since Bill Clinton in 1992, and only the third since 1980, when Georgians favored hometown candidate Jimmy Carter. (Carter was defeated by Ronald Reagan.) But, perhaps more importantly, it portends a broader shift in the country’s political landscape, depriving the Republican party of 16 reliable electoral votes, and providing a blueprint to Democrats for flipping other southern states long regarded as lost causes.

“The south for a generation has been the base on which the Republican party builds.”

“The south for a generation has been the base on which the Republican party builds. If Democrats can start chipping away at Republican hegemony in the south then they make their path to the White House and controlling Congress much easier,” said Charles Bullock, a political science professor at the University of Georgia. “For years, Florida has been the beauty queen of toss-up states. We don’t have as many electoral college votes to bestow upon our suitor but it seems like we are more competitive.”

The vote count in Georgia was high drama, punctuated by a burst pipe on Election Day in the state’s largest polling location. Early returns showed Trump leading by more than 100,000 votes. But as counties started processing absentee ballots, Trump’s lead was slashed in half, and eventually fell to less than 2,000 by Thursday evening. Biden took the lead Friday morning at 5 a.m. as the state processed absentee ballots from Clayton County, the most Democratic in Georgia. The Clayton absentee ballots favored Biden by around 87 percent.

Democrats found some poetic justice in the fact that it was Clayton that pushed Biden into the lead: it was represented by the late Congressman John Lewis, the iconic civil rights leader and fierce critic of the president.

Georgia paved the way when it comes to voter suppression—or protecting against fraud in elections—depending on which political party you ask. In 2005, it became the first state in the country to require voters to show government-issued identification at the polls. In protest, Black lawmakers staged a walkout from the Capitol.

A pointed effort to register and mobilize voters of color started a few years later. In 2011, Stacey Abrams became state house minority leader. She began laying the groundwork for a new election strategy, said Democratic state Sen. Nan Orrock, who has served in the Georgia legislature for 33 years.

“Stacey came with a new plan, which was to reach out to all of these Georgians that had not been engaged and to massively mobilize communities of color to vote. Before that, the Democratic focus had really been this pipe dream of ‘let’s keep wooing these white voters back from the Republicans,” Orrock said.

In 2014, the Democratic candidates for governor and U.S. Senate indirectly backed efforts to register people of color, unmarried women and young people—groups that tend to favor Democrats. But it wasn’t their main emphasis. Both candidates lost handily.

Still, rapidly shifting demographics in Georgia played in the Democrats favor. The state’s population has grown by almost 10 percent in the past decade, from 9.7 million to 10.6 million residents, and a huge part of that population growth has been driven by the Black, Hispanic and Asian American communities. Georgia is on the cusp of becoming a majority-minority state: Its population is now 48 percent nonwhite, up from 44 percent in 2010.

Abrams put her strategy to the test in 2018, running for governor against then-Secretary of State Brian Kemp. She narrowly lost, but her candidacy showed the potential of her strategy: Latino turnout tripled, while the African American vote increased by 40 percent, according to the voting rights organization she founded. She won more votes than any Democrat ever had running for a statewide office.

Abrams never conceded; she says the race was stolen from her. Prior to the election, Kemp removed 560,000 Georgians from the polls—8 percent of the state’s registered voters—because they had skipped too many elections. Kemp said he was safeguarding the election against fraud.

He also pushed through an “exact match” law, which suspends a person’s voting status if the names on their government IDs don’t exactly match their names on voter rolls, including hyphens and accent marks.

Days after the election, Abrams founded the group Fair Fight, which has raised millions of dollars for grassroots efforts to register and mobilize new voters. Since 2018 alone, 800,000 new voters have been added to Georgia’s voting rolls, of whom 45 percent are people of color and 40 percent are younger than 30, Abrams told a coalition of liberal activists on Wednesday, according to The Washington Post.

Abrams didn’t respond to a request for comment. In August, she told VICE News that voting is the path to creating permanent change. “This is about power. And power is not going to concede. It’s not going to walk away,” she said. “But if we abdicate the system, if we say nevermind, it’s never going to work, then evil gets to stay where it is and it gets stronger.”

Orrock also attributed the failed bid by Jon Ossoff—one of the current Democratic candidates for U.S. Senate—for Congress in 2017 as having a major impact. The special election generated national attention, becoming a proxy of sorts for national political battles. Ossoff lost with 48 percent of the vote. But the closeness of the final tally underscored that the Atlanta suburbs were no longer the bastion of Republican support that they had once been.

“That spark lit a prairie fire among women in the suburbs. It demonstrated that when you go out into those suburbs that have been considered Republican areas, there is a whole Democratic vote out there that is waiting for someone to come mobilize them,” Orrock said.

One year after Ossoff’s loss, Democrat Lucy McBath won the seat, narrowly defeating the Republican incumbent. She won re-election on Tuesday by 54.6 percent. In the adjacent congressional district, Democrat Carolyn Bourdeaux eked out a victory after losing in 2018.

These elections showcased Georgia’s potential to flip for Democrats in a presidential election. Then again, that had been the rhetoric about Georgia since 2012, and it had never lived up to the potential. Trump won in 2016 with a five percent edge.

But the excitement revved up again as polls showed Biden and Trump in a virtual tie. Democratic activists made campaign calls, leafletted neighborhoods, and occasionally knocked on doors, pandemic be damned. Hip-hop and R&B stations blanketed their airwaves with get-out-the-vote-messages and ads for Democratic candidates. Biden, Sen. Kamala Harris, and former President Barack Obama all made last-minute visits to the state.

The years of work and last-minute push paid off. Of 7.2 million registered voters, nearly 5 million cast a ballot, up from 4.1 million in 2016.

“People still think of Georgia as almost antebellum. When that’s not who we are,” said Tammy Greer, a political science professor at Clark Atlanta University. “For the past 12 years Georgia has quietly been creeping” toward becoming more competitive.

Already, Georgia’s turn blue has Democrats wondering if they can mirror its strategy in other deeply Republican southern states with substantial Black and Latino populations. In Mississippi, non-whites comprise 43 percent of the population; in Louisiana 41 percent.

“You need someone to be that leader. And Georgia is that leader in the southeast,” Greer said. 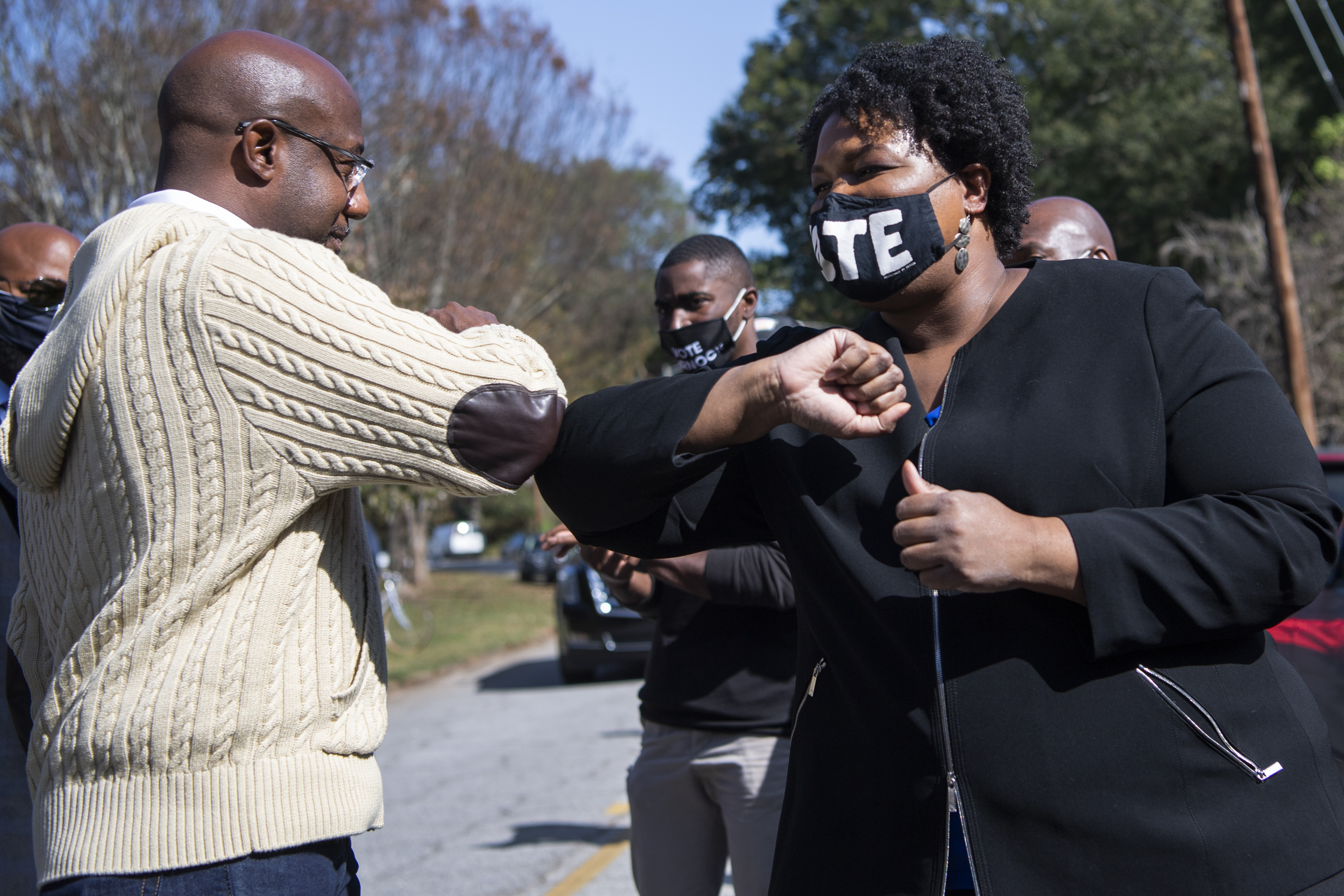 Coronavirus Is Now a Pandemic In All But Name