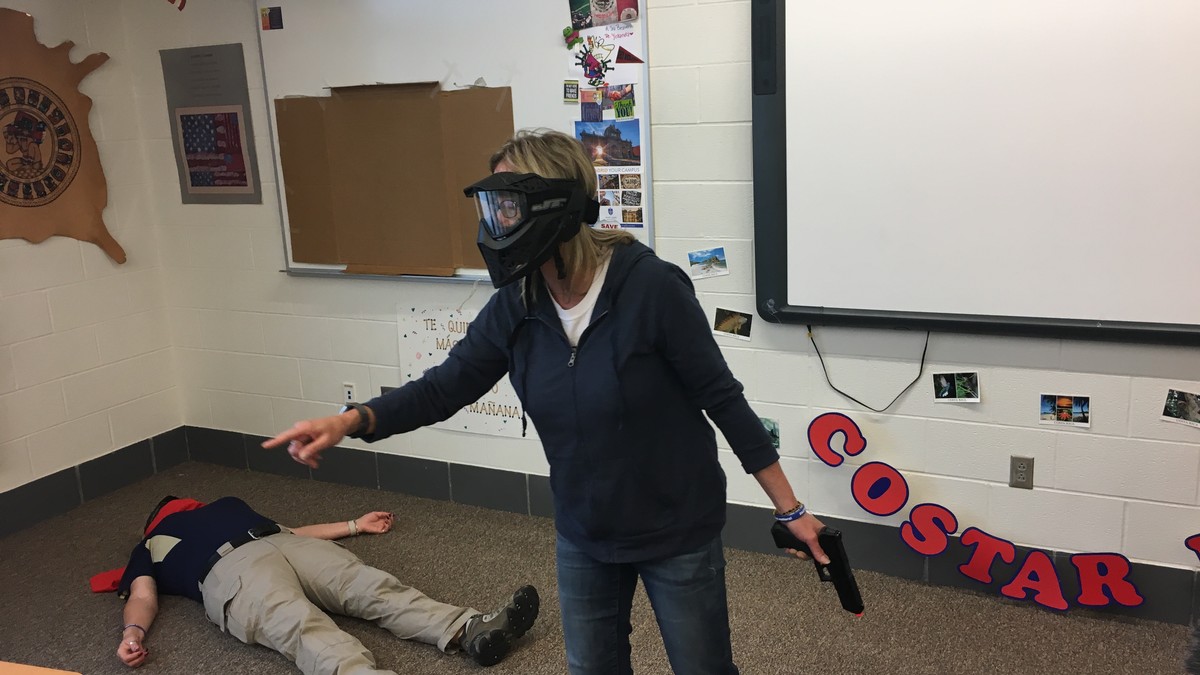 This first installment of “Armed,” a three-part miniseries in our weekly podcast VICE News Reports, looks at the movement to arm teachers, and who decides what it means to be safe in a school.

RITTMAN, Ohio — It’s a hot day in Northeast Ohio and I’m sitting in a makeshift classroom on a police firing range. Outside, a row of fresh targets is getting soaked in the rain. Inside, police officer Chris Cerino is pacing from desk to desk, picking up and checking out his students’ unloaded guns.

For these 21 students, this class is something of a reversal. All of them work in schools—as principals, bus drivers, secretaries, teachers—but this time, they’re the ones getting an education. They’re here to learn how to carry guns in their schools, to prevent or end a school shooting.

“The job you’ve volunteered for, it is not clean and neat, and it’s not PC,” Cerino tells the class. “We’re talking about potentially shooting young people.”

A slight woman in her 30s, her blonde hair under a baseball cap, is nodding along. Angie is a 4th-grade teacher, sitting at a desk with her polka-dot lunch bag, a box of ammo, and a can of Diet Coke.

“We’re talking about shooting not only young people, not only women or elderly people,” Cerino continues. “We’re talking about killing another human being, which is not normal for us. It’s not built into our DNA. It’s not something that’s natural. If you’re not just a little bit sick and twisted, this is probably not the job for you.”

Angie had never touched a gun in her life until a month ago. But of her school’s roughly 45 staff members, 15 of them are already carrying concealed guns, and Angie wants to join them.

“I know when it was talked about, there was a lot of controversy,” Angie tells me. “Oh, guns, school, you know: It could go off, there could be an accident. I was instantly like, yes, I was all for it.”

This year teachers and parents are grappling with “school safety” primarily as a public health issue during the pandemic, but the fear of school shootings — and the security protocols adopted to try and prevent them — remain.

The idea of arming teachers to prevent school shootings burst into the national conversation after Parkland, when President Trump raised the possibility in listening sessions with grieving parents. Shortly after the 2018 shooting at the Florida high school, he told attendees at the 2018 CPAC that as many as one out of every five teachers should be carrying a gun.

It provoked an uproar. But often lost in the bluster of that moment was the reality that teachers had already been carrying guns in U.S. schools for over 10 years. Trump had just become the policy’s highest-profile advocate yet. The first serious proposals to arm teachers cropped up after the Columbine shooting in 1999, and the first school district to announce such a policy was in Harrod, Texas, in 2008, after Virginia Tech.

The decision to let schools arm teachers is left to state governments. Since the 1990s, 19 states have passed laws and created programs to arm some teachers and other school staff, like principals or superintendents. In 24 states, school boards have the discretion to authorize anyone of their choosing to carry a gun on campus. A 2019 investigation by VICE News found that in the year after Parkland, the number of school districts arming their teachers more than doubled, from around 215 school districts to nearly 500, encompassing hundreds of thousands of students.

President-elect Joe Biden has said he strongly opposes arming teachers, but because it’s up to state legislatures—which stayed resoundingly Republican this election, including in armed-teacher states like Florida, Texas, Ohio, Missouri, and Utah—it’s a policy that may be here to stay.

What we know about these armed teachers and school staff is often limited. Many schools, like Angie’s, keep the identities of armed teachers secret. School security plans are confidential, not subject to right-to-know requests. So when I realized nearly two years ago that arming teachers was not an abstract policy debate but a real security plan in hundreds of school districts, I set out to try and learn as much as I could.

That reporting has taken me to a school in Ohio that had a shooting, and then armed some of their staff, over the objections of the shooting’s victims. It took me to Florida, where the state legislature passed a law after Parkland that requires every school in the state to have someone armed at all times.

And it took me to this classroom on a police firing range, where a pro-gun lobbying organization called the Buckeye Firearms Association runs trainings for teachers and school staff who want to be armed. They claim to have trained over 3,000 staff members from 18 states. On the last day, students run school shooting scenarios in an actual high school, firing Airsoft guns at “bad guys,” always shooting to kill.

But first, they learn a mindset, to embrace what police trainer Cerino calls “the gift of fear.”

“We have to be violent. We have to be prepared to commit violence,” he tells the students. “Be polite, be professional, but have a plan to kill everyone you meet.”

To hear more about the past, present and future of arming teachers, subscribe to VICE News Reports and listen for the next episodes of “Armed.”

How To Pick The Best Personal Injury Lawyer For Your Case

Coronavirus Is Devastating Homeless Shelters Across the Country