Tipping Point covers environmental justice stories about and, where possible, written by people in the communities experiencing the stark reality of our changing planet.

In August, towards the end of a summer marked by powerful racial justice protests after the police killing of George Floyd, Squaw Valley Ski Resort near Lake Tahoe in California announced it was going to change its name. For decades, the Washoe Tribe in Northern California, whose ancestral land covers the ski area and the surrounding region, have been fighting to remove “squaw,” a derogatory term for Indigenous women.

“We have to accept that as much as we cherish the memories we associate with our resort name, that love does not justify continuing to use a term that is widely accepted to be a racist and sexist slur,” the resort said.

The decision was welcomed by the Washoe Tribe, a rare win in an industry not designed for or with them, but often on their ancestral lands.

“We no longer have that thorn in our side,” Darrel Cruz, director of the Historic Preservation Office for the Washoe Tribe of Nevada and California, told VICE News. “It speaks a lot for the tribes across the nation as well with similar names within their areas.”

Yet when the ski area opened Wednesday, it still bore the name Squaw Valley. A “renaming project team, headed by resort leadership” began the process of selecting a new name “immediately” after their August announcement, according to the resort, but it does not plan to reveal the new name until early 2021, in time for the next ski season.

So far, the Washoe Tribe has not been consulted in the new name selection. “I’m not trying to force anything upon them. But if they invite us to give a name, we can do that,” Cruz said.

While the name change is an important first step, most ski resorts in North America were developed on Indigenous lands without the consultation of local Indigenous communities. As the climate changes and ski seasons shorten, more needs to be done as the resort industry reckons with its problematic legacy.

“There could be potential burial grounds that are being snowboarded on.”

“It may be fun and games going down the slopes, but in some cases, there was no consultation or cultural surveys on some of these resorts. And there could be potential burial grounds that are being snowboarded on,” Josh Mann, director of Eastern Shoshone Historic Preservation Office in Wyoming, told VICE News.

Although many ski resorts have been outspoken about supporting climate change legislation, it is still an industry that uses enormous resources—notably water and energy to make artificial snow because of shorter “natural” winters—to serve a clientele that is primarily wealthy and white.  In the 2019-2020 ski season, 88 percent of U.S. ski area visitors were white, and in 2017, over half of skiers had an annual income of more than $100,000. Most of those clients arrive on airplanes—one of the biggest contributors of greenhouse gas emissions.

These privileged few are often unaware that the slopes where they love to ski and snowboard have special significance for nearby Indigenous communities.

San Francisco Peaks near Flagstaff, Arizona, are sacred mountains for 13 different tribes, including the Hopi Tribe, Navajo Nation, Havasupai Tribe, and Pueblo of Zuni. The peaks are also home to Arizona Snowbowl, a ski resort that uses wastewater to make fake snow. In 2018, the Hopi Tribe, who argued that the wastewater tainted the sacred mountains, lost a decades-long court battle when the Arizona Supreme Court ruled that the Hopi cannot make a public-nuisance claim against using wastewater at a public resort.

But things are slowly changing.

Beyond the name change, Cruz is working with the Northern California resort to develop several other initiatives, like allowing Washoe Tribe members to use resort facilities to access cultural sites situated atop the ski mountain, and involving local tribal youth at the ski area.

“They are taking a step in the right direction: to acknowledge that the Native people have utilized these places for thousands of years,” Cruz said. “Ski resorts have made a lot of money off of these places.”

In recent years, the Eastern Shoshone Tribe has also been able to coordinate consultations between elders and business executives. Near Pinedale, Wyoming, the Historic Preservation Office led a project to protect and maintain a sacred prayer altar right beside a lift gate.

“Prior, there was no awareness that the whole area was a cultural site,” Mann said. “Nowadays we at least get acknowledged. We get phone calls. Our words are least recorded, and we can do mitigation strategies for preserving our sacred sites.”

I grew up in Aspen, Colorado, the traditional homeland of the Ute people. Despite the fact that Aspen used to be called “Ute City,” it was not until writing this story that I learned which band of Ute lived on this land—the Uncompahgre. For a long time, much of that history wasn’t taught, and instead, we learned about how the U.S. Army’s 10th Mountain Division “saved” the dying town after the Great Depression and developed the ski resort.

In parts of Colorado, history is slowly being corrected.

In the southwest, the Telluride Institute, an environment and sustainability nonprofit, created the Ute Reconciliation project in 2015. As part of the initiative, San Miguel County, home of Telluride Ski Resort, issued a formal apology to the Uncompahgre Utes, who historically lived in the area until they were forcibly removed in 1881.

As part of the Ute Reconciliation, the Telluride Institute worked with Telluride Ski Resort to create a youth skiing program in 2017, which funds equipment rentals, ski instructors, guides, lift tickets, and accommodation for young people from the Ute Mountain Ute and Southern Ute tribes.

“Many of us have never been on skis.”

Regina Lopez-Whiteskunk, a member of the Ute Mountain Ute Tribe and a board member for the Telluride Institute, worked with the tribal chair to advocate for the creation of the program geared toward Ute youth, some who live on reservations far removed from their traditional mountain homeland.

“Many of us have never been on skis. We want to expose the youth to an activity in the mountains to help them get reacquainted with the area—the traditional homelands of our people,” Lopez-Whiteskunk told VICE News.

Reconciliation can even play a role in mitigating the climate crisis on ski resorts. Indigenous peoples have land conservation and management philosophies that will be valuable as the climate changes, winters shorten, and mountain resources become more limited.

In Canada earlier this year, Ktunaxa First Nations finally found a way to stop the construction of Jumbo Glacier Ski Resort, which, at 15,000 acres, would have been the largest and highest resort in North America. The resort would have sat on sacred land.

“We felt it was just going to make too much of a footprint,” Kathryn Teneese, chair of Ktunaxa Nation Council, told VICE News.

For years, Ktunaxa Nation tried to appeal the ski resort development through the court system in Canada. The case went all the way to the Supreme Court but was ultimately unsuccessful.

“I was a little bit concerned that our court, our Supreme Court of Canada wasn’t able to make that connection between a place and spiritual beliefs,” Teneese said. “I don’t think that what we were arguing was anything different from other spiritual beliefs. I mean, there’s Mecca. There’s the Vatican.”

But in January Ktunaxa Nation received a different kind of victory: the approval to create an Indigenous Protected and Conserved Area in Purcell Mountains, including Jumbo Valley. As a result, the Canadian government, the Nature Conservancy of Canada, and private enterprises (including outdoor retail company Patagonia) made contributions that allowed the purchase of the land tenures from Glacier Resorts Ltd and others. Ktunaxa Nation will oversee stewardship of the land.

“We now have an opportunity to work with our neighbors and work with other folks who are interested in moving forward and ensuring that there are some areas protected for future generations,” Teneese said.

Although there will be no permanent structures, such as lift towers or condos, people can still enjoy the activities like backcountry skiing in the area’s wilderness.

“We’re encouraging people to experience the place in its natural way,” Teneese said.

Sophie Stuber is a freelance journalist based in Paris, France, where she covers the environment, human rights, and the intersections between climate change and migration. Follow her on Twitter.

Have a story for Tipping Point? Email TippingPoint@vice.com 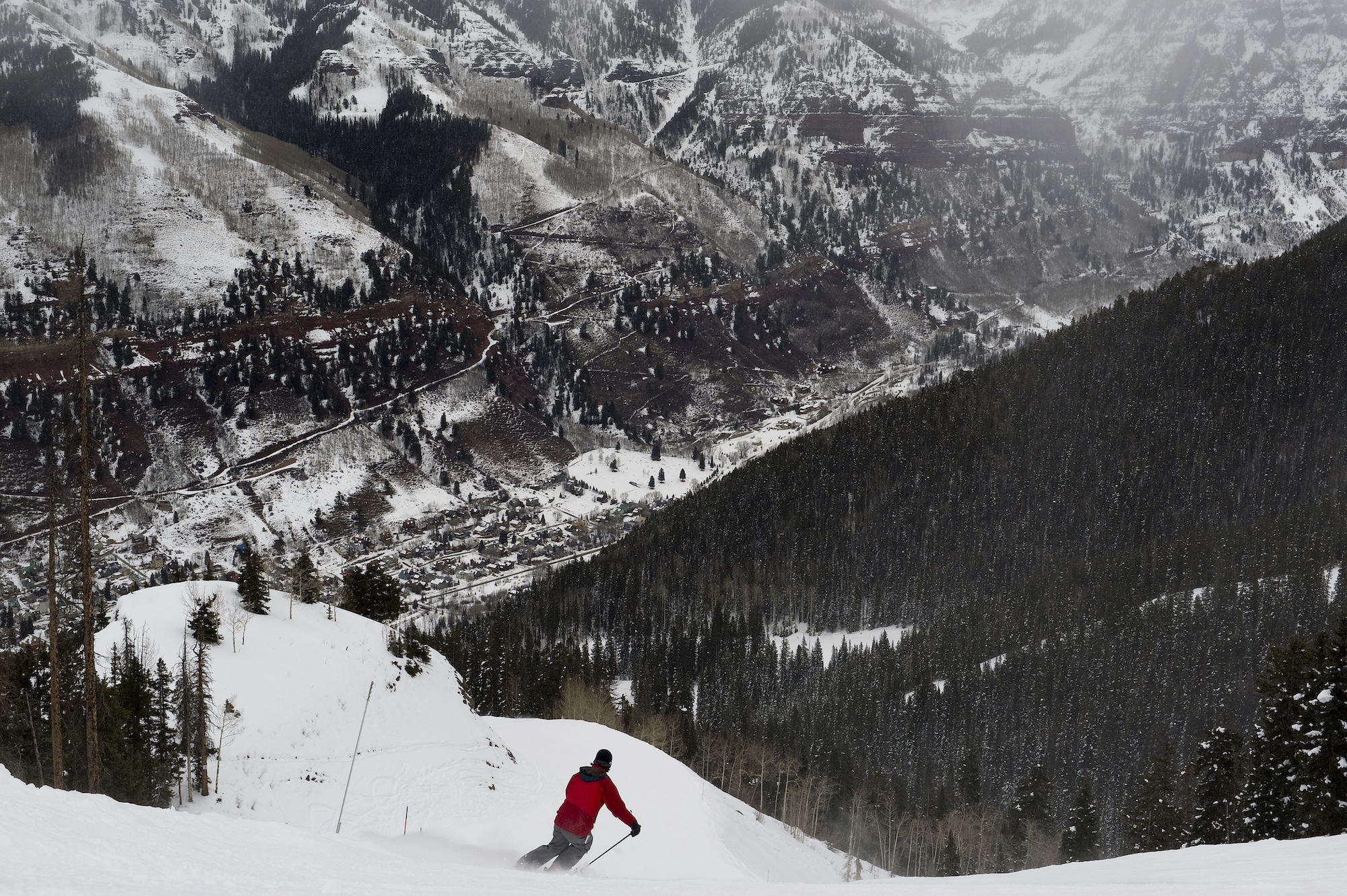 4 Facts You Should Know About 3D Laser Scanning

The Greatest Gift Guide for The Holidays