Since 1962, as the holder of the Royal Warrant by Appointment to Her Majesty Queen Elizabeth II,  the House of Hine has been the only official cognac to the British monarchy.

Now run by the Hine family’s sixth generation, the latest release in The House of Hine’s Bonneuil single-estate Cognac series is its 2010 expression made from Ugni Blanc grapes. The mandarin-forward with wild peach Cognac is considered ‘one of the very best vintages of the last 10 years as it shows a full concentration and delicacy after being left to mature for almost a decade’.

Grapes are harvested from the Grande Champagne limestone terroir of House of Hine’s vineyards in the village of Bonneuil.  Eighteen casks,  each containing 450 bottles of Domaines Hine Bonneuil 2010, were bottled on 21 July 2020, each one numbered. 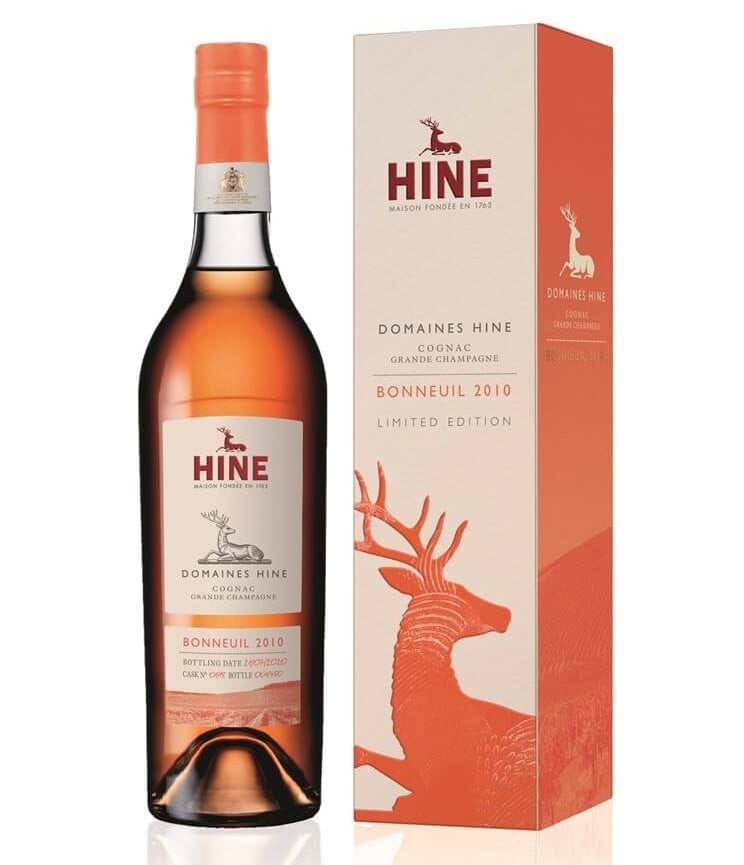 In 1791, a sixteen-year son of a linen merchant set out from the family home in Dorset to learn about cognac in Jarnac. After marrying a negociant’s daughter, Françoise-Elisabeth, in 1817, Thomas Hine gave his name to the house, established on the banks of the Charente in 1763. Its tasting rooms are still at 16 Quai de l’Orangerie, and cellar master Eric Forget is in charge of the H. of Hine’s unique early landed vintages, which are sent in the cask the United Kingdom to be matured in very different temperature and humidity conditions to those found in French cellars.

Says Forget: “This twenty-year cross-channel sabbatical infuses the Eaux-de-vie with a mellow, more delicate patina imbued with aromas of candied orange and gingerbread. Comparing the same vintage aged in Jarnac and the United Kingdom is always an astonishing experience, so distinct are their flavors”.

He adds about the Grande Champagne early landed first appeared in `1975: “ Paradoxically, maturing on the other side of the Channel brings a bouquet of exceedingly ripe tropical fruits: passion fruit, tangy melon, and mango freshly fallen from the tree. This cognac evokes warm and diffuse sunlight rarely encountered on British soil!

“Unlike its Jarnac-aged counterpart, the 1986 vintage matured in England is the epitome of softness. Notes of fresh vanilla, mountain honey, iris, and white cedar form a subtle harmony, lingering lazily on the palate.”

“The House of Hine” also makes Rare VSOP, Antique XO ( to commemorate the company’s centenary), Cigar Reserve, and Triomphe created in 1888 to celebrate the triumph over the Great French Wine Blight.

Boohoo lockdown sales boom thanks to tops and joggers